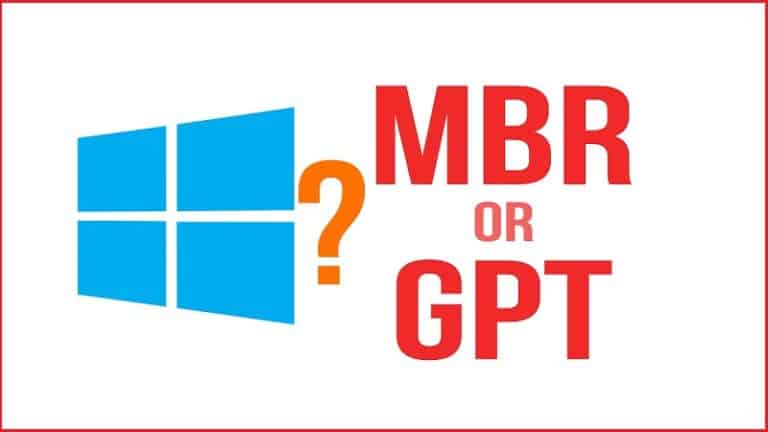 In the topic of hard partitioning, two types of partitioning give us different access to installing software and using drives, which include MBR and GPT, in general, and simple mode; MBR has limitations regarding the use of the capacity of drives and software, but it is still used, and on the contrary, GPT will give us more access to drives and software.

Before we explain the partitioning modes, it is better to know how many types of drives can be created in one hard drive.

You can create three types of drives with the following names on the hard drive:

If we divide primary drives into several parts, logical drives are formed.

In the term, we also call all logical drives extended.

What is the MBR and GPT format partition mode on the hard drive?

The most standard and, of course, the oldest mode of hard disk partitioning is the use of MBR format, which is still used due to the limitations of partitioning with MBR format, for the reasons we will say; When partitioning in MBR mode, you can create four types of primary drives, and if you bought a type of hard drive that has a capacity of more than 4 TB, you could only use 2 TB of the hard drive’s capacity. You have to say goodbye to the remaining 2 TB of capacity.  so pay attention to this when buying a hard drive; This means that the MBR format on the hard drive only supports up to 2 TB of memory.

Also, you can use 32-bit and 64-bit versions of Windows in MBR format. The limitations in some computer systems make you unable to use the GPT format for partitioning, and you have to use the MBR mode for partitioning. For the first example: if your computer’s RAM is three gigs or less, You must use 32-bit Windows, in which case you only have to use the MBR format because you can only use the 64-bit type of Windows in the GPT format.

Note: If your system has 3 GB of RAM or less, you cannot convert MBR format to GPT format.

In MBR format, the information related to partitioning and booting of the operating system is only stored in the first (Sector), i.e., the first house of the hard drive memory, and if this part has a problem, You have to change your Windows, and most likely the data will be deleted from the drive; On the other hand, it is more difficult to recover data from an MBR format drive than GPT, and for this reason, you have to have a backup copy of the data or information in the operating system drive.

The GPT format is newer than the MBR format, so, naturally, it has fewer restrictions than the MBR format. In partitioning with the GPT format, you can create up to 128 types of primary drives, and you have no restrictions, of course, because Windows drives are limited to letters. The alphabets are English. You cannot partition 128 hard drives in the operating system.

Important differences between MBR and GPT

The MBR format can create four primary drives, each of which becomes a logical drive, but in contrast to the GPT format, it can have up to 128 primary drives.

3. You can access 32-bit and 64-bit Windows using the MMR format, whininess the 64-bit version of Windows in the GPT format.

5. The reliability factor in partitioning with GPT format is much higher than an MBR format, and the risk of data loss is less in GPT.
Fixing the limitation of installing Windows in MBR format hard drive

It was mentioned in the previous section that you cannot create more thfourn four primary drives to install Windows in MBR partitioning mode! In this discussion, a question will arise, how can some systems with MBR format install the operating system on the logical drive?

Microsoft Windows was able to solve this problem after releasing updates from Windows 7 onwards; On the basis that when installing the operating system in logical drives; The boot files of the operating system are placed in the primary drive, and for this reason, you can install several operating systems that are partitioned on the hard drive in MBR format.

MBR or GPT? Basic differences between MBR and GPT

When connecting your drive to Windows, you must choose between MBR or GPT. But there is always the question of choosing between MBR and GPT.

The first thing you should be aware of is that even though GPT is newer and newer, it cannot be ignored that sometimes the need for MBR is still felt.

Comparison of MBR and GPT in terms of partitioning

If we want to define a partition briefly, we must say that a partition should be considered a part of the drive that stores data. Nothing can be stored on a drive without a partition, so you always need at least one partition.

Partition helps to separate drives when we have only one physical drive and have a dedicated drive letter for each partition.

This method has a limitation: logical partitions cannot be used as boot volumes. (boot volumes are a type of partition used to maintain Windows operating system files).

In GPT, you do not face this limitation and can have up to 128 partitions on one drive without needing logical partitions.

Of course, you should pay attention to the fact that you cannot have more than 128 partitions in the Windows operating system, but there is no such limitation in other operating systems; However, in practice, there is a very low probability that you will need this many partitions.

Comparison of MBR and GPT in terms of capacity

You probably know about SSD drives and know that they are more expensive than their competitors, and there is a huge price gap. This price difference, like the difference in available capacity for consumer SSDs, is decreasing.

You can buy a high-capacity SSD hard drive if you are not limited by budget.

The issue we need to raise is that both MBR and GPT have their limitations, and ultimately, the drive capacity is an important factor in your choice.

MBR can only be used for 2TB drives; anything larger than 2TB is redistributableble and unusable.

It is possible to support GPT up to 64 bits, and with GPT format, you can use up to 9.4 zettabytes of hard drive capacity. To understand zettabytes well, the number one with twenty-one zero bytes is 1024 exabytes or one trillion gigabytes.

If we want to look at these numbers logically, we realize that GPT has no limitations in the real world; You need to buy the drive with the capacity you want and leave the rest to GPT to use all its space.

Comparison of MBR and GPT in terms of recovery

MBR stores all the information in the partition and boot in one place, and finally, if a minor error occurs, the whole work will be disrupted or completely disrupted.

You will notice the problem with the MBR data when the system does not boot, and, unfortunately, we have to say that the recovery of MBR drives will not always be successful.

The superiority of GPT is more pronounced in this case because it stores copies of the boot data in multiple partitions. This method makes it possible to use other partitions for recovery if one partition encounters a problem.

Another advantage we can say about GPT is that GPT has an error detection code that will evaluate the partition tables at boot time and make the existing errors visible.

Once the errors are detected, GPT can easily fix the problems.

Comparison of MBR and GPT in terms of compatibility

There are intermediaries called BIOS and UEFI that perform the task of booting your device. Both of these mediators have a common goal, but they also have differences from each other.

The main difference that we can consider is the age of these two. BIOS is older and has been around since the eighties, but newer systems that have hit the market since 2010 mostly use UEFI.

Whether you use MBR or GPT depends on the medium your system supports.

Windows 7, 8, 8.1, and Vista 64-bit operating systems require a UEFI-based system to boot from a GPT drive.

Windows 10, 8, and 8.1 32-bit versions require a UEFI-based system to boot from GPT; One thing you should know is that Windows 7 and Vista 32-bit versions cannot boot via GPT.

Is MBR or GPT better?

If your drive has more than 2TB of memory, GPT is necessary, but this is not the case for SSD. In general, if we want to say GPT performs better in solving possible problems and errors and has better partitioning management.

In addition to all the above, GPT makes it different from MBR because it is newer and more standardized.

SSD and HDD are very different in terms of performance, and one of the most important advantages is that they boot Windows faster.

MBR and GPT indeed offer great features, but with that said, you need a UEFI-based system to get more speed.

GPT and MBR hard drive detection; Does your drive use MBR or GPT?

Identifying GPT and MBR hard drives is very simple, and for this, you need to press the Windows key + X simultaneously and click on the Disk Management option.

Among the various information on the page, in front of the Partition style option, you can determine whether your hard drive is GPT or MBR.

We hope this article has been useful and solved your partitioning problems. Do you think that the 32-bit version of Windows is still being used, and you have to use the MBR format and accept the limitations of the MBR format? You can write your opinion about this topic in the comments section; If you want to explain the correct partitioning method in the following articles in a very simple way, or if you have any questions about the content of this article, you can contact us in the comments section.