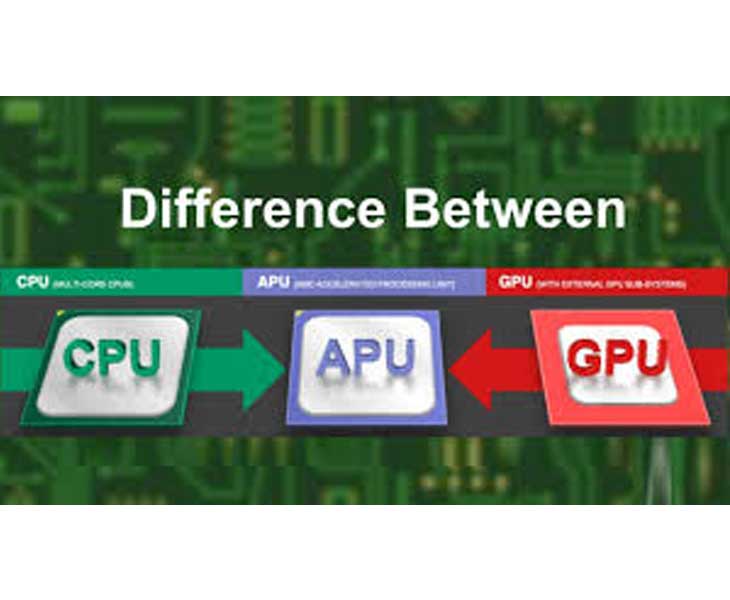 The Development Of The Hardware Industry And Related Technologies Has Led To Great Changes In Recent Years.

CPU, GPU, And APU, More and more powerful processors are coming to market every day, which provide much higher processing power due to more computing cores.

As a result, we see the release of more advanced smart devices, more powerful computers, and faster consoles.

Meanwhile, we feel the need for more different processing and graphics cores and wider applications with the advent of new devices. CPU, GPU, and APU are among these processing devices produced for different purposes and depending on users’ needs. In this article, we intend to introduce and examine the differences between these types of equipment.

What is a CPU?

The CPU (abbreviated Central Processing Unit) is a computing chip that acts as the brain of a computer. In fact, the CPU is the part of the computer that handles the actions, calculations, and execution of programs.

The CPU is one of the most important components of a computer system that determines the overall performance and efficiency of the system.

The CPU can control and perform the calculations and processing through its computational strings and cores. The greater the number of these cores and strings, the higher the CPU value. Today, most of the market CPUs under the AMD (AMD) and Intel ( Intel ) are produced.

What is a GPU?

A graphics processing unit, graphics card, video card, or GPU (Graphical Processing Unit) is a chip whose output is video and graphics. In fact, this is what we see on a computer monitor.

In fact, the GPU is a tool used to render (process and output) images in computer systems. This piece is the most critical piece of hardware for the visual quality experience of the game, which performs far more complex processes than the CPU.
NVIDIA flagship GPU, mainly by two companies (Nvidia) and AMD ( AMD ), has been extensively developed and produced.

What is an APU?

An Accelerated Processing Unit (APU) is a chip consisting of CPU and GPU components. This processing unit, first developed by Imedi, is an integrated system that, in addition to processing data, also has the ability to render graphic images.

The purpose of building an accelerated processing unit, or APU, is to connect the CPU and GPU chips quickly and easily. This led to high processing power and increased APU performance.

These processing units have a smaller physical volume due to their lower processing power and nature. Therefore, they are used in small and integrated devices such as tablets, phones, mobile computers, or portable consoles.