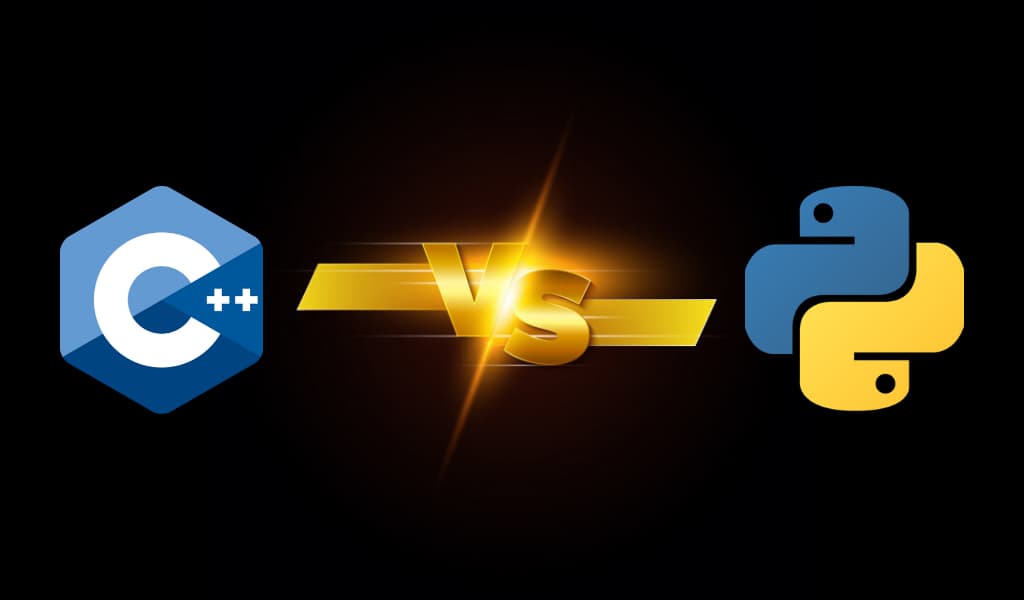 The discussion of Python vs C++ is an intriguing subject since both programming languages are very different in the context of their syntax, simplicity, use, and overall approach to programming. While both are great in their own right, the confusion between C++ and python has arisen for quite some time. Hence, people find it difficult when choosing which programming language to go for their software development needs.

Python and C++ both are the programming languages used for general purpose. But they differ from each other in many ways. While C++ is develop from C language with multiple paradigms. And provides compilation features, Python is one of the high-level programming languages. A variable can be used directly without being declared while writing code in Python. In C++, the single program needs to be compiled on every operating system that has to run the code. Python lets you ‘write once, run anywhere’ that allows the code to run on all the operating systems with Python installed.

A question that people who are starting are mostly interest in is if Python is easier than C++? The answer is yes, Python is more beginner-friendly, while C++ is a bit complicated, low-level language. It is mainly because C++ has more syntax rules and other programming conventions. While Python intends to mimic the regular English language. When it comes to their usability, Python is the best language for machine learning and data analysis, and C++ is a good option for game development and extensive systems. But let’s not jump the gun just yet and get into their detailed study before making any decision.

So lets have an Introduction about the Python vs C++

Python, a general-purpose, high-level programming language was create by Guido van Rossum in 1991. The underlying goal behind creating Python was its simplicity. Right now, it ranks as one of the simplest languages to learn – in fact it is closer to common English. Simplicity is what Python is known for, it utilizes a lot of whitespaces to make its code easily understandable, hence providing a pleasant experience to a Python developer.

Features like indentation help the code to be readable and appealing, and library functions make it very powerful, particularly for beginners. Another prominent feature of Python is that it is an interpreted language. Which means that the Python code is not convert to machine-readable at runtime. It also stars as a top language in IEEE’s 2018 Top Programming Languages. Suffice to say that is why python is so popular and easy-to-work hand in hand to make python a powerful and profitable language in the industry.

Introduced by Bjarne Stroustrup in 1979, C++ is also a high level, general-purpose programming language. It is an upgrade to C, which was initially known as ‘C with classes’. It was the first time Object-Oriented Programming was introduced in C. C++ is a general-purpose language usually used in the C++ software development with large and complex systems. This language is the most portable among other programming languages out there and preferred by top software development companies in India.

The main variation in the discussion of Python vs C++ is that the C++ source code needs to be converted into machine code. Python follows a different method as it is interpreted. The interpretation of code is usually slower than running code directly on the machine. Between these two languages, C++ is rather tough to learn. But despite posing learning difficulties, C++ programming features make it highly flexible that gives C++ developers substantial control over everything in the computer, even memory allocation, which is impossible to control in Python.

Difference between Python vs C++

One of the major factors for beginners is the ease of learning. If the programming language is hard, then it becomes difficult for the programmer to learn. The syntax of python is similar to English. Therefore, it is very easy to learn. On the other hand, C++ is based on the object-oriented concepts that deal with the memory allocation, if we write the wrong program in C++, then that can destroy the system also.

In C++, we need to allocate the memory to the new variables and deallocate the memory whenever the variable is no longer required. If we do not do so, then it can lead to a memory leak. Therefore, we can say that C++ does not provide inbuilt garbage collection and dynamic memory management. On the other hand, python provides the inbuilt garbage collection and dynamic memory management mechanism, i.e., it allocates and deallocates the memory on its own.

C++ has a complex syntax, which is difficult to read and write. It follows the programming rules like we need to use the curly brackets and semicolon at the end of the statement. On the other hand, python does not follow these programming rules. It uses the indentation rules, which are similar to the English; this indentation allows the programmer to understand the code more easily.

In C++, the function accepts and returns the type of value according to the definition, which is pre-defined. For example, suppose we have a function int add(int a, int b), then this function will accept only integer values as an argument and returns the integer type value. On the other hand, in python, there is no limitation on the type of the argument and type of its return value.

One of the perks for C++ programmers that are getting into Python is that learning it should be quite easy for them. Python follows simple conventions that are not too hard to understand in a considerably short time. However, when it comes to the subject of Python vs C++, learning C++ for Python programmers is different since C++ is more intricate, requires more contemplation and study.

Comparing Python and C++ leads to one conclusion: In terms of simplicity, Python is easier to use and has a great support system for AI and ML frameworks. With this conclusion, it’s also important to mention the performance of C++ as it is much faster than Python. After all, Python is an interpreted language, and it cannot stand up to compiled languages such as C++.