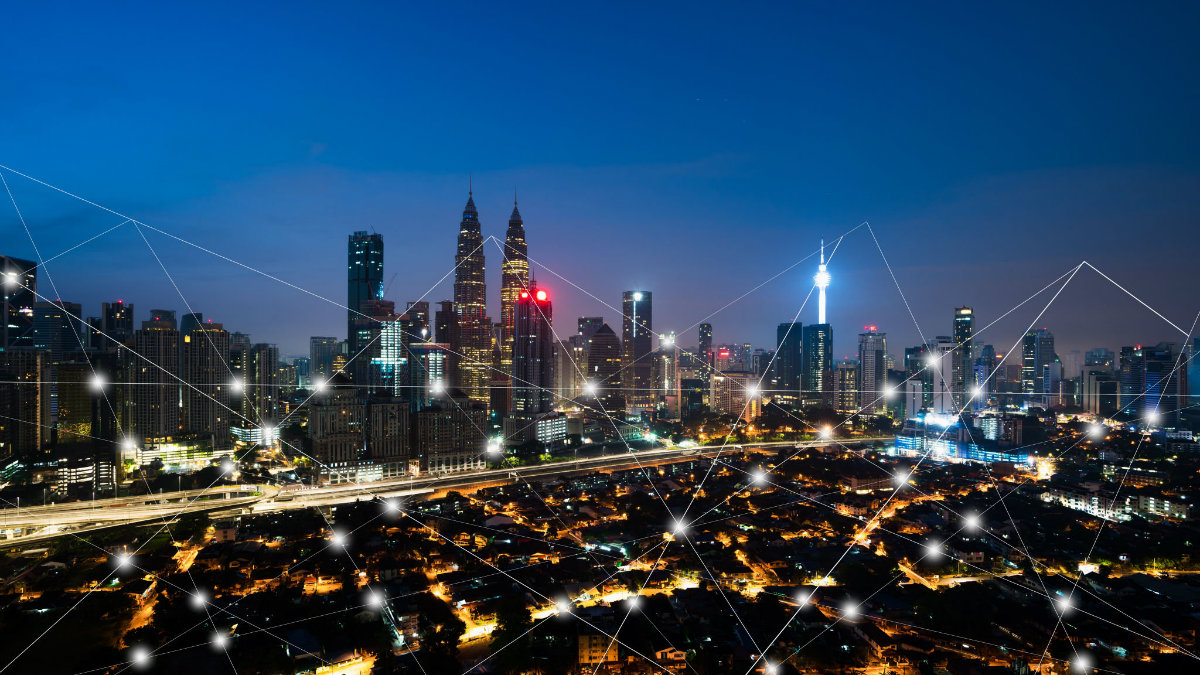 Welcome Back To The Series “Life In 2050”! So Far, We Have Discussed In Two Articles How Current Advances In Science, Technology, And Political Geography Can Be Widely Reflected In The World Of Warfare As Well As The Global Economy.

Life In 2050, however, we are shifting gears and examining how the ups and downs of the current century will affect people’s daily lives.

These factors cause the world to move in two opposite directions simultaneously. Rising sea levels, warmer summers, wetter winters, rising floods, droughts, pandemics, desertification, and freshwater shortages cause a host of different problems such as scarcity of resources, human rights crises, and increased mortality.

When climate change and technology are basically taking over our future, the main challenge will be to use one of these to influence the other.

In this way, we come to 5 issues that need to be addressed:

The growth of cities 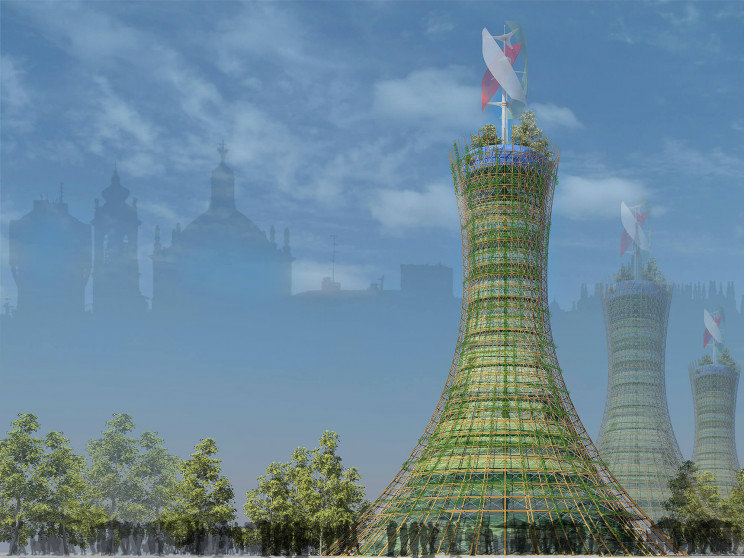 As we said in the second article, the planet’s population is expected to increase significantly by 2050. In fact, according to the World Population Outlook, compiled by the United Nations Department of Economics and Social Relations in 2019, the world’s population will reach 9.74 billion by the middle of this century.

In addition, a 2020 report by the American Environmental Institute shows that by 2050, approximately 68% of the world’s population will live in urban areas.

That means 6.6 billion people, which is 2.2 billion more than today’s urban population. Basically, it can be said that almost all of the population growth that is happening from now until 2050 will take place in cities.

As a result, we will see an increase in demand for housing, electricity, water, food, simple services, education, transportation, and medical services.

The infrastructure and resources needed to keep up with this level of demand will put more stress on the environment around cities, which are already under severe pressure and are deteriorating.

And if cities are good at just one thing, it is to provide a platform for innovation, new industries, and cultural outpouring. All of this is simply because people have gathered around each other.

As a result, cities by 2050 will be built (or rebuilt) to meet the simplest needs of their population in the most sustainable way possible.

This means that we must find ways to get more out of fewer resources and prevent the destruction of water resources as much as possible. But how is all this possible? Through a delicate art called … 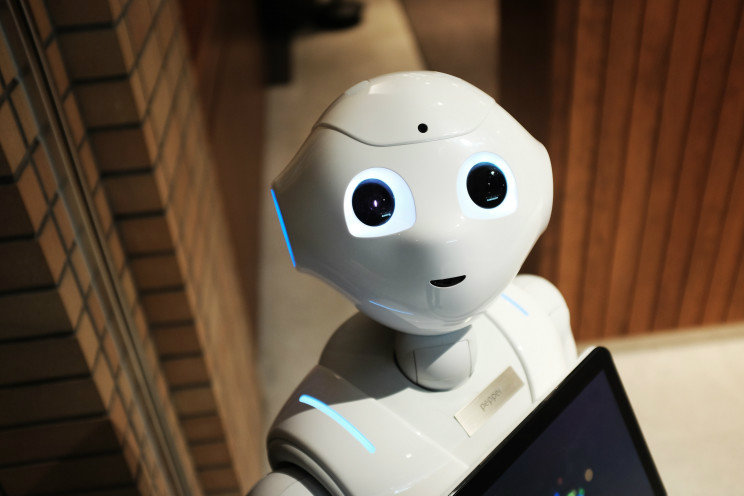 The idea of ​​”smart homes” is an idea that has received considerable attention over the last decade. This concept follows the idea behind “smartphones” and other smart devices that take a very accessible form wherever the Internet is.

In smart homes, one can access all the appliances in one’s home via Bluetooth or wireless internet.

In the future, this concept will reach a point where we will see the full realization of the Internet of Things (IoT). This is the concept behind which the digital world and the real world take shape differently than ever before.

On the one hand, we will have several trillions of devices and sensors that connect countless different parts of the world to the Internet.

On the other hand, people’s experience from the real world will be greatly influenced by augmented reality and virtual reality.

In addition to all this, the possibility of connecting to anyone and everything will create a revolution in the way we live our lives. And interestingly, many of us have experienced just that because of the recent Covid-19 pandemic, and we have a precise mindset of what the future holds.

People living through 2050 will be accustomed to being able to get almost anything at their doorstep.

At its simplest, people living through 2050 will be accustomed to getting almost anything at home. Door-to-door delivery services take on a highly automated form, and we will see the use of smart cars, shuttle pods moving on special routes, and drones in this industry.

Similarly, you can do anything in the comfort of your own home, especially when it comes to jobs. Equipping home offices with high-speed internet will become a soft thing; there will be virtual meetings, and no one will travel anywhere to work or attend various conferences.

Even education will take place at home or in separate apartment blocks.

Like distance learning, children will log in to virtual classrooms (and with the help of a teacher or artificial intelligence) to learn various lessons. Touch feedback technology will allow children to gain experiences very close to what they are learning, and no one will feel the need for physical presence in the classroom anymore.

By 2050, we expect to see explosive growth in the use of home robots. These robots can be either mobile units or a new generation of appliances that are integrated directly with a room.

These robots can handle almost anything, from housekeeping and laundry to food preparation and any other similar activity.

distributed systems in Life In 2050 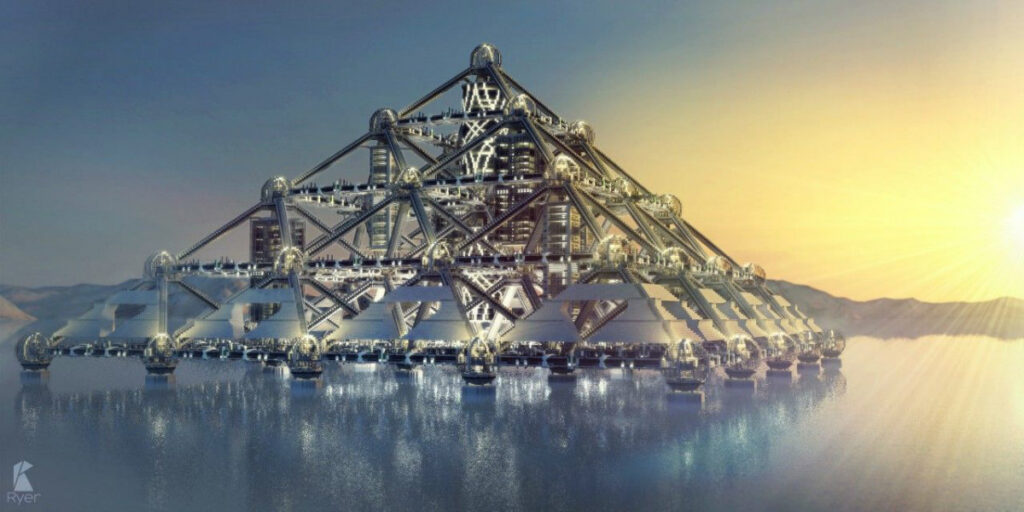 Another interesting change is how energy, money, products and services, and even governments, will be distributed in the coming years. While the Industrial Revolution led to the centralization of labor and the economy and has continued to this day, the world of tomorrow will be almost completely decentralized.

For example, in the previous article, we looked at increasing reliance on renewable energy and its impact on the global economy. Given that the greatest demand for electricity is in urban centers, we will see noticeable changes in how energy is produced and where it is generated.

In short, there will be no more centralized power grids in the future, and instead, energy will be generated more locally.

Today, the infrastructure that supplies electricity includes these interconnected elements:

The term “grid” is appropriate because electricity is generated at central points and then delivered through a grid to where it is needed.

Conversely, 2050 cities will have distributed power stations that rely on “green” energy sources such as solar, wind, piezoelectric, geothermal, biomass, and other options.

These indigenous centers generate energy for a specific area, and large buildings are likely to be powered by solar arrays, turbines, and biofuel generators.

However, power grids will not be destroyed, as the development of fusion energy and Tokamak reactors still require distribution centers.

Learning wireless internet, satellite internet, and blockchain technology also means that people can connect anywhere at any time. As a result, political meetings will resemble “town hall meetings,” virtual events that many more people will be able to attend. Similarly, video conferencing allows many businesses to carry out their tasks virtually, and we have to wait for this to impact local policies.

Green metropolises in Life In 2050 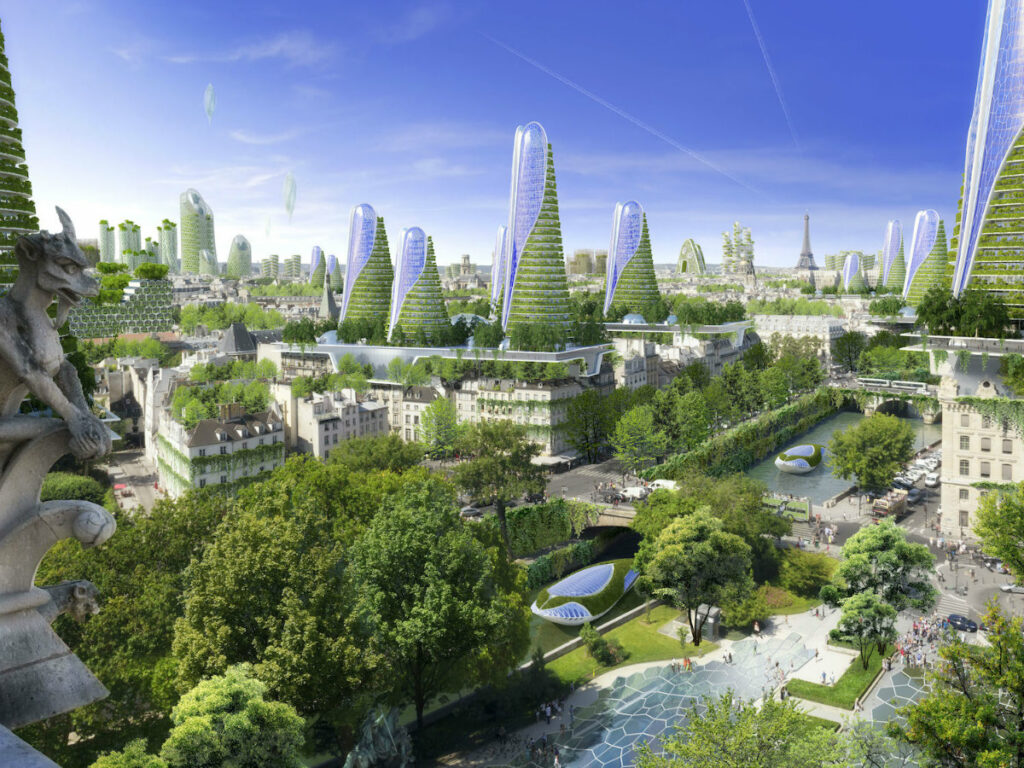 Due to the loss of arable land, cities will become greener spaces and the intersection of ecology and architecture to create a healthier life for humans.

This concept, called “archeology,” was introduced by an architect named Paolo Soleri in 1969. In this sense, he wanted to address the problems of urban sprawl and the inevitable destruction of green spaces.

In archeological designs, agricultural operations and green spaces coexist with commercial and residential centers, and spaces are used more creatively.

This mentality became popular again at the beginning of the current century, and the main reason was the acceleration of climate change.

Today, we have countless architectural and design studios that specialize in constructing urban spaces following the rules of archeology, putting optimality and sustainability at the forefront of everything else.

Common features of archeology include urban agriculture, vertical farms, aquaculture, insect farms, and acupuncture food systems (where plants and fish live together and rich in nutrients).

These operations became increasingly productive with the development of genetically engineered organisms as well as microbial engineering.

In archeological designs, agricultural operations and green spaces coexist with commercial and residential centers, and the spaces are used more creatively.

To reduce the pressure on available water resources, most of the water needed for irrigation is obtained through rainwater collection, gray water recycling, and water reclamation units.

It can also be argued that by 2050, many homes and dwellings will be equipped with 3D food printers that produce vital nutrients and adapt to a variety of tastes and diets. 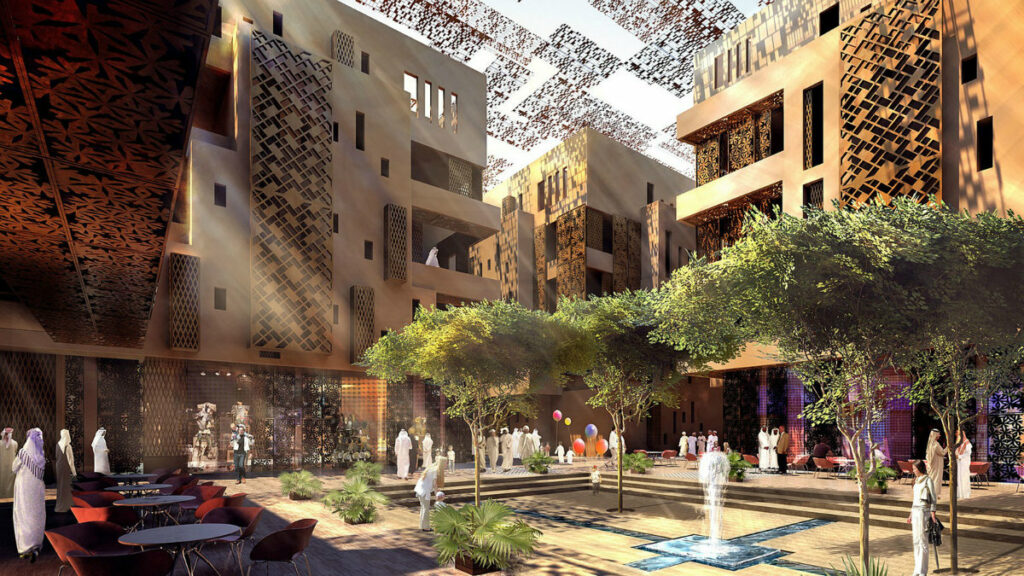 To power all of this, we will need renewable energy sources such as the same solar arrays mentioned above, vertical wind turbines, piezoelectric surfaces, and heat exchange technology.

Each building that hosts multiple homes is likely to have its own power supply facility and fuel station, meeting the most basic local needs.

This archeology was proposed by Norman Foster, founder of the architectural firm Foster and Partners. Adhering to its name, Crystal Island is supposed to be a tall, backbone-like structure that looks like a crystal. The whole structure is placed inside a breathable “secondary skin” that closes in winter to keep warm air out and opens in summer to cool the interior.

The archeology was to take place in Nagatinskaya Puima Park in central Moscow.

With a height of 450 meters and a space of 2.5 million square meters, this could be the largest human structure on the entire planet. The construction of this structure was postponed in 2009 due to the global economic crisis and has not yet come out of the limbo.

Masdar City, borrowed from its construction company, is a project planned for construction in the Emirate of Abu Dhabi. Once again, Foster and Partners is designing the city and is set to be a hobby for clean energy companies and host the International Renewable Energy Agency (IRENA) headquarters.

Following neutralizing carbon pollution, the source is amplified by a combination of solar energy and wind power. Motion sensors control all light and water to minimize consumption.

Much of the city’s water is essentially rainwater, which distillers collect.

On the other hand, 80% of water waste is recycled and reused as often as possible. 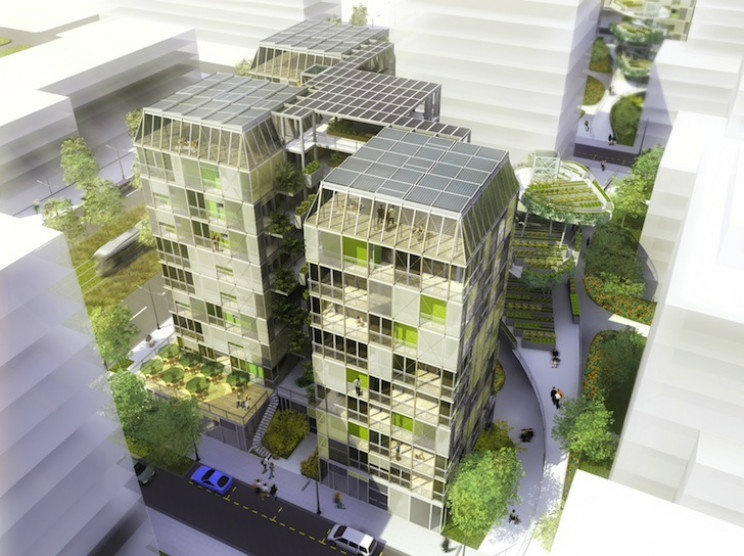 As we move forward in the 21st century, the world will have to endure two great phenomena. Advances in technology will accelerate and make fundamental changes in the way we live, work, play and even eat.

At the same time, climate change is intensifying and causing major disruptions within the natural systems on which human life and survival depend.

Fortunately, in this great contradiction, there is also a window of hope. Although rising waters and rising floods, hurricanes, and wildfires are becoming a nightmare for humankind, they are also pressuring us to seek solutions.

And while the rapid advancement of technology is becoming a constant source of stress, it will also bring innovations that will alleviate or address environmental challenges.

2050 is set to be a strange time, a time when the whole world is stuck somewhere between survival and progress, rarity and abundance, stagnation and growth.

In any case, there is a lot of potential for positive change, and perhaps a new era can be marked for a better life and greater stability.