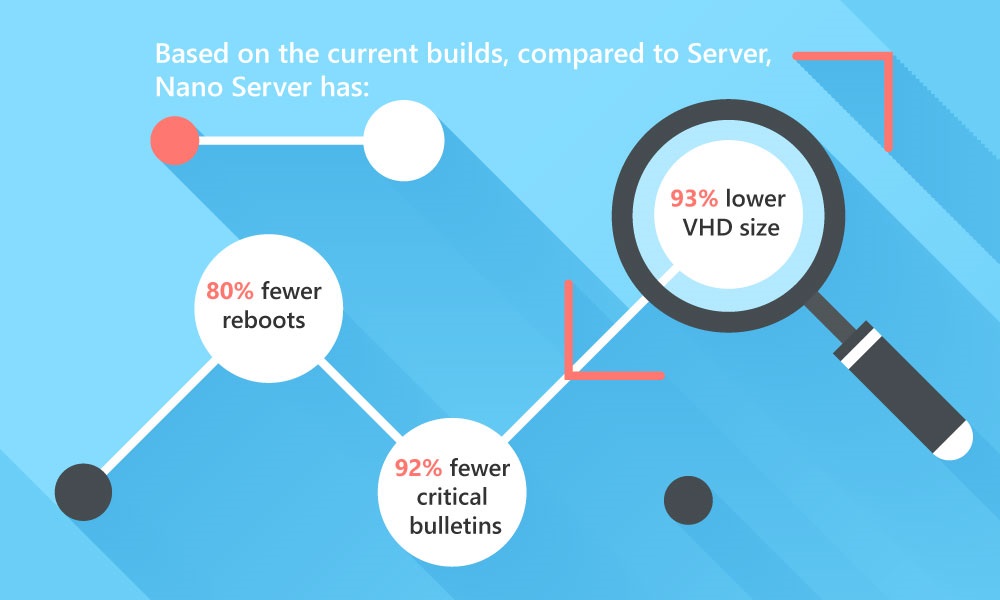 Nano Server, or in Nano Server, is a limited version of Windows Server made by Microsoft specifically to run cloud applications without the need for extremely heavy equipment and hardware.

The error rate of Nano Server is very low, and in fact, it can be said that the problem of rebooting compared to Windows Server has been reduced by more than 80%, which is unique.

When you work with Nano Server, there is no Remote Desktop login; instead, you have to manage your server through CMD WMI and PowerShell.

While Nano Server shares similarities with the Server Core option introduced in Windows Server 2012, Nano Server is even lighter than Server Core and optimized for use in the modern cloud. Microsoft sees two distinct scenarios where Nano Server is the most appropriate option, the reasons for which are listed below:

These servers were made available as part of the Windows Server 2016 Technical Preview following early development under the Tuva code name.

Nano Server officially started its activity in the second half of 2016.

With all the excitement surrounding Windows 10, it’s easy to overlook some of the new changes Microsoft has planned for the server side of businesses.

One of the biggest news that Microsoft announced was related to Nano Server.

We have prepared nine important topics related to these servers in the following. By reading them, you can get more information about the Nano Server.

Nano Server is a compact version of Windows Server that Microsoft produced under the name Tuva or in English Tuva. This program is designed to run services and complete remote management. Microsoft has built these servers as a light operating system that can run simple and light software that does not require powerful hardware.
What is the difference between Nano Server and Windows Server?

When you use Nano Server, there is no graphical GUI environment created for you, and everything is communicated through Powershell / PowerShell or other tools you can connect to the server.

The meaning of the error is that if Windows Server is turned off and on during the year, for any reason such as filling up the RAM space, low CPU, lack of memory, etc., this number will be 2 in Nano Server. Load, which means 80% fewer errors than Windows Server.

On the other hand, hackers who intend to enter the server attack Nano Serverless often, so you should know that the risks of attacking Nano Servers are very low.

Does Nano Server have a GUI?

Since Nano Server is a light and compact operating system, it does not have any graphical interface, and you cannot use it to manage it, unlike Windows Server.

You can run it from Windows Server in two ways graphically and using the console, but when it comes to Nano Server, it is only about the console environment created for you by PowerShell.

There is a question among this, can Nano Servers run Windows programs?

In this regard, it must be answered that Nano Servers cannot run programs with a graphical environment. For this reason, you must remember that Nano Server is only created for the infrastructure environment until you want normal and graphical software on it. Perform it.

What programs run in Nano Server?

Microsoft launched Nano Servers in two steps. The first step is to have a nano server for Hyper-V clusters, and when one of your servers becomes unstable for an unknown reason, the nano servers will support the main server and provide services to users. In the next step for the nano server, Microsoft started creating a public API that programmers can directly run their programs on the nano server and thus test the stability of their software.
Deleted items in Windows Server to build Nano Server

How to manage Nano Server?

Nano server management is done through PowerShell, and you can also transfer files to the nano server through FTP or debug remotely through publicly available APIs.

Will Nano Server replace Windows Server in the future?

If we want to give a short answer to this question, we must say “no” Microsoft does not intend to replace Nano Server with Windows Server; therefore, there is no need to worry or things that will make you think about changing the business model. Do your own thing, and it doesn’t exist. Nano Server was created for infrastructure issues and is a lighter version of Windows Server.

When can Nano Server be used?

At the very beginning, when talking about Nano Server, a common question arose about when people can use Nano Servers. In response to this question, Microsoft said that with the arrival of Windows Server 2016, people could easily use Nano Server.

In this part of the article, we will ask you several questions about Nano Server. By reading these questions, you will understand Nano Servers correctly and complete your information in this field.

What is Nano Server?

Nano Server is a lighter and smaller version of Windows Server that allows you to run light tasks that do not require powerful and expensive hardware and lower your costs. With the emergence of Nano Server, the costs of many companies have decreased. For this reason, it is no longer necessary to prepare expensive Windows servers to perform simple tasks.

What are nano servers made for?

One of the most important questions in this field is what Nano Server was created for. You can use nano servers to set up infrastructure issues for your company, which can be used in tasks such as creating a cluster or building Windows programs.

One of the reasons for the small volume and lightness of nano servers is that they have no graphical environment, and Microsoft has removed many components related to graphics and graphics processing tasks. You can only use a tool like PowerShell to Manage your nano servers, see what is happening on your nano server, and access files in this way.

Nano Server, like the Linux servers used in the world, is managed only by using the console environment, and there is no graphical environment for it.