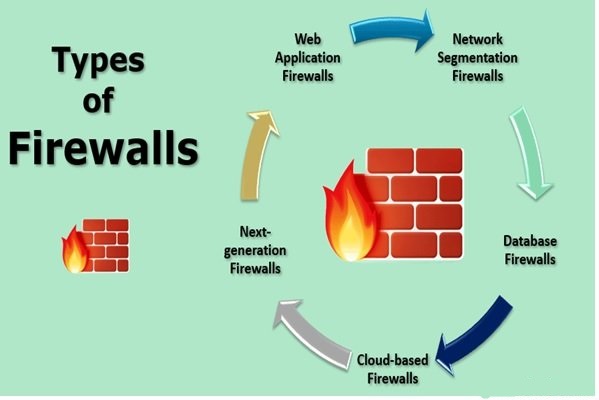 A firewall is a network security device that allows networks of home computers to exchange information securely.

The firewall prevents hackers from easily infiltrating networks and eavesdropping on the information.

Firewalls can be used in a variety of structures and architectures. Firewalls can be installed in the form of software or hardware at sensitive points in computer networks and intercept any traffic entering or leaving the network.

The Firewalls are typically placed between the organization’s private network and the public network, such as the Internet, to establish a secure connection.

Based on this definition, we can say that you can interpret the firewall as a kind of information exchange between two networks.

How do firewalls work?

Knowing what a firewall is and what it does, it’s time to figure out how a firewall works. Firewalls inspect all packets that pass through their communication mechanisms to evaluate the packets and check whether the packets are to be entered into the network following the rules and guidelines provided by the Access Control List (ACL) and the guidelines set by security experts.

Either get out of it or not. In general, firewalls are configured to allow packets that comply with ACL standards to enter the communication network.

In addition, firewalls play a key role in recording sensitive organizational information and assist security experts in analyzing information. By evaluating the reports recorded by the firewalls, network administrators ensure that suspicious activity is not performed by internal or external users.

Among the information recorded by firewalls is the description of the package, address, status, and conversion rate of the packages. However, firewalls only show packet headers on the screen. Now that you have a brief overview of firewalls, it’s time to talk about different types of firewalls.

Firewalls are classified into different types, each of which is used based on the level of safety and capability they provide to organizations. Today, various firewalls are used in the world of technology, some of which are as follows:

It is a type of firewall that is typically placed on switches that act as an interface or connector to the web. The firewall separating the software package is created only on the OSI model of an enterprise layer. Filter firewalls are dependent on policies and standards defined by access control lists.

Packet screening firewalls gain access to the checklist by thoroughly examining the layout of the received packages to confirm that they are correct and aligned with the checklist. If the software package is inconsistent with the access control list policies, the package is discarded and a report is prepared so that experts can review these reports in the future.

Surface circuit firewalls are another type of firewall. The circuit surface firewall works in the session layer in the OSI model, which is actually an intermediate layer between the application layer and the transfer layer in the TCP / IP model. This firewall monitors the connection process and the initial packets or packets in the TCP model to determine if a session request is valid.

The circuit-level firewall hides the details of the protected network from external traffic, which prevents access by abusers. One of the advantages of circuit-level firewalls is that they are relatively inexpensive and keep private network information private, but these types of firewalls cannot scan and filter packets inside.

The following operations are used in this firewall:

Each meeting is given a unique number.

The information sequence is examined.

Addresses, both origin, and destination are examined.

The port number is recorded and stored.

Firewall Inspector of the State House

Inspection firewalls have a mode, also called dynamic screening firewalls, that has a table that they use to communicate. The function of these firewalls is to compare the header of the new package with the information in this table and to decide whether to communicate based on the protocol and status.

These decisions are based on the policies listed in the firewall and related table. Modeled firewalls monitor all activities from the time the connection is opened to the time it is closed. The routing data packets used in the network are stored in the firewall table.

Based on this mechanism, the closed path sequence in the network is not forgotten and the data inspection is performed based on this information. However, due to the complexity of these firewalls, they are vulnerable to denial of service attacks.

An important advantage of these firewalls is that if a user on the network requests the data, they respond to the user with the ability to retain the previous requests from the data stored in their memory, instead of going back to the server.

The above approach increases the speed and responsiveness of the network. These firewalls work in the application layer, or layer 7 of the OSI model, and separate the enterprise network from the external network.

Firewalls of the next generation

Next-generation firewalls are a combination of packaged, state-of-the-art firewalls that are used to block advanced and new generation malware attacks and attacks targeting layer seven.

Virtual firewalls, which are gaining popularity these days, are mainly used in cloud-based networks and architectures related to VMware ESXi, Microsoft Hyper-V, and public clouds provided by Microsoft, Google, and Amazon.

These firewalls are used to monitor and secure the traffic of virtual and physical networks. Virtual firewalls are an important component of software-driven networks.

This model of firewall is mainly used by home users and small and medium businesses. Software firewalls protect systems against unauthorized access that threatens systems from the Internet. Potential benefits of these firewalls include sharing resources such as printers, scanners, changing security policies, and adjusting configurations as needed.

This firewall is a combination of the firewalls we talked about. They are advanced firewalls and have complex functions. Modular multilayer inspection firewalls can be used to build channels based on access control.

These firewalls filter packets into the grid layer to ensure a valid session. In addition, the content of the packages is evaluated at the application layer.

Hardware firewalls are marketed in the form of physical products that can be installed as hardware in communication infrastructure.

Traditionally, firewalls installed inside routers provide the ability to use the router in a network as a hardware firewall. Hardware firewalls can prevent traffic and unwanted data from entering the network by default, based on the initial settings, and create a secure data exchange stream.

This model of firewalls works in the form of closed filtering and examines the headers related to the origin and destination of the packages and if the packages are contrary to the firewall policies, they prevent it from entering the network and throw it away.