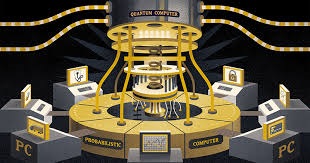 Let’s learn how they work, so that you can get acquainted with the concept of quantum processing and know what quantum computers are, stay with us until the end of this tutorial.

Quantum computers, a word that is heard a lot these days, quantum computers are the next generation of computer processes that can change the world of information technology in general. 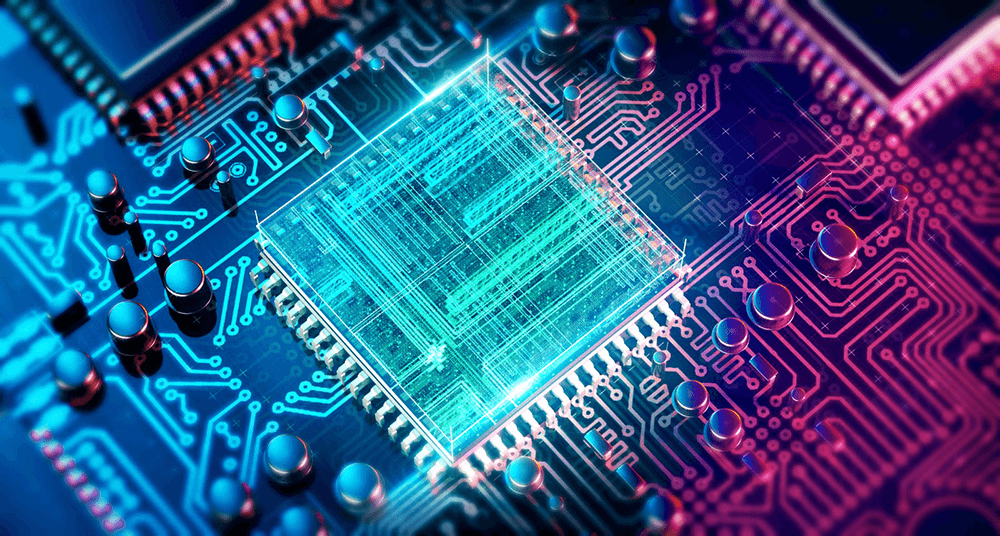 But before we get into how quantum computers work, let’s take a look at ordinary computers and how they work.

We all know that the basis of today’s computers are logic bits, that is, 0 and 1, from which different computer commands are created and the processor can perform various calculations on them.

Bits are usually represented by the amount of voltage in different circuits, for example, voltage 0 represents bit 0 and voltage 5 represents bit 1 (voltages are hypothetical and can vary on each piece of hardware).

Each of these numbers can be interpreted differently depending on the state of the system, such as a character in Word software, a number in a calculator, instruction in the processor, a piece of music or an image, and so on.

The important point in this section is that just changing one of these bits is enough to completely change the formed number and as a result, the final value of this set of bits will be different, as it is well shown in the picture above, just by changing one bit.

The total number obtained was different.

Changing each of these bits changes the fate of the whole set, in ordinary computers each bit can have only a certain value at a time, ie each bit can be 0 or 1 at a time (only one of these values)

This is where the difference between quantum computers and ordinary computers comes in. It may come as a surprise, but you should know that quantum computers can have all kinds of states at any time, that is, their bits are both 1 and 0, which we call Qubit. Be a little confused, so let’s get a little more familiar with the concept of quantum and quantum physics first.

What is the quantum property of objects?

The quantum property states that an object can be several objects at a time, or in several different states!

Suppose you toss a coin into the air, a spinning coin can be both a lion and a line, and we can not comment on its condition until it lands. There is a very famous example of this called the Schrینdinger cat experiment. In the following, we will examine this example to better understand the concept of quantum physics.

Suppose a cat is in a box and there is a container of poison in that box. As long as it is closed in the box, we have no presuppositions about the cat’s fate. There is a 50% chance that the cat is dead or 50% alive.

(In the quantum world, the exact value of this probability is equal to  1.40  percent)

In general, the theory of quantum physics states that all objects can have different types of states at any given moment unless we look at them, objects take on their logical properties only when we look at them, and before that any An object can be anything!

Now that we are a little familiar with the concept of quantum, you can better understand how quantum computers work. Each bit on these computers can have values ​​of 0 and 1 at the same time to look at it (call the calculation result )

What is a quantum computer?

As mentioned above, quantum computers can have different types of problem situations at the same time, remember the example we gave at the beginning of this article? Bits that represented two different numbers.

We said that in a normal computer each bit accepts only one value at a time, so the bit set value is equal to 172 or 236, but in a quantum computer, the bit set is equal to all the numbers in this interval at any time and can simultaneously Both 172 and 236!

A calculation that requires 4.5 terabytes of processing space on a typical computer is processed at only 56 qubits on a quantum computer!

How do quantum computers work?

As explained above, we find that a quantum computer has all the solutions to a problem in its qubits at the same time, it is enough to read the value of these qubits at the right moment to get the answer to the problem.

To be able to create the quantities of a quantum computer, it is necessary to keep the computer at temperatures close to absolute zero so that the hardware bits have quantum properties.

Progress has been made and a new world will open up for us soon, now companies like Google, IBM, and Microsoft are working on quantum processing.

Applications of a quantum computer

Almost everything we were not able to calculate and model before is now possible with the help of quantum computing! From atomic particle modeling to various molecules, pharmaceutical, food, and other industries

One of the most important applications of quantum computers is in dealing with atoms and molecules. These computers will become an undisputed power in this field and can simulate different models at the same time and make great contributions to medicine and pharmacy…

How reliable are quantum processes?

One of the challenges currently facing quantum computers is the problem of uncertainty in their response. , But this mechanism does not work in today’s quantum computers, because it takes about 2,000 qbps to add error test bits, while the most powerful quantum computers available now have about 100 qbits in their processors!

Although the world of IT and information technology is expanding day by day, one of the challenges facing quantum computers at the moment is the uncertainty of the results of their processing.

As we said, quantum computers have all the instances of a problem in an instant, now suppose this power is used to crack passwords and encryption protocols because a quantum computer currently has all the available codes, just the password is enough. Choose the right one in an instant!

That is why many governments are competing in this field, in fact, the first person who can access quantum computing technology can find all the passwords in the world and get through any lock!

will all be compromised, but security centers are not idle and are trying to solve these problems, they are trying to create an encryption system that can withstand Quantum computers resistance.

On the other hand, the use of quantum computing capabilities in artificial intelligence provides robots with extraordinary processing power and analysis. Humans rebel and use us as their slaves.

What do you think about this? Do you have any other information about quantum computers? Surely the world of quantum processing is so complex and exciting that it can not be expressed in the form of an article, this post will be more complete with your valuable comments, so share your views and experiences with us and other users!

You are one step ahead of others!

If you are interested in IT and technology and want to progress faster in this field, join the total of 4996 members of IT now, access all premium training, receive the latest practical training related to IT and use free advice, some of the benefits of membership in They are sites, you have also joined the users and now enter the world of professionals …