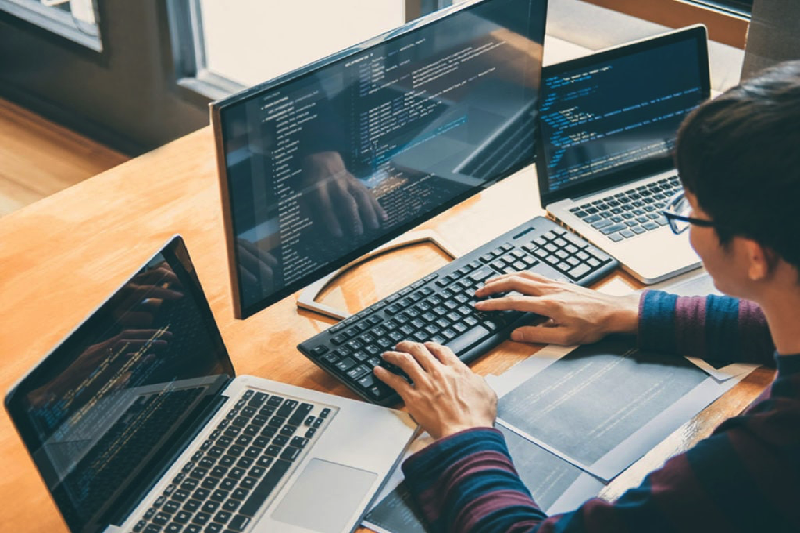 To Become A Proficient Web Developer, You Must Have A Thorough Understanding Of The Underlying Web Technologies Such As HTML, CSS, And Javascript.

Also, it is recommended to learn CSS technology and CSS-related frameworks.

Since web development is one of the most profitable jobs in the world of information technology, this article will introduce tips that will help you become an efficient web developer in a shorter time.

How to become a web developer?

To become an expert web developer, you must follow a five-step program.

1. Learn the basics of web development

The first and best step is to learn the basics of web development, including understanding HTML (Hypertext Markup Language), CSS (Cascading Style Sheets), and JavaScript.

The practical benefits of coding boot camps become more apparent over time. In addition, employers value skills and experience more than education, and anyone who can prove their abilities will be paid on the same footing as developers with a college degree.

2. Choose an area of ​​expertise

Web development jobs come in wide varieties. You should focus on one area of ​​expertise to improve your skills precisely. However, the following three areas have the best job market:

The list could go on, but investing in any of these web programming languages ​​pays off brilliantly. Web development is diverse, and the list of everything you can do in this field is too long to cover in this article.

4. Work on projects to increase your skill level as a web developer

By learning the basics of HTML, CSS, and JavaScript, which are the foundation of web programming skills, you’re ready to work on a web project. As you progress and put the skill set of a web developer into practice, you’ll gain experience. Some of these technical skills are hard, such as programming with Python, using SQL and the jQuery function library, or using tools like Git for version control. The best way to improve your web development skills is to start; the more you use these tools, the better quality code you will write.

As a web developer, providing a compelling portfolio that showcases your most vital skills can be your best resume when applying for a job. To create a portfolio that makes you stand out from the crowd, you need to keep three things in mind:

How can I become a web developer very quickly?

Coding boot camps are a popular option for aspiring web developers. These short, intensive classes provide a hands-on learning experience and an opportunity for people to learn job-ready skills in as little as 12 weeks.

Many web developers typically start their careers with a degree in software engineering, computer science, or a related field. However, these people may come from entirely different areas. A growing number of professionals do things to show that they are no less than those who majored in computer science.

What does it take to become a web developer?

To become a good web developer, you need to learn:

As in other technology areas, web developers need to learn networking and keep learning, as programming languages ​​and techniques are constantly changing. Apart from learning programming concepts in boot camps, participation in forums and open source projects like GitHub or Bootstrap will increase your skill level and awareness.

How many programming languages ​​should a web developer know?

Are you a beginner web developer or a pro? What kind of projects are you working on or want to work on, and what’s next for you? A simple question with a complex answer. It depends on several variables.

The more programming languages ​​you know, the better

If you are a web developer, rest assured that this industry is growing. According to the US Department of Labor, the market for web developers is expected to grow significantly through 2026.

According to surveys, the more experienced web developers are, the more likely they will become full-stack developers over time and earn more money. To advance in your career as a web developer, it’s essential to keep learning new and specialized languages ​​to better collaborate with or manage teams working on a wide range of projects.

The most popular programming languages

As web applications continue to increase, we should expect the list of popular programming languages ​​to change. When asked what technologies will have the most impact on their industry over the next 5-10 years, a large number of survey respondents (78%) chose artificial intelligence and its subset, machine learning, as the most significant opportunity for growth.

Other technologies that people predict will be popular in the future are the Internet of Things (54 percent), augmented reality (53 percent), and Blockchain (41 percent). While respondents believe these technologies will become popular in the future, only a few developers have worked with them directly. 83% of respondents have not yet worked on AI platforms or blockchain technology, and 80% have no experience working with IoT devices.

What languages ​​should a novice web developer learn?

Considering the extensive five areas, i.e., Artificial Intelligence, Machine Learning, Internet of Things, Augmented Reality, and Blockchain, significant growth, and development are expected to take place in them, which will have a direct impact on the web developer job market, as all of these areas contribute to websites and Web-based interactive applications need to be able to communicate with users.

What makes you a good web developer?

What skills are companies looking for, and how can aspiring developers differentiate themselves when entering the market? For starters, consider the following definition, which gives a complete picture of a good developer: “Writes functional code that is tested for correctness, delivers on time, uses best design patterns, They are highly readable, communicate seamlessly with the development team, and continuously improve their knowledge and skills.” According to this definition, a good web developer should have the following qualities: