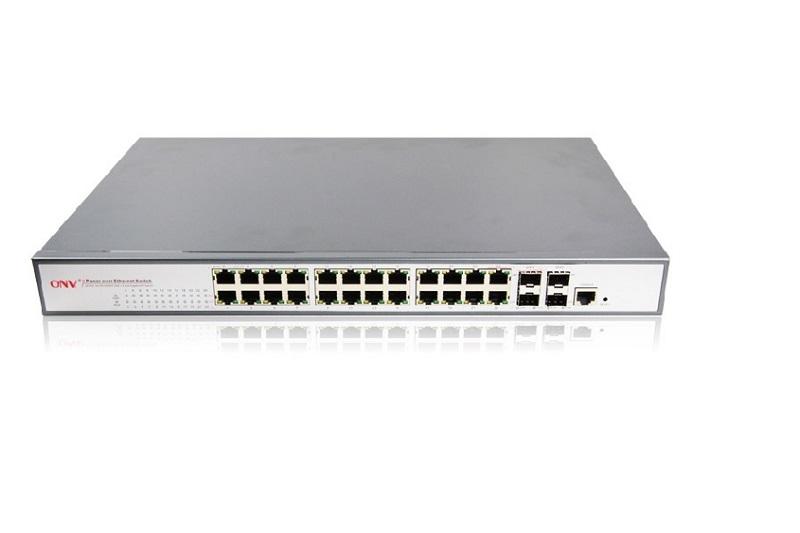 Layer 2 Switching Is The Process Of Using The Hardware Addresses Of Devices On A Local Network To Segment The Network.

Layer 2 Switches, We use a switching technique to divide large collision domains into smaller domains so that two or more devices with the same bandwidth are placed in their environments.

Hub-based networks are an excellent example in this field, but hubs have been replaced by a more advanced model called a switch because they waste network bandwidth and cause other problems.

Since each switch port has its collision domain, hubs have gradually replaced switches to implement more stable and secure networks.

Switches have entirely changed the way networks are designed and implemented.

What is the difference between the functional mechanism of bridges and switches?

As you can see, these two network hardware are technically significantly different. Bridges use software to create and manage a Content Addressable Memory (CAM) filter table. In contrast, the fast switches we use today use Application-Specific Integrated Circuits (ASICs) to build and maintain MAC filter tables. Still, they have the same functionality, and we are not wrong if we describe a layer two switch as a multiport bridge because both hardware is used to break collision domains.

Layer 2 switches and bridges are faster than routers because they don’t waste time checking network layer header information. Instead, they look at the frame’s hardware addresses before deciding whether to send or discard the frame. Unlike hubs, switches create dedicated and private collision domains and provide independent bandwidth per port.

When you use Layer 2 switching, you get four essential benefits:

In layer two switchings, no changes are applied to the data packet, which plays a vital role in the fast transmission of information packets because the switch only reads the encapsulating frame of the package. As a result, more minor routing errors are encountered.

In addition, if you use Layer 2 switching for workgroup connectivity and network segmentation (collision domains separation), you can create more segments in the network, resulting in optimal bandwidth utilization. Another excellent benefit of Layer 2 switching is that more bandwidth is available to users because each device connected to the switch has its independent collision domain.

Now that we have provided a brief explanation of the three critical capabilities of Layer 2 switches, it is time to examine each of these functions in more detail.

The MAC address table is empty when a switch. Figure 1 shows this situation.

When a network device sends a packet, and an interface receives a frame, the switch enters the frame’s source address into the forwarding/filter table to obtain detailed information about the device that sent the frame. In the first routing step, the switch has to use the frame flooding technique for all interfaces connected to the button to find the frame’s destination because it has no idea where the destination device is located in the network.

If a device responds to this frame with a flooded message and sends a reply frame, the switch receives the frame’s source address and adds it to its MAC address database. In this case, the above address corresponds to the address of the interface that received the frame. Since the switch now has both relevant MAC addresses in its filter table, the two devices can establish a point-to-point connection. Like the first time, the controller no longer needs to send the frames of these two devices to all ports because it has information related to these two devices. That’s why layer two switches work smarter than hubs. In a hub-based network, whenever any device sends a frame, it is sent to all ports because the seat does not have a database to store the hardware information of the devices. Figure 2 shows the process of building the MAC addresses database.

In Figure 2, you can see four hosts connected to a switch. When the switch is first powered on, as shown in Figure 1, it does not have any addresses, and the forwarding/filter table is empty. Still, when the hosts start communicating, the switch displays the hardware address of the source of each frame, along with the port to which the frame’s source address belongs. It matches in the table.

The processes performed in Figure 2 are as follows:

If host A and host B do not communicate with the switch for a long time, the controller deletes their entries from the database so that the database table is not occupied unnecessarily.

If the destination hardware address is not in the MAC database, the frame is sent based on the flooding technique to all active interfaces except the one that is the source. If a device responds to a flooded frame, the MAC database information is updated with the location of the device and its associated interface.

If a host or server sends a broadcast message on the LAN, the switch will default flood the frame to all active ports except the source port. Note that the controller creates smaller collision domains, but by default, it creates a large playback domain. In Figure 3, host A sends a data frame to host D. What does the switch do when it receives the frame from host A? To find the answer, look at figure 4.

Since host A’s MAC address is not in the forwarding/filter table, the switch adds the source and port address to the MAC address table and forwards the frame to host D. Note that the controller first checks the MAC address of the head to make sure it is in the CAM table. After that, if the MAC address of host D is not found in the forwarding/filter table, the switch forwards the frame to all ports except port Fa0/3 because that is the port that sent the frame. The controller gets stuck in an endless loop if it doesn’t check this issue. Now let’s examine the controller’s output using the show mac address-table command. By running the above command, you will get the following information.

It is not a good idea to allow all users to access the switch; Just as we worry about the security of wireless communication, we should worry about the safety of the button. How can we prevent a host from connecting to one of the switch ports, or in worse cases, an additional hub, switch, or access point to the enterprise switch’s Ethernet port? By default, MAC addresses are stored dynamically in the MAC address database. However, port security techniques prevent unauthorized devices from connecting to the switch. Figure 5 shows two hosts connected to the Fa0/3 port of the switch through a hub or access point. 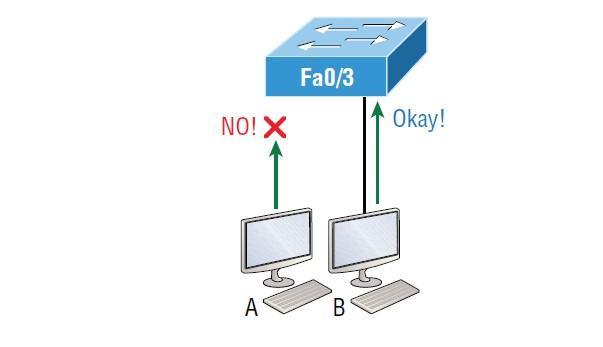 Using the port security technique, you can dynamically limit the number of MAC addresses that can bind to a specific port or set static MAC addresses. This technique is mainly used in organizations where employees do not follow security policies and connect personal devices to the corporate network. In such a situation, if the user violates the security policy, it is possible to shut down the port; now, the user must provide a convincing reason why he broke the security policy.

While the above technique improves network security, there are other things you need to do to maintain or improve network security while maintaining network performance. Network experts recommend spending considerable time on network implementation and always remembering to close unused ports or move them to a new VLAN. By default, all switch ports are enabled, so you must ensure that users cannot access unused switch ports.

There are important commands to configure port security which are as follows:

One of the essential points you should pay attention to when using switches, such as Cisco switches, is the default settings related to ports. Typically, ports on Cisco switches enter the trunk state when they detect another switch is connected to them, but you must configure the button to access the port state. If you do not do this, you will not be able to use the port security mechanism. Once the above configuration is enabled, you can use port security commands. Additionally, ensure to enable the port security feature with the switchport port-security knowledge. If you look carefully at the set of commands above, you will see that the above command can call in four different ways.

Using the switchport port-security command, you can configure the device to take one of the following actions when a security breach occurs:

If you want to configure a switch port to allow one host per port and ensure that the port is shut down if this rule is violated, use the following commands:

Network experts are very interested in these commands because they prevent clients from accidentally connecting to a particular switch or access point. The above method looks good, but the disadvantage is that it allows only one MAC address to access the port. Hence, if another person tries to add another host to a network segment, the switch port will immediately go into an inactive state. When this happens, you must manually connect to the switch, and run Shutdown commands on it to reactivate the port. Another command that network experts use is Sticky, which is used together with the mac-address order, as in the following code snippet.

In general, by using Sticky, you can benefit from a robust security mechanism without explicitly entering every client’s MAC address on the network. This command shortens the switch configuration process. In the previous example, the first two MAC addresses can connect to the switch port without problems and are connected to it as static addresses and entered in the running-config. Still, when the third address tries to connect to the port, the port is immediately shut down. In Figure 6, you can see a host called the lobby, which must protect against unauthorized Ethernet cable connections.

Based on what solution should we ensure that only the MAC address of the lobby computer will be allowed by the Fa0/1 switch port? The solution is simple; all we have to do is add a static mac entry based on the following set of commands:

To protect the PC in the lobby, we set the maximum allowed mac addresses to 1 so that if someone tries to connect an ethernet cable to the switch, the port will not shut down. This limitation drops unauthorized frames, but the interface and port continue to serve without problems.

The existence of additional links between the switches is essential because in case of failure of one link, the traffic load is transferred to the other link, and the operation of the network does not stop. However, duplicate links can cause more problems if not configured correctly. Among the most critical issues caused by double links, the following should mention: 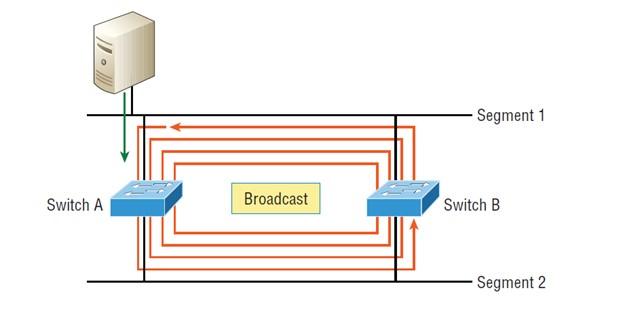 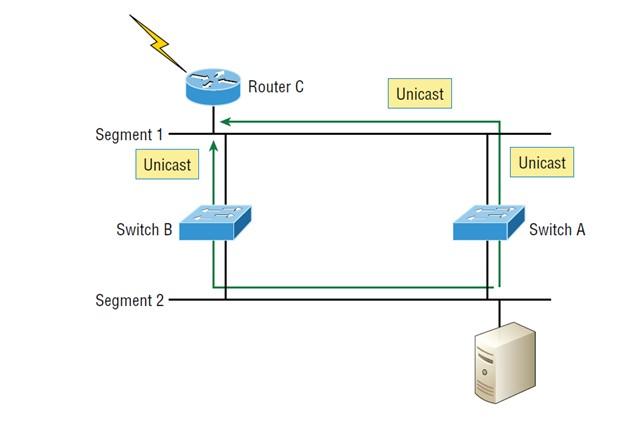 Each of the mentioned problems will mean stopping the correct servicing of the switch, slowing down the network, and increasing the packet loss rate. Therefore, we must solve this problem somehow. To solve this problem, network experts use the spanning tree protocol, which can solve all the mentioned problems. When you implement the spanning tree protocol, you have redundant links that act intelligently and behave based on spanning tree instructions. Hence, the frames have a definite end point and solve the repetition problem.