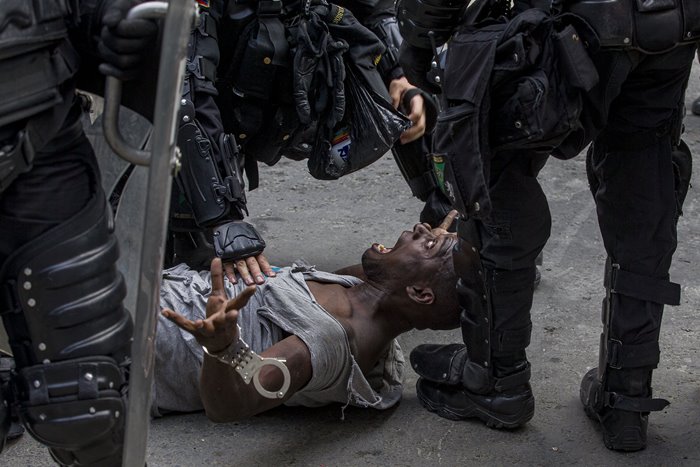 The Winners Of The Sony World Photography Awards Competition Were Announced In The Open Category. Images, Including A Powerful Protest Photo From Colombia And A Heartbreaking Photo Of A Dead Fish In A Plastic Bag, Were Among The Influential Winners Of This Round.

The World Photography Organization announced the Sony World Photography Awards winners in the open category. In other words, the best single images from 2019 were among the winners of this period. It can be said that the ideas presented in the 2019 competition were incredible.

More than a hundred photographers were selected from the open competition list; however, only ten photos made it to the list of final winners and were declared winners. Winners cover a wide range of topics.

In this competition, from an image at an Iggy Pop concert to an attractive portrait of two cheetahs, the winners were among the winners. Other ideas, such as a powerful protest photo from Colombia and a sad photo of a dead fish in a plastic bag, were among the influential winners of this period.

In 2007, Scott Gray founded the World Photography Organization. The purpose of this competition is to raise the level of conversation about photography worldwide by holding exhibitions and awarding prizes and competitions throughout the year. Sony declares its mission to support photographers around the world, celebrate and showcase their work, and foster the photography environment on a global scale.

The World Photography Organization is a global platform for photography that activates actions in more than 50 countries every year to help support artists active in photography.

These actions range from international exhibition tours, online competitions, and prestigious awards to collaborative projects and art exhibitions. Sony says, “We embrace photography in all its forms and have dedicated an opportunity for the community of artists and photographers to succeed.”

Every year, the World Photography Organization organizes the Sony Photography Festival with the financial support of this Japanese company. The Sony World Photo Awards have four different categories:

Until all selected works are completed, participation in this contest is free. Finally, a total of sixty thousand dollars will be awarded to the chosen people. All ten winners will receive the latest digital imaging equipment from Sony and compete for the title of Independent Photographer of the Year; All selected works will be displayed at the annual Sony World Photography Awards exhibition, Which will be announced in June.

Stay with us until the end of this article to see all ten winners of this tournament. Also, if you want to learn more about the Sony World Photography Awards or see the complete list of each category, you can visit the World Photography website.

The winner of the architecture department 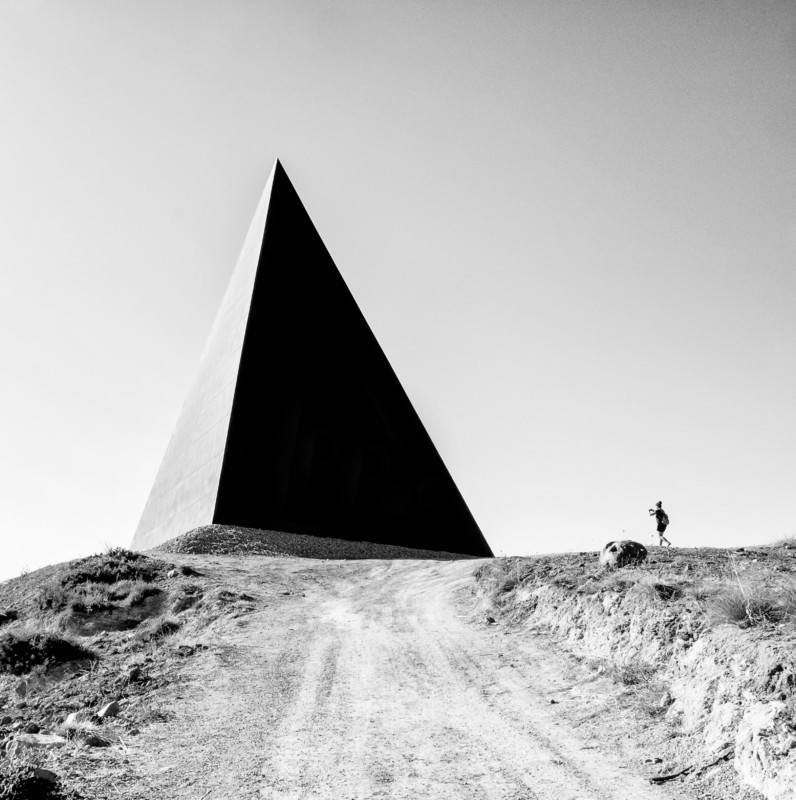 A group of friends and I returned to Sicily for vacation. Meanwhile, we also visited a museum called Fiumara d’Arte. This open-air museum displays sculptures made by contemporary artists on the banks of the Tusa River. Among these works is 38 Degrees Parallel by Mauro Stacioli. A pyramid is located precisely at a point equal to the geographical coordinates of 38 degrees.

The winner of the creativity section 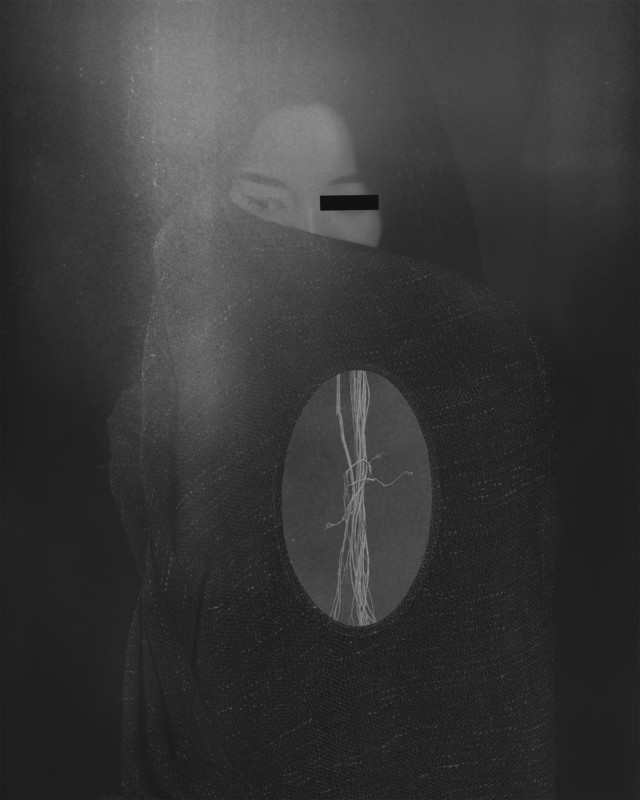 This is one of the images in my collection called “Hua.” Hua means flower in Chinese. Flowers are often used as a metaphor for life and eroticism in art. Hua’s collection explores the commonalities and connections between flowers and women, especially their vulnerability and emotional sensitivity. This collection translates qualities such as peace and emotions such as uncertainty, fear, anxiety, and loneliness into abstract and artistic forms. In the knot image, I’ve used a combination of light and texture to create strong images that heighten emotion. I like to use symbolic and metaphorical combinations in my work. I hope that this issue will make the audience combine their mentality with the objectivity of the photo and lead to different interpretations, perceptions, and feelings in them. 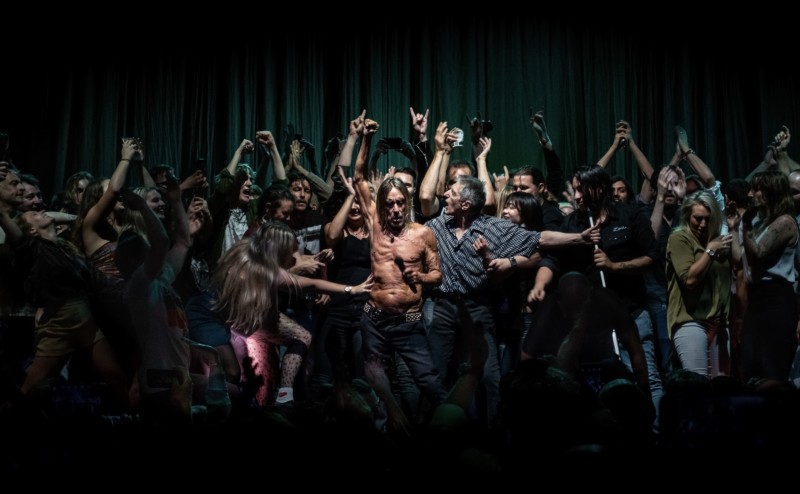 This image was recorded on April 17, 2019. When Iggy Pop’s concertgoers were invited to dance at his concert at the Sydney Opera House in Australia. This image showed the warm welcome of the Australian public to artists who travel long distances to reach them.

In the picture, the woman reaches out her arm to touch Iggy Pop. Iggy Pop seems oblivious to the woman’s performance due to the pressure of the crowd around him. One of Iggy’s assistants, Joss (in a gray plaid shirt), tries to create space around Iggy. This scene is reminiscent of a Bible passage: he thought that if he would only touch his garment, he would be healed (Mark 5, line 28). This image has been compared to religious paintings by Caravaggio, painted with the chiaroscuro technique. This photo went viral on social media and made 40,000 people, including Iggy Pop, very happy.

Iggy Pop, whose real name is James Newell Osterberg Jr., is an American singer, songwriter, musician, and actor. Although Iggy Pop is often referred to as the inventor or godfather of punk rock, his musical style has varied throughout his 5-decade career, spanning pop, metal, jazz, and blues. Pop was the drummer of a local blues band called “Iguanas” in high school and was known by the nickname “Iggy” since those years.

The winner of the landscape category 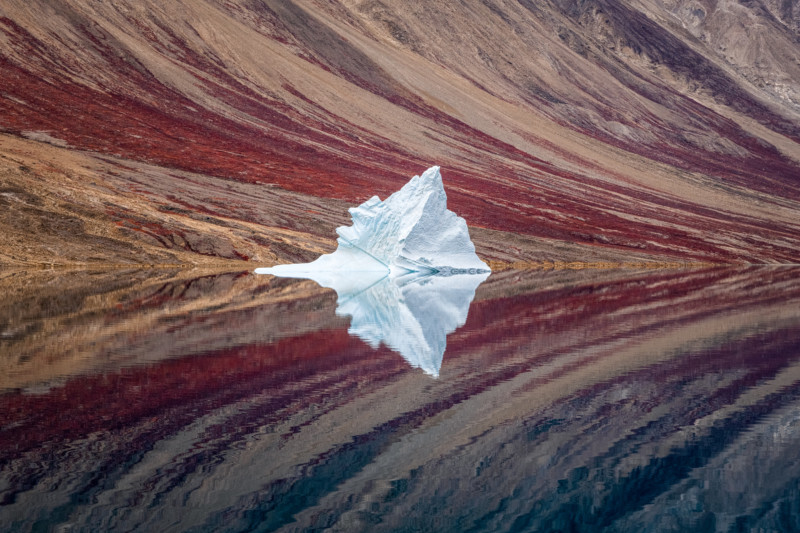 An isolated iceberg rests against the walls of Fjord in Northeast Greenland National Park.

The winner of the movement category

The four 125-meter-high cooling towers of the Iron Bridge power station in Shropshire, England, took just 10 seconds to collapse on December 6, 2019. These four towers were the sights of this area for 50 years; however, they were demolished as part of new development in the area. It had been planned for a long time to destroy the towers, But because these four towers were close to the river, railway line, and protected forest land, their demolition also had to be done carefully. This photo was taken in my garden, located on the hillside in front of this area.

The winner of the natural world and wildlife category 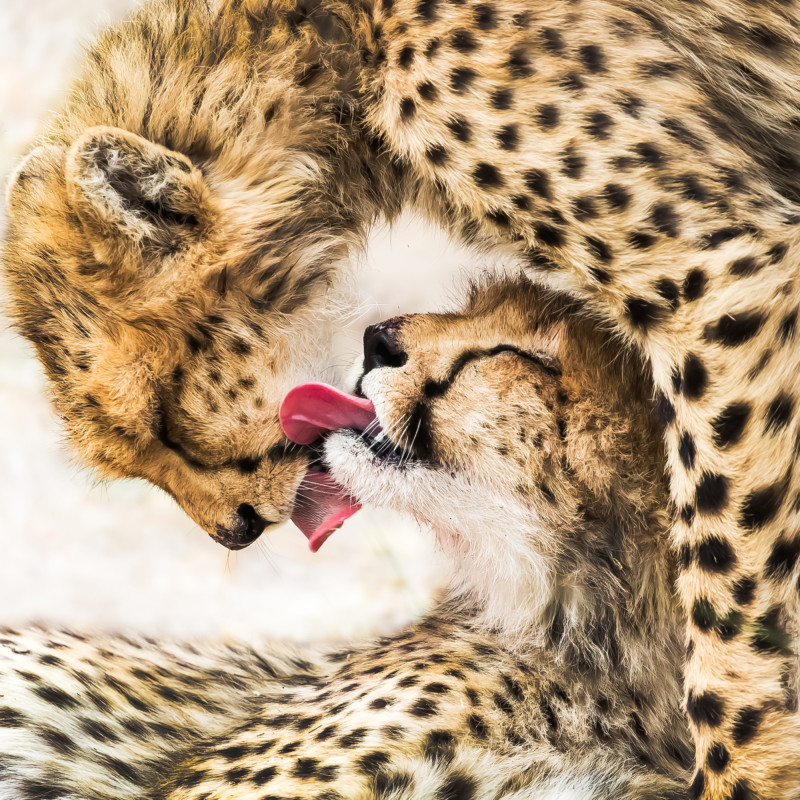 These cheetahs had eaten antelope (ruminant) and licked the blood stains off each other’s faces. This rare situation reminded me of a traditional tai chi diagram. This photo was taken in January 2019 in Botswana. A Tai Chi diagram is a circle evenly divided by curved lines. The two parts of this chart are in the shape of two fishes, so some people call this chart the name of “yin-yang” fish. Two equally divided Yin-Yang fishes form an endless Tai Chi diagram. Yin fish represents Yin and softness, and Yang fish represents Yang and hardness. From the “in” fishtail area, softness begins to increase, and when the softness rises to the maximum, the “yang” fishtail appears and announces the beginning of hardness.

The winner of the portrait category 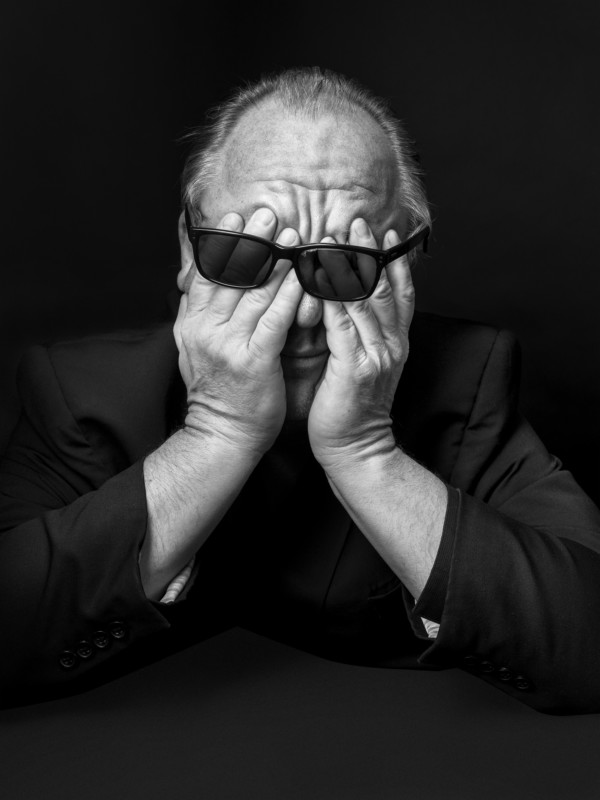 MOJO magazine photographers enjoy a rare degree of freedom and confidence in what is usually a brief. This allows us to record our experience with very prominent musicians. However, when photographing famous singers, we are often aware of the difficulty we will have to do several times. I like to admit it and asked Charles (aka Black Francis) to show me the level of desperation created in the photos. He came up with this heartbreaking pose, and I used his image as the central portrait. 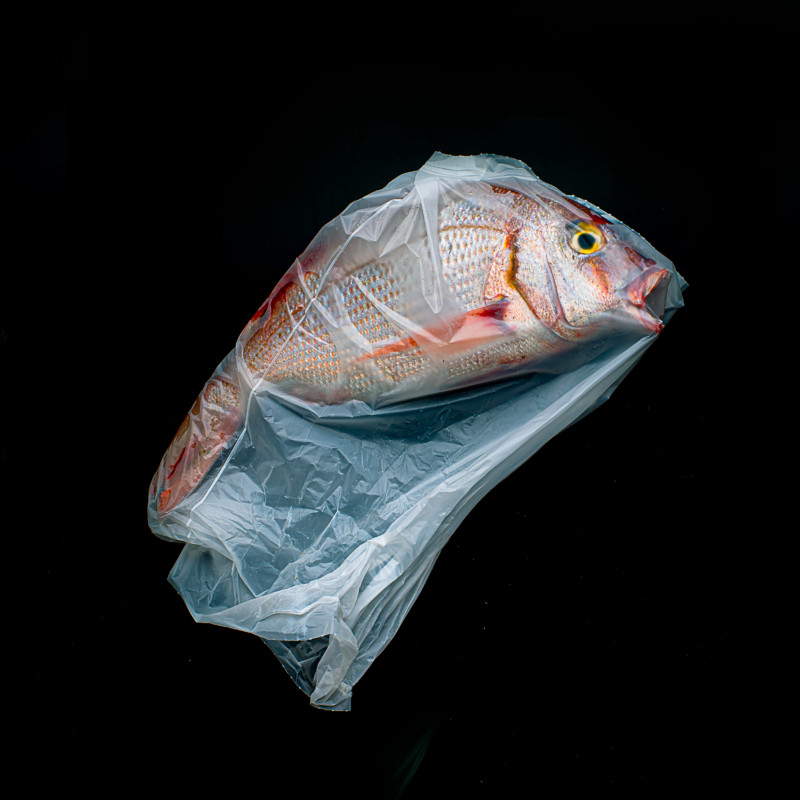 Eight million tons of plastic end up in our oceans every year. This figure is equivalent to emptying a garbage truck into the water every minute. This picture signifies my protest against the pollution of seas and oceans. Oceans are under pressure from a range of forces, including acidification from climate change, overfishing, and corruption, especially in the form of shopping bags, bottles, toys, the plastic used for food packaging, fishing gear, cigarette filters, sunglasses, buckets, and toilet seats. Ferengi, and other wastes, are under a lot of pressure. According to a report published in Science magazine, between 4.8 and 12.7 million tons of plastic waste are dumped into the ocean yearly. In my language (Spanish), we use the words “Naturaleza Muerta” to refer to the still life. It is interesting to know that this word is translated as dead nature.

Today, plastic debris has been found in various habitats, from the deep seas to the ice of the Arctic Ocean. In some areas, water currents have collected plastic objects and other debris, turning them into giant, swirling piles of trash. Some of these pieces of garbage cause the death or entanglement of marine mammals, fish, or birds. This problem is not solved by decomposing these plastic objects either; Because about 90% of their chemicals will remain in the environment for hundreds of years.

The winner of the street photography category 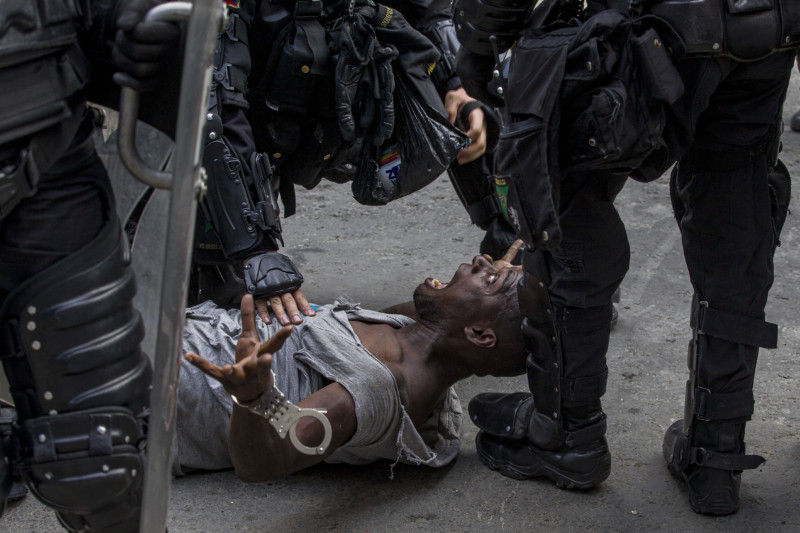 In recent years, many protests have started across Latin America. The reasons for the unrest range from a proposed end to fuel subsidies in Ecuador to rising subway fares in Chile and feelings of inequality and a lack of public opportunity in Colombia. In this photo in Medellin, northwestern Colombia, workers and street vendors participated in a march when Medellin’s anti-riot group dispersed them.

In the series of protests that began on November 21, 2019, hundreds of thousands of Colombian citizens demonstrated in support of the Colombian peace process and against the current government. This was a peaceful demonstration; However, several violent protests gave rise to nighttime demonstrations in Cali (city) and Bogotá. This demonstration is one of the largest mass demonstrations that have occurred in Colombia in recent years.

The winner of the travel category 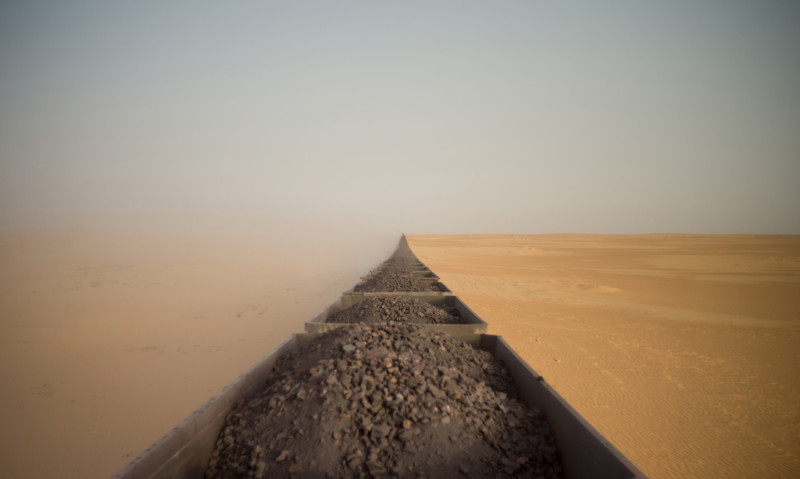 With a length of 2.5 km, the iron ore train in Mauritania is one of the longest trains in the world. This train covers a distance of more than 700 kilometers from the coastal city of Noidabu to the Zorat Sahara desert. At Zouérat, the train has more than 200 wagons full of stones before it begins its long journey back to Nouadhibou. I boarded this train in July 2019. On the first leg of the trip, I realized that to photograph the length of the train, I needed to stand on the rocks and get in the rear carriage to get a full view and the sun behind me. Alas, none of this was possible until the morning of the third day. At the time, I was desperate even to take this photo.

Mauritania’s “Train du Desert” railway line was launched in 1963. This train departs daily from a port in Noidabo on the Atlantic coast and goes to the iron ore mines in Zurat in the northwest of the country. This journey, carried out on the border of the disputed region of the Sahara, lasts about 20 hours and covers a total of 704 kilometers. The said train is almost two kilometers long and consists of 3 or 4 diesel locomotives, a passenger car, and between 200 and 210 freight cars.

The train also carries passengers from remote communities in the Sahara, reducing the tedious and unpleasant road journey of about 500 kilometers, which includes a long detour to bypass the capital of Mauritania, Nocturne. Many Mauritanian people prefer to board the crowded and crowded trains in second-class cars or cargo cars and reach their destination without cost and in less time.

This photo was taken as I stood on my tiptoes on top of a mountain of rocks, trying to stay steady as the train slid from side to side.