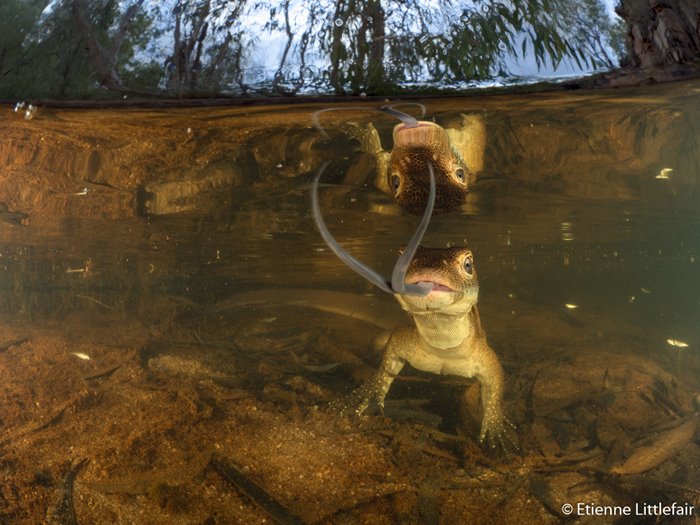 The Winners Of The Australian Natural Geography Photography Contest Have Been Announced. This Competition Is Designed To Celebrate The Natural Beauty Of Australia And Its Surrounding Areas, Such As New Zealand, Antarctica, And New Guinea.

The winners of this competition include stunning photos of nature, animals, and the impact of humans on the world around them.

Australia, located like a big island in the Pacific Ocean, is geologically the oldest land in the world. When it comes to nature, Australia is an entirely different world. You can find extraordinary natural wonders everywhere on this beautiful continent. The diverse nature of Australia has attractions that are scattered throughout the country. Some are spectacular, as if they were brought here from another world.

The South Australian Museum has announced the best Australian natural geography photographer of the year.

The museum has also shared the winning images from each of the ten categories presented in this year’s competition. The Australian Geographic Nature Photographer of the Year competition annually celebrates the regional ecosystems and natural heritage of Australia, New Zealand, Antarctica, and New Guinea.

This competition invites photographers worldwide to send photos of nature and wildlife in Australia, New Zealand, Antarctica, and New Guinea. Each year the final works are placed in an exhibition developed by the South Australian Museum.

The natural world’s stunning beauty is displayed in this competition and the recorded images. Professional, emerging, and young photographers alike demonstrate the time, patience, artistry, and flawless technique of capturing perfect moments in time. In total, in 2019, 2,219 images were judged by Justin Gilligan, Glenn McKimmin, and Tui Roy. The 2019 Australian Geographic Nature Photographer of the Year award went to Matt Bateson from Western Australia.

This award is for an image of a beached whale surrounded by sharks at Chines Beach in Albany, Western Australia. A DJI Phantom 4 Pro drone captured the winning shot. This is the first time during the competition that an image recorded by a drone has won the competition and won the main prize.

“It was a surreal experience to arrive in a quiet coastal town with a pristine beach and then see this huge whale not even five meters from the shore,” said winner Bateson.

“Also, with a little more attention, we noticed that several sharks were stopped there in a circle around this whale.”

Continuing his interview with the Australian Nature Photographer of the Year competition, Matt Bateson said: “I sent the drone into the sky to see the aerial view and took a series of photos from above the view. “The winning image was one of the last images I captured, and I was fortunate that the shark came back for another look.”

For this contest, Matt Bateson received a $10,000 cash prize and a Coral Expeditions cruise gift. You can also get more information about the Australian Nature Photographer of the Year competition and the South Australian Museum by visiting the websites. 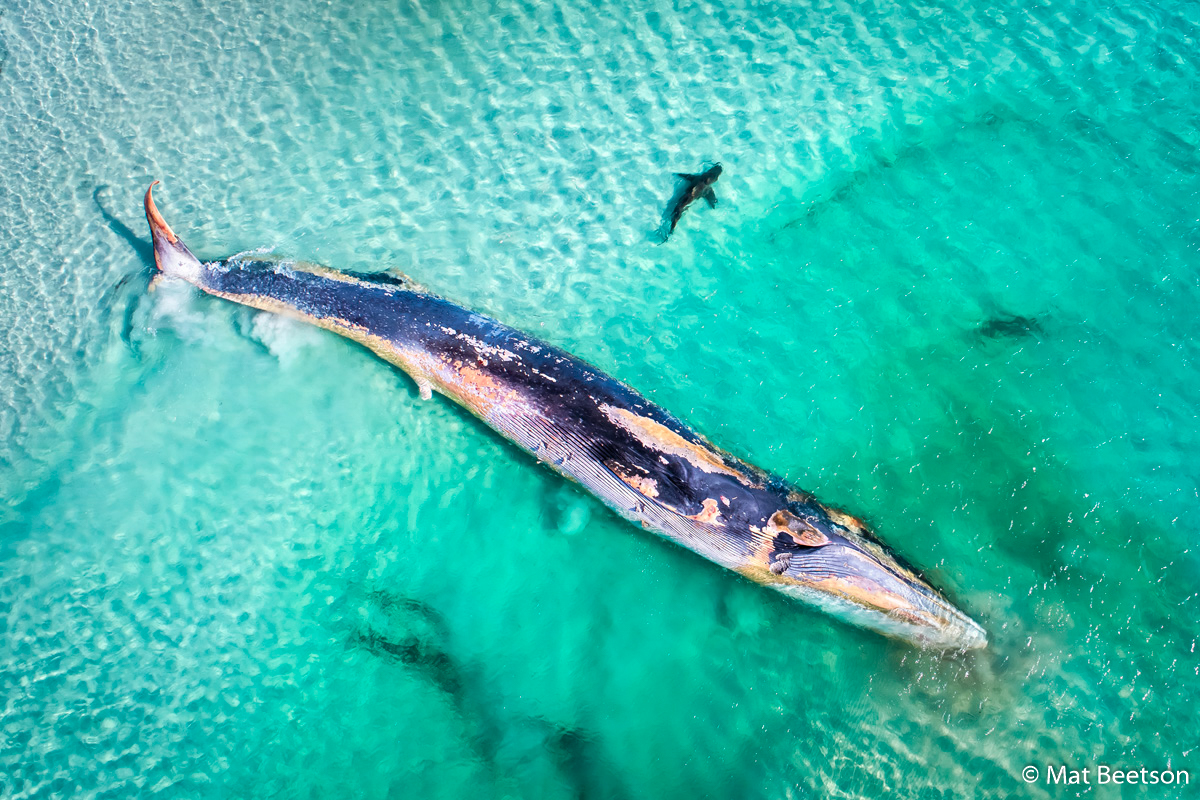 In this area, fin whales are regularly seen, But seeing one near the shore is rare. The fin whale is an aquatic mammal of the subfamily of whales. This creature is the second largest living creature in the world after the blue whale. In this picture, the fin whale is less than 5 meters from the beach and 100 meters from residential houses. Researchers consider this to be an unusual occurrence for this type of whale. This whale has no teeth; despite its vast size, it is not dangerous to humans. The killer whale matures at 25 to 30 years old and lives more than 90 years. Of course, whales of this type have been found that were 135 to 140 years old. The length of this whale reaches more than 27 meters, and its weight goes 74 tons.

The winner of the animal portrait category 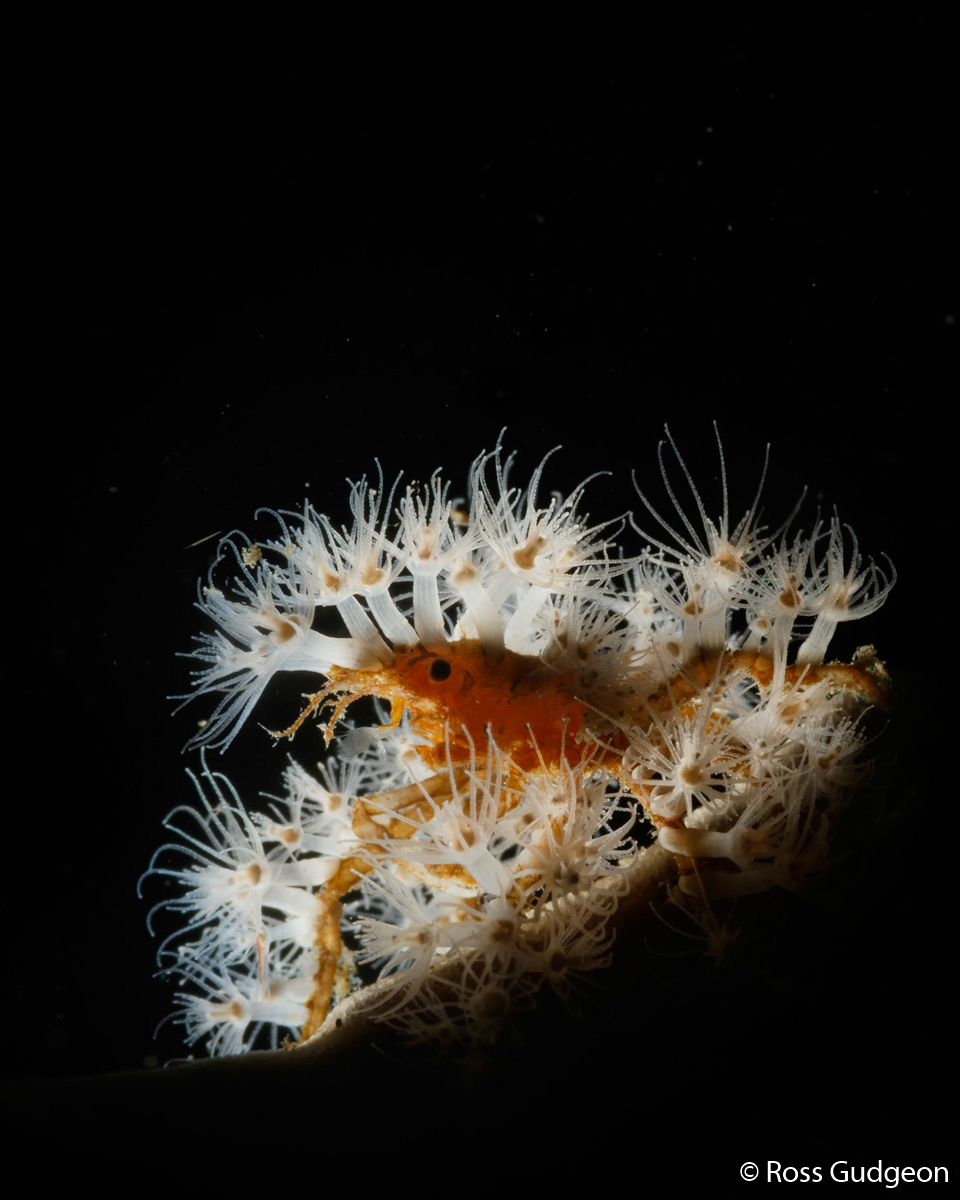 Typically, ornamental crabs attach pieces of sponge and seaweed to camouflage themselves and hide from predators. This makes them inferior photographic subjects. However, a crab called “Achaeus spinosus” attaches creatures from the hydroids branch to repel potential predators, which is a good subject for photography.

Winner of the Animal Behavior category 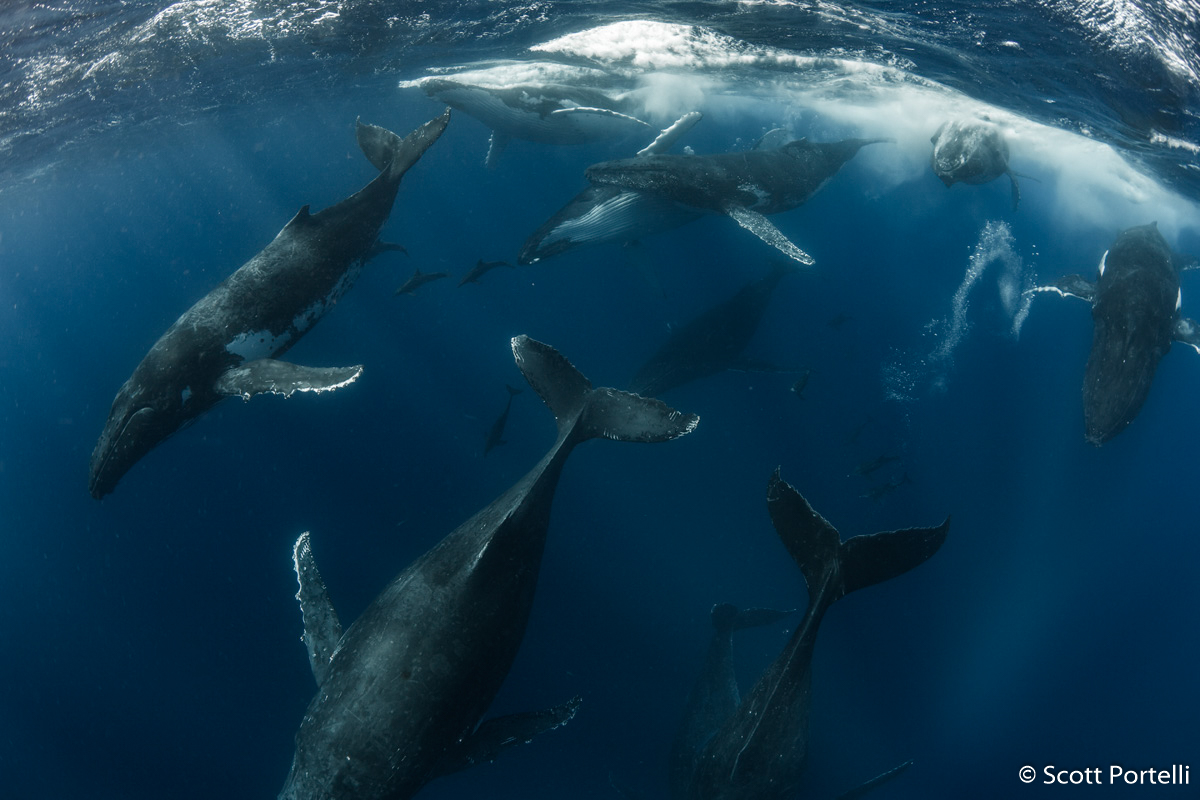 Humpback whales spend a lot of time and energy creating songs. Male humpback whales sing unique and complex music that lasts 10 to 20 minutes and sometimes repeats for hours. The motive of this singing is related to mating rituals. The sounds produced by male humpback whales and their acrobatic movements have made them very popular among tourists. This animal produces echoes, like dolphins and bats, and they can get an image of the environment by analyzing the sound waves resulting from echoes. In this image, several whales compete for the same female. This chase can last for hours or even days, and males can display movements such as bubble net feeding, open-mouth throating, physical contact, loud acoustic sounds, and penetration to hunt this material.

The winner of the animal habitat category 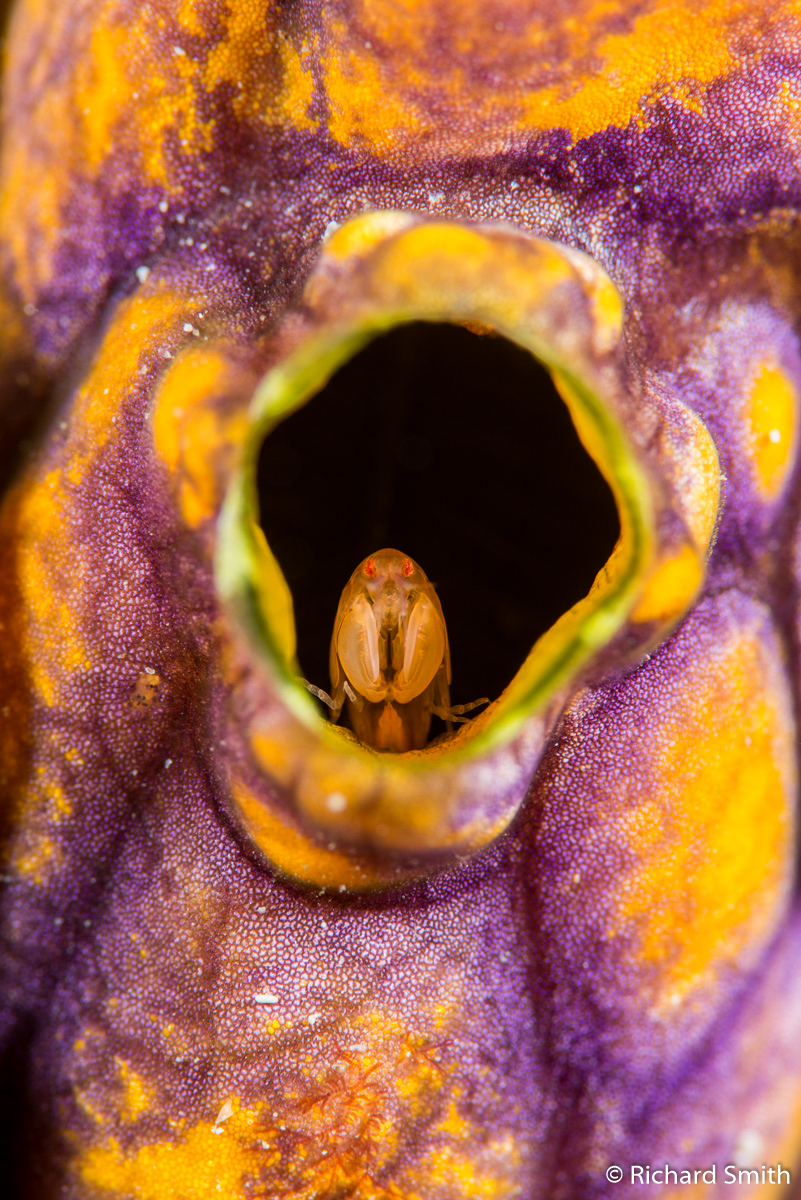 Amphipods are an order of crustaceans that lack a carapace and generally have laterally compressed bodies. The dimensions of amphipods are from 1 to 340 mm, and most have the status of disinfectant or cleaning materials. More than 9900 amphipods have been known so far. According to the photographer, he was searching for miniature seahorses on the reefs of West Papua when he came across this tiny amphipod crustacean. This half to the one-centimeter-long male creature was sitting in the mouth of the sea to protect the female animals and the young inside. According to an amphipod expert, this is probably a new species. 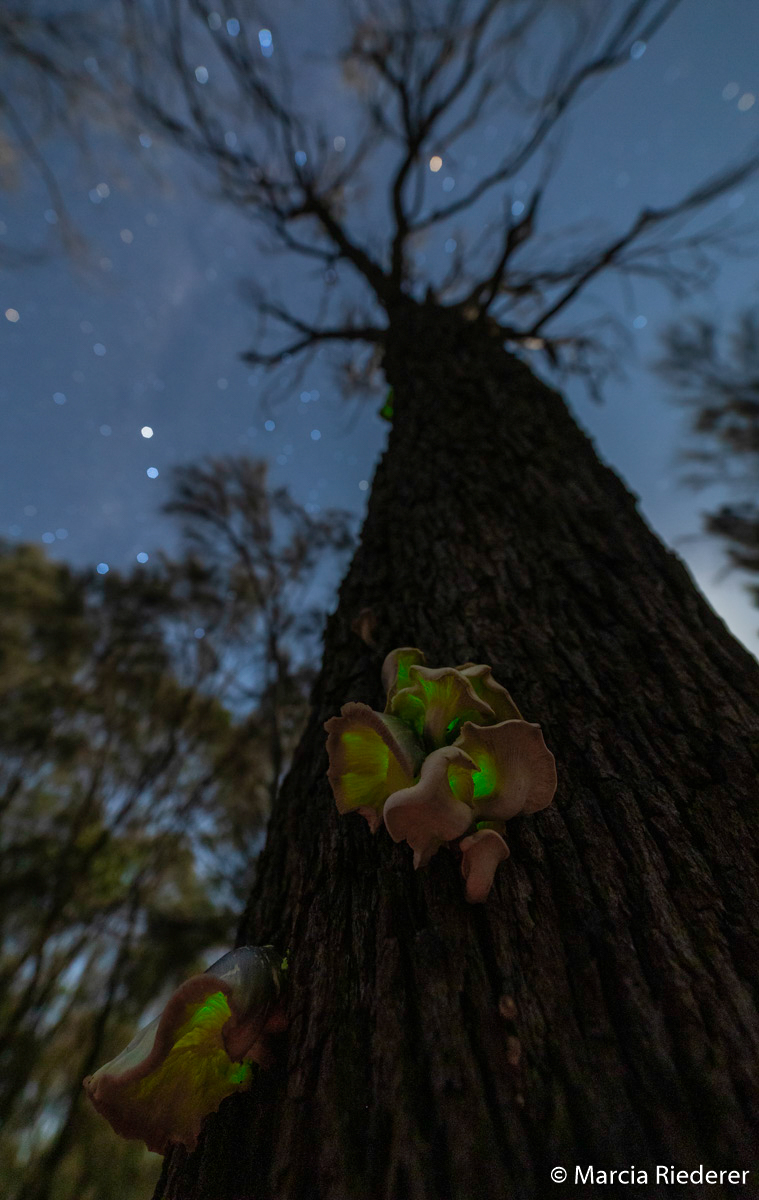 The Elusive Ghost Mushroom show starts after dark When its night-green glow shines through the pine forest on the Bellarine Peninsula. This mushroom may seem magical, but bright light helps attract insects, disperse spores, and spread fungi. Mushrooms such as the ghost mushroom produce a strange light in the forests of Australia. There are more than 90 species of glowing mushrooms; the most beautiful are the ghostly mushrooms with their bright green light that acts like a reading light.

The winner of the landscape category 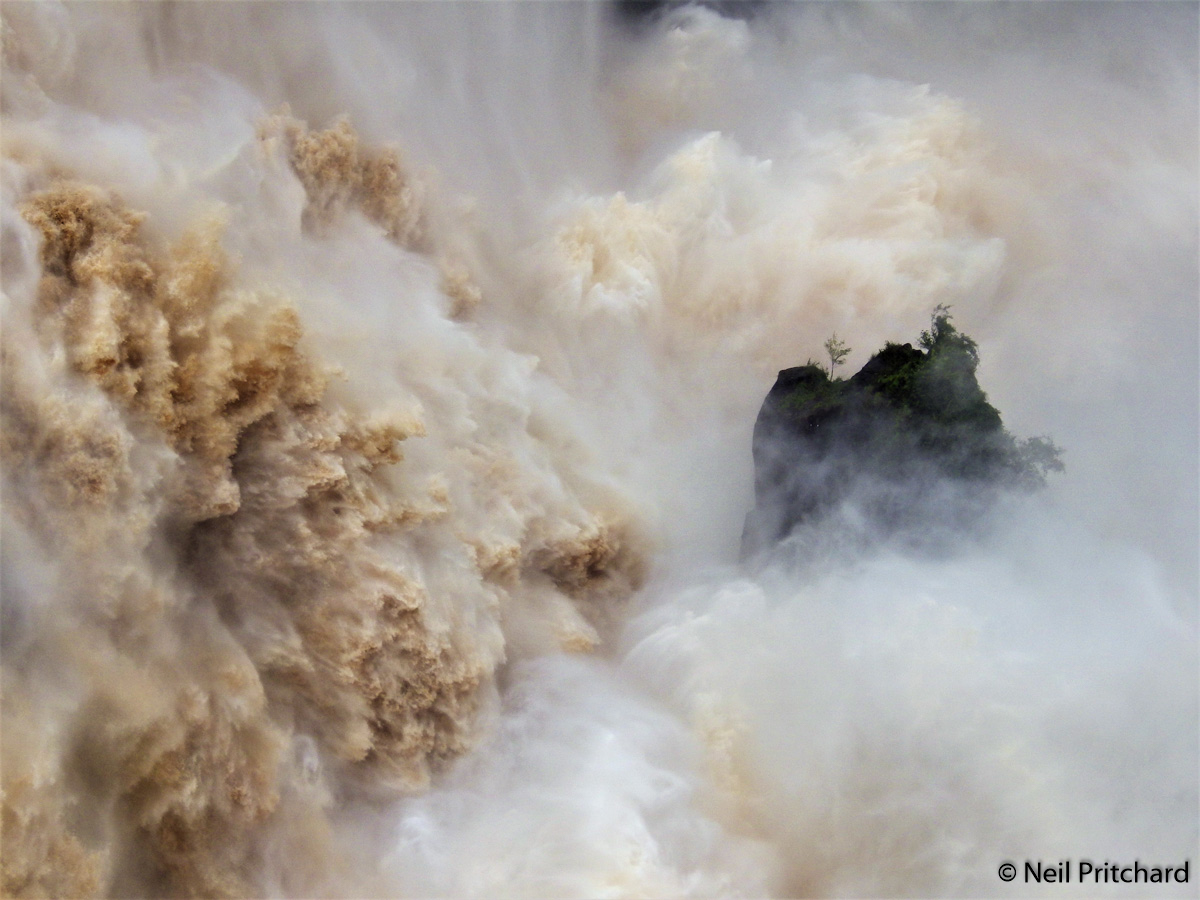 Barron Falls is a steep waterfall on the Barron River where it flows down from the Atherton Tablelands to the Cairns Coastal Plain in Queensland, Australia. When the Barun waterfall overflows, the peaceful scene of this place becomes very disturbed; a massive volume of water enters the coastal plain. The intensity of this image’s violence and the roar have turned the recording of this image into an unforgettable experience. 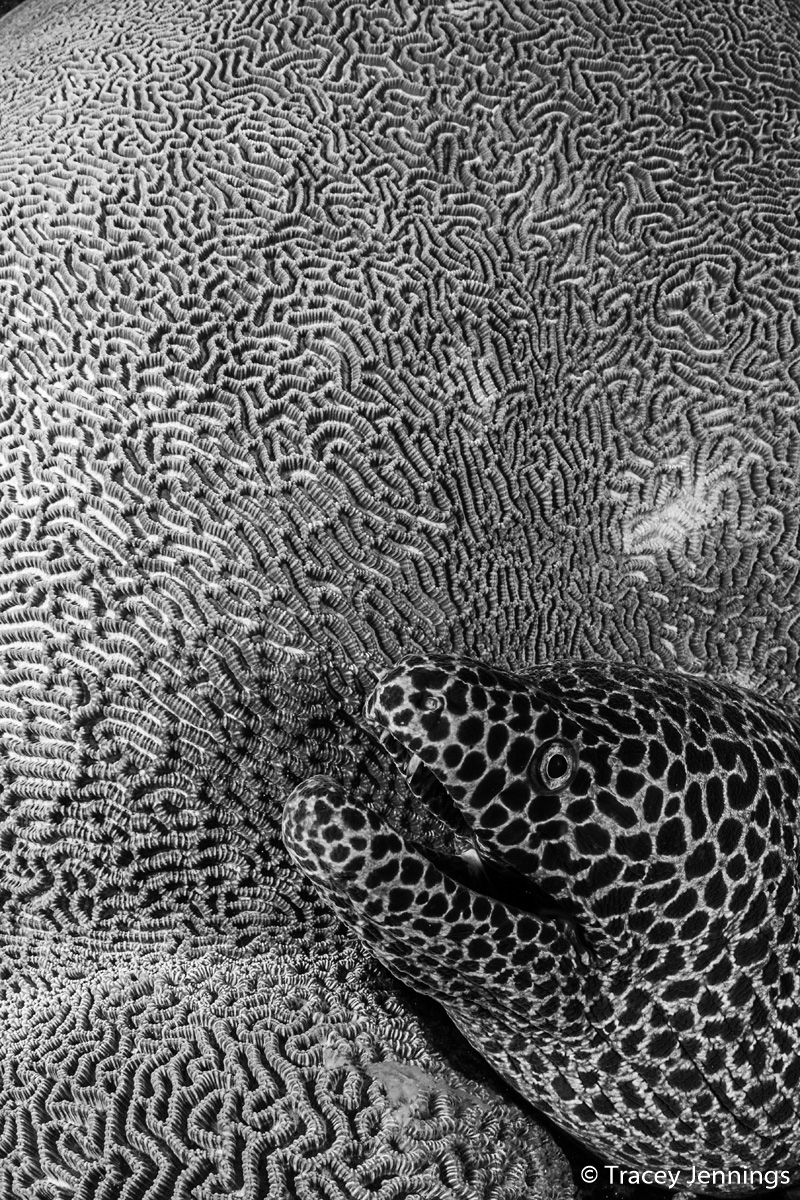 I came across this fantastic juxtaposition of honeycomb eel and coral. Monochrome screams in this photo, But this is one of the significant disadvantages of underwater photography, and you cannot change your lens to suit the subject. However, I slowly got as close to the snake as possible, increasing the depth of field and adjusting my strobe light to illuminate the coral and eel.

The winner of the youth division 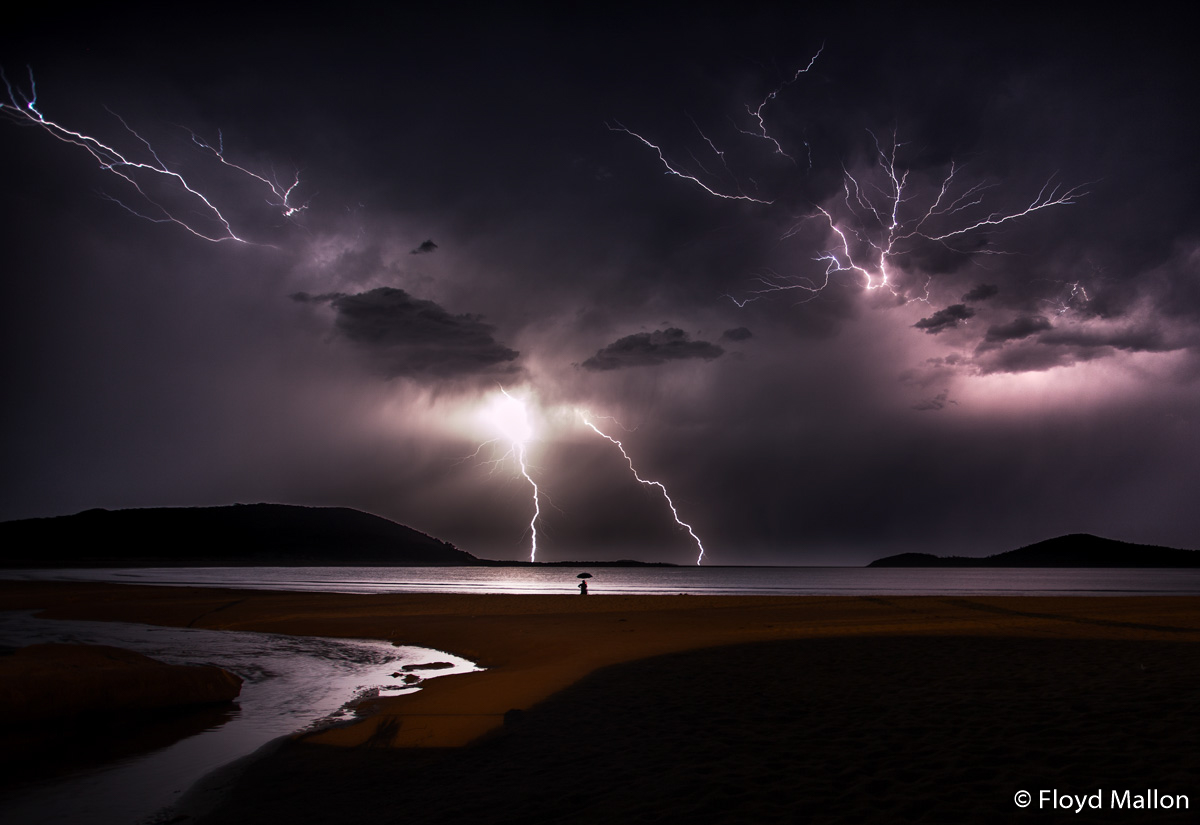 The night I took this picture, the most amazing lightning show I’ve ever seen happened. This thunder continued for several hours with continuous lightning and loud noise. I focused on the man standing at the beach’s edge with an umbrella to improve the image and add a sense of scale to the idea. A sense of scale is a visual tool for understanding the size of an image. This tool allows us to create depth and show an element of drama in the scene. Scale is related to the ratio and size of one thing to another. One way to make that relationship is to purposefully highlight items in the photo so that the eye can immediately recognize and relate to them. People, trees, animals, cars, etc., are all objects that give scale and proportion to a scene.

Winner of our Impact category 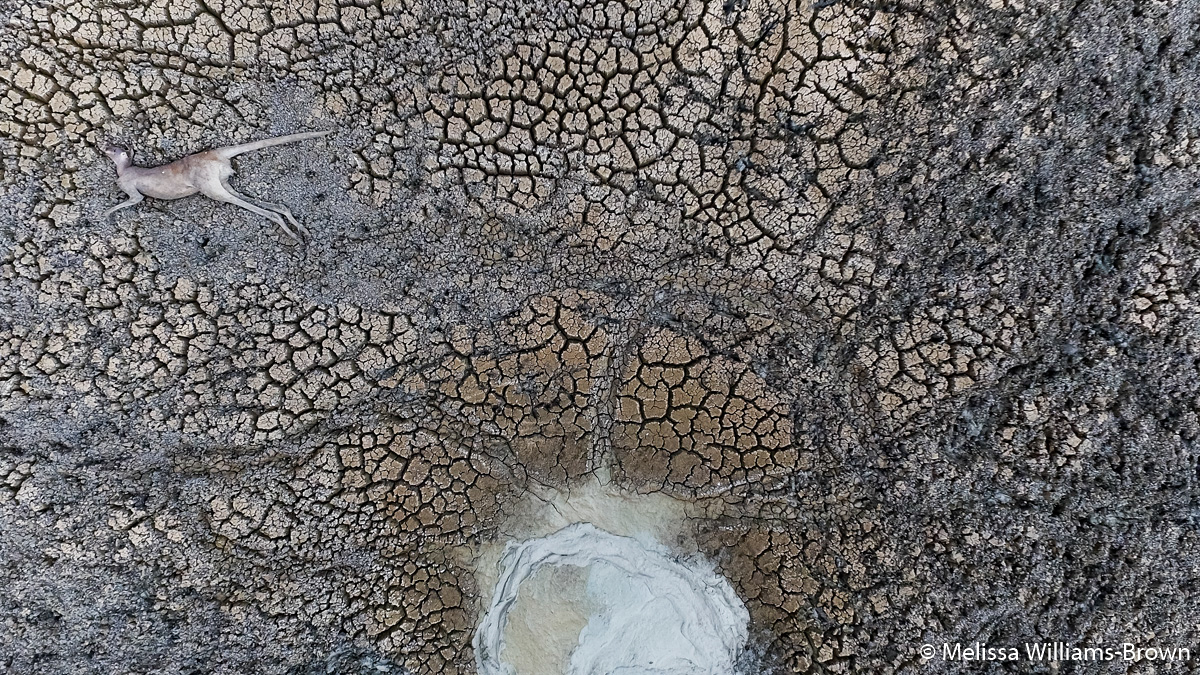 Lake Menindee was a chain of shallow, temporary freshwater lakes connected to the Darling River to form a storage system. This lake was located near Mehandi in the western region of New South Wales, Australia. Lake Menindee was deliberately drained in 2016 and 2017, as New South Wales experienced a prolonged drought. Animals and birds in this place are desperately looking for water and food, and due to these natural events and human interference, what is left for them is very little. Lake Cavendilla is now just a dry lake bed filled with the remains of native Australian animals instead of water. 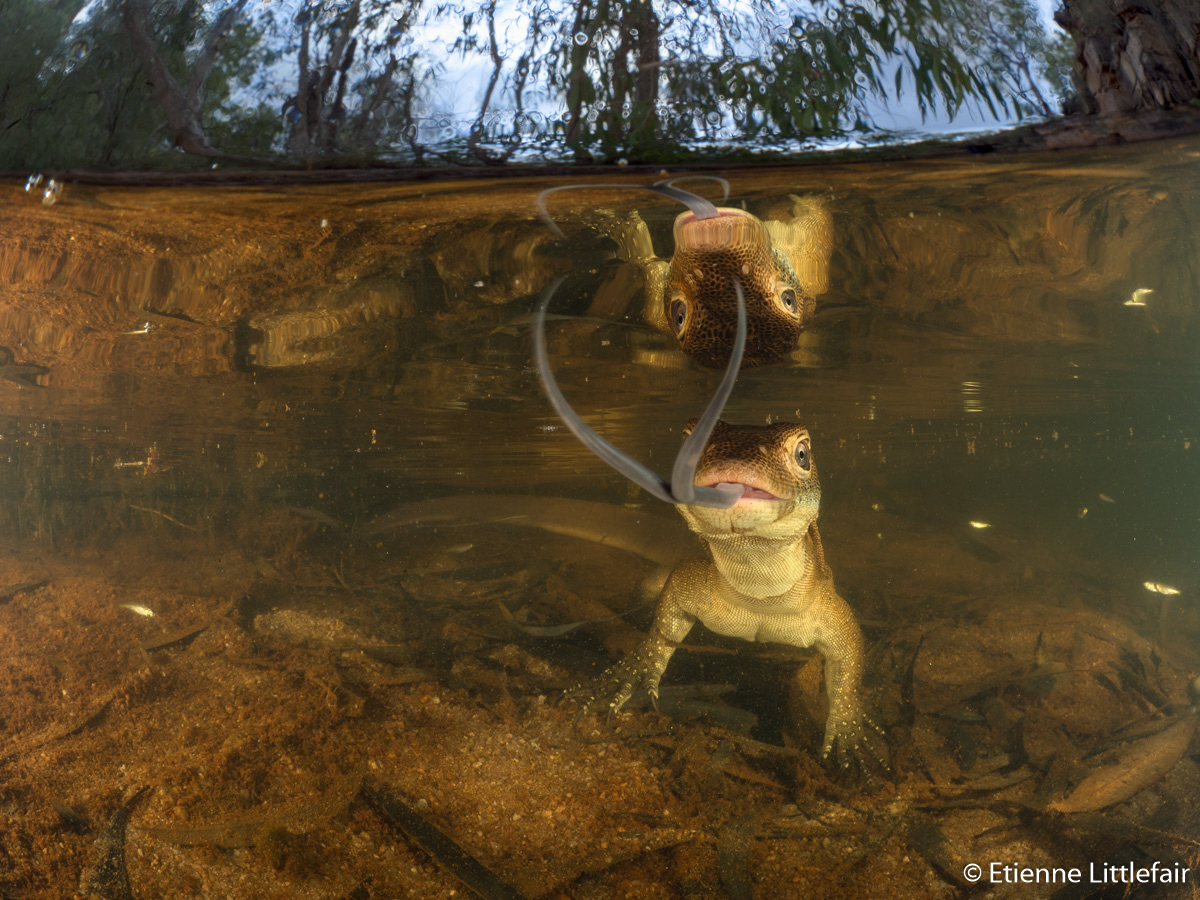 Mertens water monitor is a species of lizard in the Varanidae family. This species is widespread in northern Australia and is threatened by many opportunistic hunters. This specimen of this lizard very boldly approached me to check out the good-looking lizard’s reflection on my camera, but unfortunately, it was staring at its reflection, not at the mate of its dreams. Mertens water monitors are very curious. 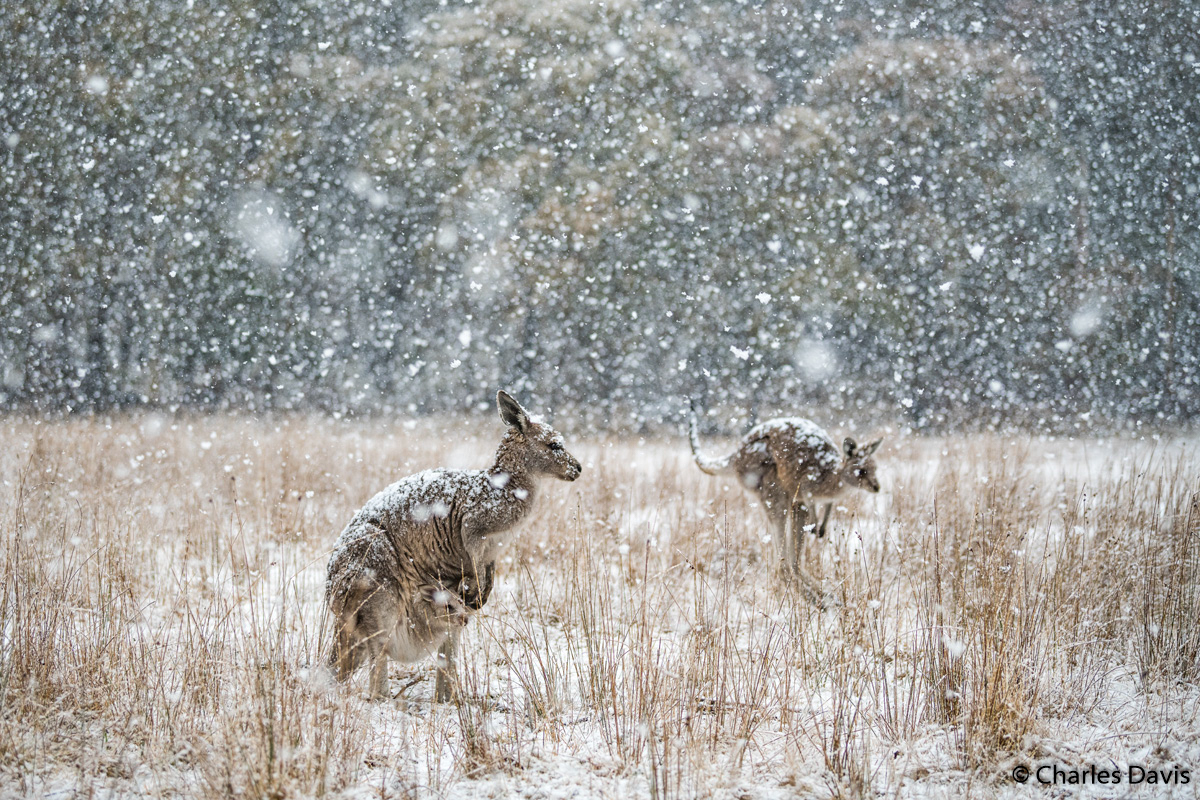