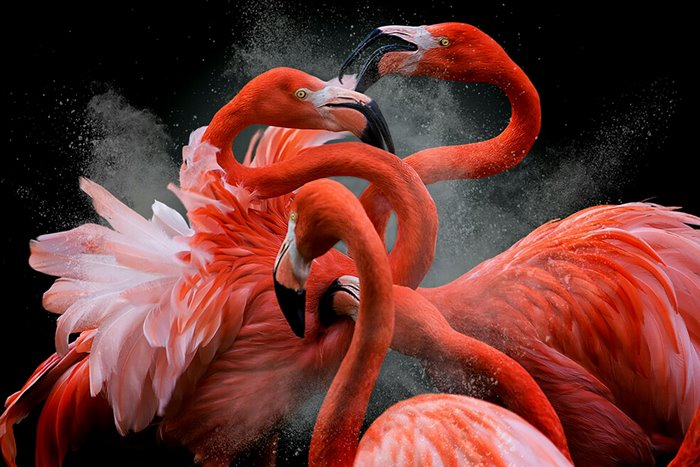 The Results Of The Bird Photographer Of The Year (BPOTY) Contest Were Announced, And The Artist’s Works Were Published In The Virtual Space.

BPOTY Photography Contest, Photography is one of the most beautiful arts today. So far, many people in this field of art have managed to record beautiful works.

The artists of this field can specialize in creating works of art in specific areas; One of the unique branches of this art field is photography of nature, animals, and humans, in each of which the photographer focuses on a specific subject.

For example, a person skilled in capturing portrait images cannot be as successful as an artist engaged in wildlife photography in capturing various works of nature. Generally, successful photographers of a particular style spend many years getting their best work.

Various competitions are held annually to select the best works in different styles. In this article, we have discussed one of the biggest competitions in the field of wildlife.

The “Bird Photographer of the Year” competition has announced the winners of 2020. This year’s overall winner was Majid Al-Zaabi from Verdau, Norway, who captured an outstanding artistic and impressionistic photo you can see below. This picture is taken from two European Shags. 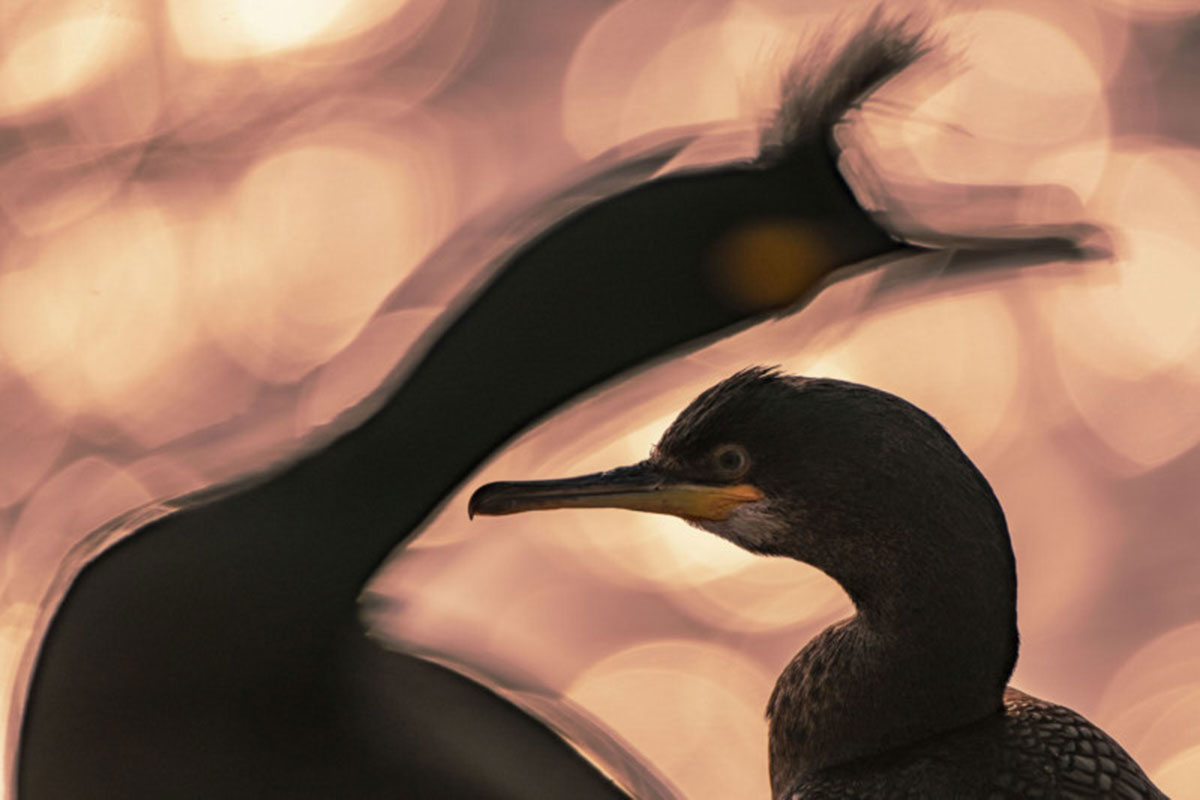 Al-Zaabi, the artist who won £5,000, told the competition officials:

I took this photo in April 2019 while visiting the famous Norwegian seabird island in Vardø. A place full of birds provides endless opportunities for photography. There are many opportunities for creative composition where you can play with the background and foreground of the images. I like the out-of-focus goose in this image. That creates a unique frame for the other bird in focus.

The sea bokeh is also beautiful as the sunset approaches. I recorded this image with various experiments. My goal was to create artistic and impressionistic photos of geese, and I hope I have achieved my goal with this image.

In the following, you can see other pictures recorded by the winners of the Bird Photographer of the Year competition. 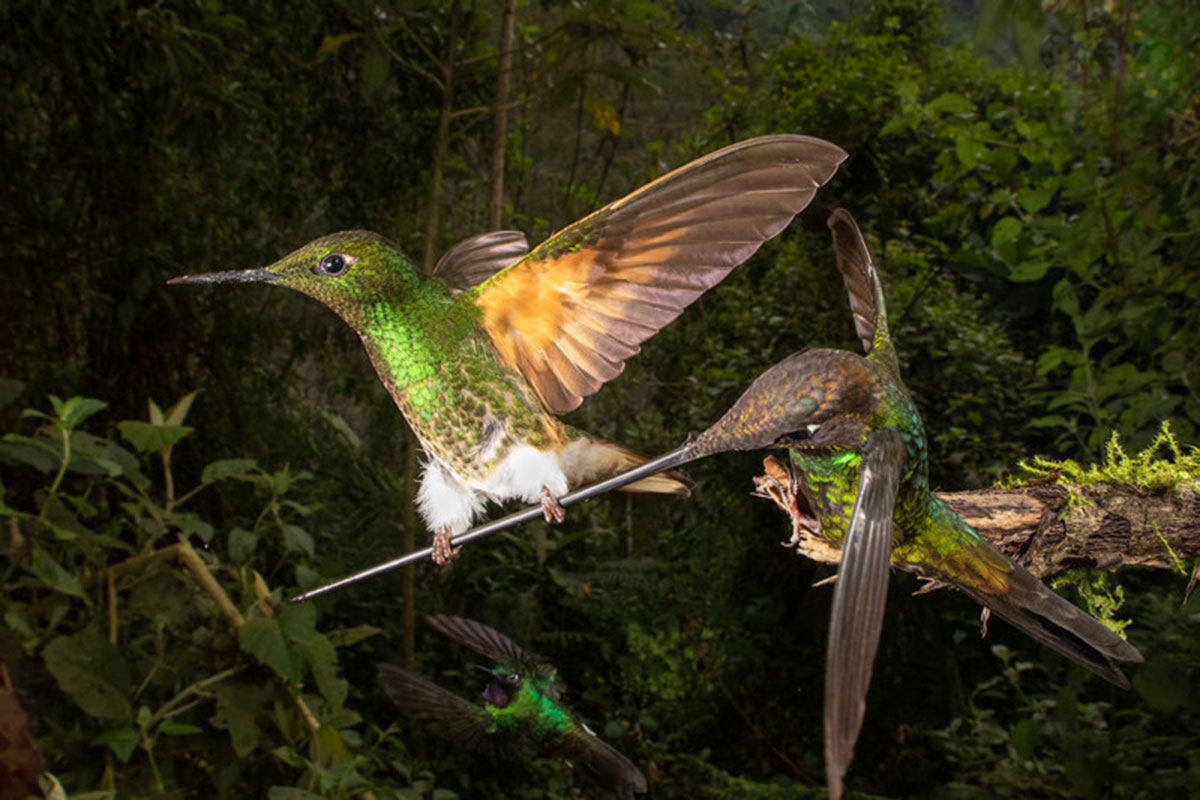 Niklas Rosens from Sweden captured the image you are viewing. This image of a sword-billed hummingbird has won third place in the “Bird Behavior” category. In this picture, you can see a hummingbird holding the beak of another bird as if sitting on it. The name of this work, ROPEWALKER, means rope walker, which is a beautiful name. 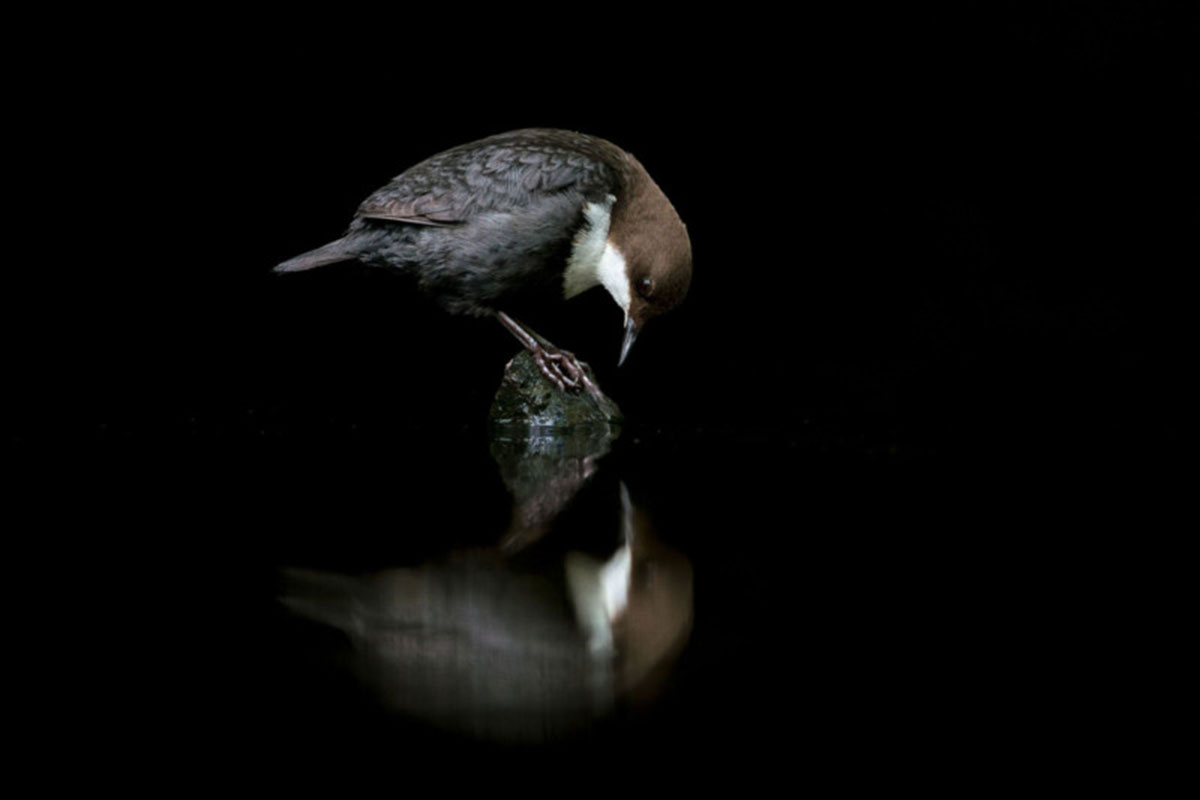 The image captured by Terje Kolas from Norway has won the bronze award in the “Best Portrait” category. This image shows a White-throated Dipper looking at its reflection in the water. This unique work of art is named A DIPPER IN THE MIRROR, which means “a dipper in the mirror” in Persian. 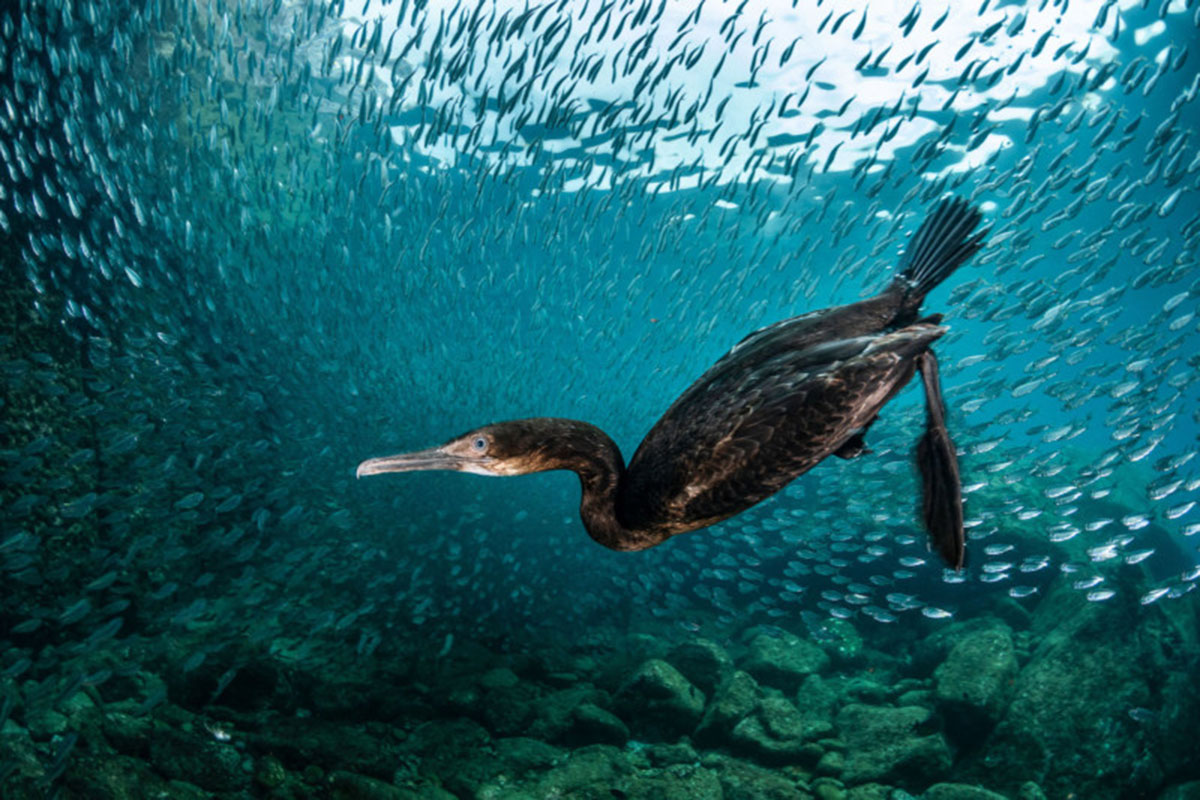 Another goose can look for prey underwater in this work of art.

By recording this beautiful image, Greg Lecour from France won second place in the “Best Portrait” category. The name of this photo is CORMORANT UNDERWATER VIEW, which translates to “underwater view” in Farsi. 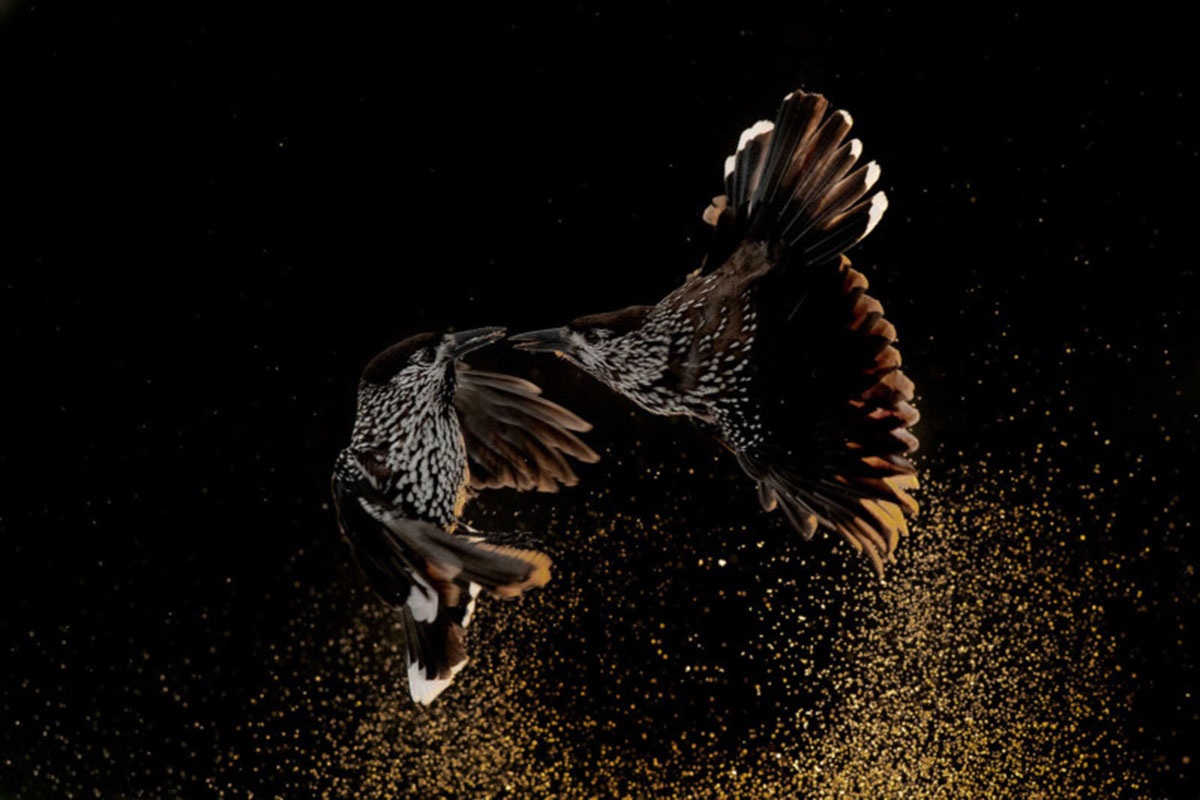 The following photo was submitted to this contest by Roelof Molenaar from the Netherlands. In this beautiful picture, two birds are fighting each other. One of the interesting points of this picture is the fight between these two birds between the earth and the sky, which have moved the snowflakes with them. This unique work of art has won first place in the “Behavior of Birds” category. The name of this artwork is NUTCRACKERS FIGHTING IN THE SNOW. 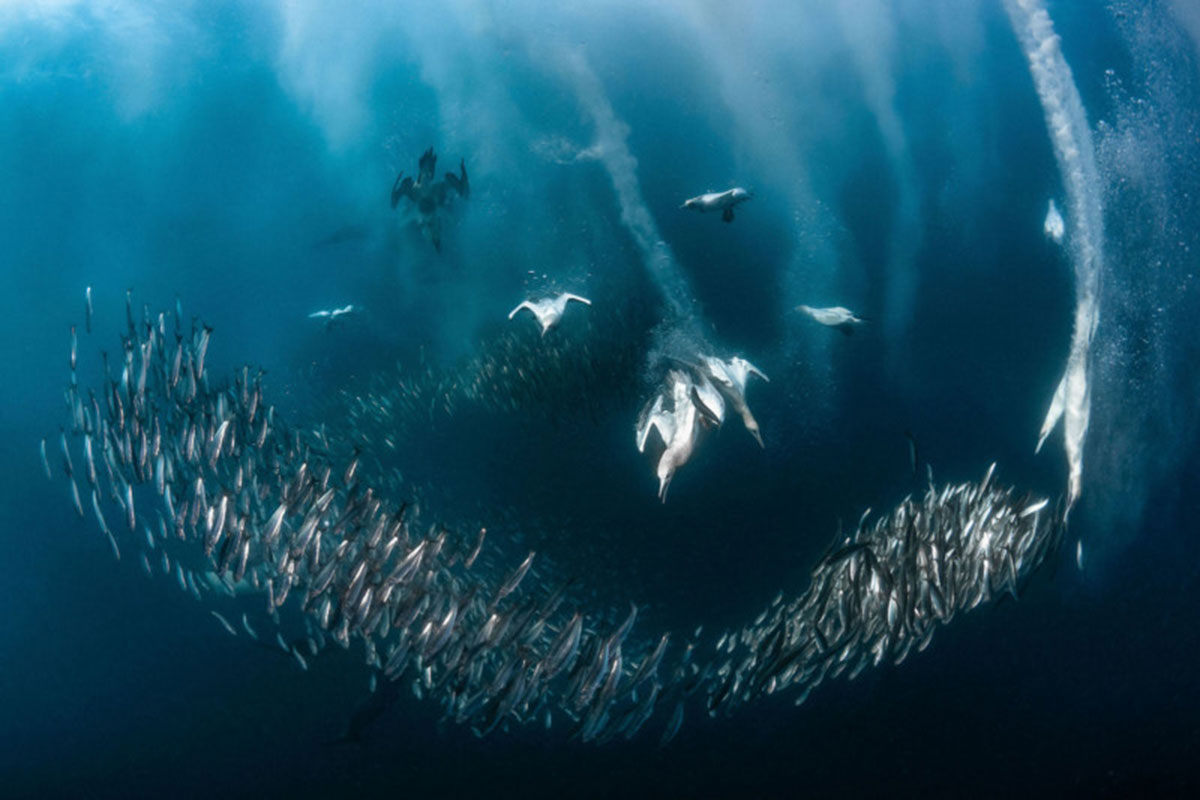 Another image from France has been sent to this competition. Greg Lecour captured an image of St. John’s Harbor in South Africa that won a Silver Award in the “Bird Behavior” category. This charming image shows a group of fish that have formed a smile while escaping predators. The name of this artwork is FEEDING FRENZY. 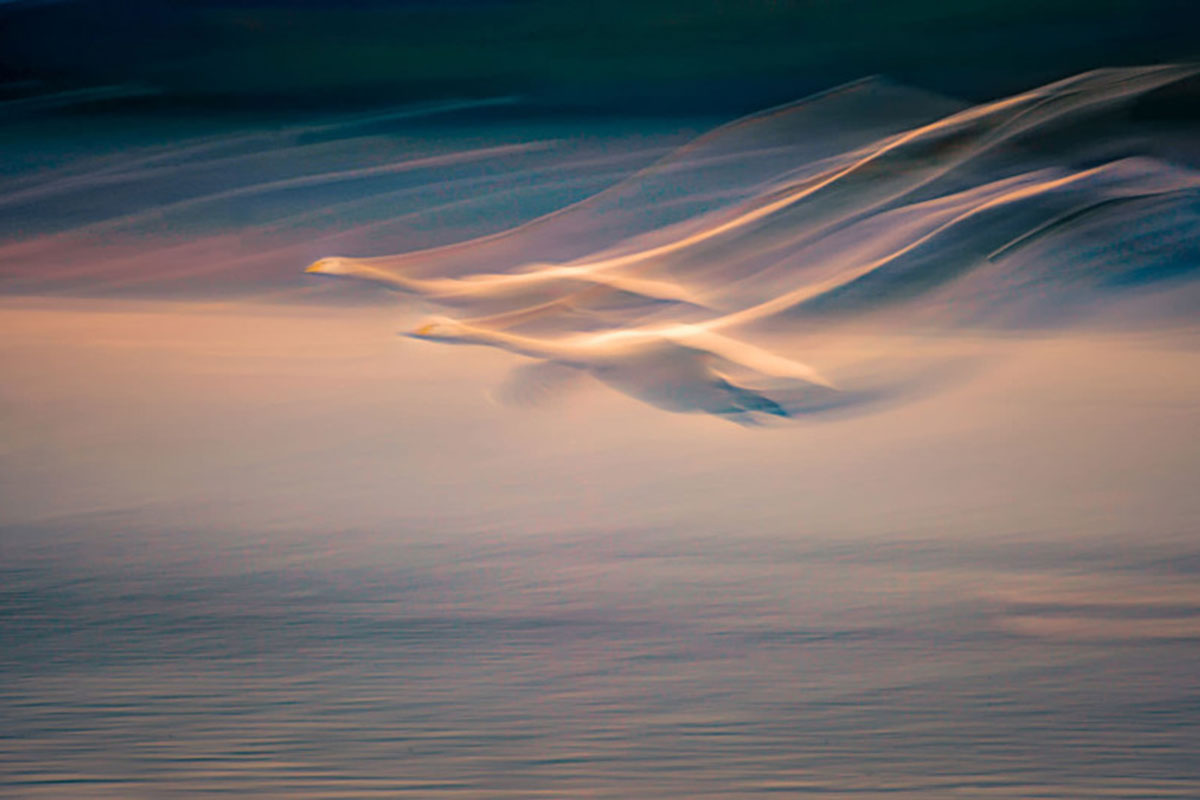 An artwork from China by a person named Xu Qing has won third place in the “birds in flight” category. In this photo, the bird is photographed in a state that resembles a beautiful fairy that is landing on the ground; For this reason, the name of this image is FAIRY LANDING ON EARTH, which translates to “Fairy Landing on Earth” in Farsi. 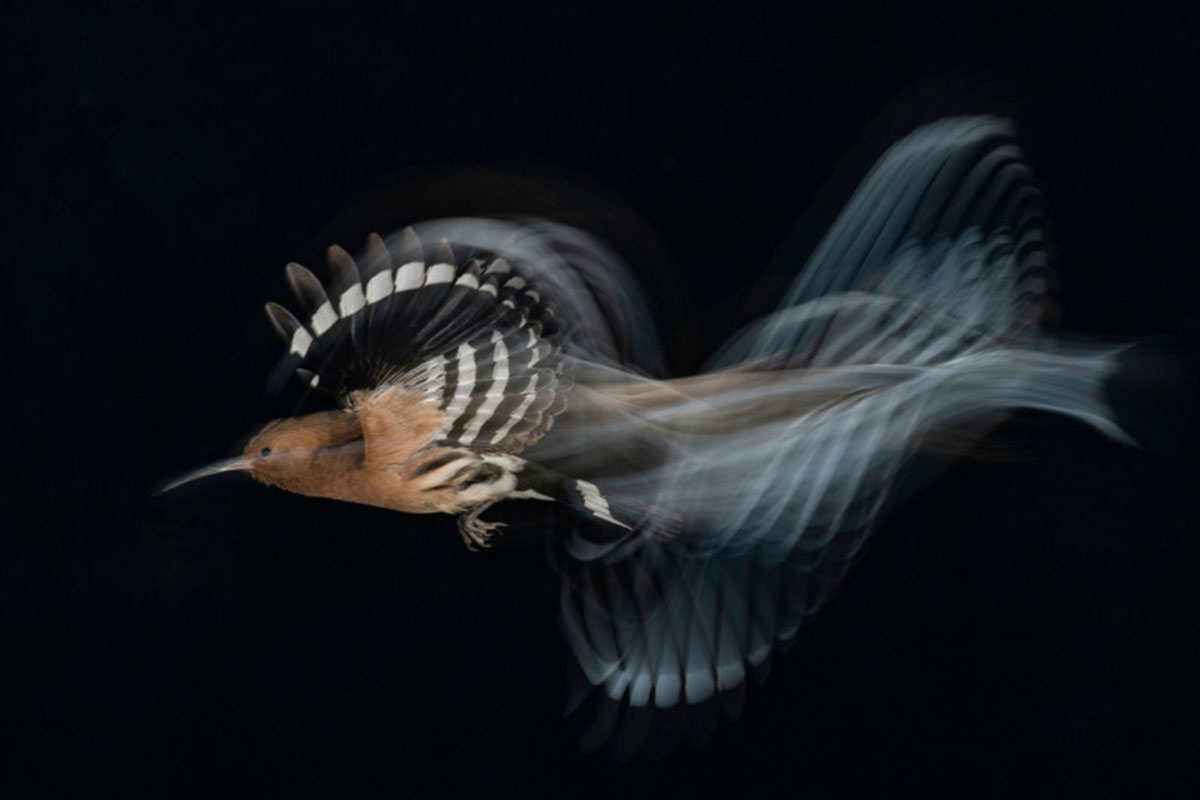 Gadi Shamila from occupied Palestine has managed to record a beautiful picture of the moment of the flight of a fascinating bird. The recorded photo of this hood made its photographer win first place in the “birds in flight” category. The name of this artwork is HOOPOE FLIGHT AT LOW SPEED, which translates to “Hoopoe flight at low speed” in Farsi. 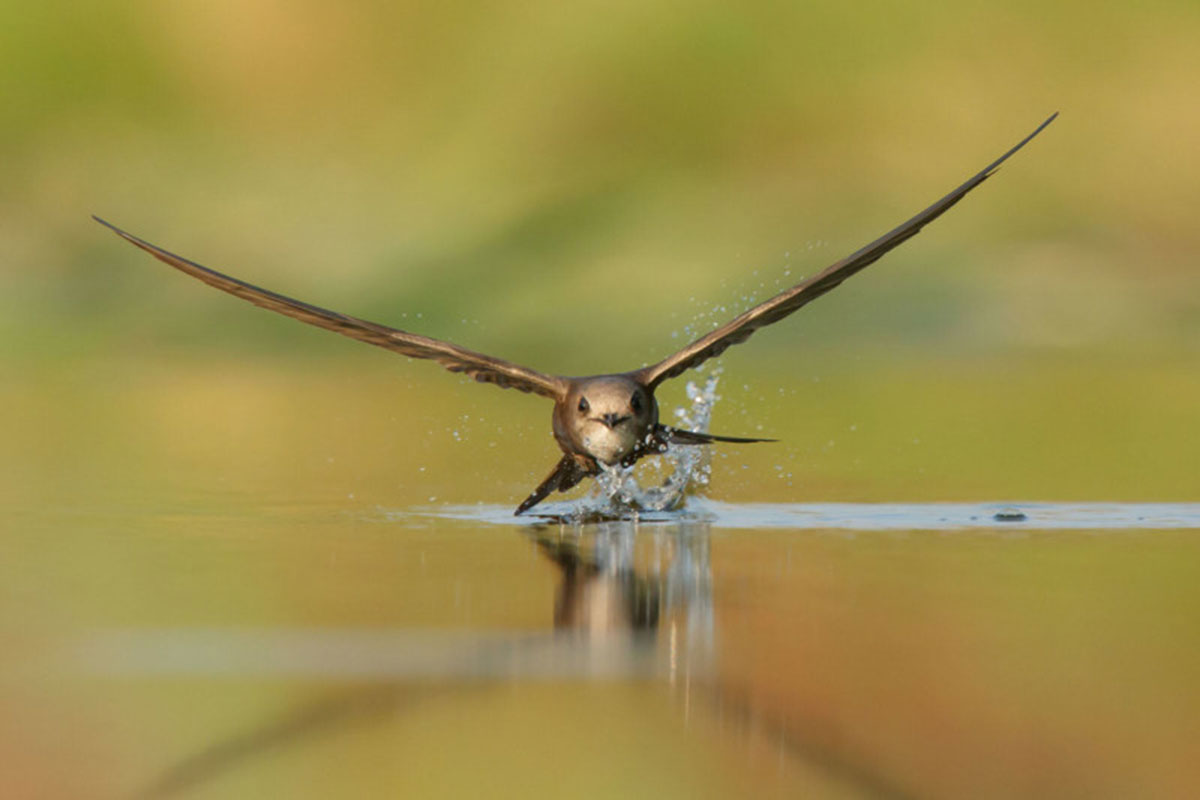 A wonderful image by Nikos Fokas from Greece, who won second place in the “Flight of Birds” category. In this work of art, a bird that has touched the water’s surface while flying can be seen. This photo is named TOUCH AND GO because of the bird’s movement, which means “touch and go.” 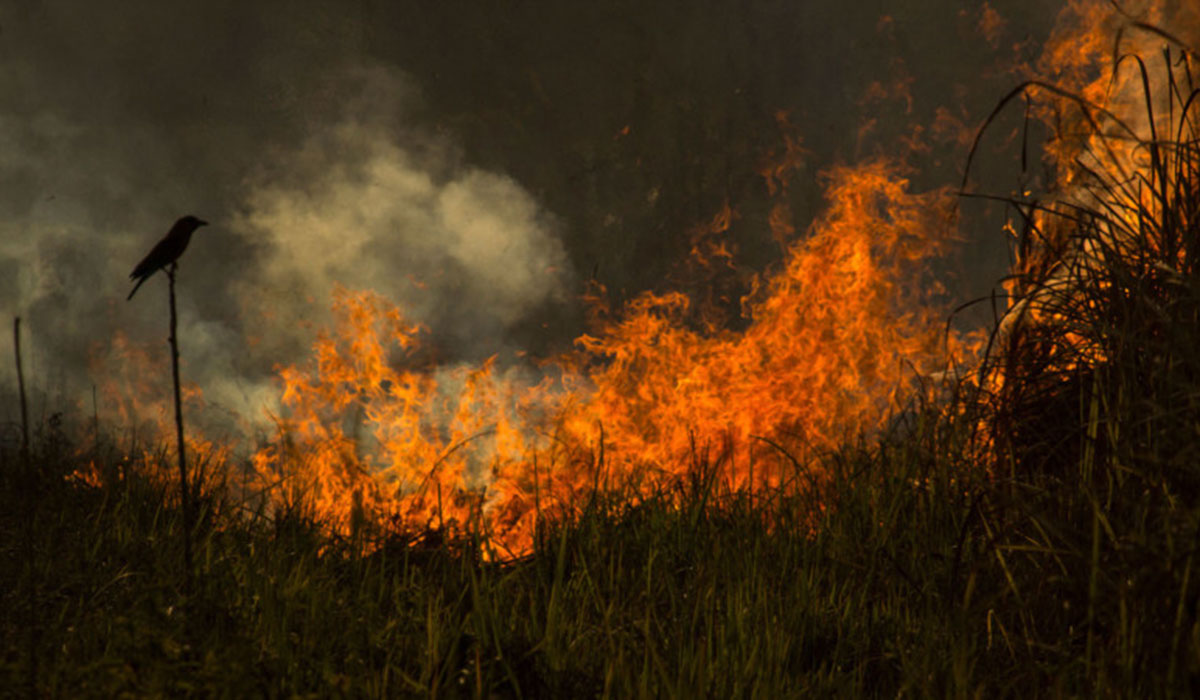 The name of the following artwork is A NEW BEGINNING.

The image, whose name means “a fresh start,” was captured in India’s Kaziranga National Park and showed a bird peering into fiery grass. The name of the photographer of this work is Swayamsida Mohapatra. He won the bronze award in the “Birds in the Environment” category. 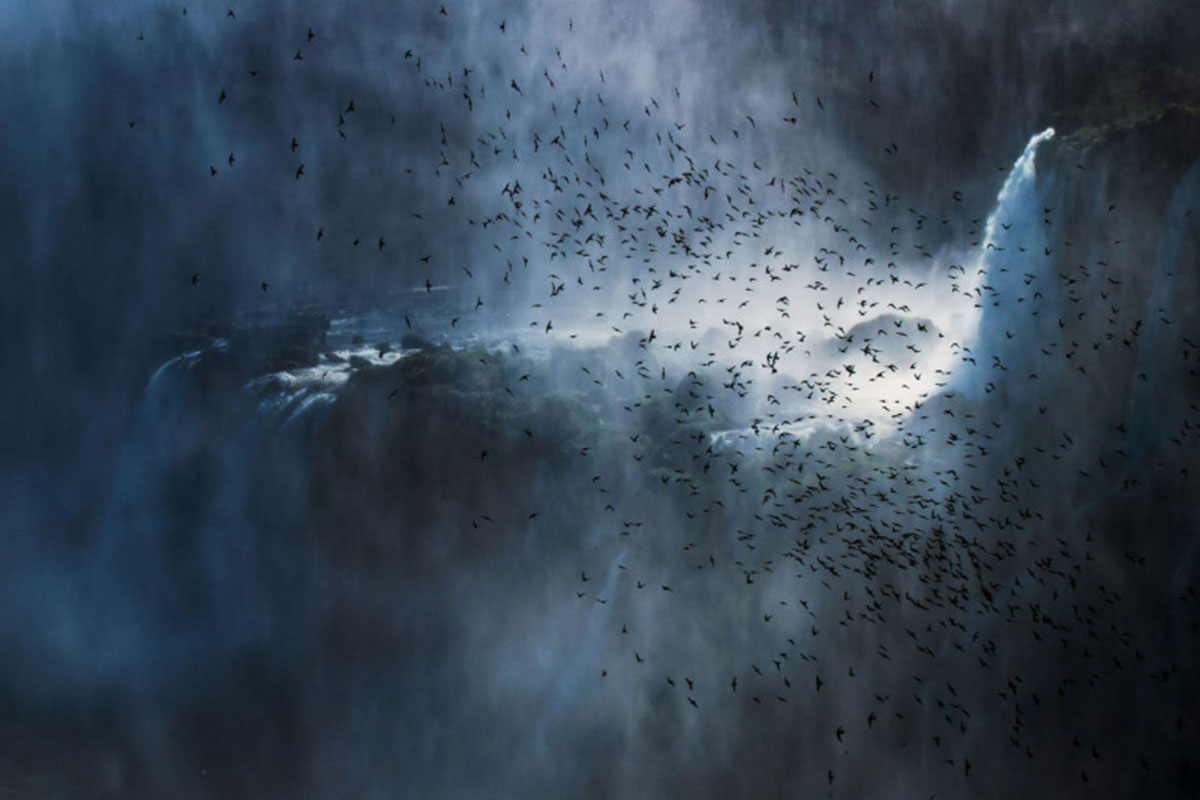 Francesco Filippo Pellegrini from Italy won first place in the “Birds in the Environment” category by sending this unique picture. This photo of Iguazu Falls was recorded in Misiones, Argentina. The name of this work of art is SWIFTS OVER IGUAZÚ FALLS, which means “Swifts over Iguazu Falls.”

This image was captured by Paul Hermansen in the mountains of Glass field. This Norwegian photographer won the silver award in the “Birds in the Environment” category with this photo. A giant owl can be seen on top of a tree as if it is waiting for the end of this cold and the arrival of warmer days. The name of this work is HAWK OWL IN A MOUNTAIN FOREST, translated into Persian as “Hawk Owl in the Mountain Forest.” 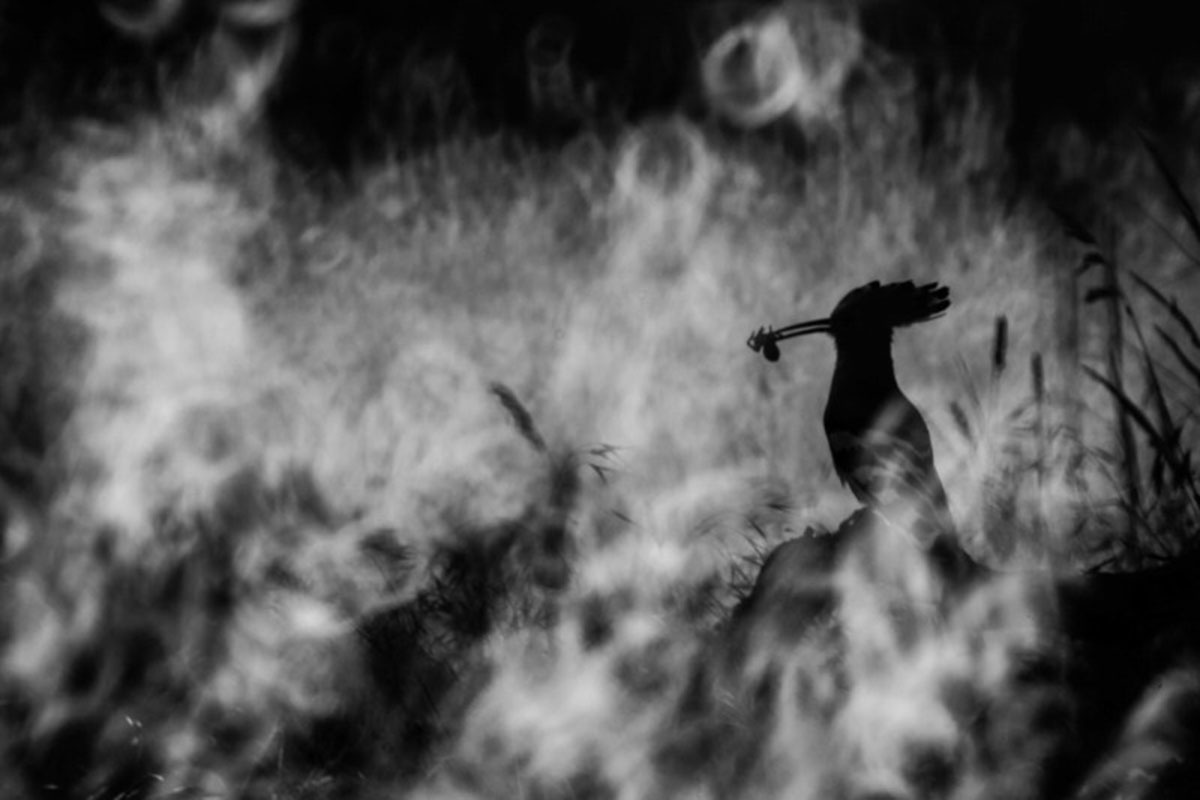 Juan Pablo Plaza Pozo from Spain submitted an image for the bird competition showing a common hooded owl in the wild with a spider in its beak. This image won third place in the “black and white” category. This attractive work has the short and beautiful name PYROGRAPHY, which means “painting” in Farsi. 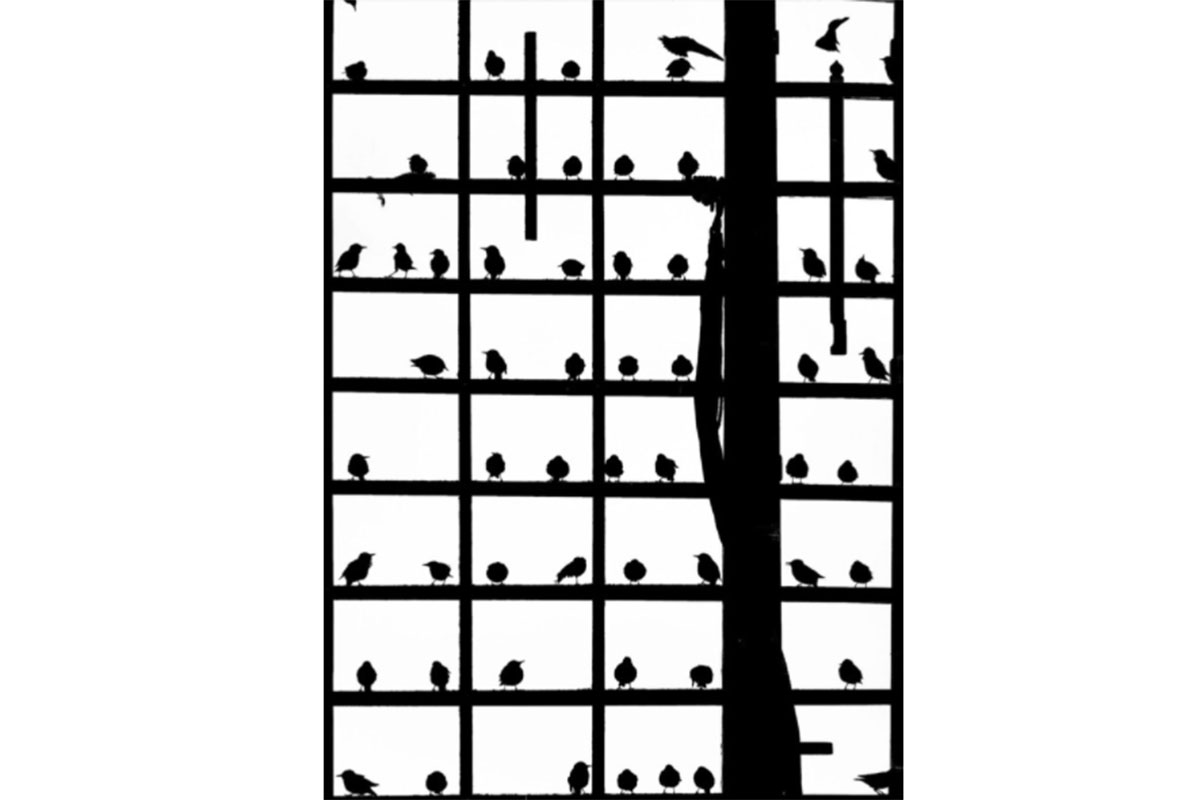 In this attractive picture, various birds are seen in small frames, called “The only room available” in Farsi. It is as if all these birds are residents of different units of the same apartment. This photo can create many stories in the audience’s mind. 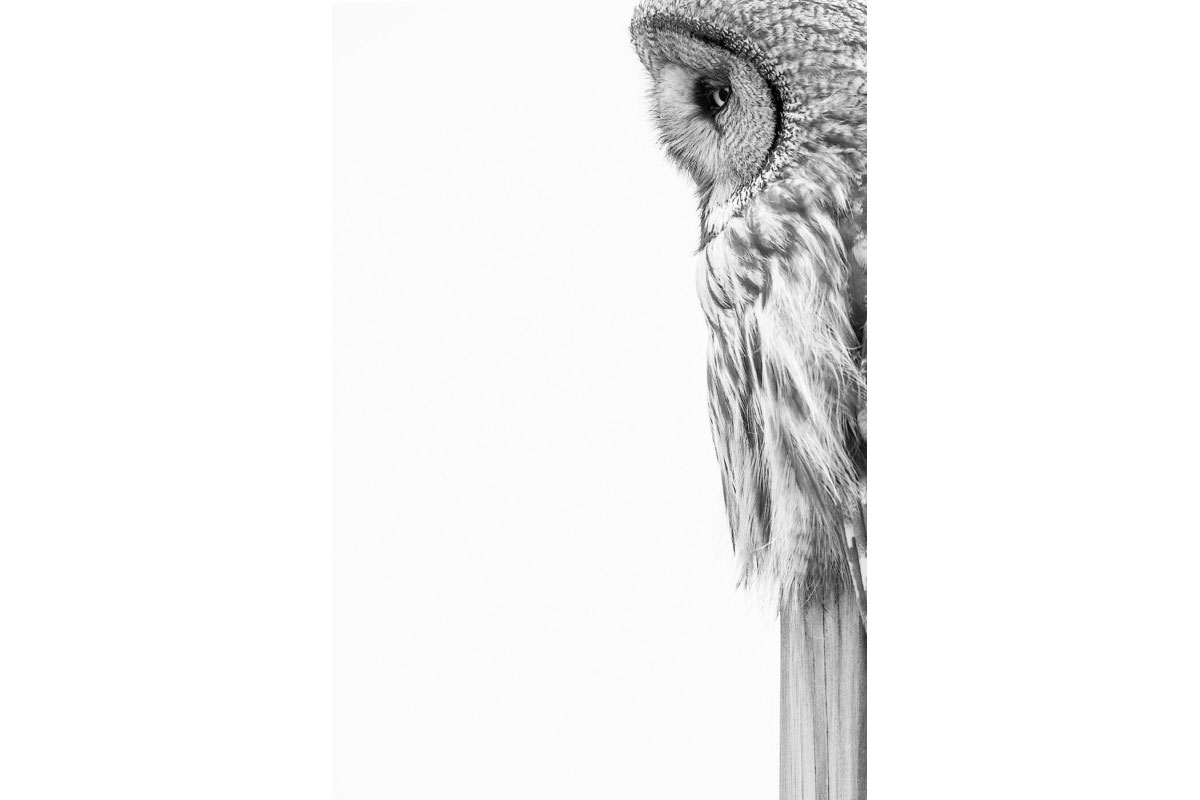 Image captured by Daniel Stenberg from Sweden, who won silver in the black and white category. On the right side of this beautiful photo, an owl can be seen looking at the camera with its penetrating gaze. The name of this work of art is chosen correctly. Stenberg called this picture GREAT GRAY OWL, which translates to “huge gray owl” in Farsi. 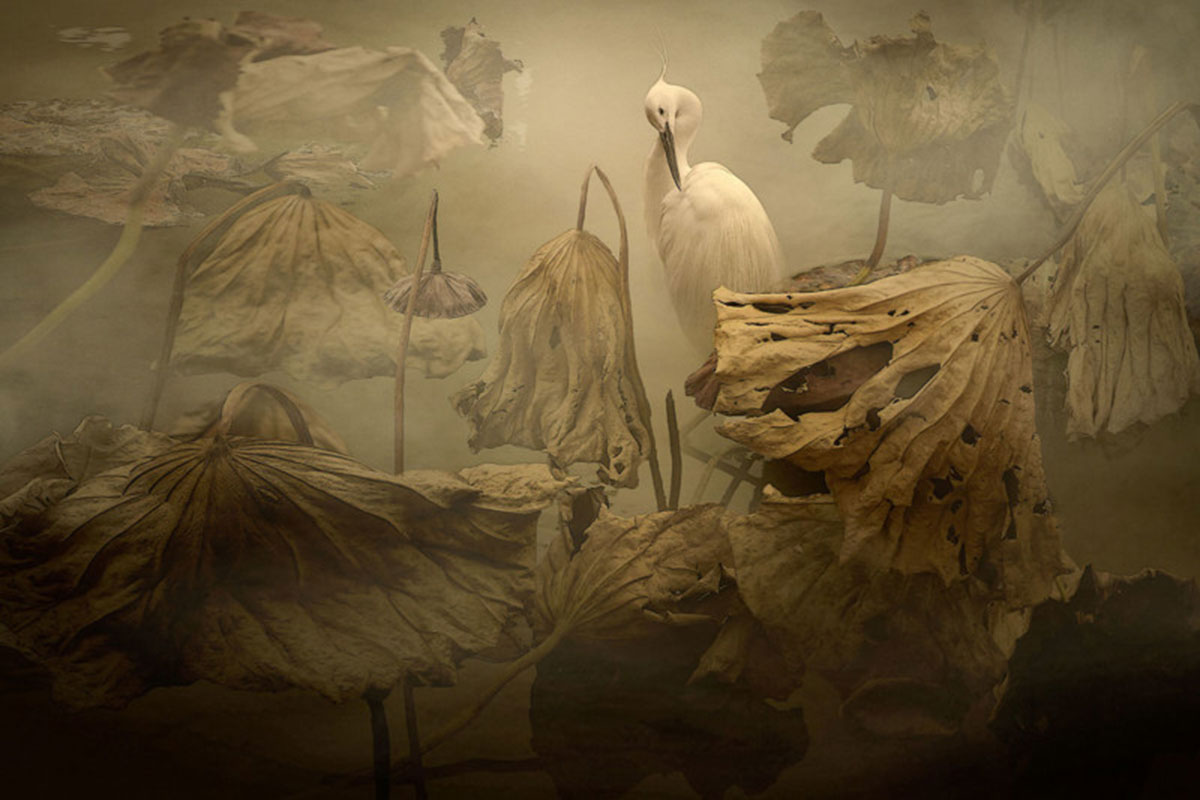 A Chinese artist won a bronze award in the “creative images” category by registering this image. Chengbo Sun is the person who took this photo and submitted it to the bird photo contest. The name of this charming artwork that shows a heron among plants is MAKE-UP. 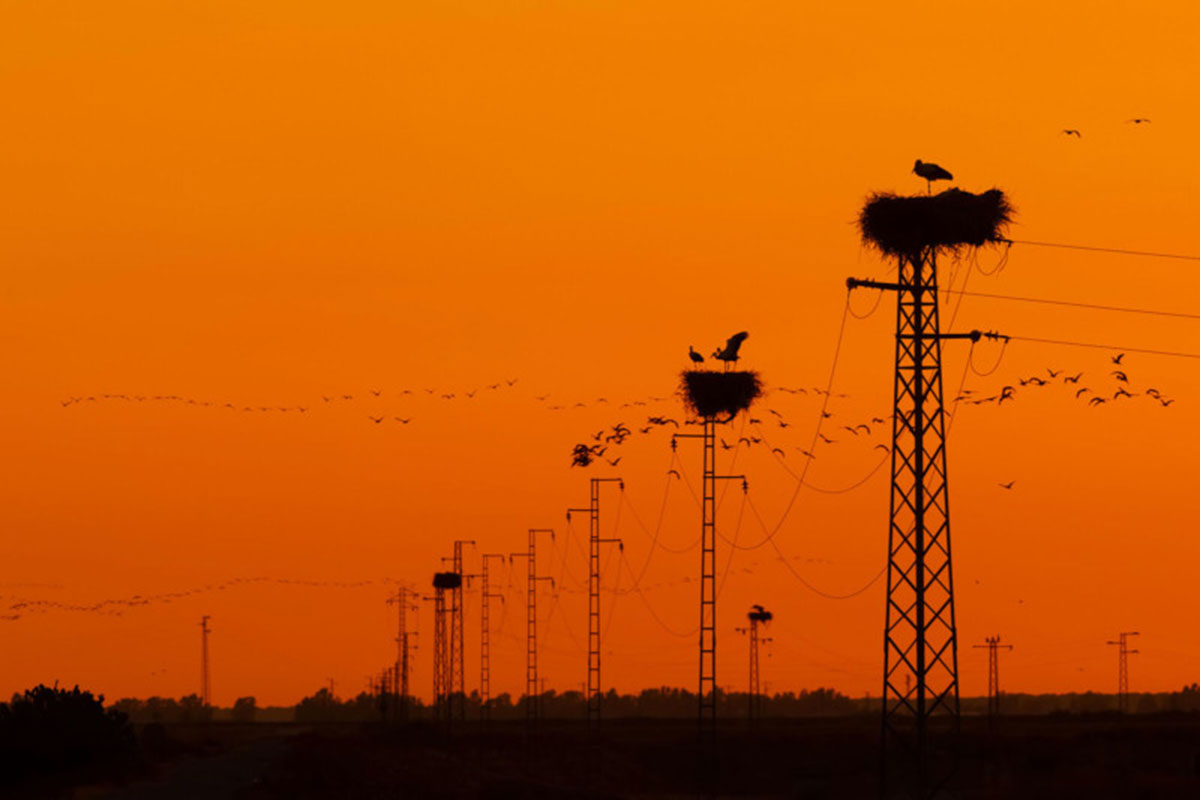 In this photo, white storks can be seen that have built a nest on top of the electricity pylons. Carlos Cifuentes captured this fascinating image in Spain. His work won a bronze award in the “Garden and Urban Birds” category. The name of this image is ELECTRIC. 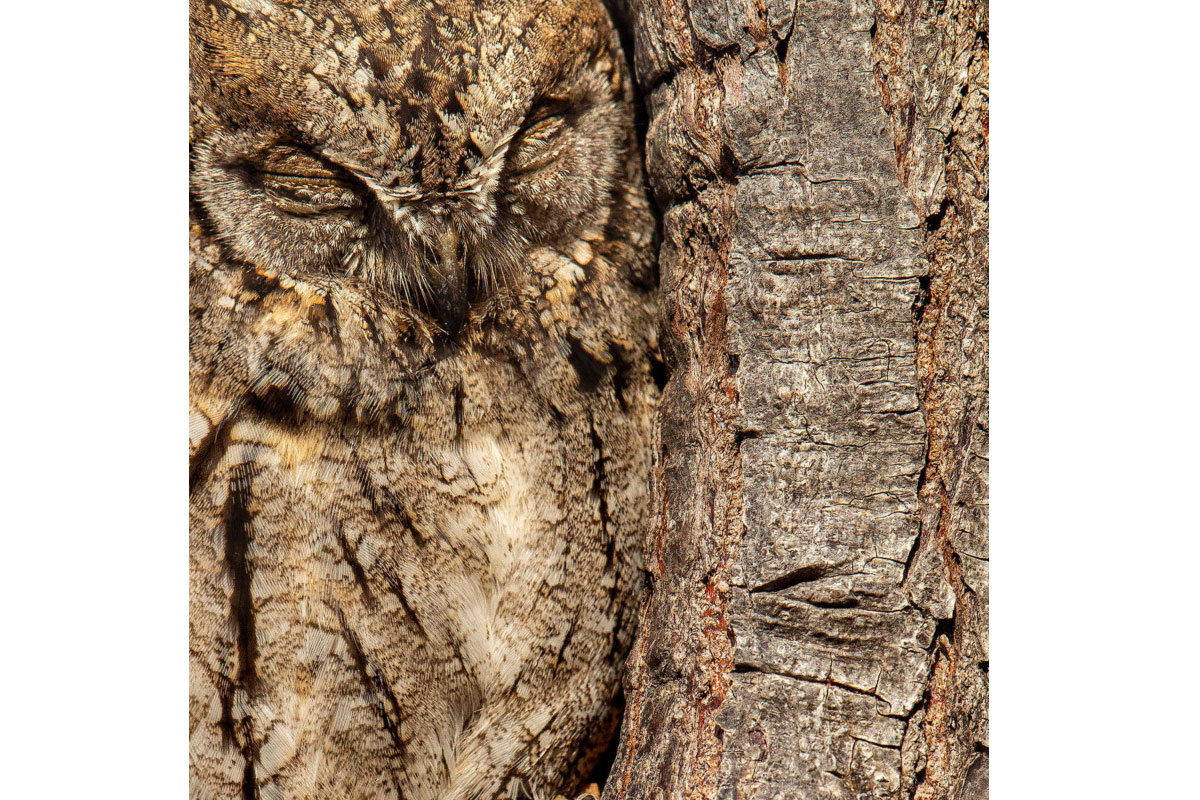 Finally, a work of art called PERFECT CAMOUFLAGE can be seen, which means “superb camouflage” in Persian. Kibbutz Hatzur and Moshe Cohen are the owners of this work. This image won the gold “attention to detail” award. The reason for choosing this work to win first place in the mentioned category is straightforward.

Now in its fifth year, the Bird Photographer of the Year competition is owned by the Bird Conservation Charity, which receives its proceeds. This charity funds conservation projects that benefit birds. You can see more entries from this year’s contest and previous years’ winners on the BPOTY website.

What do you think of users about the winning images of this competition? In your opinion, which work is the best-recorded idea?