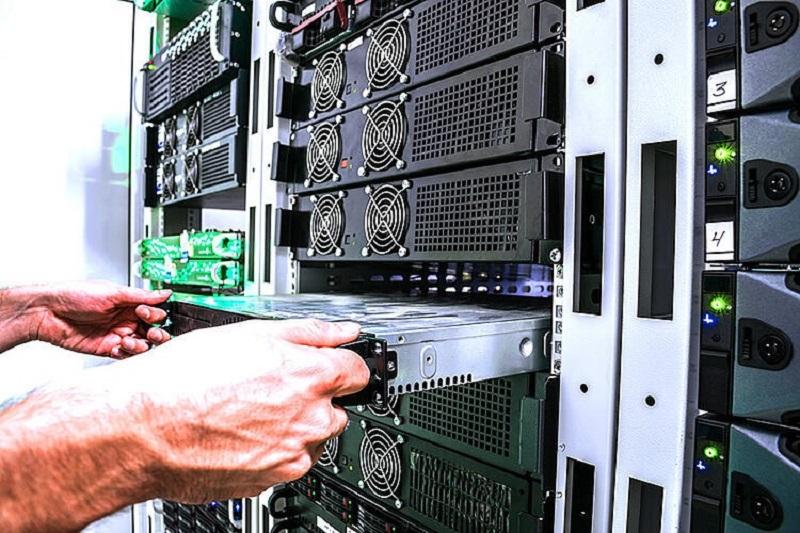 The Economic Conditions And Fluctuations In The Network Equipment Market Have Caused Companies Looking To Buy Servers To Face More Limited Options Than In Previous Years.

A report published by the Gartner Institute shows that IBM, HPE, and Dell are the three leading players in this field, who own more than half of the server market. At the same time, Cisco, Fujitsu, and Oracle are making it more difficult for other companies by producing and supplying unique and high-performance devices.

Next, other sellers are trying to capture the rest of the market. Among these companies, we should mention Lenovo, Huawei, Inspiron, etc.

Accordingly, this article will introduce the best servers in the market with high performance and quality. Servers that meet the needs of a wide range of businesses.

This upgrade includes the addition of DDR4 DIMM capacity, 8 PCIe 4.0 slots, 28 storage interface slots up to 960GB for M.2 boot options, and support for up to 5 GPUs. As you can see, this server provides the highest performance and can be at the heart of a client-server network architecture. It is good to know that PCI express technology’s fourth and latest generation is twice as fast as PCIe 3.0 and offers a data transfer speed of 16 GT/s.

This issue has made the above server suitable for performing various tasks, such as providing efficient and high-volume storage space, hosting applications with high input and output transactions, and high-performance computing. This is the server you need.

The PowerEdge R750   is an enterprise-class server designed for high-scale organizations. This server can support up to 24 NVMe drives and 8 PCIe 4.0 slots, thus providing the highest throughput. The above server can support two 3rd generation Intel Xeon processors that provide very high power. As for the main memory, this server does not lack anything and has 32 DIMM slots that can support eight TB of memory and supports different disks.

The PowerEdge R750 server is designed to handle heavy workloads of big data analytics, transaction-intensive databases, virtualization, and machine learning. This issue has made it known as a powerful all-purpose server. Dell company about the server“This server has been developed to accelerate the execution of applications and manage advanced workloads,” he said.

Fujitsu, in partnership with its long-time partner Sun Microsystems, continues to dominate the server market. It’s not wrong to know that the company unveiled the Solaris-compatible UltraSparc chip in September 2020. Fujitsu’s PRIMERGY series servers offer the latest generation of Intel Xeon processors.

Fujitsu PRIMERGY RX4770 M6 is a two-unit, four-socket server that supports 3rd generation Intel Xeon processors. Supporting 28 cores per socket and 12 DIMM memory slots for each CPU, this server can host up to 15 TB of memory. In addition, it allows organizations to choose the operating system they want and benefit from three years of support from this company.

A host of storage disks providing 16 available slots for up to 6 NVMe adapters and 8 PCIe 3.0 slots is one of the flagship features of this product for storage space. It is necessary to explain that Solaris is one of the efficient enterprise-class Linux operating systems for x86 architecture, which can use the system resources of enterprise-class servers in the best way. The RX4770 is the perfect choice for an organization’s scalable and upgradeable server.

The HPE Proliant DL380 is one of HPE’s older servers, but it is still popular with companies due to its unique design and high performance. A server whose sales statistics are still high. This server interests business due to its reliability, high performance, many features, and quick return on investment. The DL380 Gen10 server with new generation Intel processors, the ability to support higher capacity memory, NVMe ports, and implement robust networks easily meets the needs of large organizations. In addition, newer versions of this server have received significant improvements, including support for two scalable Intel Xeon processors that increase overall performance by 60% and core performance by 27%.

Huawei is one of the large and most profitable companies of recent years, which was founded in the late 80s. A company that has been able to progress in the past years. Today, Huawei has an established position in the server market. The FusionServer Pro 2288H V5 is a flexible, two-unit server capable of hosting two CPUs. As a result, there is no problem in managing workloads. More precisely, in big data processing, database input and output management, and cloud computing, the host of virtualization technologies and the implementation of client-server networks perform best.

In addition, in the description of this product, Huawei has announced that compared to similar models, it has a 15% reduction in energy consumption without the need to make changes in performance. The strength of the server above should be considered support for NVM express drives. Like the Cisco C240 ​​server, both servers support up to 28 NVMe drives. With 12 Optin Intel persistent memory modules, this server can support up to 7.5 TB of memory capacity, which is considered a high degree. In addition, it provides consumers with 10 PCIe 3.0 slots.

IBM is one of the old companies active in making servers, which is always famous for its innovation and exemplary genius in the field of information technology. The IBM Power System S922 differs from almost all the servers presented in this article, as it does not support any AMD or Intel x86 processors. On the other hand, it supports a dedicated IBM POWER9 processor, which increases the initial cost of purchasing a server. Still, it is justified for organizations looking for a flexible server with excellent cloud support.

This server provides the highest processing power and can support up to 4 TB of memory. This makes it a good choice for hosting cloud applications, big data analytics, and demanding workloads.

Hypervisor PowerVM is another valuable feature of this server. Regarding cloud optimization, PowerVM can consolidate and schedule workloads, which is vital in reducing costs and getting things done faster. The server includes 15 PCIe 4.0 slots and 2 U.2 module slots.

Inspur is one of the old companies based in China which focused on the construction of servers from the very beginning. Since the end of 2020, this company has significantly reduced its distance from Dell EMC and HPE in server production. However, one of the disadvantages of production servers of this company is occupying a significant space of the racks. For example, the Inspur NF8480 server occupies four rack units, which is interesting.

This server has four sockets for heavy computing, especially in artificial intelligence and deep learning. It has 50 slots for SAS, SATA, and NVMe drive.

The Inspur NF8480 is a fully expandable and flexible server for organizations that require Full-Height and Half-Height options for load balancing and managing heavy I/O operations. In addition, it offers 19 slots for PCIe 3.0 drives. Providing a wide range of high-end hardware capabilities makes it second only to Dell EMC’s E980 on this list. The addition of 24 Intel Optane Persistent 200 memory can support 7.5 TB of memory.

If you are looking for an advanced server with support for up to 7.5 TB of memory and 123 TB of storage capacity, the Lenovo ThinkSystem SR630 is the option you need. This server scored well in the performance tests of running single-threaded computing applications, making it attract large companies’ attention. The SR630 supports the latest Intel Xeon processors and has flexible input and output expansion options, 4 PCIe 4.0 slots, and 4 NVMe ports. The said server can work in harsh environments, and its energy consumption is low in proportion to the computing power it provides. In addition, giving the Lenovo XClarity controller allows network administrators to perform their tasks more efficiently.

Oracle Server X8 series are x86 servers developed to manage heavy workloads and applications requiring powerful hardware. Oracle Server X8-2 must be a server described as compact; it occupies only one unit of the rack server and supports up to 64 TB of memory and 51.2 TB of storage space. One of the significant advantages of Oracle X8-2 is the ability to work with a wide range of hardware and software packages produced by this company. More specifically, you can install the provided patches for the Specter and Meltdown vulnerabilities, whereas previous generations required microcode patches, which complicates matters. Additionally, unlike its Oracle Server X7-2 predecessor, which used first-generation Intel Xeon Scalable processors, the X8-2 is based on second-generation Xeon Scalable Platinum and Gold processors.

The PowerEdge R840 is the second four-socket server on this list and is a significant upgrade over the previous generation. Despite its small size, it includes up to four 2nd generation Intel Xeon processors and 24 NVMe drives and can support two GPUs to accelerate the execution of workloads. From a technical and capacity point of view, it ranks second among the servers introduced in this list, with a maximum capacity of 6 TB. It is necessary to explain that if DC permanent memory and LRDIMM are used, the total reaches more than 15 terabytes. This server is not the right choice if you are looking for a mid-level server. However, it’s OK for handling more complex workloads or hosting multiple virtual applications.

The HPE ProLiant DL325 Gen10 is a single-socket general-purpose server that sometimes outperforms dual-processor servers. It is necessary to explain that Gen10 has two times better performance than its previous generation. HPE ProLiant DL325 Gen10 is a good choice for organizations that expect a server to provide acceptable performance. DL325 is a 2nd generation AMD EYPC-based server that offers good security capabilities to suit enterprise needs. This server can support 64 GB RDIMM memory up to 2 TB memory. In addition, it is energy-efficient, has a Power-Packed power supply chassis, eight NVMe drives, two PCIe 3.0 slots, etc., so there is no problem with implementing an enterprise network.

It is the second flagship product of IBM on this list.

Power System E980 is a server equipped with four sockets and occupies four units of the rack server. The Power System E980 server is a suitable option for hosting large-scale applications, and due to its reliability, availability, and optimal service, it is ideal for deployment in enterprise networks. Using four POWER9 processors, the above server can manage up to 48 cores per socket and 64 TB of memory. It’s true that the above server only offers 16 slots for NVMe, but it tops the servers on this list by offering 32 slots for optimal connectivity between system components in the PCIe 4.0 section. In addition, the Power System E980 can best meet the needs of network clients by sharing the resources of the POWER9 processor.

It wouldn’t be right to list the best servers without mentioning SPARC M8. Oracle SPARC T8-1 is a single-socket server that occupies only one server rack unit despite providing a wide range of efficient hardware capabilities. Still, it’s an excellent all-purpose machine capable of running heavy software, high-transaction databases, and Java applications twice as fast as competing systems. More precisely, we should say that the SPARC T8-1 is developed for heavy enterprise workloads. This server is equipped with 16 DIMMs and can host up to 6.4 TB of memory.

This server, with only eight removable drives (only 4 of which can be NVMe) and 6 PCIe 3.0 ports, can store up to 25.6TB of data. This server is suitable for organizations using Oracle software and T8-1 to integrate workloads. In addition, third-party software such as Oracle VM has been added to this server to facilitate virtualization.