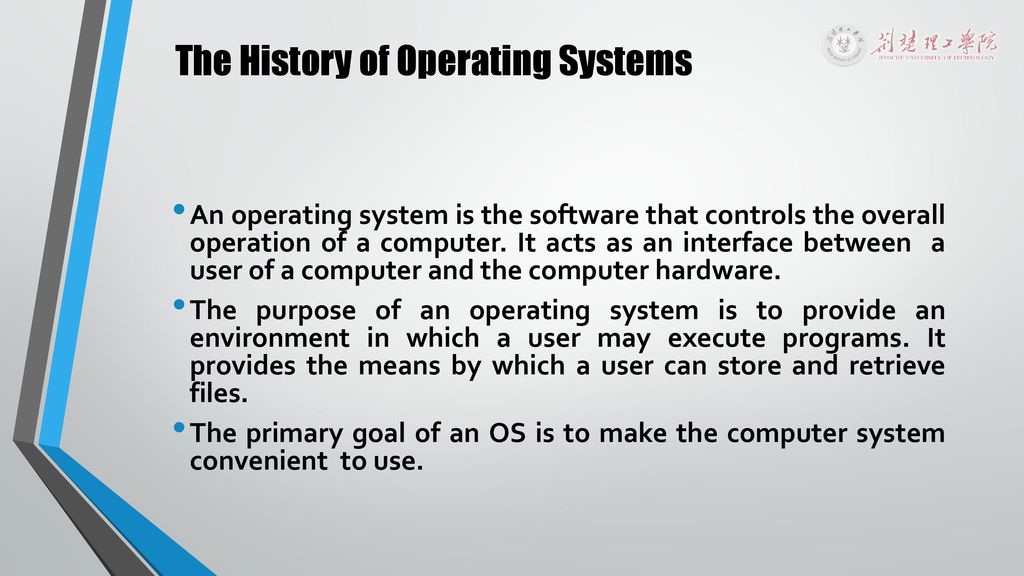 Operating systems provide a set of functions and links needed to control and synchronize computer hardware; Most applications in the computer use these functions. Knowing the evolution stages of operating systems and their history has useful and interesting information for you.

The first Z1 electronic digital computers were built in 1938-1936; They had no operating system;

Any program run on these first computers had to include all the codes needed to run on the computer while communicating with the hardware. Also, computers were generally used to solve simple mathematical calculations, and all programming was in the language. The absolute machine was often wired with plug-ins to control the basic functions of the machine; This situation made even the simplest programs very complicated.

In response to this problem, due to the evolution and complexity of hardware, the owners of central computers began to develop system software that facilitated the writing and execution of programs on the computer. Thus the first operating systems were born.

The first operating system introduced in the early 1950s (in 1956) was called GMOs and was developed by Robert L. Patrick of General Motors and was created for the IBM 701 machine. In the 1960s, IBM became the first computer manufacturer to take over the task of developing operating systems and began distributing the operating systems included in its computers.

Operating systems in the 1950s were called single-stream batch processing systems because data was sent in batches. These new machines were called mainframes and were used by professional operators in large computer rooms, as these machines were expensive. , only government organizations or large companies were able to buy them.

The birth of this operating system happened when computers could only run one program at a time; in the following decades, computers began to include more and more software programs that came together to create today’s operating systems.

The systems of the 1960s were also batch processing systems, but they could take advantage of computer resources by running multiple tasks simultaneously; Therefore, operating system designers developed the concept of multiprogramming, in which multiple tasks were performed simultaneously in main memory. The introduction of multiprogramming was a major part of the development of operating systems, as it allowed the CPU to use the CPU almost 100% of the time. would do; be busy

In the late 1960s, Bell Labs began to use the Unix source. The first version of the multitasking, multiuser Unix operating system was developed by AT&T Bell Labs programmers Ken Thompson, Dennis Ritchie, Douglas McIlroy, and Joe Ossanna, and in the 1970s, first in It was widely accepted and made available by AT&T and later by colleges and universities, written in the C programming language, and freely available in its early years.

Unlike a generic operating system where if someone wanted to change a set of functions on a CPU, they had to format all the operating system functions and start over, this was a huge leap forward; Unix was easily adapted to new systems and quickly gained widespread adoption. Many modern operating systems, including Linux, Mac OS X, Android, iOS, Chrome OS, and all the different versions of Linux, are older and older.

The first version was available in the 70s, Unlike a generic operating system like the one used in GM, where if someone wants to change a set of functions in a CPU, they have to reformat all the operating system functions and start changing them all over again.

Microsoft Windows developed an operating system during this period in response to IBM’s request to run a wide range of personal computers; It was also the main operating system in ROM (read-only memory) alongside Integrated Basic, which was initially cassette-based when the disk was implemented in 1978, Shepardson Microsystems launched the first disk operating system (DOS).

Another important feature in the third-generation operating system was a technique called spooling (simultaneous peripheral operation on the line) another important development during the third generation was the phenomenal growth of small computers, with the DEC PDP-1 in the year Launched in 1961 and sold like hotcakes, in 1977 the Apple II series was born; It is a family of home computers, the first highly successful microcomputer designed by Steve Wozniak, it was an 8-bit computer with the first color graphics.

Microcomputers helped to create a whole new industry and the development of more PDPs; these PDPs led to the creation of personal computers built in the fourth generation.

The first operating system created by Microsoft was not called Windows; it was called MS-DOS and was created in 1981 when Microsoft purchased the 86-DOS operating system from Seattle Computer Products and modified it to meet IBM’s requirements.

One of the important factors in creating personal computing was the birth of Microsoft and the Windows operating system; The Windows operating system was created in 1975 when Paul Allen and Bill Gates had the vision to take personal computing to the next level, they introduced MS-DOS in 1981, launched by Microsoft and based on 86-DOS. It started with a company called (Seattle Computer Products) created by Tim Patterson.

Apple is another major operating system that was created in the 1980s; Apple co-founder Steve Jobs created the Apple Macintosh, which was a huge success because it was user-friendly. The development of Windows in the following years was influenced by Macintosh, creating fierce competition between the two companies.

NeXTSTEP is a multitasking, an object-oriented operating system developed by NeXT Computer, originally used in the late 1980s and early 1990s for its trademark NeXTcube workstation computer; NeXT Computer was the platform that Electronic AppWrapper created the first commercial electronic software distribution catalog that collectively manages encryption and provides digital rights for software applications and digital media.

AppWrapper gave rise to what we know today as the app store; After Apple acquired NeXT, it created systems such as macOS, iOS, and WatchOS: In addition, many of Apple’s features and applications came directly from NeXT.

In December 1987, OS/2 was released; OS/2 is a series of computer operating systems originally developed by Microsoft and IBM after the two companies failed, after mispositioning OS/2 and Microsoft 3.1. In 1992, both companies severed ties, OS/2 was originally intended as a PC-Dos preserver; On May 22, 1990, Microsoft launched Windows 3.0, the third major graphical environment.

Windows 3.0 became a competitor to the Apple Macintosh and Commodore Amiga in the GUI (Graphical User Interface) department; on September 17, 1991, Linux released its kernel operating system; which is based on Unix operating system like open source; Note: Linux is a free operating system known for distributions such as Ubuntu and commercial applications such as Redhat Enterprise Linux.

On August 24, 1995, Windows 95 was released by Microsoft as the first operating system in the 9x family (versions released after 1995 and up to 2000); The major change was the 32-bit operating environment and its plug-and-play features.

On June 25, 1998, Microsoft launched Windows 98, which featured a mixed 16-bit and 32-bit graphical interface, making it a visual operating system. -DOS runs; this Windows operating system is part of the 9x family.

Released on September 23, 2008, Android is a mobile operating system developed by Google; Based on the Linux kernel and other open-source software, it is primarily designed for touchscreen devices, although other versions of the operating system exist; Android is the first major competitor of IOS.

On October 22, 2009, Microsoft Windows 7 was developed to replace Vista, “Win7” is currently used by more than 50% of Internet users.

Windows 7 was intended to be an update to its predecessor, Windows Vista, and addressed Vista’s poor critical reception while maintaining hardware and software compatibility;

New features such as Libraries, HomeGroup – file sharing system, support for multi-touch input, and Action Center interface for an overview of system maintenance and security information were added to the operating system and revisions were made to User Account Control to make it less intrusive.

In May 2011, Google launched Chrome OS, an operating system based on the Linux kernel, it is free software that uses the Google Chrome web browser as the main user interface (UI) and applications supports under the web; Its user data runs directly from the cloud, making it the first cloud-based operating system.

In 2012, Windows 8: “Win8”, developed by Microsoft to replace Win7, was recently released on October 26, 2012, at the same time as its Surface product, Windows 10 was finally introduced in 2014; It should be noted that if you are looking for an always-on and powerful server with Windows operating system;