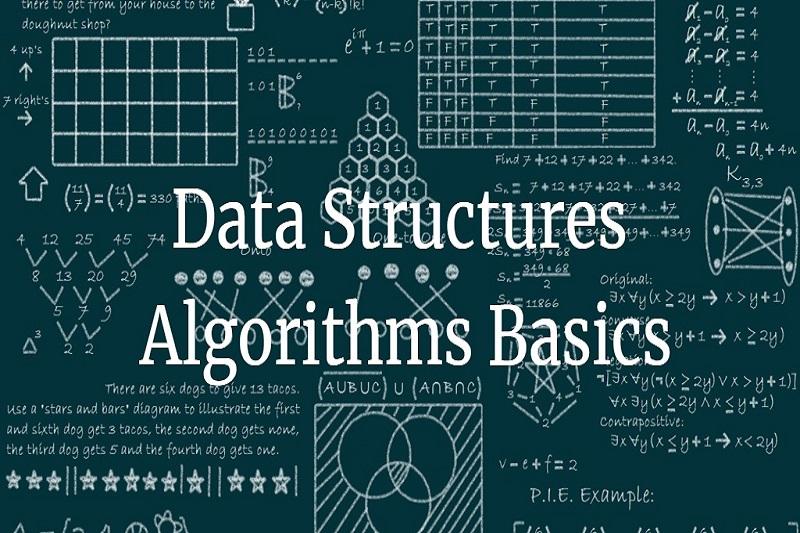 One Of The Most Important And Practical Topics In The World Of Programming Is Data Structures. It Does Not Matter What Programming Language You Want To Learn; as long as you don’t have enough knowledge of data structure, you will not succeed in your work because the foundation of all extensive programs is a data structure.

Unfortunately, most programming schools do not teach these concepts; only computer students can learn them well. Universities are a few steps ahead of private schools regarding data structure education.

Data structures are used by various professionals such as data scientists, data engineers, machine learning programmers, application programmers, and slow programmers. In this article, we will review the essential concepts of data structure.

What is data structure?

It is better to start with a simple definition. Data Structure refers to a place that holds data based on a specific format. There is a subtle point here; You must use the correct application template to get the best results. Data structure provides programmers with a solution for organized data storage. All programmers and professionals whose jobs are related to data are related to data in different ways.

For example, when you want to calculate the salaries of an organization’s employees, sales list and inventory of goods, telephone numbers, addresses, and general data-related activities, in all these cases, the data must store in a specific format.

What is an algorithm?

One of the critical concepts that are closely related to the data structure is an algorithm. An algorithm is a clear, precise, unambiguous, and executable set of commands written to perform a task. Algorithms are written to solve a problem based on a series of studies.

An important point to note about algorithms is that algorithms generally do not contain any programming instructions and only describe the steps on which a program or module is written. For this reason, they are not limited to one particular language. You can register an algorithm that can convert executable code into different languages.

Here, without mentioning any programming commands, the algorithmic steps for this problem are as follows:

As you can see, the philosophy of writing algorithms is to describe what a programmer has to do, so they are not dependent on a programming language and can be implemented in any language.

What are data structures most important in the world of programming?

When you start learning a programming language, you are faced with different data structures, each with a specific application and another way of executing them.

Novice programmers ask which data structures are more important or more suitable for data storage. The answer to this question depends on the type of project and the data you have. The most common data structures are Array, Stack, Queue, Linked List, Tree, Graph, Trie, and Hash Table. ) Cited.

An array is the first, and simplest data structure in all programming languages ​​used more than any other instance. Commonly used data structures, such as stacks and displays, are branching arrays. Collections can have different sizes and dimensions. Each data element is identified by a numeric value starting at zero.

This value is called the index (index), which indicates the position of an element in the array. In most programming languages, the array index starts with a value of 0. For example, in Figure 1, you see a display with four members.

Primary operations that can perform on arrays

In general, the following operations are performed on arrays.

When submitting a resume for a programmer job posting, HR experts ask questions about arrays in the interview session.

Frequently asked questions about arrays in job interviews are as follows:

One of the most used buttons we all press several times a day in applications is the Undo button, but only a few people have accurate information about the function of this button. The main idea behind Undo is that it stores the previous status of what the user did.

Of course, there is a limit to the number of states that can store, as this process takes place entirely in the main memory, and no program tries to occupy a large portion of memory for this purpose. This data is stored so that the last stored information is displayed first.

Arrays cannot do this, so a stack concept was invented. To better understand the performance of the pile, it is better to give a real example. Suppose you have a stack of books stacked on top of each other.

To remove the book in the middle, you must first remove all the books on the text to reach your book; This process in the programming world is called “Last In First Out” (LIFO). In Figure 2, you see a stack consisting of three values, ​​1, 2, and 3, with value three at the top, and as a result, the other elements are removed first. 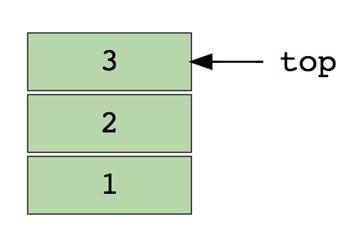 The main operation can perform on the stack

As mentioned, stacks are of interest to programmers because of their ability to maintain previous activities. Therefore, you should spend enough time learning the concepts related to piles. In general, the following operations can perform on stacks:

Like arrays, programmers are asked questions about stacks, the most important of which are:

The queue is another critical data structure that stores elements sequentially and is therefore classified as a linear data structure subset. The main difference between a stack and a queue is that in the queue, instead of using the “Last Input First Output” method, the “First In First Out” (FIFO) approach is applied. The most obvious example of this concept is the shopping queue of a store.

If a new person is added, they will go to the bottom of the queue, and the person standing at the beginning of the string will be the first to receive a ticket and leave the column. In Figure 3, you see a row of 4 elements with the value one at the top of the row and the first element to be deleted. 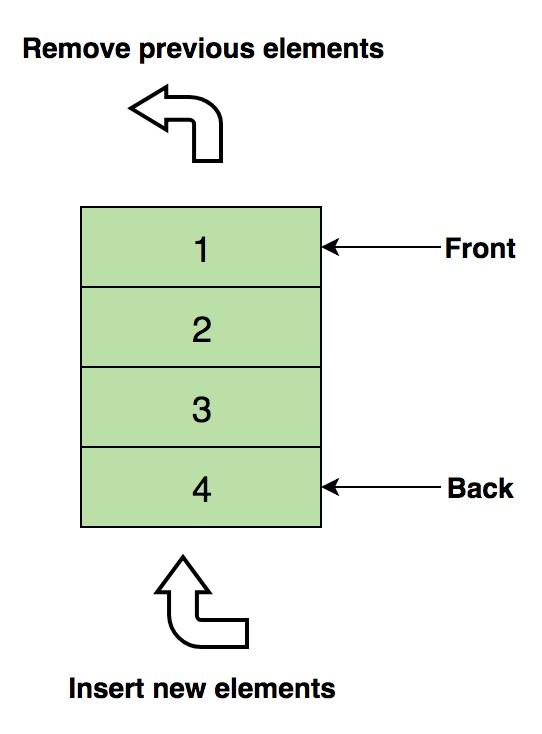 Primary operations applicable to the queue

There are also questions about queuing, the most important of which are the following:

The link list is one of the most critical data structures and is essential if you decide to learn languages ​​like C++; you need to know what is about what. Link lists are very similar in appearance to arrays. Still, they differ significantly from collections in topics such as memory allocation, the internal structure on which they are built, and basic operations such as adding and deleting.

A linked list forms a chain of nodes, each of which holds two types of information. The first type is accurate information like values, and the second type is a pointer that points to the next node in the chain. In linked lists, there is a head pointer called the head, which refers to the first element of the linked list.

Link lists implement filesystems, hash tables, and neighborhood lists. In Figure 4, you see the structure of a linked list. If the list is empty, the vertex node points to Null.

As we mentioned, linked lists are one of the most critical concepts in a data structure in languages ​​like C++ and are essential to learning. If you enter the world of C++ s programming, you will no doubt be working with different types of linked lists. First, define an algorithm to implement them and then code; Otherwise, you will have trouble implementing them. Link lists are divided into classes: one-way lists, two-way lists, and circular lists.

The most important questions to ask about link lists are:

A graph is a network of interconnected nodes consisting of a pair (x, y) called edges that connect the vertex x with the vertex y. Typically, an advantage has a weight or cost that indicates how much it costs to go from vertex x to y. It is essential to calculate this cost in areas such as the network where the packets are to arrive at the destination in the shortest time. Figure 5 shows some examples of graphs. 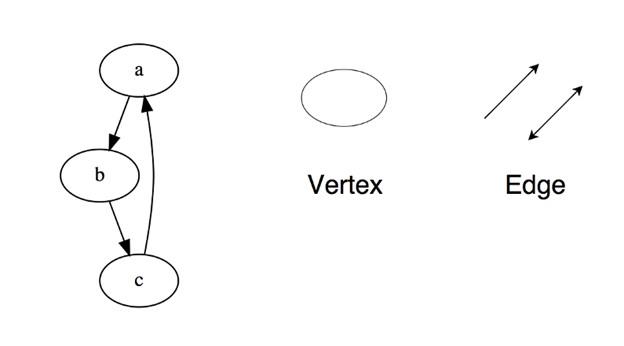 Essential questions about graphs include the following:

The tree is one of the most helpful data structures with many uses. A tree is a hierarchy of vertices (nodes) and edges connected. The Trees have a function similar to graphs, but they are not the same. For example, popular games such as chess are implemented based on trees, and interestingly, it is more important to estimate the complexity of the tree than to implement it.

Trees have no circle or circle, while graphs can have a process. Trees are primarily used in topics related to intelligent algorithms and projects that have a complex structure. In Figure 6, you see a simple tree.

Trees are similar to other data structures. They are divided into different types, the most important of which are balanced or balanced tree, binary tree, binary search tree, balanced height tree, redwood tree, and 2-3 tree. However, binary and search trees are widely used today in software development.

Possible questions related to trees include the following:

Prefix trees are classified as a subset of trees, but because of their widespread use, we refer to them separately. Usually, people who want to enter the undergraduate or graduate computer science field must be familiar with the function of this tree to pass the national exam. To better perform the tasks, programmers must be thoroughly familiar with implementing this tree model.

The Trie, called the prefix tree, has a tree-like structure, but its primary use is to solve string problems. Prefix trees are used for fast data retrieval and primarily in applications such as searching words in dictionaries, auto-suggesting in search engines, and routing IP addresses.

Figure 7 shows how to implement and store data elements in a prefix tree. The point to note about the prefix tree is that the word storage process in this tree has a top-down approach, Exactly as you can see in Figure 7. 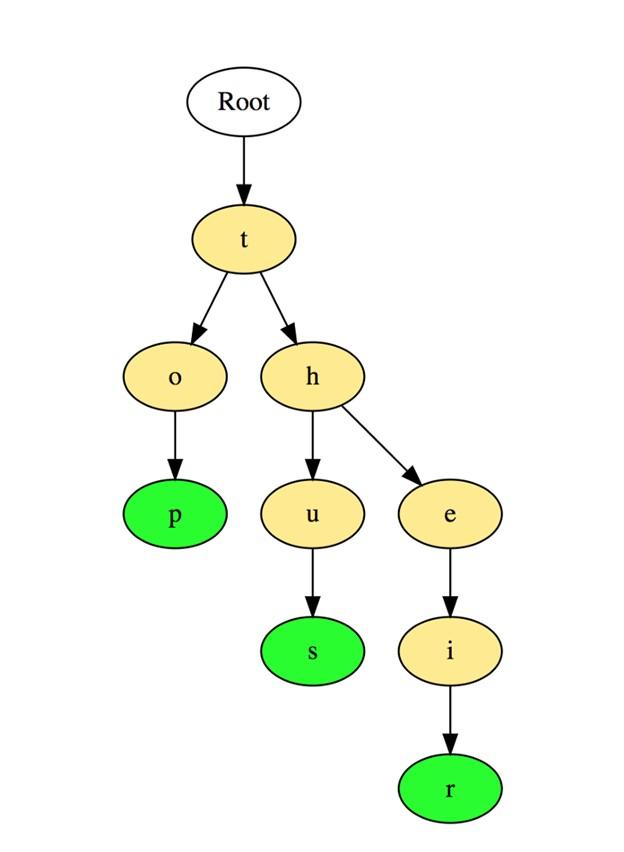 Essential questions about prefix trees include:

One thing to remember as a software programmer or student is that the concepts of data structure and advanced algorithms are not limited to undergraduate or graduate courses in computer engineering and play an essential and critical role in software development. AI and machine learning engineers have to use the proper data structure in projects to do business to maintain program performance and get output.