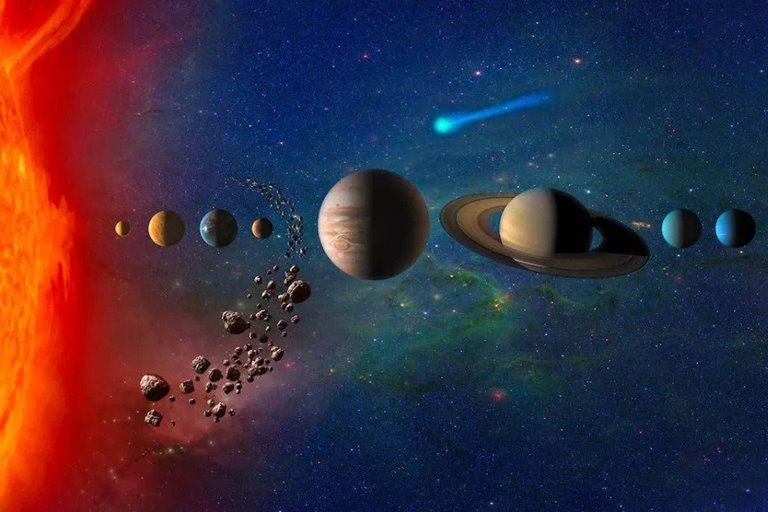 The Inner Solar System Rotates At A Much Slower Rate Than Predicted By Modern Physics, And New Research Answers The Cause Of This Phenomenon.

A thin disk of gas and dust is known as an accretion disk that revolves around young stars. These disks, from which the planets form, contain the remnant material of the star, which constitutes only a fraction of the star’s mass.

According to the law of conservation of angular momentum, the inner part of this disk should be rotating faster because the material is being pulled toward the star at a slower rate. This process is similar to the movement of ice skaters who rotate faster by bringing their arms closer to their bodies.

However, previous observations have shown that the inner Solar System, or the part of the Solar System that extends from the Sun to the asteroid belt and includes the rocky planets, does not rotate at high speeds according to the law of conservation of angular momentum.

Caltech researchers wrote in a statement:

According to Paul Blanc, professor of applied physics at Caltech and one of the authors of the research:

People always want to blame chaos for phenomena they don’t understand, But according to the evidence, turbulence can cause decreasing angular momentum in accretion tablets.

Blanc investigated the path of independent atoms, ions, and gas in the accretion disk and how the particles behave during and after the collision to understand the loss of angular momentum better. While charged particles such as electrons and ions are affected by gravity and magnetic fields, neutral atoms are only affected by gravity.

The researchers used computer models to simulate an accretion disk in which 1,000 charged particles collide with 40,000 neutral particles in gravitational and magnetic fields.

They concluded that interactions between neutral atoms and a smaller number of charged particles produce positively charged ions or cations that spin inward and negatively charged particles or electrons that revolve outward from the edge of the accretion disk. At the same time, the neutral particles also lose their angular momentum and rotate towards the center.

Thus, the accretion disk acts like a giant battery with the positive terminal near the center and the negative terminal at the edge of the disk. These terminals produce powerful streams or jets of matter launched into space from both sides of the disk. According to Blanc:

The model is detailed enough to cover all the necessary features because it is large enough to simulate the collision of trillions of neutral particles, electrons, and ions around the star in the magnetic field.

Since electrons are negative and cations are positive, the inward motion of ions and the outward motion of electrons caused by collisions increase the standard angular momentum of both. Neutral particles also lose their angular momentum due to clashes with charged particles and moving inward. This process balances the increase in the standard angular velocity of the charged particle.