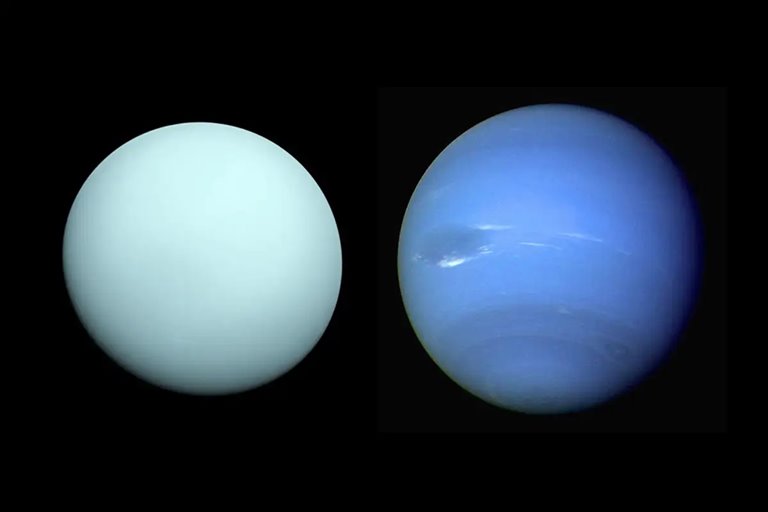 Uranus And Neptune, The Two Planets In Our Solar System, Are Similar But Different Colors In Many Ways. Scientists Have Just Discovered This Color Difference.

Astronomers may now understand why planets similar to Uranus and Neptune are seen in different colors. Using the North Jamna Telescope, NASA’s Infrared Telescope, and the Hubble Space Telescope, they could build an atmospheric model of the two planets’ atmospheres that matched their surface observations. This model shows that the extra atmospheric dust in Uranus’ still, the turbulent atmosphere makes it appear lighter in color than Neptune.

Neptune and Uranus are similar in many ways. The two planets have identical mass, size, and atmospheric composition; However, their appearance looks different to us. Neptune appears bluer than Uranus at visible wavelengths, while Uranus is slightly green or blue. Astronomers may now have an explanation for the difference in the color of these planets.

NASA’s Voyager 2 spacecraft captured images of Uranus (left) and Neptune (right) during its voyage in the 1980s.

This conclusion comes from using an atmospheric model developed by an international research team led by Patrick Irwin, a professor of planetary physics at Oxford University, to describe the aerosol layers in the atmospheres of the planets Uranus and Neptune. Previous research to study the upper parts of the two planets’ atmospheres has focused more on the appearance of their atmospheres and only at specific wavelengths.

But the new model, consisting of different atmospheric multilayers, is consistent with observations made of two planets over a wide range of wavelengths. In this model, the presence of dust particles in the deeper layers of the atmosphere is also predicted. In the past, these layers were thought to contain only methane clouds and hydrogen sulfide ice. Irwin explains:

It is the first model consistent with our observations of the reflection of sunlight in the ultraviolet to the near-infrared. It is also the first model to explain the difference in the visible color of the planets Uranus and Neptune.

Patrick Irwin is the lead author of a recent research paper published in Geophysical Research.

The atmospheric model proposed by scientists from three aerosol layers(Suspension of solid particles or liquid droplets in gas) is formed at different heights. The leading layer that causes the color difference between Neptune and Uranus is the middle layer, and in the research report, it is referred to as the aerosol layer 2. This layer is thicker on the planet Uranus than on Neptune.

Researchers believe that on both planets, methane ice (methane hydrate) condenses on the second layer particles, causing them to fall into the deeper parts of the atmosphere in the form of methane snow.

Neptune has a more vibrant and turbulent atmosphere than Uranus; Therefore, researchers believe that Neptune’s atmosphere has a more remarkable ability to move methane particles in the dust layer and produce methane snow.

It causes the methane dust in Neptune’s atmosphere to disappear, reducing the thickness of the atmospheric dust layer, ultimately making Neptune’s blue appear brighter than Uranus. 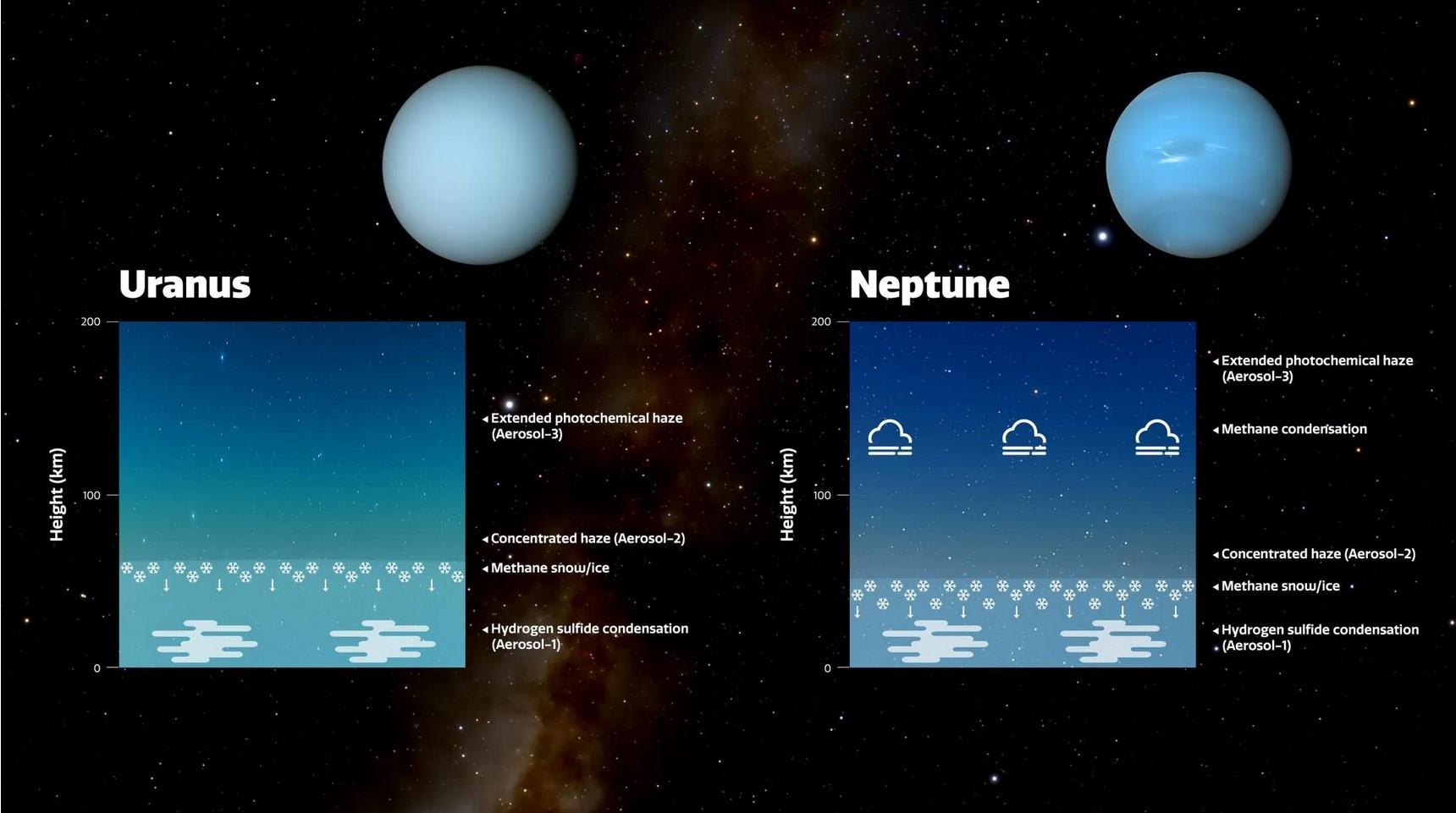 It is A diagram showing three layers of particles in the atmosphere in Uranus and Neptune.

” Mike Wang, an astronomer at the University of California, Berkeley and a member of the research team, says:

We hope that building this model will help better understand clouds and dust in icy giant atmospheres. Explaining the color difference between Uranus and Neptune was an unexpected reward.

The Irwin research team analyzed several planetary data at ultraviolet, visible, and near-infrared wavelengths (from 0.3 to 2.5 micrometers) to build their model. The data are from the Near-Infrared Integral Field (NIFS) spectrometer of the North Jamna Telescope near Mount Maunakia on the island of Hawaii, which is part of the Jamna International Observatory, as well as the NASA Infrared Telescope Facility Information Archive located at The Hubble Space Telescope was developed by NASA and the European Space Agency.

Neptune has a more vibrant and turbulent atmosphere than Uranus.

The NIFS spectrometer at the North Jumana Telescope has been perhaps the essential tool for scientists to develop the atmospheric model, as it can measure the brightness of a mass in its field of view at different wavelengths. In this way, the researchers could measure the reflectance of the atmospheres of the two planets Neptune and Uranus at near-infrared wavelengths and their entire disk. Says Martin Steele, director of the Jamna program at the National Science Foundation:

Jamna Observatories continue to add to our knowledge of neighboring planets. In this study, the North Jamna Observatory provided an essential portion of the total data collected from space and ground installations to detect and identify atmospheric dust.

This model can also explain the occasional appearance of dark spots on the surface of Neptune, Spots that are less common on the planet Uranus. While astronomers were aware of these dark spots in the atmosphere of both planets, they did not know which of the aerosol layers caused them and why the aerosols in those layers were less reflective. The researchers’ findings show that the darkening of the deepest layer of their model causes dark spots similar to those of Neptune and possibly Uranus.