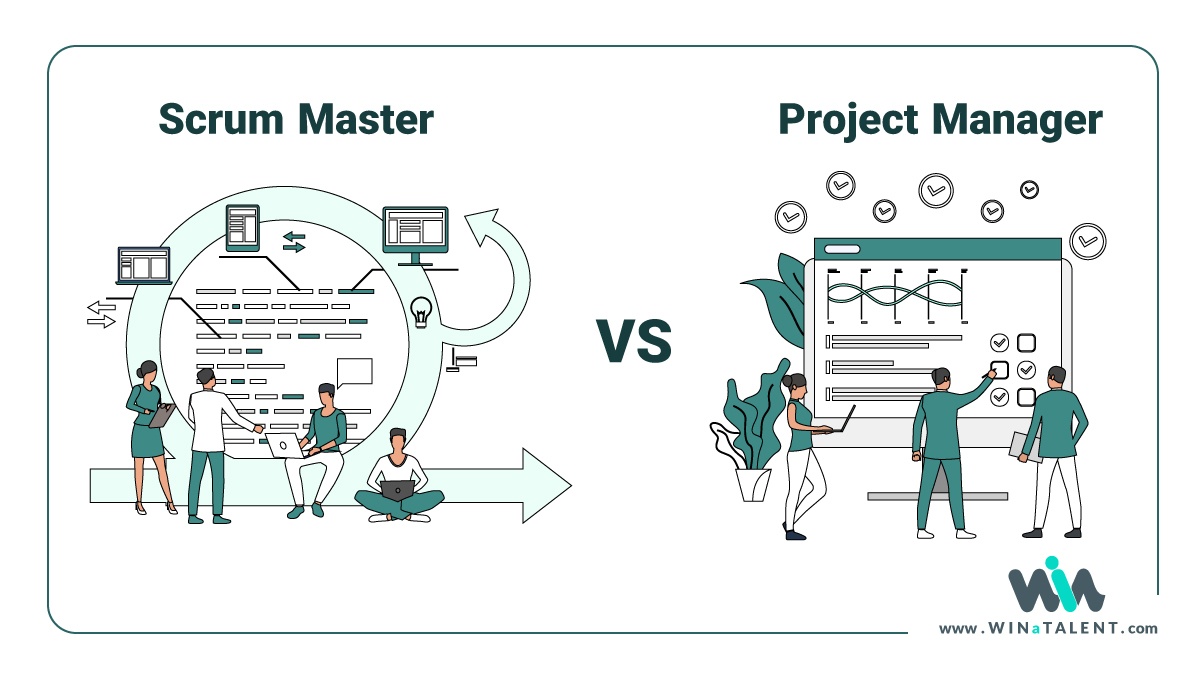 This character is usually played by one person and is the lead for Scrum in a project. The role might give rise to doubt that Scrum Master is the director or project manager.

Scrum Master is the leader of Scrum and always tries to get Scrum to run properly by the team. He also tries to avoid the growth of challenges and, in case of a problem, support the team to address it.

Scrum Master has a general duty

Maintain high productivity in development and guidance. Each of these smaller tasks is broken up. We will explain these minor tasks further.

In Scrum, most group communication, which often leads to decision-making, comes at meetings. Scrum’s meetings are rigidly defined and regulated. In traditional organizations, the administrative rules and managers control and manage the meetings. But Scrum does not have level-to-level management, and the entire team will be responsible for controlling the sessions.

Despite the many benefits Scrum meetings will have for development, it is sometimes when the team refuses to hold meetings or when members do resort to excuses not to attend meetings. This inefficiency can have an irreparable impact on development.

Remember, we always face the countdown of time in software development, and minor mistakes may cost the development and development team very expensive.

As noted, members of the Scrum team are responsible for controlling the sessions, but this is usually Scrum Master, who uses his powers to force the team to hold meetings. He should ensure that the meetings are regular and accurate. Other Scrum Master tasks include scheduling, planning, and running meetings.

Teamwork also has marginal privileges despite its many benefits. These anomalies naturally exist in self-organizing groups. No matter how band members get together and adjust, the friction between them is inevitable. In traditional groups, usually manage conflicts resolution. In self-organizing Scrum groups, it is Scrum Master’s job to improve social relationships between people.

To solve problems as a leader, he must also resolve them by paving the social environment so that no disagreements can happen. It is important that the person carrying this role is considered to be highly flexible in terms of social skills, as the leader is the one moving ahead of a group, and walking in their way, allowing others to walk.

“It can be said that the sprint planning session is one of the most difficult and sensitive operations the group is carrying out during its development. Error in this meeting may cost the entire project time. Any sprint determining operation, item estimates, or closure of a sprint will require skill and experience. Sometimes, because of the team’s lack of experience in Scrum or the pressure of working, the team will not perform well in the above operations.

For larger teams, Scrum is better into several groups (e.g.10 players) and Scrum is in each group separately. The representative of the groups, in general, form a large group at a macro level, which directly undertakes the task of development, and their aspect is often linked to strategic decisions.

The work of the macro-level group is to review each part and plan for them. While in Scrum the project manager is not defined, in macro-mode a person is usually defined as the senior who can be named project manager. The person is either selected from Scrum Masters or is assigned in an external way.

For larger teams, Scrum is better divided into several groups (e.g. 10 players) and Scrum is used in each group separately. The representative of the groups, in general, form a large group at a macro level, which directly undertakes the task of development, and their aspect is often linked to strategic decisions.

The work of the macro-level group is to review each part and plan for them. While in Scrum the project manager is not defined, in macro-mode a person is usually defined as the senior who can be named project manager. The person is either selected from Scrum Masters or is assigned externally.

The meetings are essential parts of Scrum. Meetings are vital. Therefore, they must be properly planned. A meeting in Scrum can be useful to apply a performance attribute. An effective session is a meeting that satisfies preset objectives at the specified time.

For example, in a sprint daily session, if all members of the board present their report in a total of 15 minutes and the meeting lasts no longer than this, the meeting can be considered an effective one. Meetings are useful if they are effective. “Meetings that are not working won’t be beneficial, they waste time for development as well. The presence of Mr. Scrum Master in all meetings is required. She added that she is also a good participant in the program because she must oversee the implementation of meetings and keep their effectiveness high.

The Scrum Master must first choose a suitable time for each session. The time should not be long enough to dull one’s members, nor should it be too narrow to serve the congregation’s goals. Scrum Master Dogs recognizes that the meeting will last longer than usual, can split the meeting into several sessions with more appropriate times.

The minimum number for a typical team is usually 8. This number must not exceed 12. Because Scrum teams are self-organizing teams, a large number of people will create chaos. “Integration often loses in the busy group and the team members can’t unite well. “It also involves a large number of employees, increasing the duration of meetings and reducing their effectiveness.

In such teams, there are often divisions among members, whereas solidarity is considered an important pillar for the success of any team. Interference of tasks is another disadvantage of the team’s build-up because for a role in developing many people sometimes interfere with their tasks. In general, Scrum Master should keep the number of people as good and exercise caution to change it.

9. Get people to interact with jobs

In the development team, everyone does something. One’s more willing towards some jobs and does not dislike some jobs. Because each person has multiple skills in developing in various areas. A person’s reluctance to work makes him unable to focus well on his work and consequently have low productivity. In addition, it is likely to produce something of low quality eventually.

Scrum Master Following his tasks to increase productivity in development should ensure that people are on the right posts. Sometimes in small teams, this rarely happens due to a lack of manpower. In this case, it is necessary to ensure that these individuals do their duties according to their wishes in a way that is happy with them and can do it properly and in harmony with development.

10. Ensures that every developer is working on the item

Because Scrum teams are self-organizing, they often choose what they do and do not take direct orders from anyone else. The coordination teams usually do not face conflicts in this way. But in some teams, particularly with newcomers, it is possible that some individuals get in the selection of work and cannot do anything, or that someone inadvertently performs an activity that is not of commercial value and is fake.

The Scrum Master task is to quickly recognize these conditions. The fast detection is because Scrum teams are small. The effective absence of one member will be strongly felt, which is associated with the dissatisfaction of other members and the loss of development time. After identifying such a position, Scrum Master should employ a passive person’s skill to suggest an effective work, and make sure that his actions are worthy. If there is a good job for the individual, he or she can assist other members in developing techniques such as pair programming.

11. Prevent and remove obstacles when occurring

“Obstacles are any problem that has not many solutions for it. The slow development or termination in the worst case. All developers have nightmare difficulties. Dealing with them can cost the entire sprinkler time. Lack of access to technology without software or hardware and even losing one of my members of development can be examples of a barrier.

No matter how skilled or experienced a team member may be, they will never accomplish anything without the proper facilities. For a team to be efficient and deliver quality work, facilities must be provided and available to the team. These facilities can be of any type, including hardware, software, and administrative environment. These are not Scrum Master’s duties to provide, but he must check them regularly to ensure their accuracy.

As you have seen, the role of Scrum Master is very difficult and demanding. However, he is not always doing such duties. Scrum Master is essentially a developer, which, along with development, leads Scrum. So it’s exactly as any developer has skills. Being a developer with Scrum Master’s tasks requires a lot of time and work. Therefore, Scrum Masters are usually less developed than other developers.