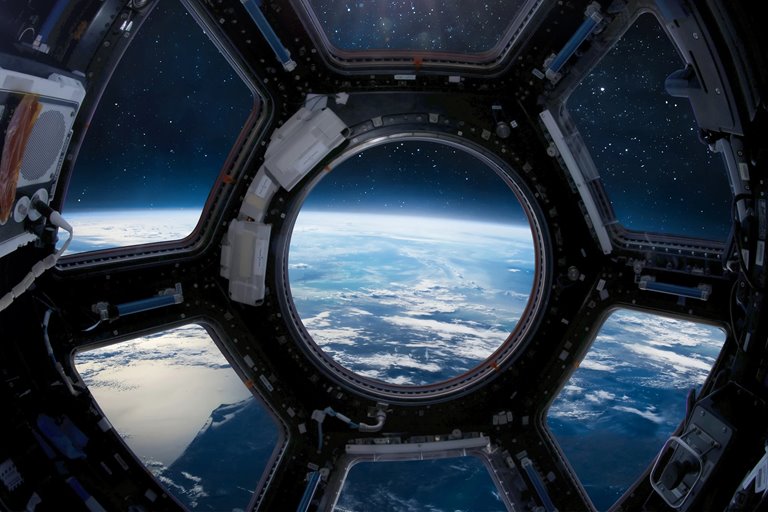 Can Astronauts See The Great Wall Of China Or The Egyptian Pyramids From Space? In This Case, There Are Usually Contradictory Rumors And Guesses. But What Is The Reality?

You have probably heard from someone or read somewhere that the Great Wall of China is so big and distinctive that you can even see it from space. The question is, is such a thing true? Is it possible to see artificial structures outside the Earth’s atmosphere, as suggested by some?

To answer this question, first, we need to define space as a boundary for ending the Earth’s atmosphere. The Karmann line, named after the physicist of the same name, is generally known as the boundary between the Earth’s atmosphere and space. Generally, the working line is defined at an altitude of 100 km compared to the surface of the open seas.

The above definition and the presentation of our line of work by itself raise several other basic questions. Questions about what can be seen after this height of approximately one hundred kilometers?

Would someone in our line of work be able to see, for example, the Great Wall of China or the Great Pyramids of Giza on a sunny day?

Some artificial structures can recognize from such a height. However, it seems unlikely that the name of these structures will immediately come to mind. 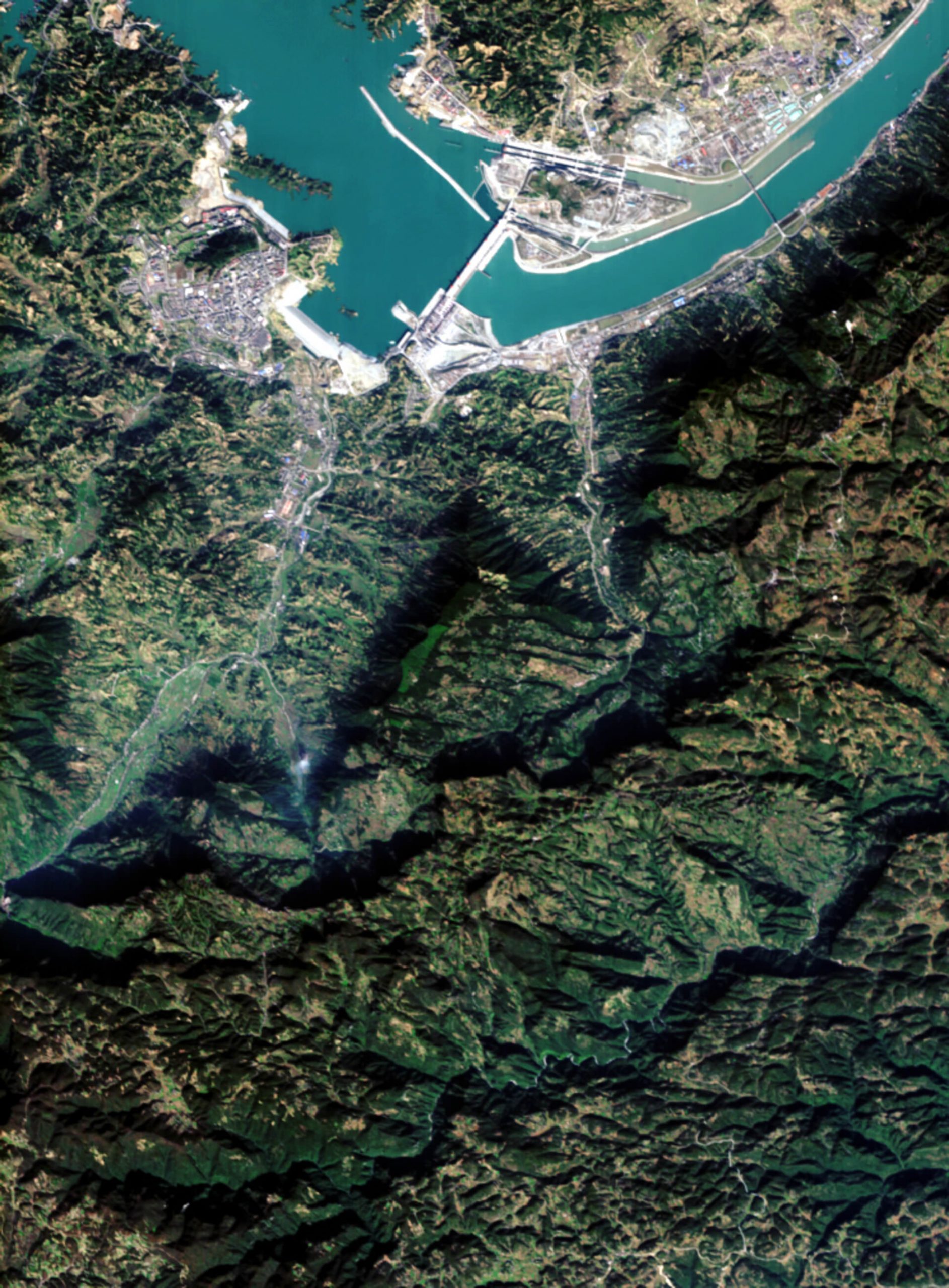 The image of the Three Gorges Dam in China was recorded by the Proba satellite in 2004.

Bingham Canyon Mine is 32 km southeast of Salt Lake City in the state of Utah in the United States. According to the statistics of the Space Research Association of Universities, this mine is an enormous artificial pit and the deepest open-pit mine in the world.

This large mine, with a depth of nearly one kilometer and a width of four kilometers, is not only easily seen from the line of work without the need for any magnification tools, but according to some reports, NASA space shuttle astronauts could easily see this problem while traveling in orbits with an altitude of 305 to 531 kilometers. Recognize artificial large.

According to NASA’s description, the Three Gorges Dam built on the Yangtze River in China can be seen from space. According to France 24 news agency, this dam is the largest power generation facility (among all types of power plants) and probably the most expensive hydroelectric dam built in the world. Sahara dam is 185 meters high, and its length reaches two kilometers. 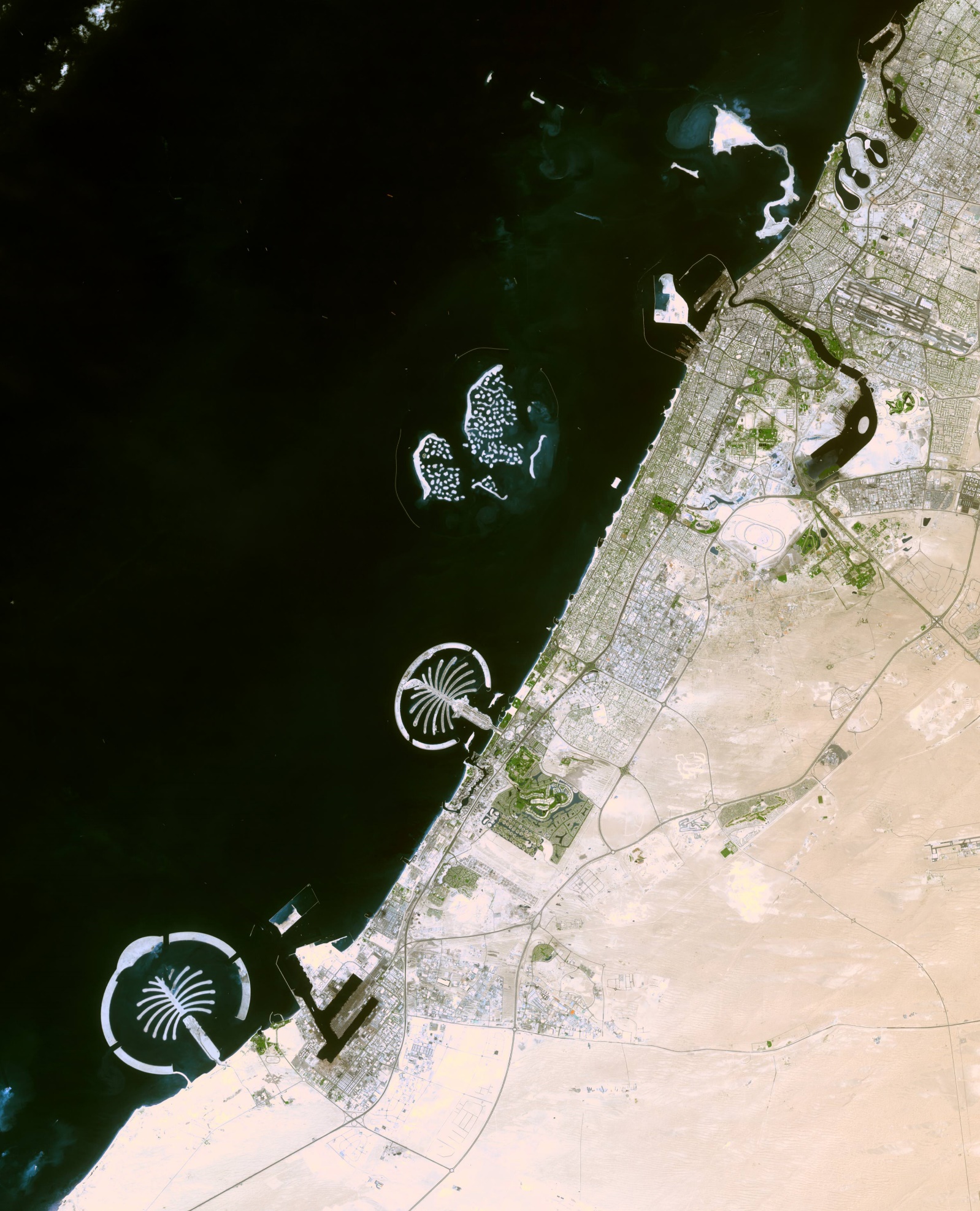 Capture The image of the artificial islands of Dubai by NASA’s Terra satellite on September 18, 2006.

Another engineering achievement visible from the Karman line is the Palm Jumeirah archipelago in the United Arab Emirates, according to NASA’s website. Moreover, by using an 800 mm lens at an average altitude of 400 km, the astronauts of the International Space Station can photograph these artificial islands clearly and transparently.

According to Kers Hadfield, the former commander of the International Space Station, depending on the lighting conditions, some highways, especially highways passing through barren lands such as deserts, can be recognized from space. 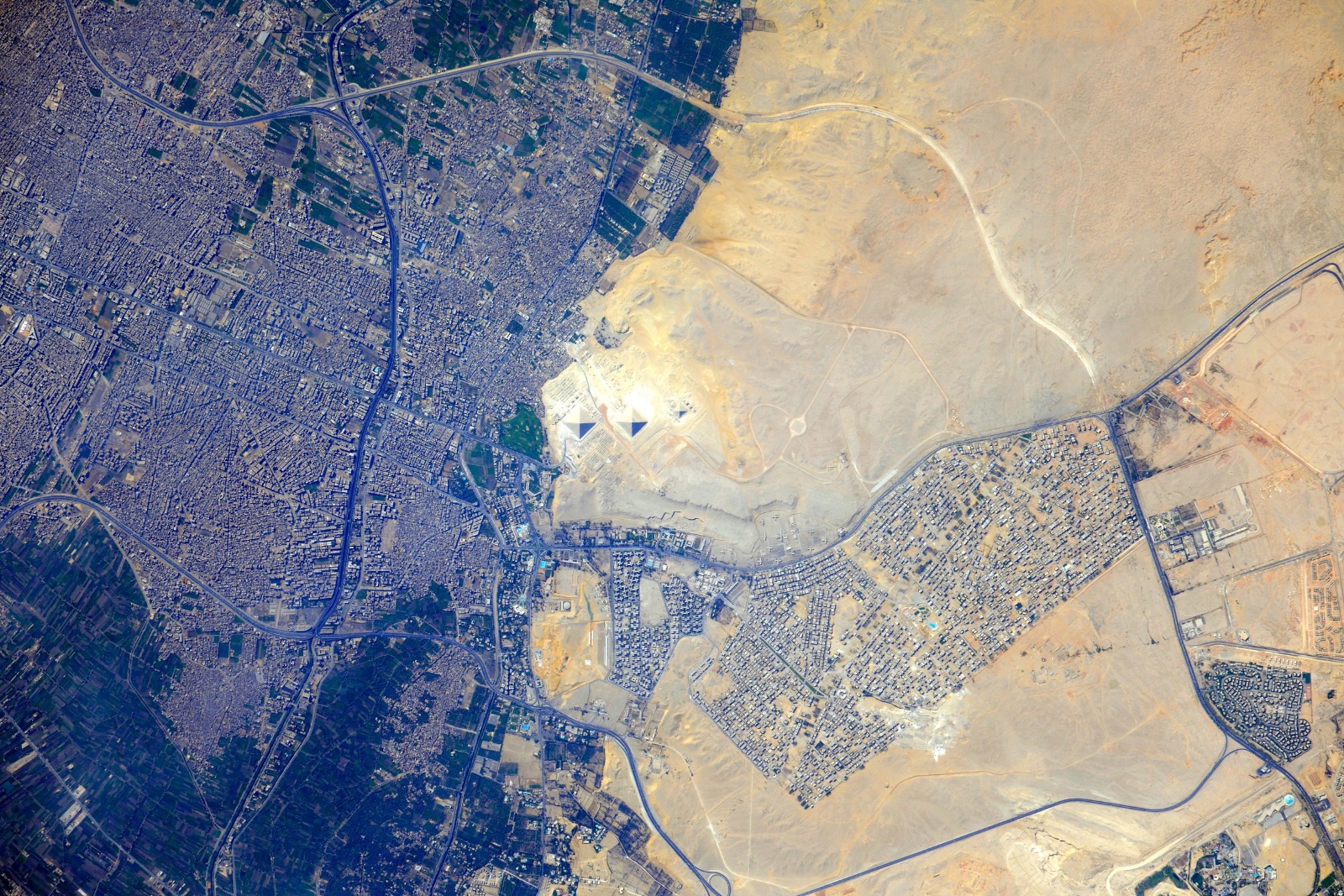 An image of the Pyramids of Giza, Egypt, was taken by a member of the Expedition 32 mission in 2012 from the International Space Station.

Now we come to the central question of the article. Can the Great Pyramids of Giza be seen from space with the naked eye? It seems that there is a little difference of opinion among the astronauts.

Tim Peek, the British astronaut, says that such work is not practical and it is not possible to observe the Egyptian pyramids without additional tools; However, he also believes that by using an 800 mm lens, it is possible to keep the large structures of the Earth with relative clarity.

On the other hand, Leroy Chiao, NASA astronaut and former commander of the International Space Station, insists that he managed to see the Pyramids of Giza while staying on the station.

Even with the naked eye, many phenomena can be seen from the International Space Station. For example, I once managed to find the Great Pyramids with a telephoto. When the light and air conditions suit, the naked eye can distinguish two more giant pyramids as two tiny dots.

Now it’s time for the most famous example of structures visible from space: the Great Wall of China. This myth has been officially proven wrong. The Great Wall of China cannot be seen from space with the naked eye, and it is impossible to do so from an orbiting spacecraft. Confirming this issue, Hadfield wrote in a tweet:

[The Great Wall of China] is very narrow, in addition to blending with the natural contours of the area and its colors. 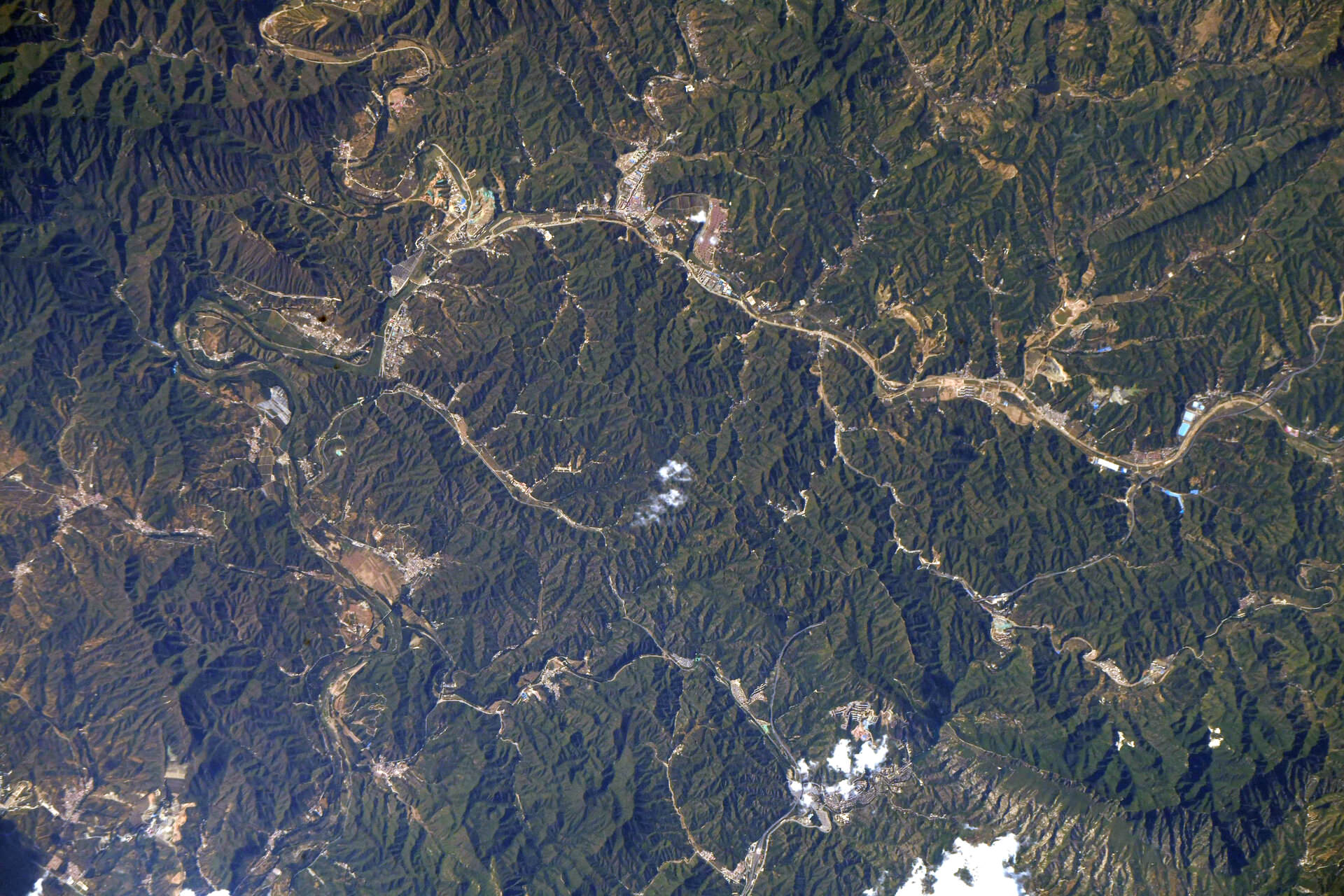 The Great Wall of China image was captured by German ESA astronaut Alexander Gerst in 2018 using an 800mm telephoto lens from the International Space Station.

Chiao, who took the first photo of the Great Wall of China from space, admits that he could not see the wall when he took this picture. But Chiao points out that many cities are visible from space. A claim that former NASA astronaut Clayton Anderson has also confirmed. In 2007, Clayton spent 152 days on the International Space Station.

When you look at Earth from the window of the International Space Station, you can see cities as spots. One of my favorite cities was Omaha, Nebraska, which first appeared before my eyes as a big gray blob. Similarly, the smaller town of Lincoln, near Omaha, appeared as a not-so-large gray blob.

Anderson also points out that we can easily see the areas behind dams and where water has accumulated from space. But identifying the barriers themselves is not an easy task. When asked about the most impressive natural phenomenon seen from space, Anderson said:

It is a difficult question; I personally loved the Sahara. It looked different every time I passed it, primarily through the camera lens.