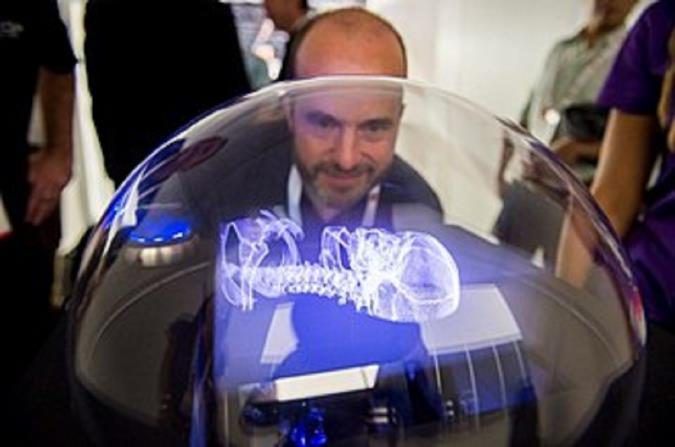 This article addresses the evolving industry of volumetric displays or real (not virtual) 3D displays that do not require any glasses or covers to understand how 3D is displayed and that people can interact in a truly 3D environment.

What are Volumetric displays?

Continuous advances in information technology have led to increased demand for 3D displays. In fact, a wide range of relatively mature 3D equipment is now available on the market. However, existing systems have the disadvantage that users have to use special devices to separate the left and right eye images. Such “assisted observation” systems are well established in many professional applications. However, further expansion in other areas requires “free viewing” systems with improved visual acuity and closer compatibility with visual mechanisms. Relevant technologies are still being developed.

The development of 3D technology is currently motivated by several activities.

Content providers have found their software in multimedia real-world gaming and virtual reality adventure rides. Developers have recognized the opportunity to launch a new generation of 3D graphical user interfaces, and the Internet community determines the data structure for the transfer of 3D objects. Infrastructure preparation for 3D video conferencing is underway. In addition, basic technologies for the future 3D market have made significant progress. As shown in various examples, 3D display development has benefited greatly from recent advances in LC technology. Other factors that will play a major role are the new programmable multimedia signal processors, the rapid growth of high-speed digital networks, and the provision of more computing power at a low cost.

Therefore, there is a high chance of success if there are 3D displays that allow the immediate perception of the space without any disturbing side effects. This is an important technological challenge. Appropriate solutions require a thorough understanding of the mechanisms of binocular vision.

Spatial vision is observed based on the deep monocular and binocular signs present in the scene. Monocular signs are visible to the naked eye and are used to create the illusion of volume and depth on smooth surfaces of the image. Common examples include linear and aerial landscapes, texture slopes, object overlap, and light and shadow distribution. 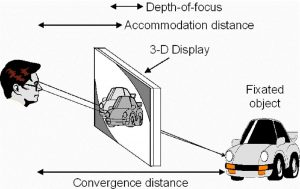 A volumetric display device is a graphical display device that forms a visual image of an object in three physical dimensions instead of the flat image of traditional screens that simulate depth through several different visual effects. They do. One of the definitions proposed by the pioneers in this field is that volumetric displays create three-dimensional images by scattering, scattering, or redistributing light from specific areas in space (x, y, z).

It was first introduced in 1912 and was a major science fiction component, but volume shows are still not widely used in everyday life.

There are numerous potential markets for volumetric displays with applications, including medical imaging, mining, training, advertising, simulation, video games, communications, and geophysical visualization. Compared to other 3D visualization tools such as virtual reality, volumetric displays offer an inherently different kind of interaction, allowing a group of people to gather around the screen naturally and socially without the need to wear glasses. Three-dimensional objects displayed on a volumetric display can have properties similar to real-world objects, including focal depth, parallax, and simultaneous motion of two objects—eyes in the opposite direction.

Various attempts have been made to produce volumetric imaging devices. No “classification” of volumetric displays has been formally accepted, complicated by the large displacement of their features. For example, the brightness inside a volumetric display can be seen directly from the fountain or through an intermediate surface such as a mirror or glass. Likewise, this surface, which does not need to be tangible, can be subjected to a movement such as oscillation or rotation. A category is as follows:

Surface volume (or “swept”) 3D displays rely on the durability of human vision to combine a set of 3D object slices into a 3D image. A variety of swept volume displays are created.

For example, a three-dimensional scene is computationally broken down into “slices,” which can be rectangular, disk-shaped, or spiral-shaped, moving on or off the screen. The two-dimensional surface image (created by surface projection, surface-mounted LEDs, or other techniques) changes as the surface moves or rotates. Due to the continuity of vision, man perceives the constant light volume. The screen’s surface can be reflective, conveying, or a combination of both.

This is probably the most “direct” form of volumetric display. In its simplest form, an addressable volume of active elements is created transparent in the off state but opaque or in the light state. When elements (called voxels) are activated, they show a solid pattern in the screen space.

Several static volume displays with a constant volume use laser light to stimulate visible radiation in a solid, liquid, or gas. For example, some researchers have relied on two-step conversion into a material reinforced with rare earth elements when converting cross-beams of infrared laser beams to the appropriate frequencies.

Recent developments have focused on intangible (open space) implementations of the static volume category. Which may eventually allow direct interaction with the screen. For example, a fog display using multiple projectors can project a three-dimensional image into a volume of space, resulting in a volumetric screen with a static volume.

The technique, introduced in 2006, uses a pulsed focused infrared laser (about 100 beats per second. Each lasting one nanosecond) to destroy the display media rather than glowing plasma balls to Create a focal point in normal weather.

The focal point is guided by two moving mirrors and a sliding lens, allowing it to draw shapes in the air. It is thought that this device can be scaled to any size and allow the creation of three-dimensional images in the sky.

Subsequent modifications such as the use of a neon/argon/xenon/helium gas mixture similar to plasma spheres and a rapid gas recycling system using hoods and vacuum pumps could allow the technology to achieve two colors (R / W) and possibly RGB images with Change the pulse width and intensity of each pulse to adjust the emission spectra of the glowing plasma body. 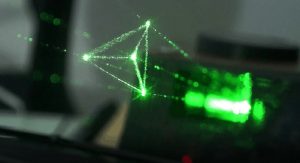 The unique features of volumetric displays, including 360-degree viewing, agreement of convergence and location signs, and their inherent “three-dimensionality,” enable new user interface techniques. Recent work has been done on the speed and accuracy of the benefits of volume displays. The new graphical user interface, and medical applications enhanced by volume displays.

There are also software platforms that provide 2D and 3D content to volume displays.

In short, showing an object in 3D format is a fantasy that we all share. From Star Wars movies to the Black Panther, we have seen numerous science fiction movies that use the concept of “volume display” to provide 3D information in real 3D space.

But now, researchers have proven that we are close to achieving this concept in everyday reality. According to a study published in Nature in 2018, a team of scientists has concluded how to manipulate almost invisible spots in the air and use them to create more realistic and clearer 3D images of the hologram. . The study’s lead author, Daniel Smalley, a physicist at Brigham Young University in Peru, Utah, and his team created a small butterfly that dances on one finger and a picture of a graduate student imitating Laya in a Star Wars scene.

Although these technologies are in the embryonic stage, scientists claim that they have enormous potential and offer major benefits. Volumetric displays, for example, do not put much strain on the eye because we perceive this all-around display as a real-world 3D object.

This is an upgrade of VR or virtual reality monitors. Also, it does not require any headset like AR-VR. In addition, these volumetric displays can work on any 3D input device such as Kinect, Leap Motion, and Structure.

Also applications, a volume screen can be used for three-dimensional human-sized communications, such as in science fiction movies. Humans appear as predicted for a top-secret mission. The medicThisbe used for several purposes, including surgical planning, postoperative examination, education, physician-patient communication, and diagnosis in the medical and healthcare industry. Ultimately, this technology promises to revolutionize gaming.