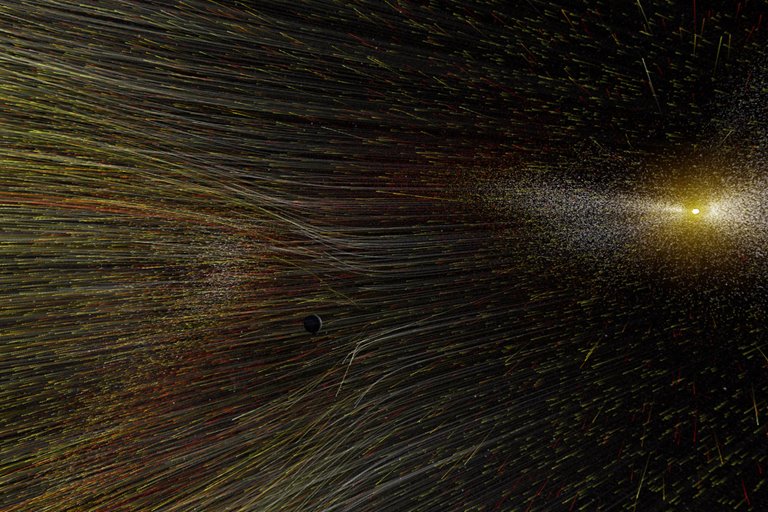 The Solar Wind Is A Flow Of Charged Particles that Affects The Entire Solar System, but What Exactly Is This Phenomenon, And What Effects Does It Have On The Earth And Its Surroundings?

The solar wind is the continuous flow of protons and electrons from the outermost layer of the Sun’s atmosphere, i.e., the corona or solar crown. According to the Space Weather Prediction Center of the US National Oceanic and Atmospheric Administration, these charged particles blow in the solar system at a speed of about 400 to 800 kilometers per second in the plasma state.

When the solar winds reach the Earth, they send masses of charged particles into the magnetosphere (magnetosphere) along the Earth’s magnetic field lines towards the poles. The interaction of these particles with the Earth’s atmosphere can create the beautiful effect of bright auroras over the polar regions.

What is solar wind?

Eugene Parker, a pioneering astrophysicist from America, proposed the existence of solar wind for the first time. The Parker Solar Probe mission, designed to study the Sun closely, takes its name from this outstanding scientist.

In 1957, Parker was working as an assistant professor at the University of Chicago when he realized that the Sun’s scorching corona should theoretically emit charged particles at extremely high speeds. This extreme corona heating is one of the most mysterious aspects of the Sun’s behavior. Solar physicists still do not fully understand why the Sun’s outermost atmosphere is hotter than its surface.

Citing NASA’s Jet Propulsion Laboratory, Parker’s theory explains that in the Sun’s corona, the temperature reaches 2 million degrees Celsius, and the plasma is continuously heated. Eventually, the temperature of the plasma increases so much that the Sun’s gravity can no longer hold it; As a result, it is thrown into space as the solar wind and drags the Sun’s magnetic field along with it.

Parker explained in 2018 that his theory received a lot of criticism at the time of its presentation. Quoting Parker, the first reviewer of his paper said: “I suggest that Parker go to the library and read up on a subject before attempting to write an essay on it; Because this theory is pure nonsense.

Eventually, astrophysicists such as Subramanian Chandrasekhar, the Indian-American scientist who decades later was named after NASA’s Chandra X-ray Observatory, rose to support Parker’s theory. According to the University of Chicago, although Chandrasekhar was not interested in the idea of ​​particles, he accepted Parker’s theory; Because he couldn’t find a problem with its math. Then in 1962, NASA’s Mariner 2 spacecraft detected solar wind particles during its trip to Venus.

In addition to the continuous solar wind streams, the Sun sometimes ejects large amounts of those charged particles in one go. These events, known as coronal mass ejections (CMEs), can create geomagnetic storms associated with beautiful aurora displays around Earth. Still, they can cause damage to power grids, telecommunication networks, and satellites that are orbiting the Earth.

How far can the solar wind blow? 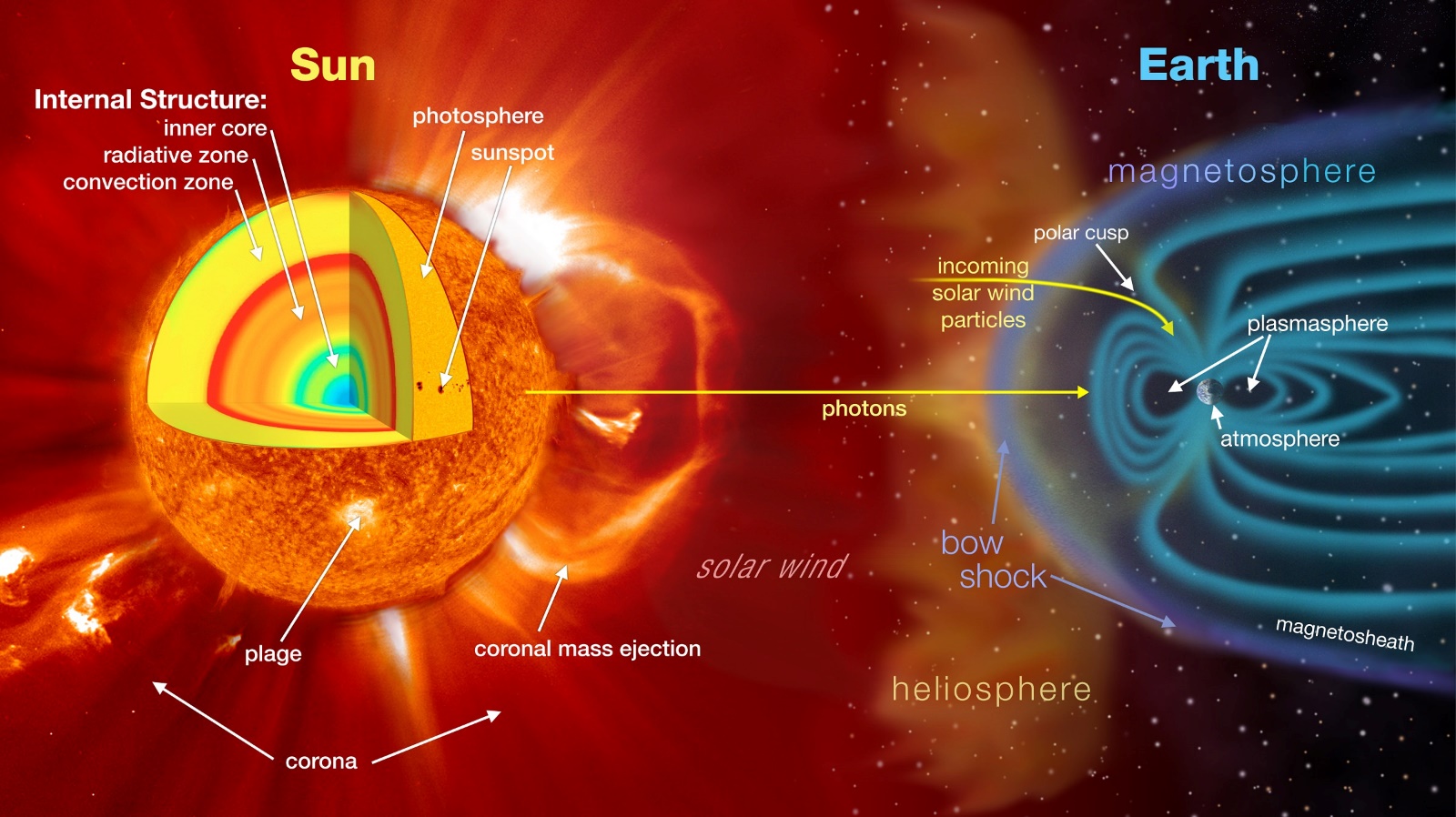 The solar wind consists of charged particles that bombard the Earth’s magnetosphere.

The solar wind blows in the solar system far beyond the orbit of Pluto and forms a giant bubble called the heliosphere. According to the European Space Agency, the heliosphere is in the form of an elongated balloon that moves with the Sun. Its closest boundary is approximately one hundred astronomical units (AU) from the Sun. An astronomical unit is an average distance from the Earth to the Sun, roughly 150 million kilometers.

The heliosphere acts as a protective shield and protects us from cosmic rays consisting of energetic particles that can damage living cells. Cosmic rays originate outside our solar system and travel through space at nearly the speed of light. Without the protective bubble, these energetic particles would bombard the Earth continuously. “Without the heliosphere, life would certainly have evolved differently, or perhaps not at all,” says Richard Marsden, heliophysics at the European Space Agency.

Although the solar wind flows continuously from the Sun, its properties such as density and speed vary during the 11-year cycle of the Sun’s activity. During this cycle, the number of sunspots and the level of radiation and ejected material fluctuates from the solar maximum to the minimum. These changes affect the characteristics of the solar wind, including the strength of the magnetic field, speed, temperature, and density.

According to the website spaceweatherlive.com, which predicts space weather, the average speed of the solar wind is approximately 300 kilometers per second (1.1 million kilometers per hour). A Category 5 hurricane can hit its surroundings at a rate of 241 km/h.

During Mariner 2’s flyby of Venus, the spacecraft not only discovered the solar wind; He also identified two distinct streams of the solar wind, one fast and the other slow. The slow current’s speed is nearly 349 kilometers per second, While the swift current moves at twice this speed.

The origin of the fast flow of the solar wind was identified in 1973 using X-ray images of the Sun’s corona from the Skylab space station. Coronal cavities, or cooler regions of the Sun with open magnetic field line structures that allow the solar wind to propagate relatively quickly, are responsible for forming fast solar winds.

Anomalously fast solar winds can generate from the Sun’s corona during mass ejection events. During these events, the wind speed can reach more than a thousand kilometers per second. Despite the staggering rates of the fast solar wind streams, slower solar winds have baffled scientists. “The slow solar wind is in many ways a bigger mystery,” says Jim Klimczak, a solar physicist at NASA’s Goddard Space Flight Center in Maryland. 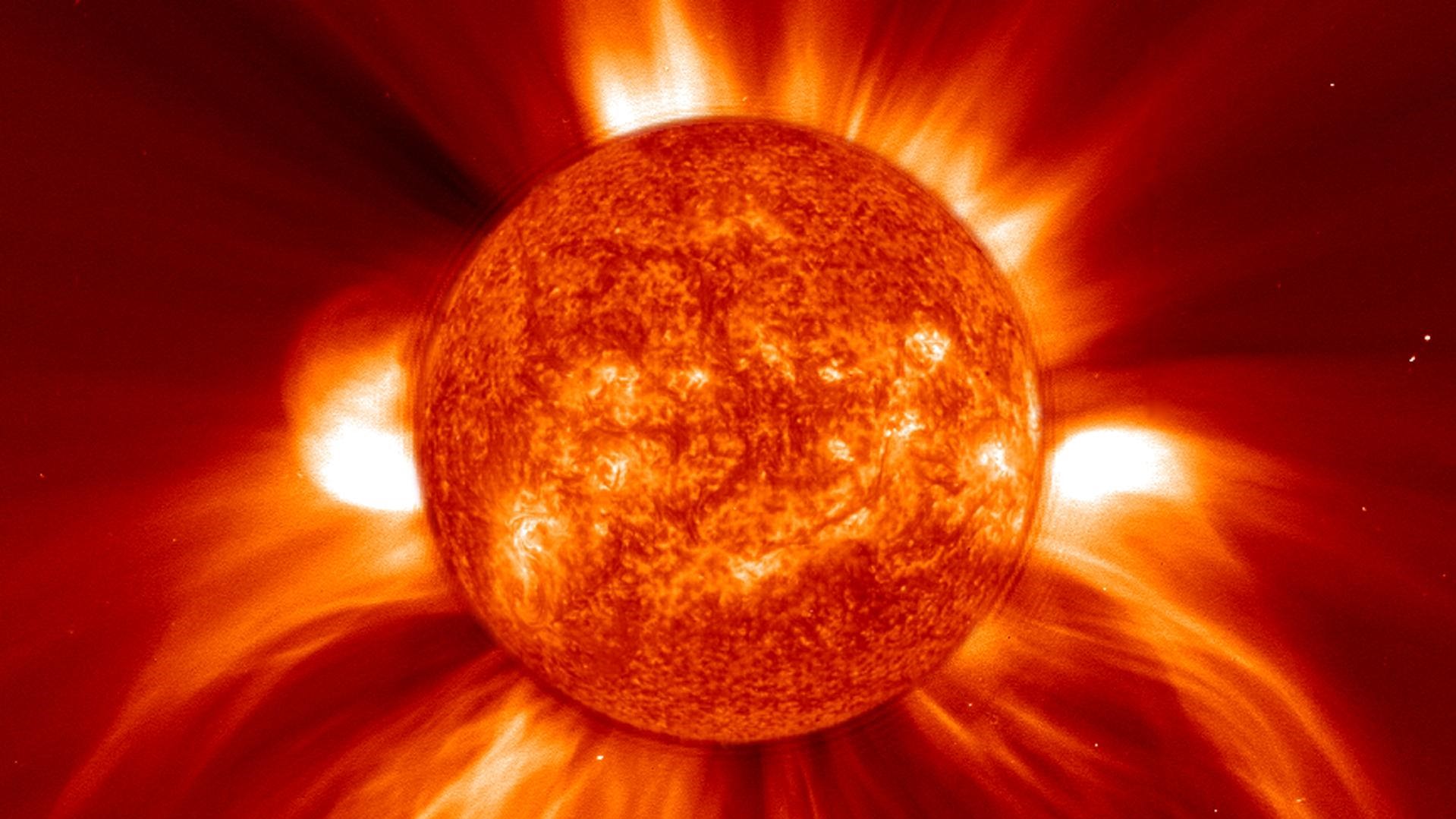 Mass ejection from the Sun’s corona is seen by the Solar and Heliospheric Observatory (SOHO).

NASA’s Ulysses spacecraft, launched in 1990, revealed some clues about the origin of the slow flow of the solar wind as it flew around the Sun’s poles. The spacecraft found that the solar wind originates mainly from the solar equator during periods of minimum solar activity.

NASA’s Parker Solar Probe will investigate this mystery of the Sun during its seven-year mission. According to NASA, as the solar cycle progresses towards maximum activity, the structure of the solar wind changes from two distinct regimes (fast at the poles and slow at the equator) to a mixed and heterogeneous flow. Klimchak sees Parker as promising to provide new fundamental knowledge about this.

The effects of our wind star are felt throughout the solar system. “My feeling is that if the Sun sneezes, the Earth will get cold,” says Nicky Fox, director of the Heliophysics Unit at NASA Headquarters. “Because we always feel the impact of what happens on the Sun, thanks to the solar wind.”

On Earth, the solar wind is responsible for forming dazzling auroras around the polar regions. In the Northern Hemisphere, this phenomenon is called the Northern Lights; in the Southern Hemisphere, it is called the Southern Lights. If the solar wind speed is high enough, geomagnetic storms may form. These storms can extend the auroras closer to the equator compared to calmer space weather conditions. 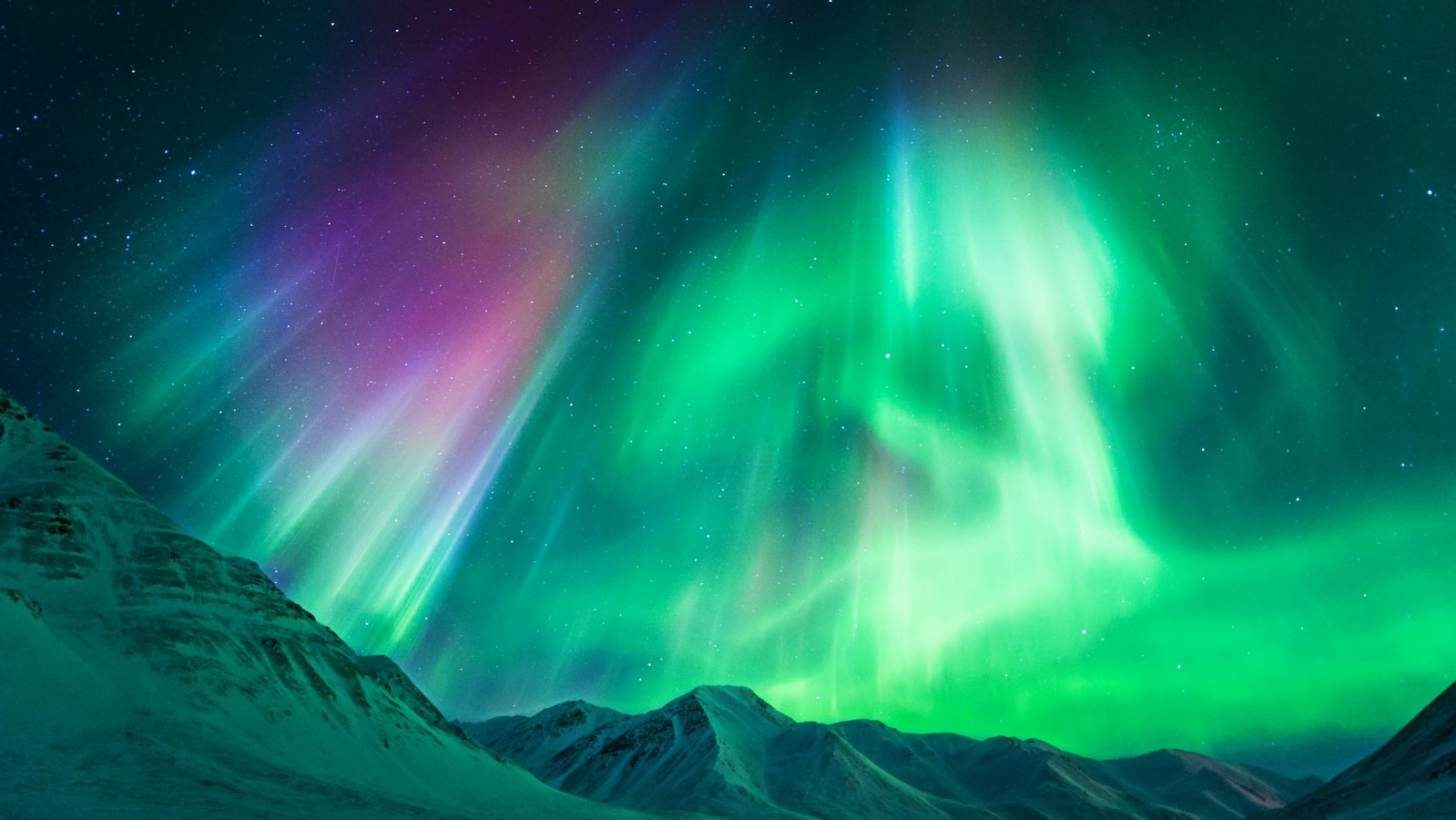 Mass ejection events from the Sun’s corona can create geomagnetic storms that lead to stunning auroras like this one in Alaska.

Geomagnetic storms can also knock out satellites and power grids and threaten astronauts. During these storms, astronauts on the International Space Station must seek shelter, and until the radiation storm has passed, all spacewalks are stopped, and sensitive satellites are turned off.

SpaceX has already seen the damage that space weather can cause, Just as a geomagnetic storm destroyed 40 Starlink satellites worth more than $50 million in February 2022. During release in shallow orbits (between 100 and 200 km), Starlink satellites turn on their engines to overcome the drag force and raise themselves to a final altitude of approximately 550 km.

A denser thermosphere means more drag, which can be problematic for satellites. In February 2022, a batch of Starlink satellites that had just been released into orbit failed to overcome the significantly increased drag caused by a geomagnetic storm; As a result, they started to fall to the ground and finally burned up in the atmosphere.

Solar weather can have costly consequences; Therefore, increasing our understanding and monitoring and predicting such events is essential. Solar wind scientists are working on learning more about space weather and improving predictions. “We cannot ignore space weather,” says NASA. But we can take appropriate measures to protect ourselves.”

How do scientists study solar wind? 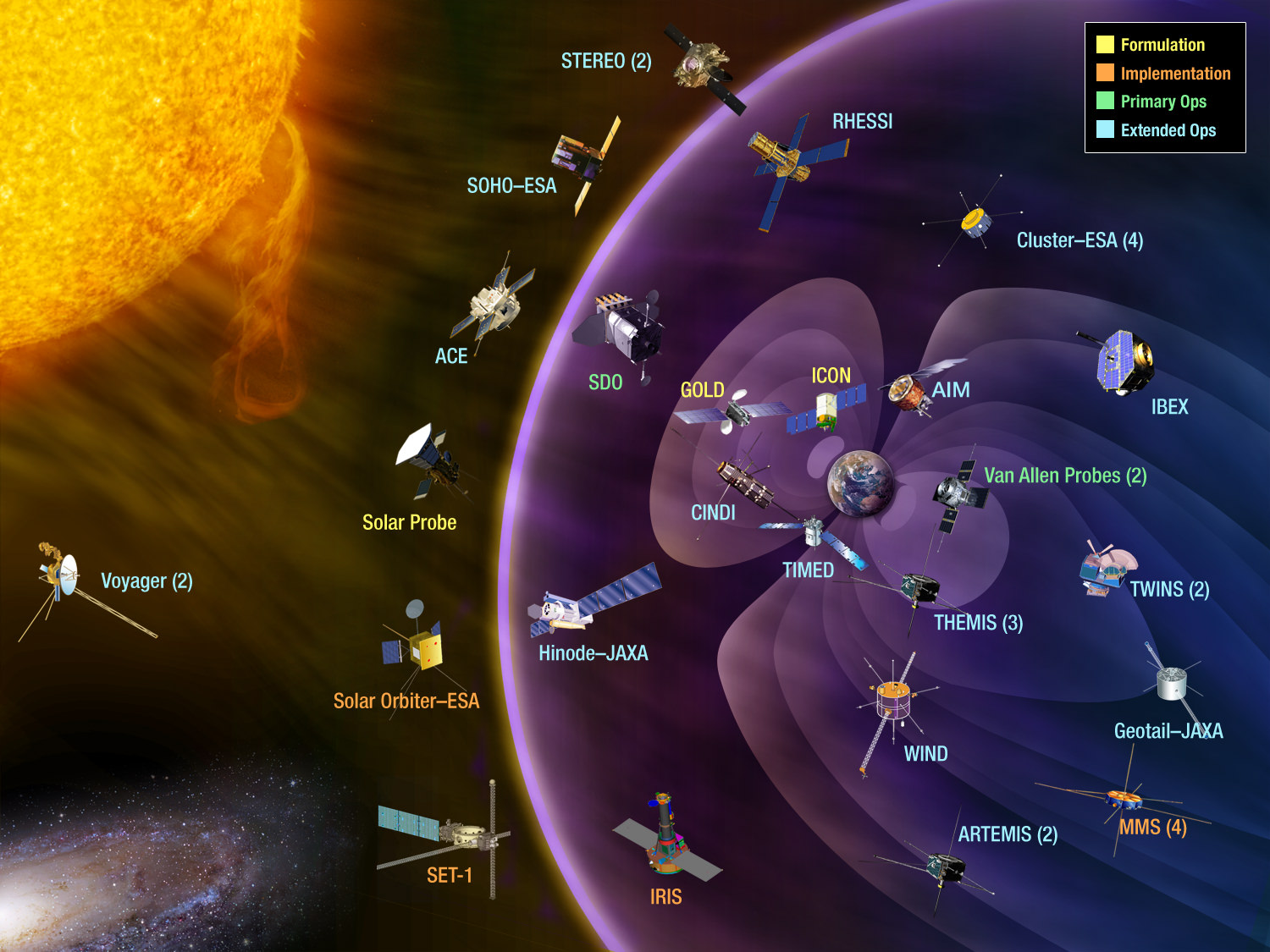 The Heliophysics System observatory consists of a fleet of spacecraft designed to study our dynamic solar system.

Heliophysics missions study the Sun and its effects on the Solar System, including the impact of the solar wind. According to NASA, these missions aim to understand everything, From how planetary atmospheres are formed and how space weather affects astronauts and near-Earth technologies to understanding the physics governing our cosmic neighborhood in space.

Understanding the solar environment is not a simple achievement; For this reason, a whole fleet of spacecraft is working to understand the Sun and its behavior. These missions can be considered a single observatory called the Heliophysics System Observatory (HSO).

The heliophysics system observatory consists of several solar, heliospheric, geospace, and planetary spacecraft; including the Parker Solar Probe with the bold goal of touching the Sun, the Solar and Heliospheric Observatory (SOHO), which is a joint mission of NASA and the European Space Agency, the Solar Earth Relations Observatory (STEREO) which consists of two almost identical observatories, and the European Space Agency’s Solar Orbiter which For the first time, it explores the unknown polar regions of the Sun.