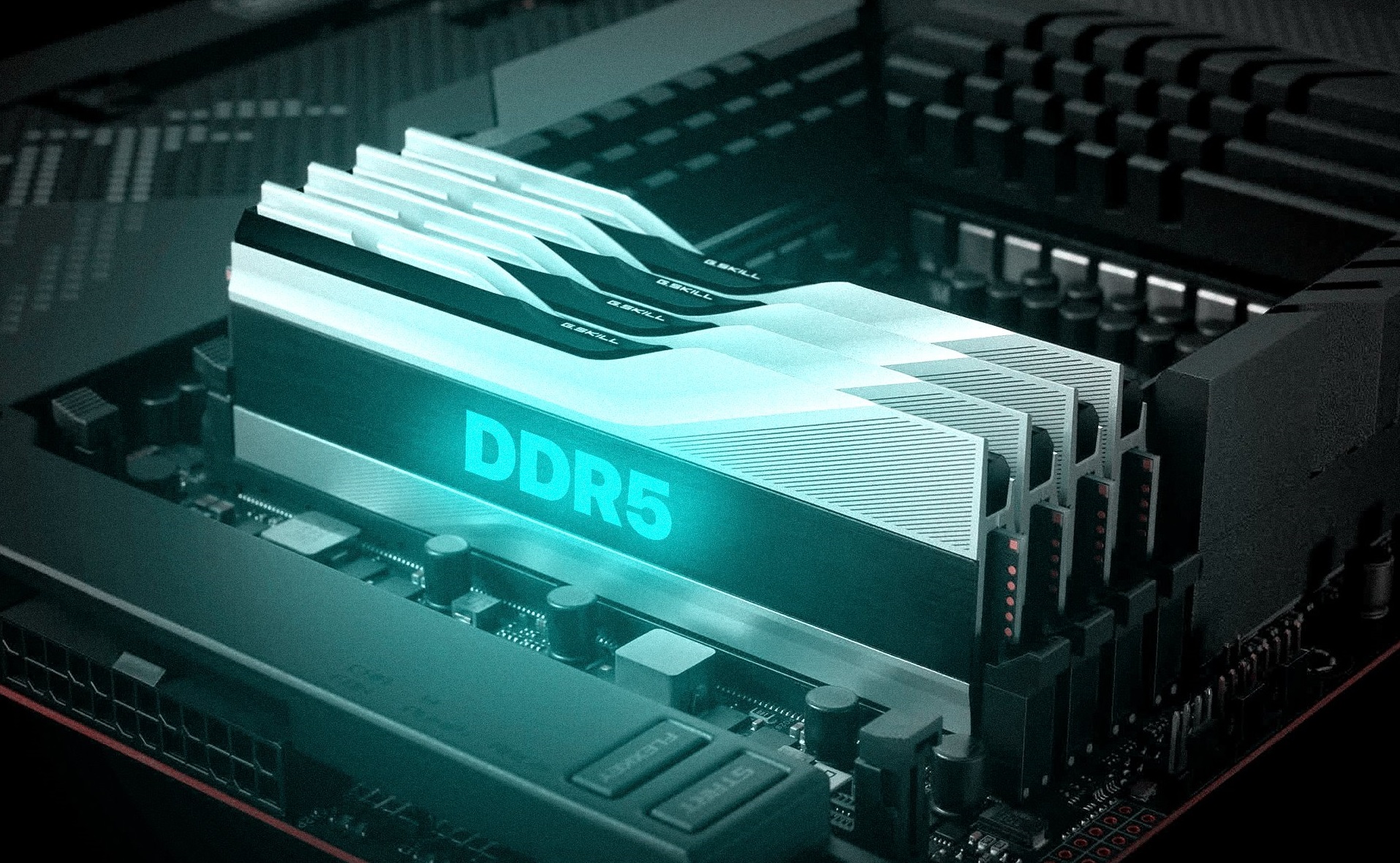 With the support of Intel Alder Lake 12th generation processors for DDR5 and the possibility of AMD supporting Zen chips in the next four years, the choice between DDR4 and DDR5 will be a bit challenging. Join What is DDR5 and what are its capabilities?

DDR5 is an evolved version of DDR4 that focuses on increasing density, increasing RAM bandwidth, and reducing power consumption. DDR5 stands for Double Data Rate 5 Synchronous Dynamic Random-Access Memory, the latest generation of computer RAM that was initially scheduled to be launched in 2019. But the unveiling of this memory module was delayed and finally introduced in early 2021 (1400) as an expensive product. To better understand the capabilities of DDR5, we will first introduce some of the specifications of RAM.

The speed of Rome’s performance depends on several factors, including frequency, bandwidth, the number of channels, and latency. Most people consider the frequency, or the number of commands that RAM can process per second, to be mistaken for RAM speed, while the RAM frequency is only one factor determining this module’s speed. More elements are involved in calculating the RAM speed. The higher the number of REM cycles per second, the more data is transferred, and the smoother the RAM, the smoother the performance.

In the gaming discussion, more RAM frequency does not always mean better game performance. Usually, for heavy games, RAM capacity is more important than its frequency, and the number of games that use the maximum RAM frequency is a handful.

These numbers refer to the generation of RAM and its data transfer speed. The number displayed after DDR or PC and before the space bar indicates the age of RAM, Such as DDR2 / PC2 or DDR3 / PC3. The number after DDR and the distance line shows the data transfer rate in each complete cycle (round trip) in mega transfers per second (MT / s), But the frequency or number of processes performed per second is expressed in terms of MHz.

The number after the PC and the space bar shows the bandwidth in megabytes per second. For example, the PC3-12800 has a bandwidth of 12.800 Mbps. The second number is equivalent to the data transfer rate in the whole cycle multiplied by eight; This means that if only the bandwidth in the RAM specification was labeled in megabytes per second, it is enough to divide that number by eight to reach the data transfer rate in the whole cycle. Each number independently presents the same information in different forms.

Occasionally on RAM modules, you will encounter numbers such as 9-10-9-27, which indicate the module’s performance in nanoseconds. The lower these numbers, the faster Rome responds to requests. Just as important as RAM speed and bandwidth are the timing and delay in responding to requests or waiting times: 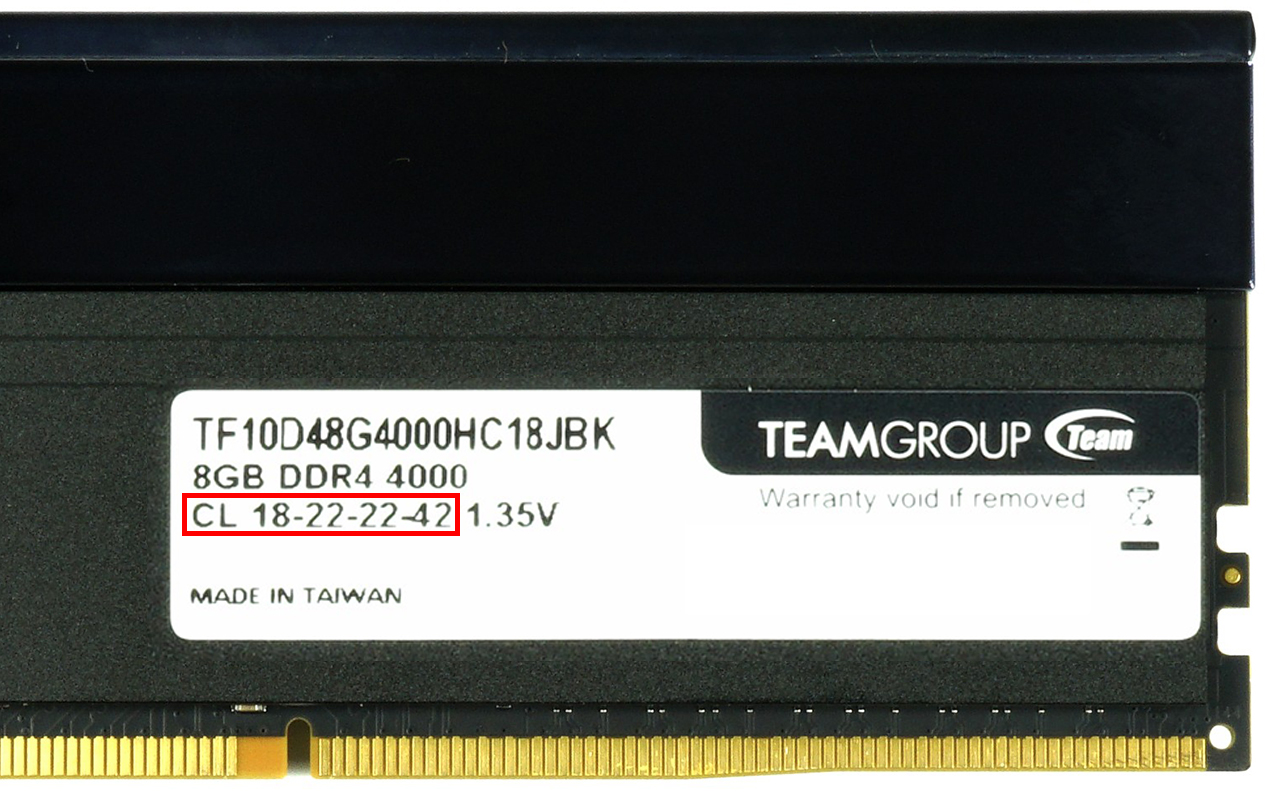 Finally, you should note that these schedules are applied with the memory controller and can be changed if the motherboard allows. It is possible to improve RAM performance by overclocking and setting programs.

RAM equipped with an error correction code (ECC) is a particular type of memory module that aims to detect and correct data corruption. ECC RAM is used on servers where damaging critical data can be catastrophic. Consumable motherboards and processors typically do not support ECC-compliant RAM.

As we said, the actual RAM speed depends on the frequency and type of DDR and the CL timing (the first of the four numbers that indicate the RAM timing).

In early November 1400, while unveiling the twelfth-generation Alderlick processors, Intel announced they would support both DDR4 and DDR5 RAM. Still, the next generation of AMD processors with support for this module has not been introduced yet. Therefore, only Intel 12th generation processors can currently be equipped with DDR5 RAM.

If you want to buy a computer or motherboard equipped with AlderLike processors, migrating to DDR5 will bring many changes. Before doing so, you need to know more about DDR5, its capabilities, and its differences from the previous generation.

Today, the maximum capacity offered in DDR4 RAMs is 32 GB. With the use of 4 DIMM DDR4 RAM 4 slots, you can upgrade the PC RAM of a regular user to 128 GB to satisfy any professional gamer. DDR5 promises capacities beyond these numbers. Advanced systems with four DDR5 DIMM slots can reach 512GB, and even more powerful systems with eight DDR5 DIMM slots can reach a capacity of one terabyte.

Most consumers and gamers do not need more than 16 or 32 GB of memory, and there may be only one person out of 30 who has even increased their system RAM to 512 GB for particular purposes such as research or rendering. 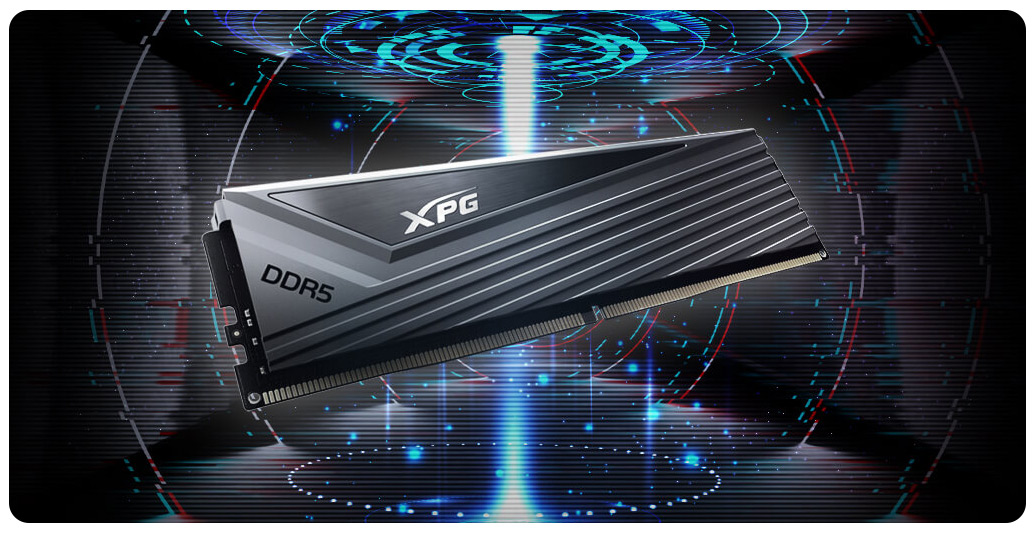 DDR5 offers about 50% more bandwidth than its predecessor. Some DDR4 overclocked RAMs can reach frequencies over 5,000 MHz; however, that 4800 MHz is the base frequency of DDR5 RAMs, and it is even possible that the frequency of this generation of RAMs will increase to 8400 MHz in the coming years.

Over time, the energy consumption of the Rams improves from generation to generation, and DDR5 is no exception. It may not be so important in areas that do not pay much for electricity or where there is an unlimited electricity supply. Still, optimal consumption can be very effective in the performance of portable devices such as laptops.

Comparison of DDR5 and DDR4

From what we have said so far about the capabilities of DDR5 RAM, it can conclude that DDR5 has generally improved in every way compared to its predecessor. Wider bandwidth and more capacity, lower power consumption, and ECC utilization all promise significant performance for the next generation of RAMs in the years to come:

The right time to migrate to DDR5 RAMs

Two years after the introduction of DDR5 RAMs, many motherboards and processors still do not support this technology. As DDR4 ‌ found its place in the market several years after its unveiling, it is hoped that DDR5 will be more prevalent shortly.

It may not be a good time to migrate to DDR5 RAM; On the one hand, only Intel 12th generation processors currently support DDR5, and it is also possible that the next generation AMD processors will be marketed with this technology, and on the other hand, the current DDR5 RAMs in terms of volume, speed and performance. Not much different from flagship and overclocked DDR4 RAMs, But compared to them, they are sold at a higher price (about 30 to 40% more expensive).

In other words, instead of buying 4800MHz DDR5 RAM, you can now purchase 5,000MHz gaming RAM and wait until the chip shortage crisis improves and DDR5 becomes more ubiquitous.

Comparison of DDR5, LPDDR5, and GDDR5

In summary, LPDDR5 is used for portable devices such as smartphones and laptops. DDR5 for PC and GDDR5 is the graphics memory used in some graphics cards. DDR5, LPDDR5, and GDDR5 are DRAM-based and express a single specification or standard, But there are essential differences between them.

DRAM or Dynamic Random Access Memory is a dynamic direct access memory that uses a capacitor instead of a transistor to store and exchange information. This semiconductor memory is a common type of random access memory, or RAM, commonly used in computers and servers for the data or program code required by the processor.

The most common RAM in the current PC market is DDR4. In July 2020, the JEDEC Association officially introduced the DDR5 RAM. The frequency of this RAM starts from 4800 MHz and can be increased to 6400 MHz in the future.

LPDDR or Low Power Double Rate SDRAM is a type of DDR RAM that consumes less energy and is smaller than the same generation of DDR RAM. The LPDDR5 RAM standard is officially used in smartphones today, and on February 20, 2019, it was introduced by the JEDEC Association. It is faster than its predecessor, the LPDDR4, and its data transfer rate has increased from 3,200 megabytes per second to 6,400 megabytes per second. 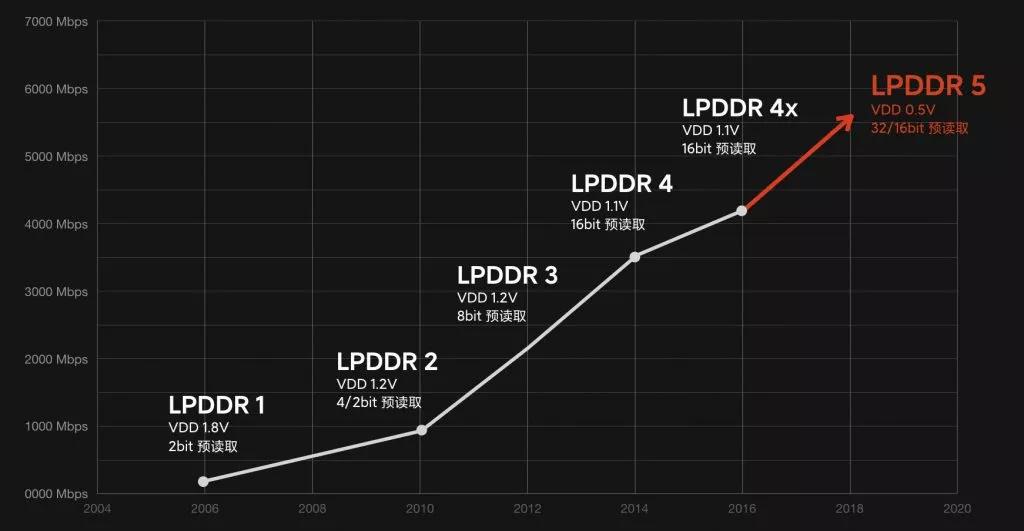 GDDR or Graphics DDR is mainly used for high-speed image processing for computer graphics and can be quickly introduced as a graphics memory with a higher frequency and less heat than DDR. GDDR5 is known as the next generation of video RAM, and currently, GDDR6 is used in Nvidia’s RTX30 series and the latest 6000 series graphics cards.

Despite the differences in the performance of DDR, LPDDR, and GDDR, these rams go through different development paths and stages of improvement. The letters LPDDR and GDDR appear to be derived from the DDR standard, But in reality, this only applies to the first few generations, and at present, each is evolving in different directions.

LPDDR and DDR have relatively similar applications (LPDDR before LPDDR4), based on the same generation of DDR, But after four generations, the two began to develop differently. DDR mainly improves performance by increasing the core frequency; LPDDR, on the other hand, increases the number of prefetch bits.

In terms of commercialization, LPDDR4 was mass-produced before DDR4.

LPDDR5 was introduced before DDR5 and was mass-produced before the official approval of the DDR5 specification. Therefore, it can say that LPDDR5 is not dependent on DDR5 enhancements and is itself a new generation of low-power platforms for smartphone platforms and a redesigned version of LPDDR4X. 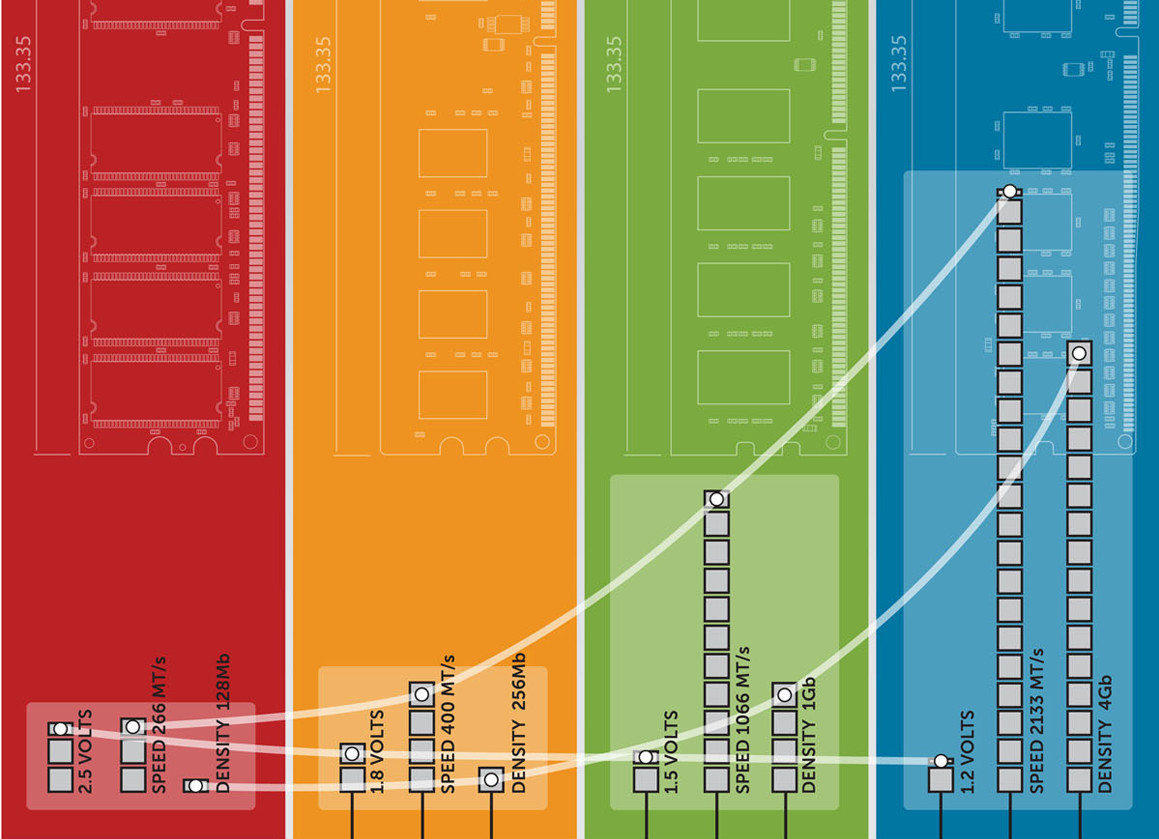 DDR5 RAMs are now easily found in the market at high prices. These rams have a long way to go before they are complete; For this reason, it can say that buying DDR4 RAMs is a better choice than DDR5 RAMs. In addition, to migrate to the latest generation of RAM, you must also change the processor and motherboard of the computer, which is not yet economically justified.

What do users think about DDR5 RAM? How long do you think this generation of Rome will take to penetrate the market?

This article explores DDR5, its capabilities, and everything you need to know about it.