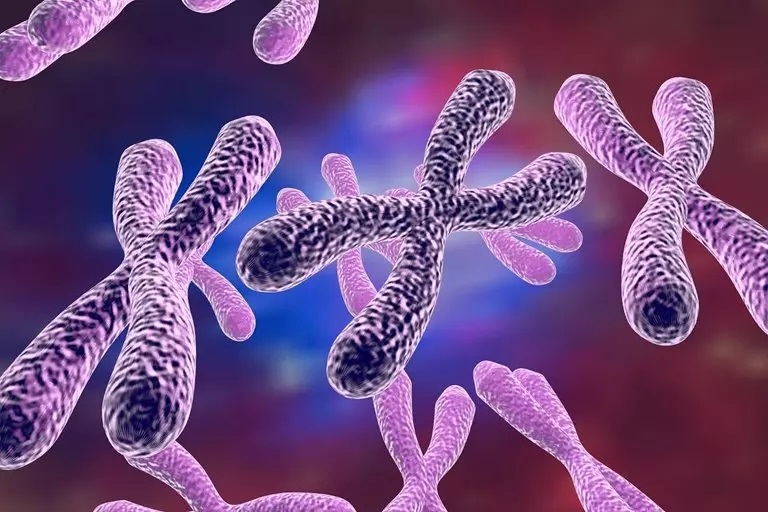 What Is A Chromosome?

Chromosomes Are Filamentous Structures That Are Located Within The Nucleus Of Plant And Animal Cells. Each Chromosome Is Made Up Of A Protein And A Deoxyribonucleic Acid (DNA) Molecule. DNA Is Passed From Parents To Children And Contains Special Instructions That Make Each Living Thing Unique.

The term chromosome (color body) comes from the color of the Greek word (chroma) and body (soma). Scientists have given this name to chromosomes because they are cellular structures or bodies strongly colored by the particular colors used in research.

What do chromosomes do?

The unique structure of chromosomes holds DNA tightly around spiral-like proteins called histones. Without such packaging, DNA molecules are so long that they do not fit inside cells. For example, if all the DNA molecules in a human cell are separated from their histones and placed together, they can grow up to 6 feet (1.8 m) in length.

For an organism to grow and function properly, cells must constantly divide to produce new cells to replace old ones. During cell division, it is essential that DNA remains intact and evenly distributed between cells. Chromosomes are a key part of the process that ensures that DNA is accurately copied and distributed during cell division. However, in rare cases, mistakes also occur.

Changes in the number or structure of chromosomes in new cells can lead to serious problems.

For example, in humans, some types of leukemia are caused by defective chromosomes attached to broken chromosomes.

It is also important that reproductive cells, such as eggs and sperm, contain the correct number of chromosomes and correct their chromosome structure. Otherwise, the development of the offspring may be impaired.

For example, people with Down syndrome have three copies of chromosome 21 instead of the two present in other people.

Do all living things have the same type of chromosomes?

The number and shape of chromosomes vary among living organisms. Most bacteria have one or two circular chromosomes. Humans, along with other animals and plants, have linear chromosomes paired in the nucleus of cells.

The cell divides, and the resulting cells divide several times, eventually forming an adult with a complete set of chromosome pairs in almost all of its cells.

In addition to the linear chromosomes found in the nucleus of a cell, human cells and other complex organisms have a much smaller type of chromosome that resembles what is found in bacteria. This circular chromosome is found in mitochondria, which are structures outside the nucleus that act as cell powerhouses.

Scientists think that mitochondria were independent bacteria with the ability to convert oxygen into energy in the past. When these bacteria invaded cells that could not utilize oxygen, the cells retained them, and over time, the bacteria became modern mitochondria.

What is a centromere?

The centromere helps keep chromosomes in the right position in the cell during the complex process of cell division. The chromosomes are copied before the new cell is produced, and the centromere acts as the junction for the two halves of each replicated chromosome, known as the sister chromatids.

What is a chromatid?

Put, during DNA division, when a cell divides, the cell must copy its DNA and then transfer half of it to one cell and half to another. As you know, DNA is arranged in chromosomes, so when a chromosome replicates or makes a copy of itself, the resulting genetic material is put together into two chromosomes called chromatids.

What is a telomere?

In many cell types, telomeres lose some of their DNA with each cell division. Eventually, when all telomere DNA is destroyed, the cell can no longer proliferate and die.

White blood cells and other cells with a very high cell division rate have a special enzyme that prevents their chromosomes from losing their telomeres. Because they retain their telomeres, they usually live longer than other cells.

Telomeres are also involved in cancer. Malignant cell chromosomes usually do not lose their telomeres and contribute to the uncontrolled growth that makes cancer so destructive.

How many chromosomes do humans have?

What is a karyotype?

A karyotype is an image of an individual’s chromosomes. To produce this image, the chromosomes are examined for isolation, staining, and under a microscope. This is usually done using chromosomes in white blood cells.

The image of the chromosomes is taken under a microscope and then cut, and the chromosomes are sorted by size and from largest to smallest. An experienced cytogenetic can identify missing or extra pieces of chromosomes. The karyotype of a man is shown in the figure below.

How are chromosomes numbered?

How are chromosomes inherited?

In humans and most other complex organisms, one copy of each chromosome is inherited from the female parent and the other from the male parent. This explains why children inherit some traits from the mother and others from the father.

The pattern of inheritance of the small circular chromosome found in mitochondria is different. Only oocytes (not sperm cells) retain their mitochondria during fertilization; Therefore, mitochondrial DNA is inherited from the female parent. Few diseases, including some forms of hearing loss and diabetes, have been linked to mitochondrial DNA in humans.

Inheriting extra copies or fewer sex chromosomes can lead to serious problems. For example, women who have extra copies of the X chromosome are usually taller than average, and some have mental retardation.

Men with more than one X chromosome have Kleinfelter syndrome, a condition characterized by stunting and often impaired fertility. Another syndrome caused by an imbalance in the number of sex chromosomes is Turner syndrome.

Women with Turner syndrome have only one X chromosome. They are very short, usually do not mature, and some may have heart or kidney problems. 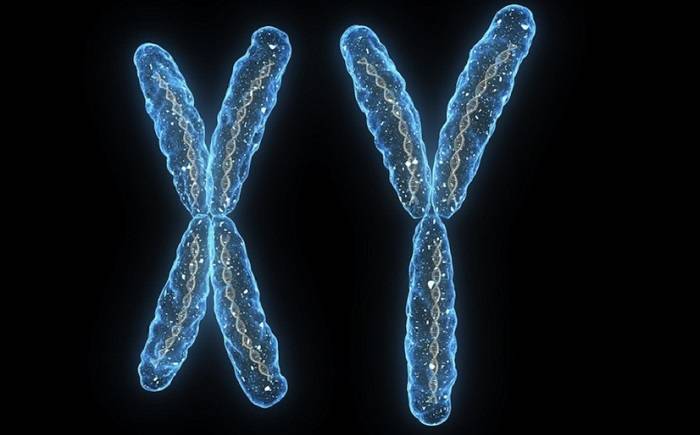 Facts about the X chromosome and the Y chromosome

1. In the nucleus of each cell, DNA is packaged in filamentous structures called chromosomes.

2. Most human cells have 23 pairs of chromosomes. One set of chromosomes comes from the mother, while another set is inherited from the father. The 23rd pair are sex chromosomes, while the other 22 pairs are called autosomes.

6. Mammalian females have two X chromosomes in each cell. However, one of the X chromosomes is inactive. This inactivation prevents transcription so that the amount of X-dependent genes is not doubled, which can be potentially dangerous. An inactive X chromosome is compressed into a small, dense structure in the nucleus and is called a charged body. Cargo objects are commonly used to determine gender.

8. Some women have amazing color vision. This condition is sporadic and is called tetrachromatic, and depends on the X chromosome. These women can see up to 100 million shades of color because they have four types of cone cells in their eyes instead of the usual three.

9. Contrary to popular belief, calico is not a breed of cat but a distinctive coat color pattern dependent on the X chromosome. More than 95% of calico cats are female. The fur on the Calico cat is orange and black, and the color depends on which X chromosome is inactive inside each piece of the coating.

10. In genealogy, the male lineage is often traced using the Y chromosome because this chromosome is passed only from the father.

11. All people who carry a Y chromosome are linked by a common ancestor, the XY, who (probably) lived about 300,000 years ago.

12. The Y chromosome contains a gene called SRY, which causes testicles to form in the embryo, leading to the male’s internal and external genitalia growth. If there is a mutation in the SRY gene, the embryo will develop female genitalia despite having XY chromosomes.

13. Variation in the number of sex chromosomes in a cell is quite common. Some men have more than two X chromosomes in all of their cells (XXY is called Kleinfelter syndrome), and many men lose their Y chromosome cells as they get older. Smoking may accelerate this process.

14. Some genes that were thought to be missing on the Y chromosome have actually been displaced and transferred to other chromosomes.

15. Most of the Y chromosome is made up of duplicate pieces of DNA, and special techniques are needed to sequence and sequence these very similar pieces.

What are chromosomal abnormalities?

An example of a disease caused by Down syndrome is numerical abnormalities characterized by mental retardation, learning difficulties, certain facial features, and poor muscle tone (hypotension) in infancy.

A person with Down syndrome has three copies of chromosome 21 instead of two. For this reason, Down syndrome is also called trisomy 21. An example of a monosome in which a person lacks a chromosome is Turner syndrome.

In Turner syndrome, the female sex is born with only one sex chromosome, an X, and is usually shorter than usual, unable to conceive, and has other problems.

Part of the chromosome is lost or deleted.

A portion of a chromosome duplicates and leads to extra genetic material.

Part of the chromosome is broken, upside down, and then re-connected. As a result of this phenomenon, the genetic material is reversed.

Chromosomal abnormalities can be inherited from one parent (such as displacement) or in a new person. This is why chromosomal tests are often performed on parents when determined that a child has some abnormality. 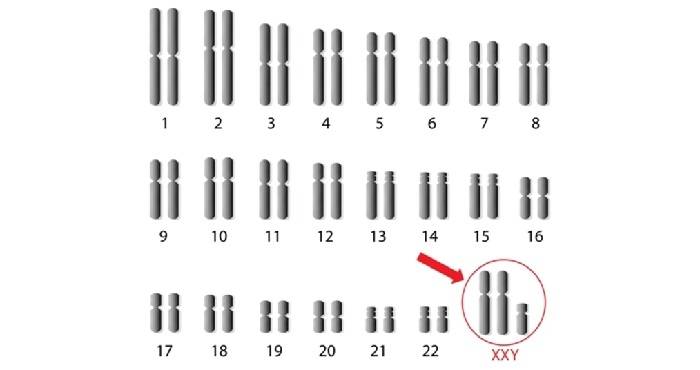 How do chromosomal abnormalities occur?

Chromosomal abnormalities usually occur when an error occurs in cell division. There are two types of cell division: mitosis and meiosis.

Mitosis leads to the formation of two cells that are copies of the original cell. A cell divides into 46 chromosomes and turns into two cells, each with 46 chromosomes. This type of cell division occurs throughout the body except in the reproductive organs. This is how most of the cells that make up our body are made and replaced.

Meiosis results in the production of cells that, instead of 46 chromosomes, have half of the chromosomes, 23 chromosomes. Meiosis occurs in the reproductive organs and leads to the formation of eggs and sperm.

In both processes, the correct number of chromosomes is to be established in the resulting cells.

Of course, errors in cell division can lead to the formation of cells that have more or fewer copies of chromosomes. The error can also occur when chromosomes are duplicated.

Other factors that can increase the risk of chromosomal abnormalities include:

Women are born with all the eggs they will have in their lifetime. Some researchers believe that with age, errors in the genetic material of the egg appear. Older women have a higher risk of having chromosomal abnormalities than younger women.

Because men produce new sperm throughout their lives, the father’s age does not increase the risk of chromosomal abnormalities.

Although there is no conclusive evidence that specific environmental factors cause chromosomal abnormalities, the environment may still play a role in genetic errors.