The beautiful and exotic nature of the earth in many geographical areas of the world amazes us. There are phenomena on this planet that are almost impossible to believe.

Perhaps if we hear for the first time that these wonders exist on earth, rational reasoning will not allow us to believe in their existence. In this article, we are going to go to some strange lands that are still unknown to many people.

Reading this article will give your imagination a boost; But you have to believe that none of these attractions are imaginary and they all fit nicely on the ground. 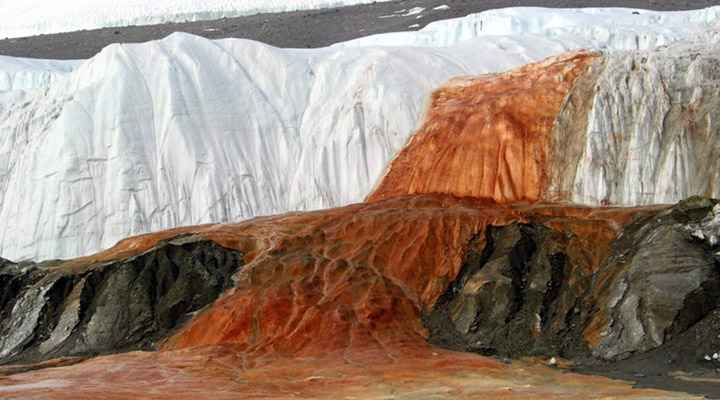 In part of the eastern part of Antarctica, there is a red waterfall that looks like a stream of blood against the whiteness of the region’s glaciers. For the first time in 1911, a geologist named Grift Taylor discovered the waterfall. He believed that the color was due to the presence of algae in the water, but this theory was never confirmed.

The cause of this red current was challenged for years until researchers at the University of Alaska Fairbanks discovered the cryptocurrency. According to this research, this red color was found to be due to the presence of oxidized iron in salt water. In fact, when iron-containing saline water reacts with oxygen, iron oxide is produced, and as a result, the red oxide turns the cascade into a blood cascade. 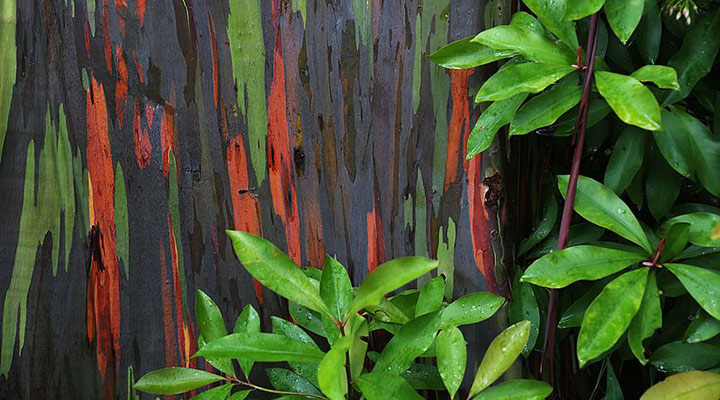 This plant shatters your whole image of tree stereotypes. The trunk of this tall tree is different from other trees and because of its colorfulness, it is known as “Rainbow Eucalyptus”. The soil of the Northern Hemisphere is home to these exotic plant species, and Guinea, Indonesia, and the island of Mindanao in the Philippines are home to some of the world’s most endangered species.

The bark of the rainbow eucalyptus tree has unique colors and you can see blue, purple, orange and tan tones on it. These trees resemble a particular style of painting in which the painter paints his brush green, tan, blue, orange, and purple instead of using brown to draw the tree trunk.

Rainbow eucalyptus is found naturally in tropical and rainforests. Of course, this tree is currently cultivated in farms in other parts of the world. The reason eucalyptus trunk is colorful is the annual shedding of old skin and the appearance of new skin on it. The bark of the tree changes color over time, which will eventually lead to multicolored trunks. 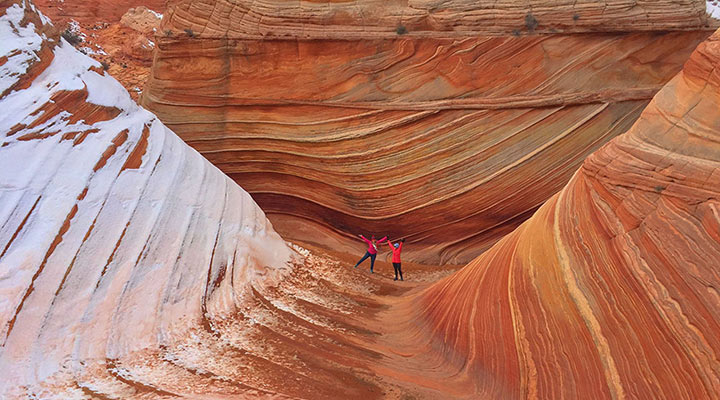 Another of the strangest and most incredible attractions in the world is located in the United States and Arizona. In the Arizona desert, you will encounter a vast ocean of curved cliffs that have spectacular waves that, like dolly paintings , keep you suspended between the boundaries of reality and dream.

The age of this wavy land is equal to the Jurassic period, and the huge winds, rains and floods have had a tremendous effect on the design of its waves. These wavy rocks have been made of sandstone over time , and colorful curved lines have appeared on its surface. This area is one of the best options for creating extraordinary and special photos. 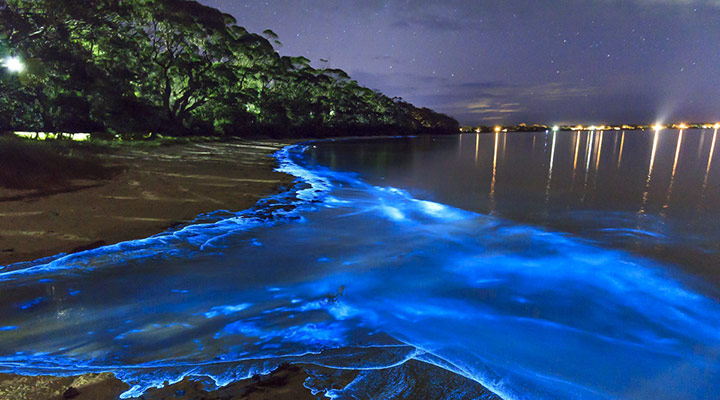 In the Maldives, there is an island called Wadho, which brings the starry night sky to the shore with every wave, and it seems that the ocean water on the shore reflects the light of the stars; But the shining blue jewels of this dream beach are tiny creatures called phytoplankton that emit bright blue neon light.
For this reason, Wado Island in the Maldives is also known as the “Sea of ​​Stars” and can be considered a remnant of paradise on earth; Paradise is the best option for romantic and romantic trips and when walking on the beach, a handful of stars mark your footprint. It goes without saying that the bright and blue beach of Hengam Island at night is an example of this dream paradise in our own Iran. 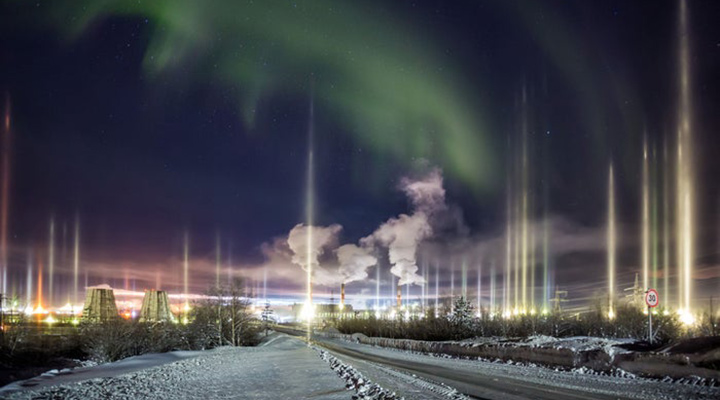 One of the strangest and most beautiful phenomena in the world takes place in the sky of Moscow. When you look at the sky, you will see columns of light that appear to have come from laser light sources planted on the ground; But these bright, delicate columns are the result of the reflection of light from the surface of ice particles in the atmosphere or near-Earth clouds.

The light reflected from the surface of the ice, in addition to the light of the moon and the sun, can also be the light of street lights; Therefore, due to the cold weather and the formation of crystalline particles in the atmosphere, the sky of Moscow is decorated with these bright columns and represents one of the most special phenomena in the world.

6. The world’s largest mirror in Bolivia 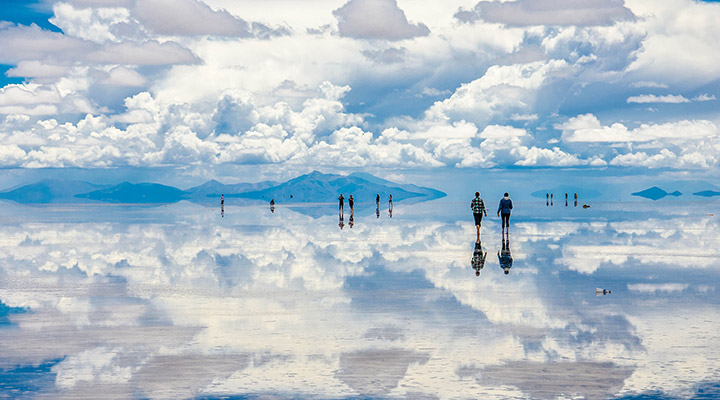 If you want to see the world’s largest mirror and the most polished area on earth, you have to travel to Bolivia. There is no water in the Bolivian salt lake called “Salar”, but when it rains, a narrow surface of smooth salt water covers the area and shows a spectacular reflection of the sky on the ground.

At this point in the world, the earth and the sky coincide, and with the help of rain and salt crystals, the largest mirror in the world with an area of ​​more than 10 square kilometers will be formed. The elegance and symmetry of the reflection of this mirror is such that they travel to this lake to adjust the satellites of the world.

Hoz Soltan Salt Lake in Qom is one of the mirror lakes in the world, which, like Lake Bolivia, shows a polished and beautiful reflection.

In Mexico, there are underground springs known as the Sanuts. These deep, natural pits are the result of the fall of limestone, which is an amazing phenomenon. The Yucatan Peninsula in Mexico is filled with Sunnah springs, and about 7,000 of these beautiful natural pits can be found in the area.

These huge and amazing cavities were filled with water, and according to the custom of the Maya, these were large water pits of the altar. The Maya believed that the fall of these limestone caves would open the door to the living world to the world of the dead.

The Sunnah has been highly revered and sacred in the Maya belief; Because in addition to believing that these pits entered the world of the dead, the Sunnahs were the source of water supply for this people during the dry season.

8. Lightning in a volcano 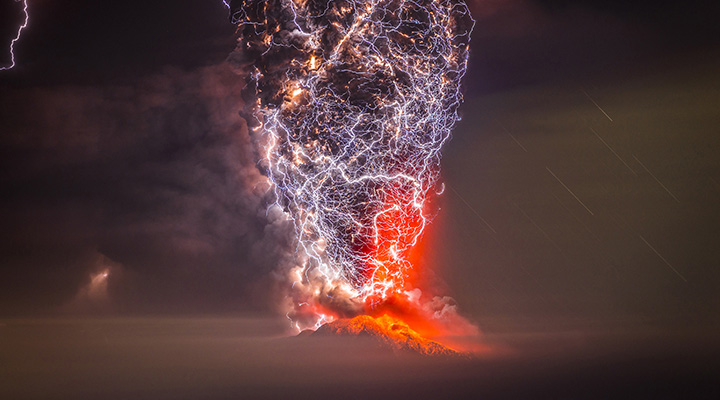 Volcanic thunderstorms or dirty storms are a unique phenomenon in the world that occurs due to lightning strikes the melt and ash coming out of the volcano, which is very impressive. During storms and thunderstorms, ice particles hit rock fragments and ash from the volcano, generating an electric charge. Water released from volcanic eruptions makes lightning stronger and more magnificent.

9. Ghosts that are trees 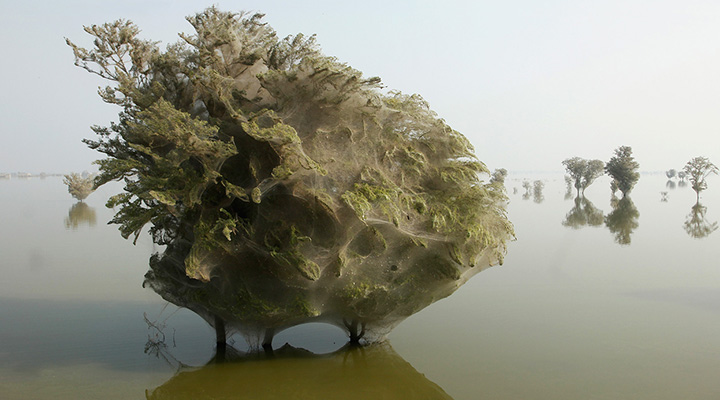 This time we have to go to Pakistan to watch one of the strangest natural phenomena. Due to the floods in one of the regions of Pakistan, spiders take refuge in trees to save their lives and cover all their foliage with their webs. The web of millions of spiders plunges these trees into a hazy membrane, making them look like ghosts. Due to the long retreat of water, this silk cocoon fits well in the foliage of the trees and we will see a special and spectacular view. 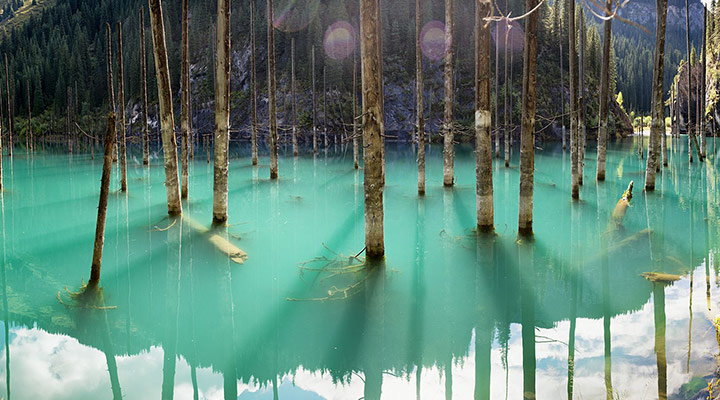 There is a spectacular blue lake in Kazakhstan that is said to have a forest hidden beneath it. This lake is called “Kindi” and is the result of an earthquake that occurred in this region in 1911. The quake caused forest cover in a 400-square-meter area of ​​Lake Kindy in a part of the Tinshan Mountains, 129 km from Almaty; Therefore, with the slipping of huge limestone and swallowed rocks of the forest into the valley, as well as long-term rainfall, the trees of this forest have sunk into the water, and finally, a lake has been born in which a large forest is hidden and the trunks of many trees are The water has come out.

In addition to the trunks of the trees protruding from the water, the beauty of this lake also makes it unique and the distinctive blue covers its surface. This color is caused by calcareous sediments.

In Mazandaran province of Iran and 50 km east of Nowshahr city, there is a similar lake, which is known as “Ghost Lake” or “Hornbeam”. Inside the hornbeam lake, trees with broken trunks have been pulled out of the water, making the surface of the lake mysterious and beautiful.

Our world and the planet we inhabit are full of wonders, and in every corner there is a phenomenon to arouse our curiosity; Phenomena that are unbelievable and break the stereotypical law of our imaginations. Undoubtedly, it will be interesting and sweet to get acquainted with these phenomena and to know about their origin.

In this article, how did we mention some of these phenomena that were briefly from our strange planet. Which other earth phenomena do you think are unique? Which cities and countries in the world are these phenomena?