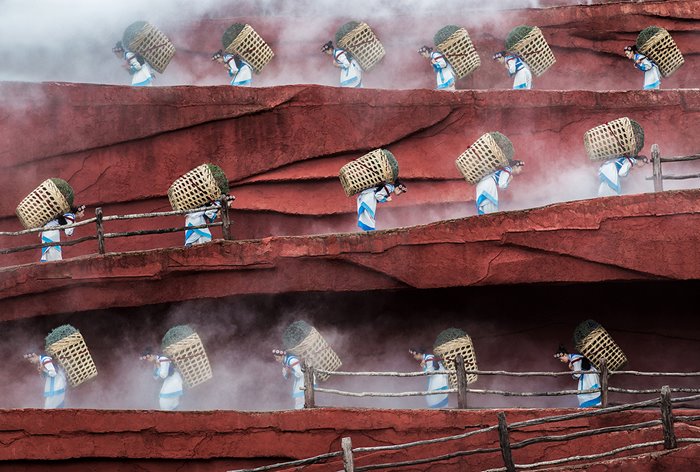 The Online Photography Magazine  “All About Photo” Announced The Winners Of The 5th “Mind’s Eye” Photography Contest.

The Competition Invites Photographers From Around The World To Submit Their Best Work For Consideration.

The winners of the 5th “Mind’s Eye” photography competition were determined by the online magazine “All About Photo.” Winners were selected from among thousands of applicants by a seven-member jury, including Julia Dean, the Los Angeles Center of Photography founder, and Laurent Bahu. Finally, a panel of 7 members selected the 40 winning and final images in this series of competitions. Was elected as the UN Environment Ambassador.

This year, compared to previous years, the judges were more attracted to beautiful and relaxing images than violent and disturbing images. In this regard, in the official press release of this competition, it was announced that to escape from the terrible events happening in the world, an unconscious need and desire for soothing images has arisen in all human beings.

The winning and accepted images at this year’s festival include everything from journalism to abstract art, with a fascinating focus on the odd.

All kinds of photos, from digital to analog and alternative processes and beyond, were not an obstacle to entering this competition, Only with the condition that all images must be original. Participation in this competition is open to all people over 18 years of age, Both professional and amateur photographers.

In this competition, 4 of the top 5 are women. Many photos were submitted in color for the contest, But most of the winning images are black and white.

The first prize was awarded to  Monica Denon  (a photographer from the United States of America). The photographer’s image shows a young boy crossing a river in Burma, and this photo is included in a series called “Songs from the River: Portraits from Burma.”

First place for the photographer of the year 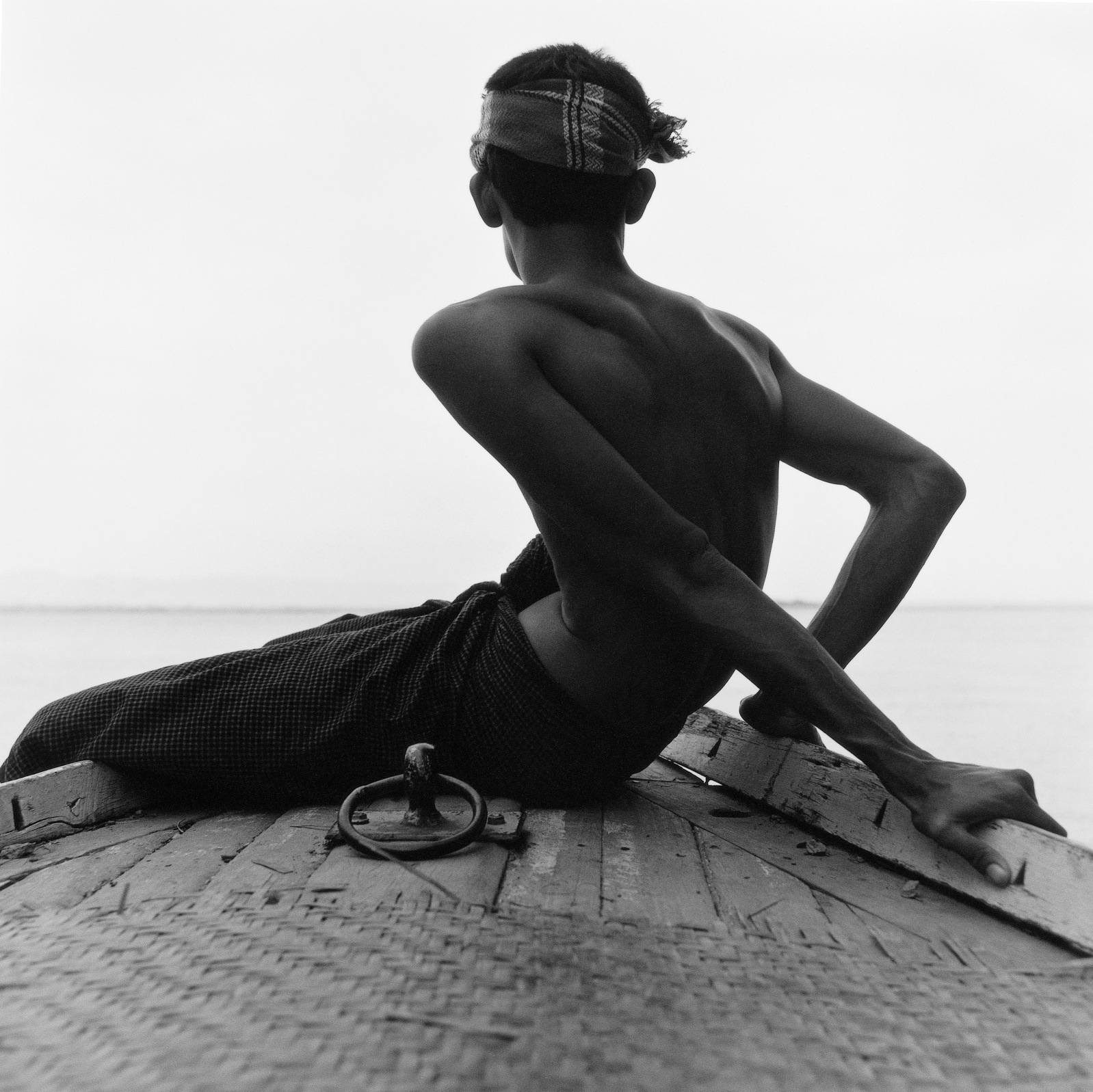 The top prize and first place for the photographer of the year were awarded to Monica Denvan for this fantastic photo. This photo depicts a young boy crossing a river in Myanmar (formerly Burma). Myanmar is a country in Southeast Asia that was occupied by the British in 1824 and became a British colony under the annexation of the Indian government. This image of a young Myanmar man was added to a photo collection titled “Songs of the River; Portraits from Burma.

The second place for the photographer of the year 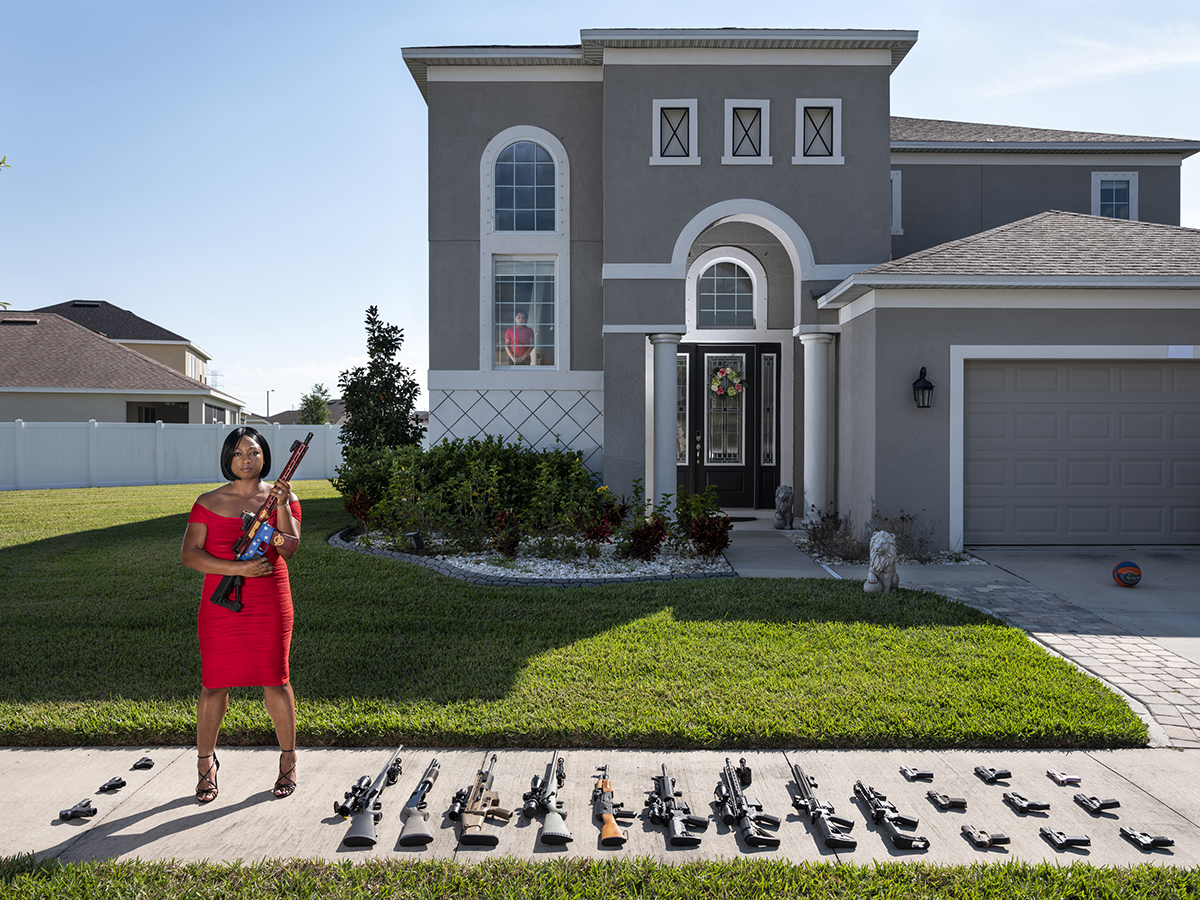 In the United States of America, there are more guns than people. For every 100 American citizens, 120 pistols are registered, and this statistic only belongs to legally registered firearms. In the second place, there is an image in which a woman from Florida proudly displays her gun. Commenting on this photo, the photographer says: “As a European, I searched to find out if it is a common practice for American individuals or families to own many guns. “To answer this question, I traveled to the United States of America and met with a group of 45 families or single people of all races and creeds to create a collection of photographs that relate to Americans and their weapons.”

Third place for the photographer of the year 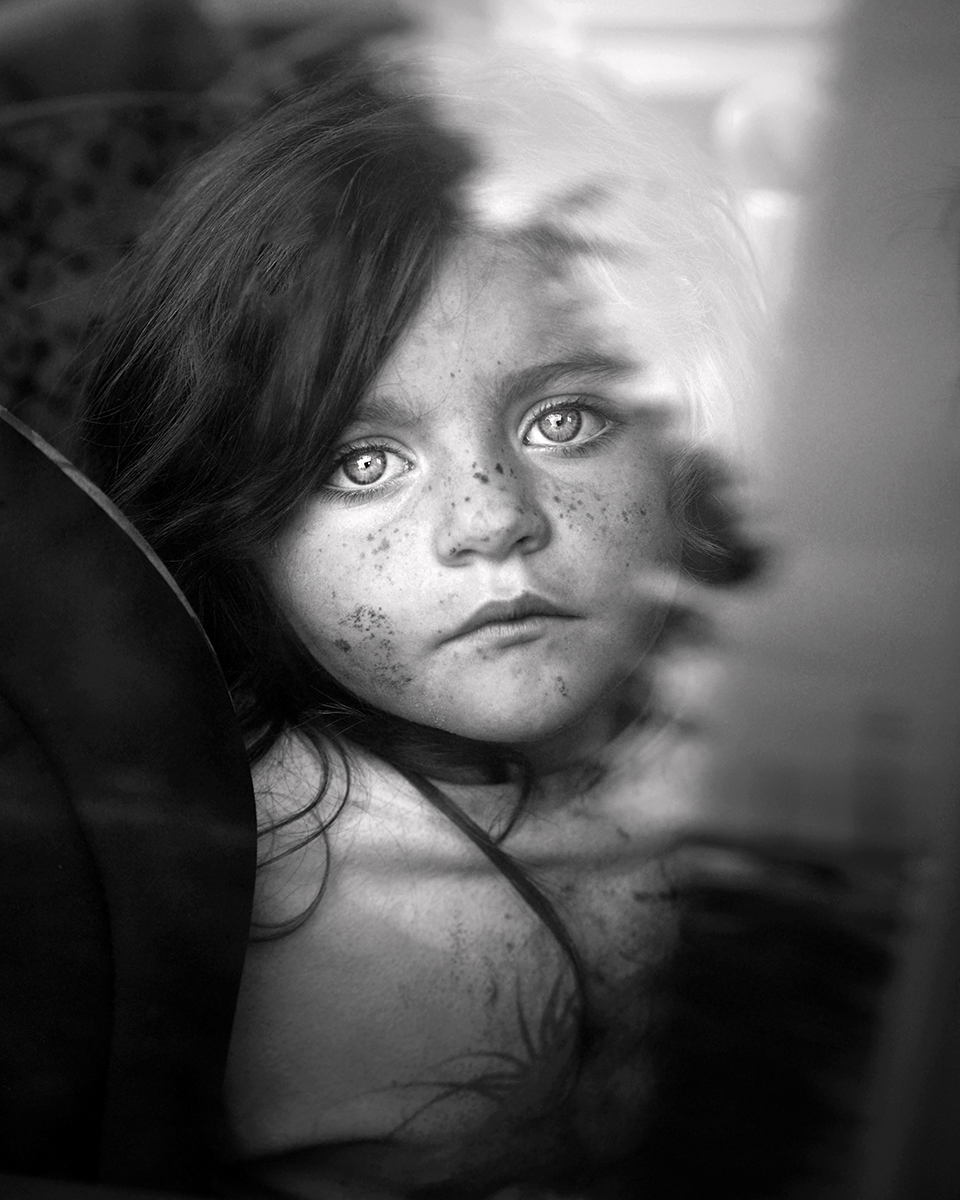 A little traveling Irish girl looks out of her family car before heading home to her family’s illegal camp.

The fourth place in the photographer of the year 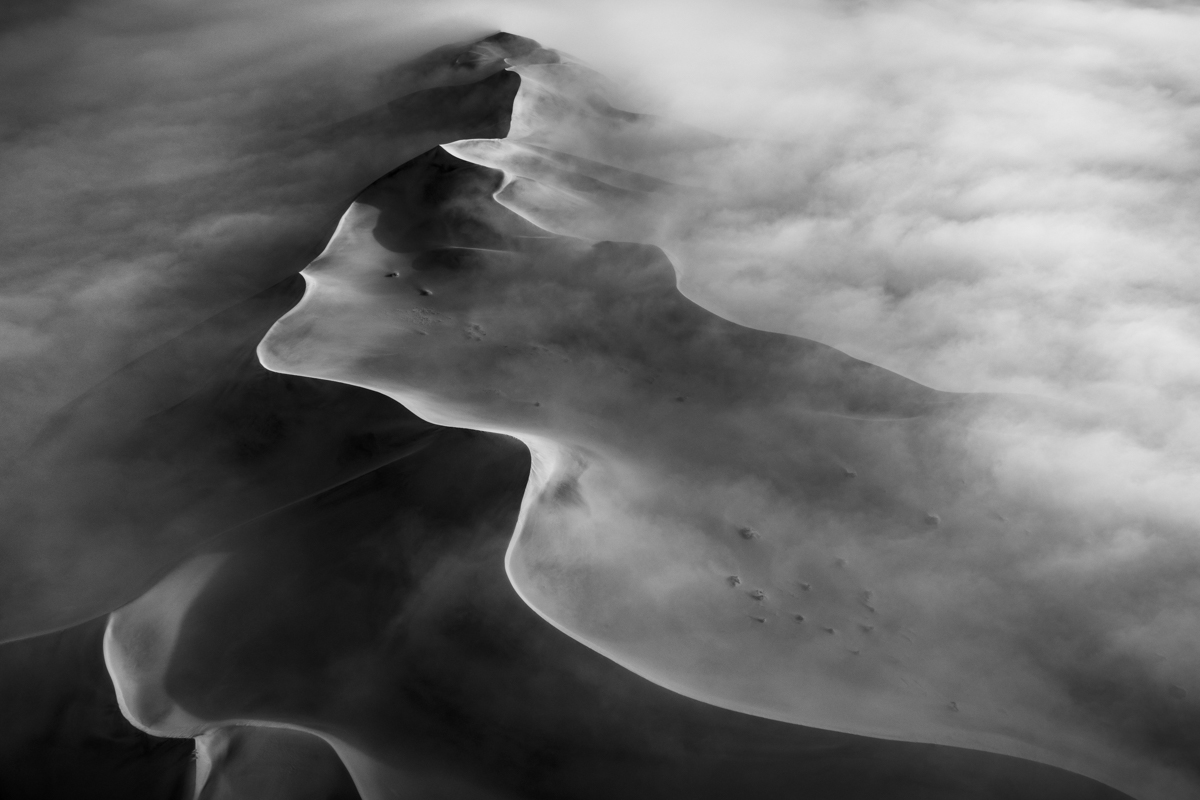 The Namib Desert is a dry and desolate area with little vegetation. This area is usually covered with sand. However, there is more to life in this desert than most people imagine. In the Namib region, the existence of this beauty and life is thanks to the fantastic miracle of fog. The clouds that flow from the Atlantic Ocean bring moisture with them, which makes the world’s animals and plants to be preserved in this beautiful and harsh landscape.

Fifth place in the photographer of the year 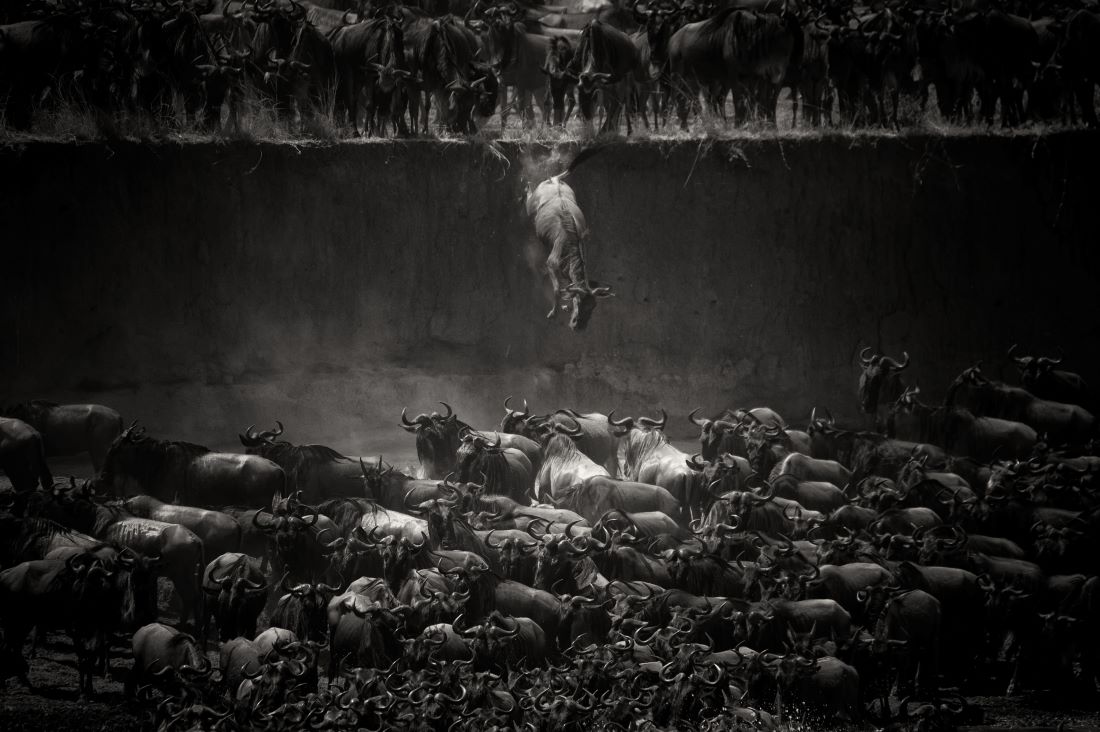 This photo shows the annual wildebeest migration in the Northern Serengeti (Tanzania), and the wildebeest didn’t wait his turn and jumped over other wildebeests. 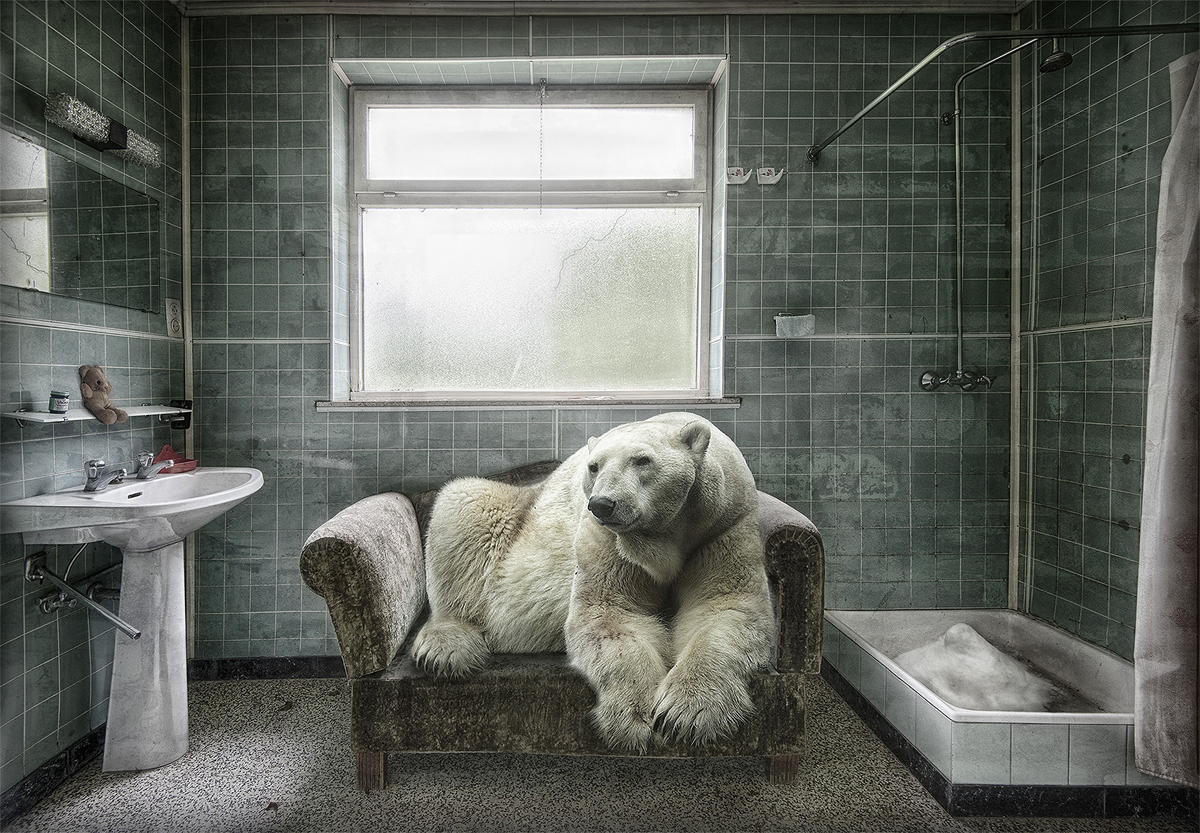 Climate change and loss of sea ice habitat is the biggest threat to polar bears; every day, more polar bears are forced to leave their ice habitat. For this reason, spreading awareness about the natural and severe threat of climate change is necessary. However, it does not make sense to consider your home or bathroom as a polar bear sanctuary. 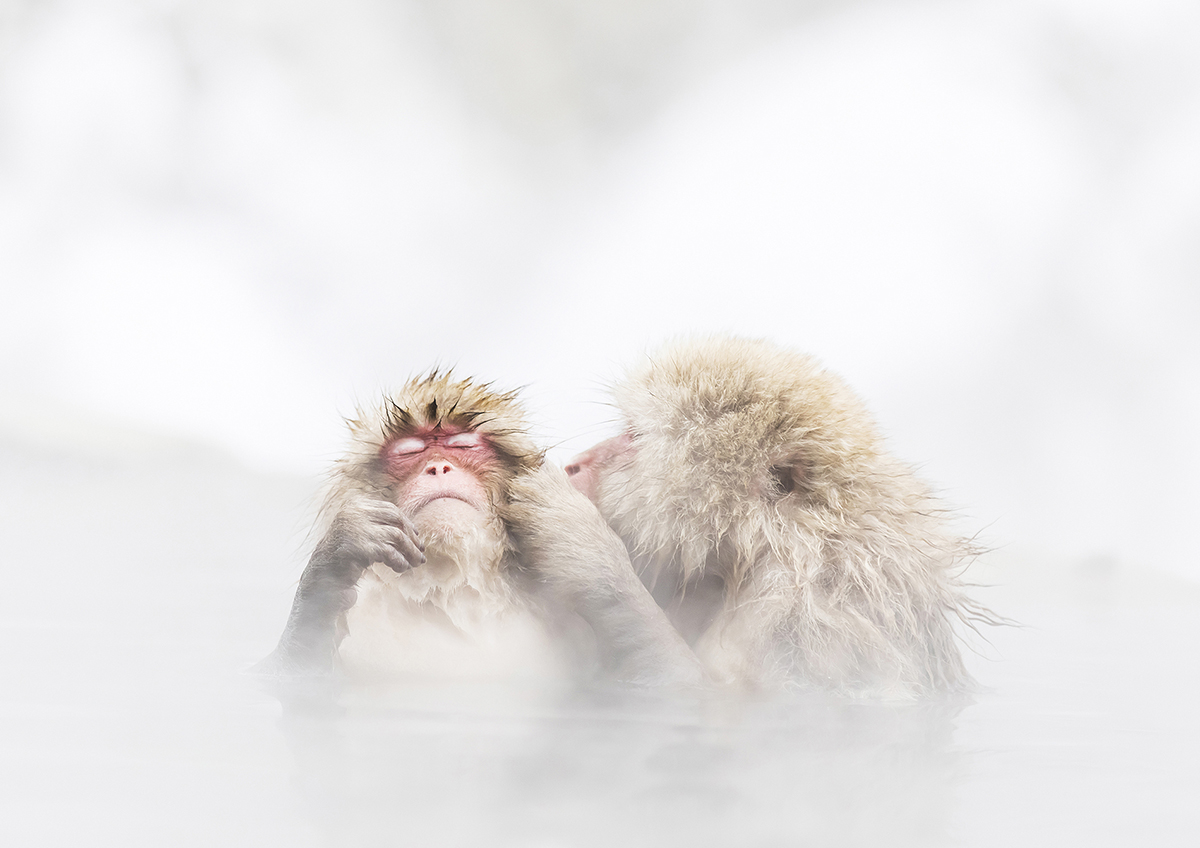 A monkey entering a Japanese hot spring expresses various expressions like a human. 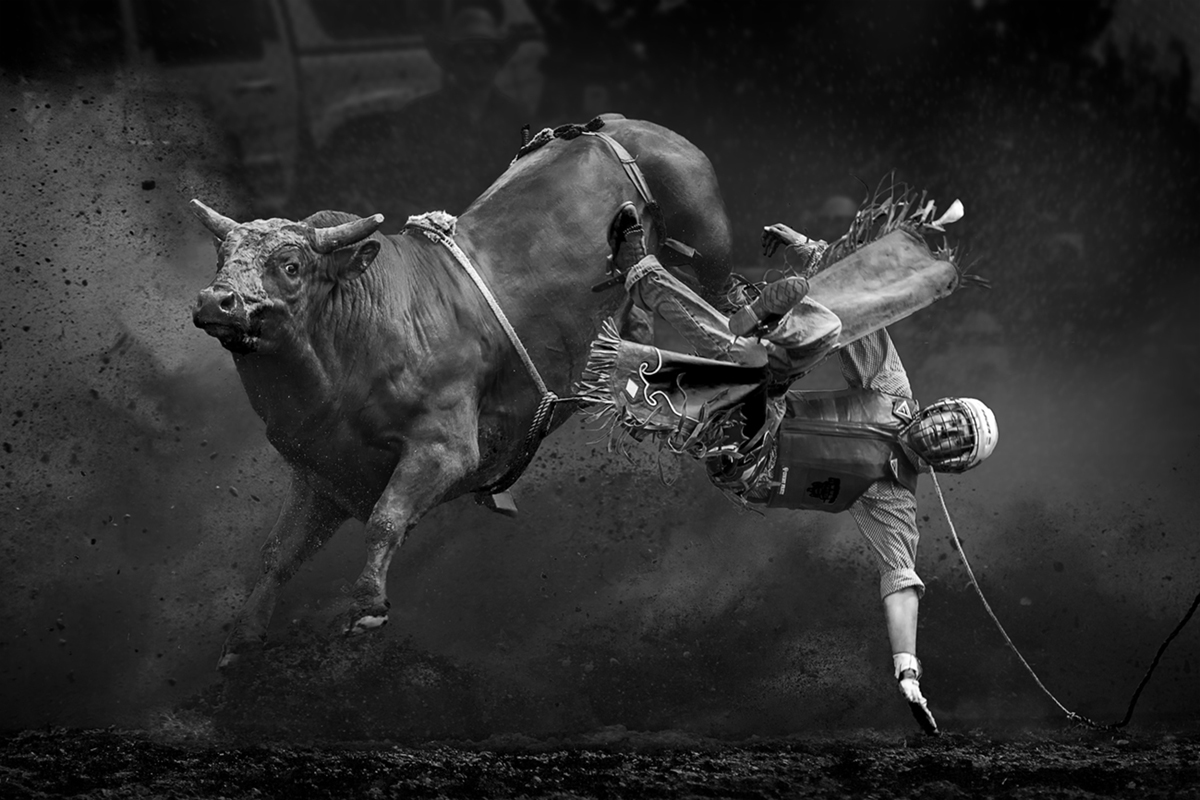 This photo was taken at the rodeo event held in Taralga, Australia. The image captures the moment a man falls from a bull and is very similar to one of the Renaissance paintings. 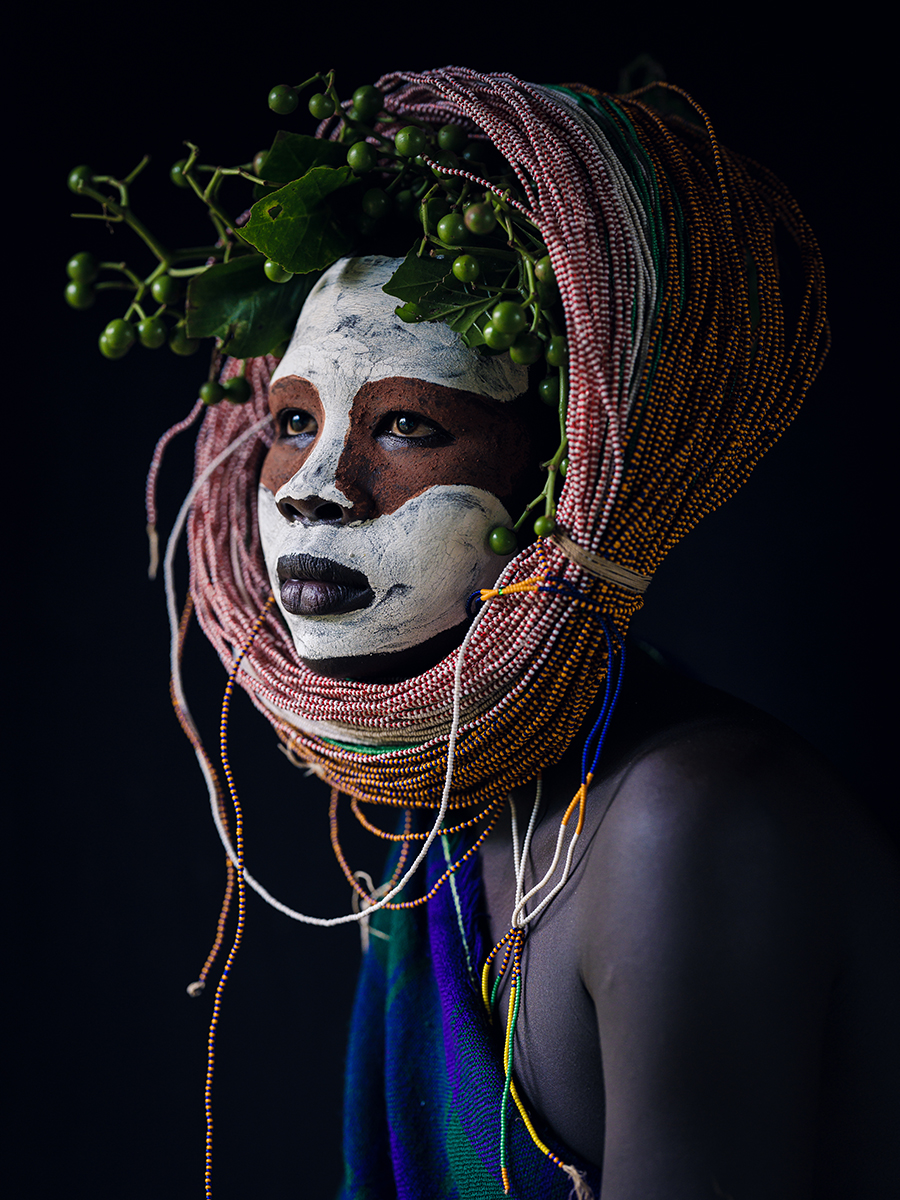 This picture was taken during a trip to the Suri tribe in the Omo Valley in southern Ethiopia. The photo model was not wearing any clothes, and her image was recorded simply as it was. No artificial light is used in this image, and the photo was taken inside a dark tent with light entering from the entrance. In the Omo valley, eight tribes with a population of about twenty thousand people live, and the attack on cattle herds is a significant issue among these tribes. The art of making up with flowers and colors is popular among the members of the Syrian tribe, while the war between this tribe and other tribes over cattle is very violent and deadly. 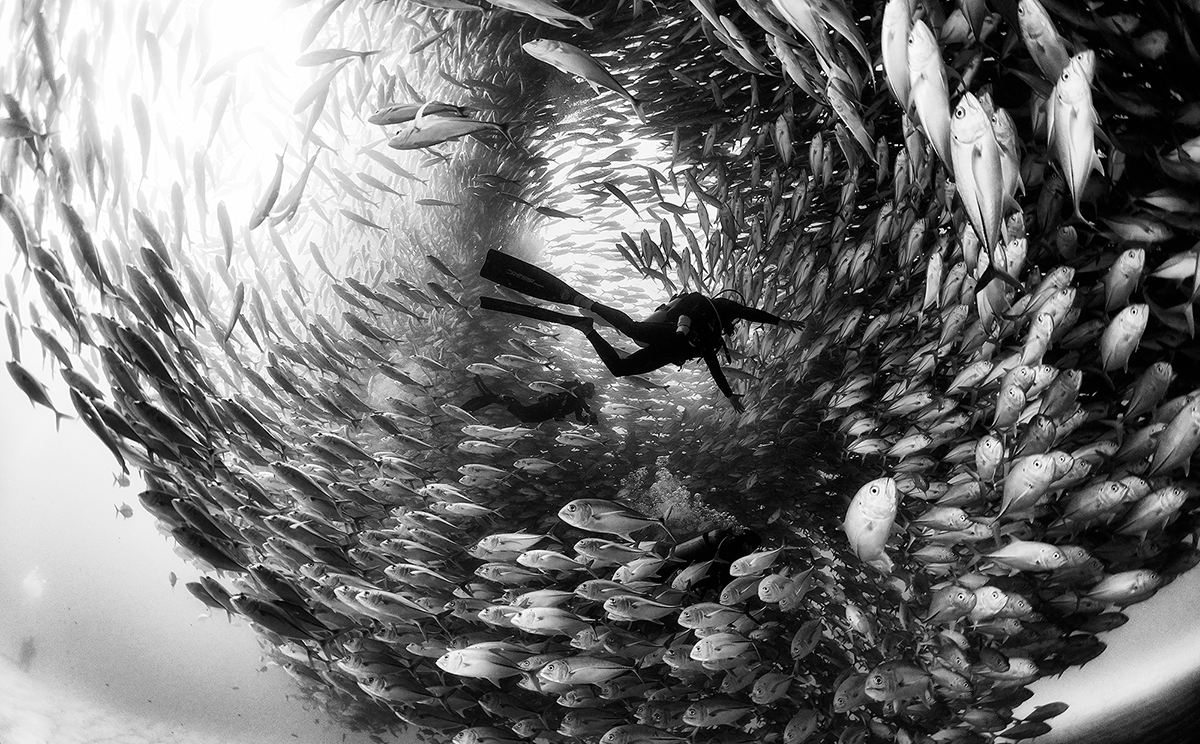 This picture was taken from a diving school in Cabo Palmo, Mexico. 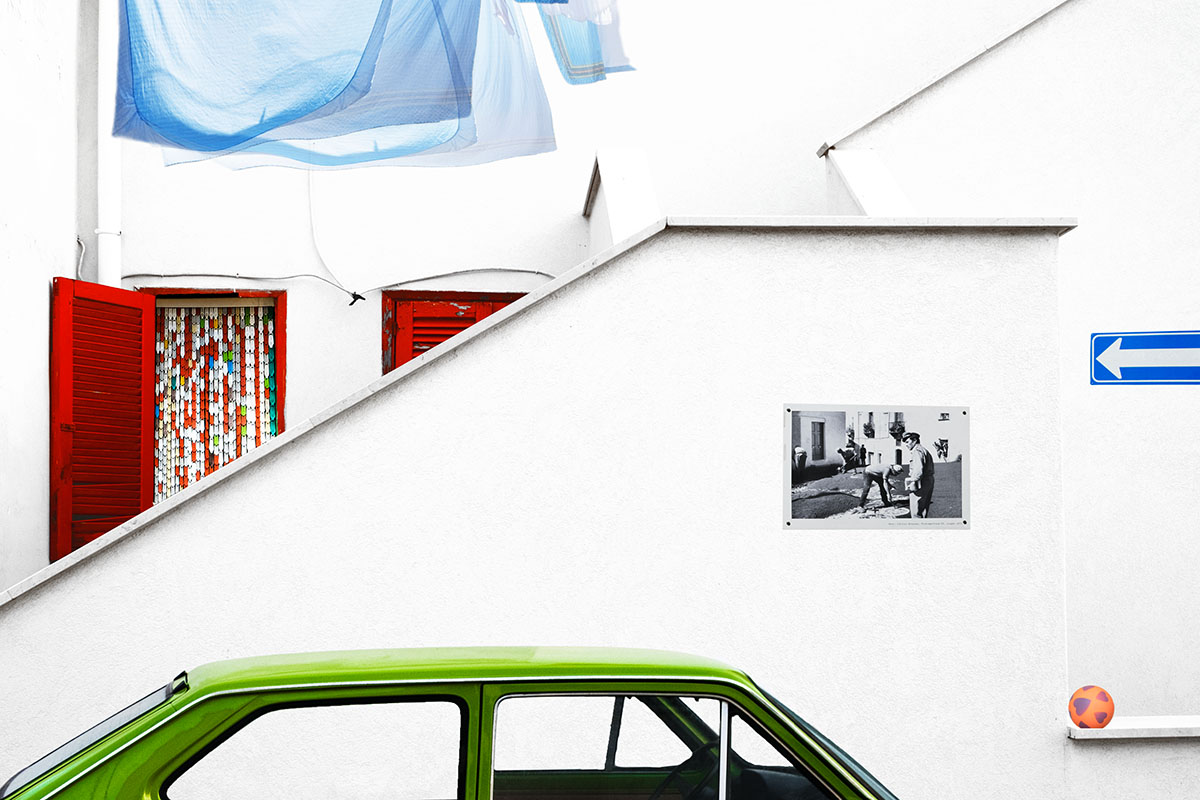 The photographer says in the explanation of this picture:

Sometimes a photo alone cannot convey those special moments’ emotions, memories, and moods, and you need more. For example, the image can be scanned to get the right photo size to achieve creativity. This photo is intended as a small tribute to a great master. Henri Cartier-Bresson knew how to always show me reality with new eyes So that it is more humane, artistic, and poetic. His photographs, taken between 1950 and 1970 in Basilicata – my homeland – as well as around the world, changed my perspective on everything, made an extraordinary impression on me, and became my great source of inspiration.

Henri Cartier-Bresson was a French photographer who played a crucial role in inventing and expanding photojournalism (news photography) and instant and street photography. With his famous Leica 35 mm camera, he traveled to the far corners of the world and patiently and almost imperceptibly recorded the scenes. His unique ability to capture the “decisive moment” of his precise eye for scene design, his unique way of working, and his literary expression in the theory and practice of photography made him a legendary figure among his contemporary photojournalists.

Cartier’s artwork and style have had a lasting and unattainable impact. In the global photo market, his influence is well evident. His single photos and photo stories adorned the world’s most prestigious magazines for three decades, and different versions of his photographs were displayed on the walls of American and European museums. He was also one of the founders of Magnum Photo Agency in New York and Paris. 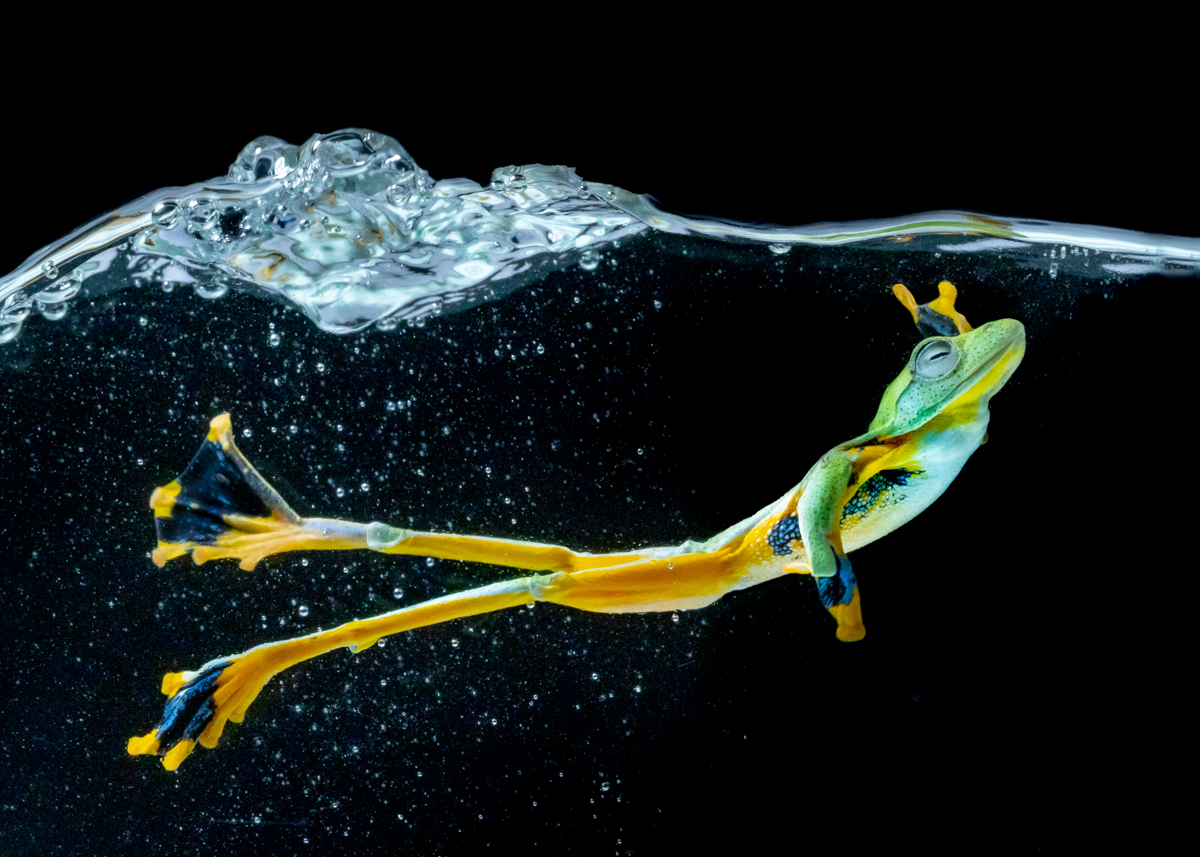 Wallace’s flying frog, or Abah River flying frog, is a bush frog in Malaysia and western Indonesia. This frog got its name from the biologist named Alfred Wallace, who first identified it. Wallace is known for its large size, bright colors, and engaging behavior. This photo was taken of one of these frogs while swimming; When this moss frog shows off its beautiful long legs by fully stretching its body. The body length of Wallace’s bird frog is between 8 and 10 cm, and males are smaller than females. The arms and legs of this frog are very long, and its fingers and toes have beautiful orange curtains. The skin between the hands and feet of this frog is also stretched, and it can fly between the trees with the help of it and the web between its fingers. 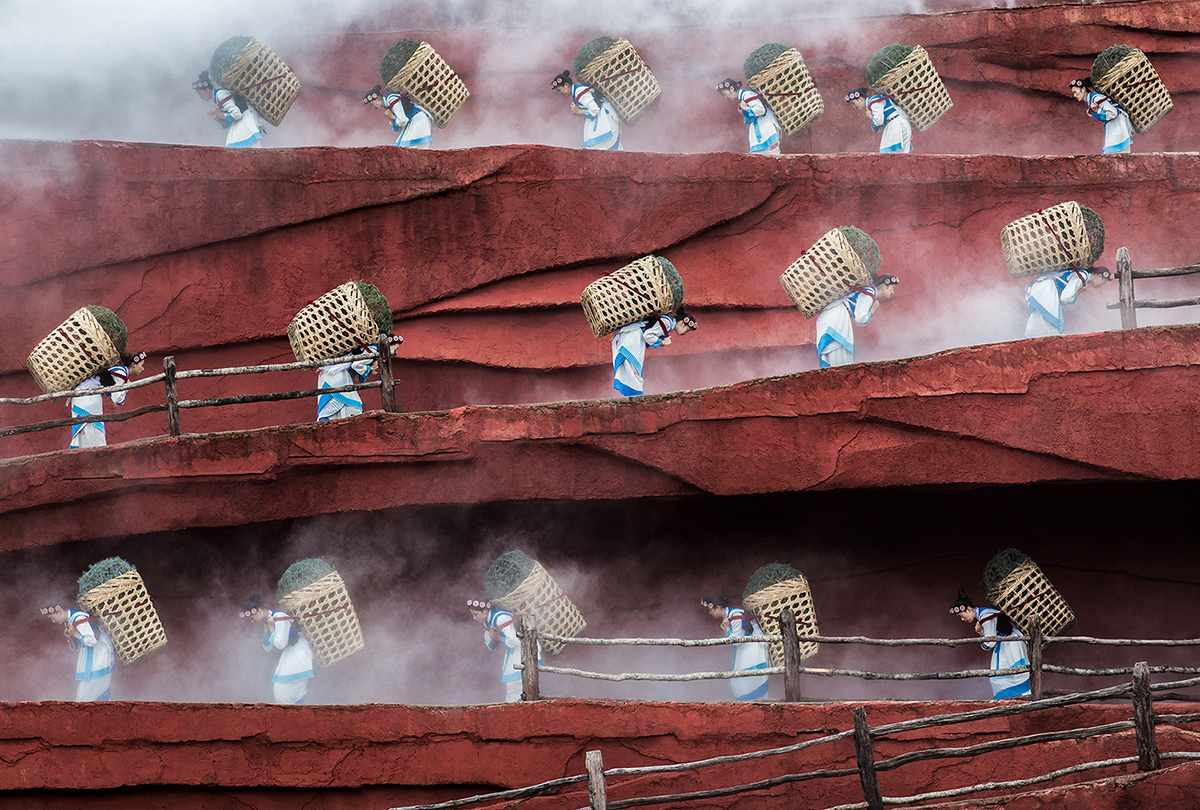 Lijiang Harvest is a cultural show showcasing the traditions and lifestyles of the region’s local Naxi, Yi, and Bai ethnic groups. This is the second foreign production of the famous film director Zhang Yimou, who will start his first outdoor performance at the foot of the Dragon Snow Jade Mountain, at a distance of about 3500 meters from the sea level. The performance stage, especially the mountain, was designed as the best backdrop for the show, and more than 500 people from ten ethnic groups participated.