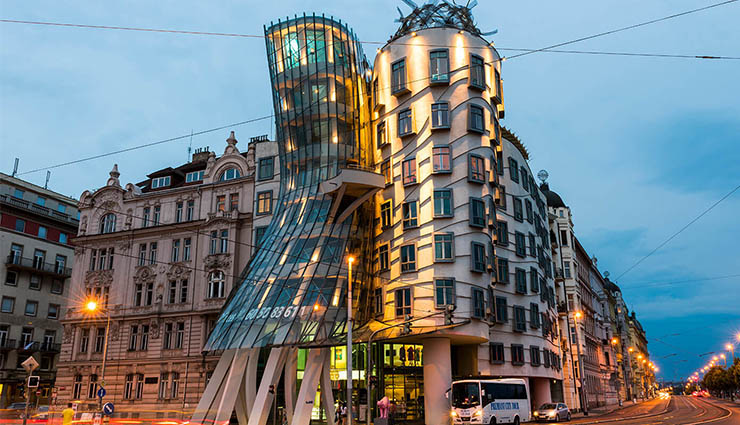 How many of the strangest architectural structures in the world do you know? For example, buildings that are designed to look like specific objects or have a specific and different shape.

Architectural Structures are one of the most important tourist attractions around the world; Especially if they have a special feature that distinguishes them from other buildings around them, such as a large tower in the shape of a teapot, a dance house or even a temple in the shape of a lotus flower!

Below is a list of some examples of these Architectural Structures.

If you are interested in strange and different Architectural Structures, you may have heard the name of this building. In the following, you will see some of the strangest architectural structures in the world that have been built in different cities of the world with different purposes. 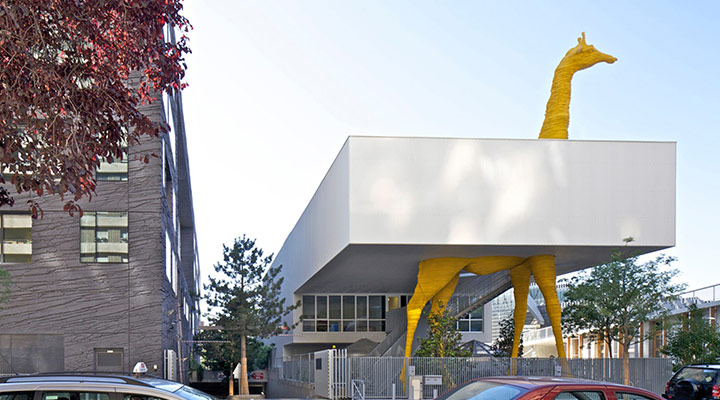 The building was designed by Hondelatte Laporte Architects and completed in 2012. This building is a child care center. Animal sculptures have been used for the special design of this building. The most prominent of these is a large giraffe that appears to be passing through the building. According to the designer of this building, the idea of ​​using the sculptures was inspired by the creativity and imagination of the children who come to this center. 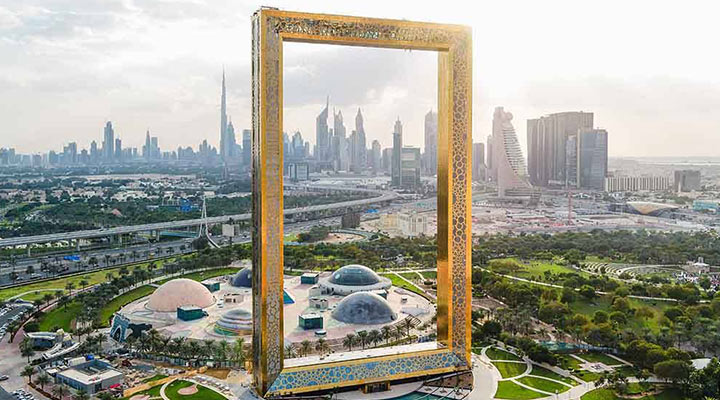 Dubai Frame with dimensions of 150 by 105 meters is the largest photo frame in the world. This symbolic building was designed by Fernando Donis. He believed that placing existing monuments in a suitable frame was better than building a new one, and presented his idea as a plan to mark the past, present and future of the city. 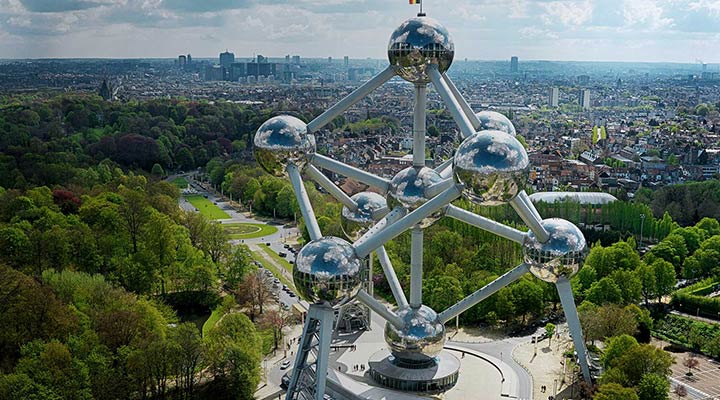 The Atomium is inspired by the physical structure of the atom, based on a design by engineer Andre Waterkin and designed by Andre Pollack and Jean Pollack. Atomium was one of the plans made for the 1958 Brussels International Exhibition. This structure was chosen to show the desire of human society for the developments of the atomic age; A structure with 9 interconnected balls that have stainless steel cladding and 6 of them are available to visitors.

This outstanding engineering work has distinctive features; For example, the fastest elevator with a speed of 5 meters per second is located in this building. These features have led to the building still functioning as a museum, contrary to initial planning (it was originally scheduled to run until the end of the exhibition and only 6 months). 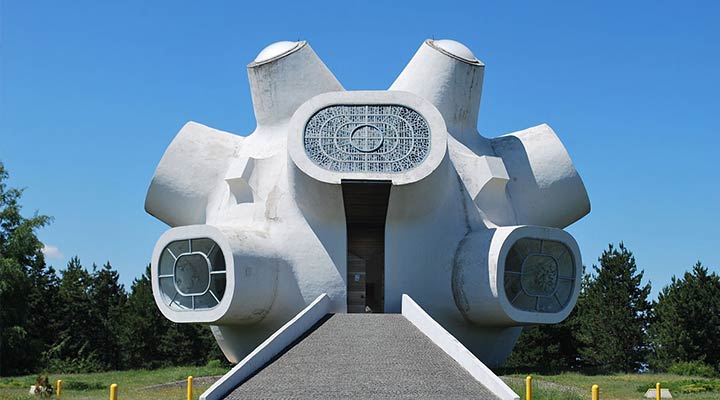 The Ilinden Building is a historic building designed by two artists, Jordan Grabulowski and Iskra Grabulovska, and was built in 1974. The monument is actually a memorial to the fighters and revolutionaries who took part in the 1903 Ilinden Uprising, as well as to the patriotic guerrillas who rose up for Macedonian national independence between 1941 and 1943. In addition, Nicola Karf, President of the Autonomous Republic of Krushevo, is buried inside the building. There is also a sardis of Toše Proeski, the famous singer of this land, in this building. 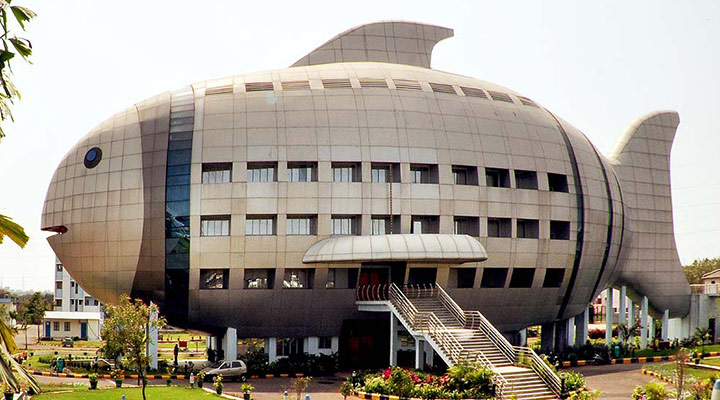 Designed in the shape of a giant fish and perfectly suited to its use, the building is actually a branch of the International Fisheries Development Organization. This office building is located near Hyderabad, India and was built in 2012. The design of this building is inspired by the “golden fish” structure of Barcelona, ​​designed by Frank Gray. 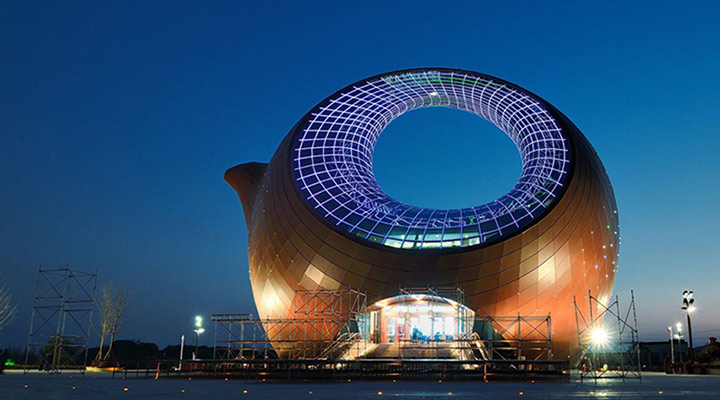 Designed in the shape of a giant rotating teapot, the building is actually a Chinese exhibition designed to make visitors more familiar with local customs. The rotating structure of this building has special facilities: a small air train, a ferris wheel and a water park. Enjoying these facilities, along with visiting the exhibition, is a good incentive to go to this complex. 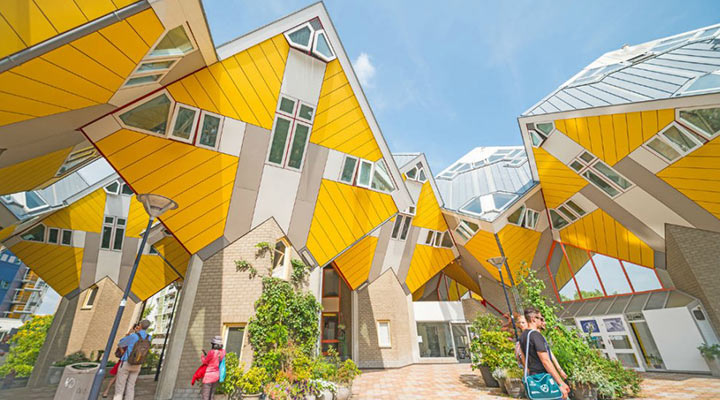 Architect Behnam Piet Blom designed these houses. Cube houses are actually a set of houses with a diagonal design whose design idea is based on the idea of ​​optimizing the interior space and reducing the external surface of the building. Unlike conventional houses, these houses are designed at 45 degree angles and are located on hexagonal columns. 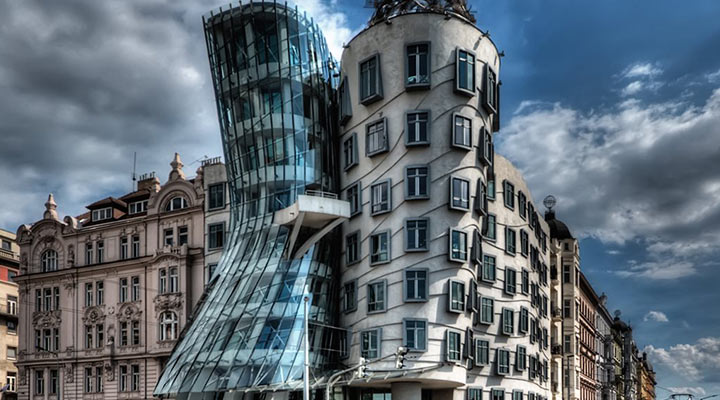 The design of the dance house began in 1992. This design took four years and was finalized in 1996. The building is actually one of the offices of the international and Dutch company called Nationale-Nederlanden, which operates in the field of insurance. The construction of this building had many opponents with this destructive design, which was done in the style of “New Baroque”.

The reason for the opposition was that it disrupted the architectural order of Prague. Common architectural styles in Prague were Gothic, Classical Baroque, and Art Nouveau architecture. 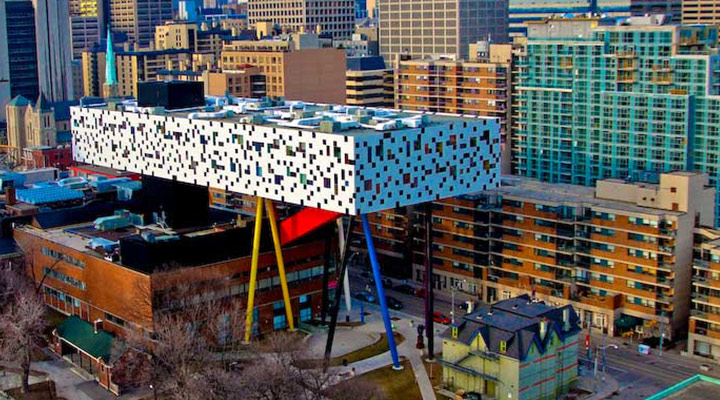 The Sharp Design Center is part of the Ontario University of the Arts and Design (OCAD). Robbie / Young + Wright and Alsop Architects worked together to design the building. This building is a rectangular structure that is installed at a height of 26 meters and 12 steel columns have been used to restrain it. The structure is actually built on top of the old university building, which is connected by an elevator and stairs. 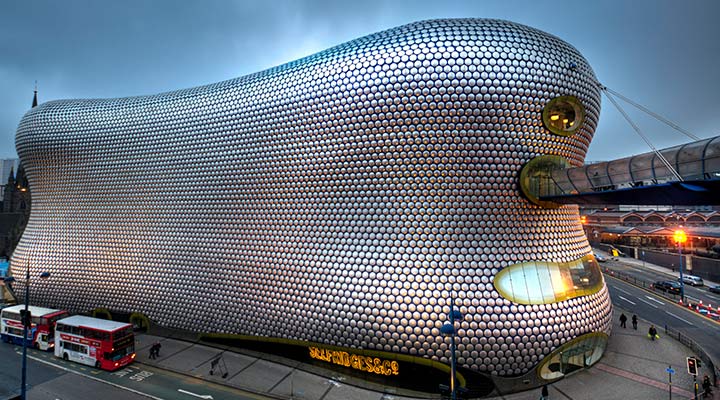 Future Systems Architecture Company has designed this building. The Selfridges Building is a landmark in Birmingham. This building is a metal structure that has a concrete cover and aluminum plates cover its exterior. The construction project of this complex was completed in 2003. In addition to playing a special role in the renovation of Birmingham, the building has become an architectural symbol. 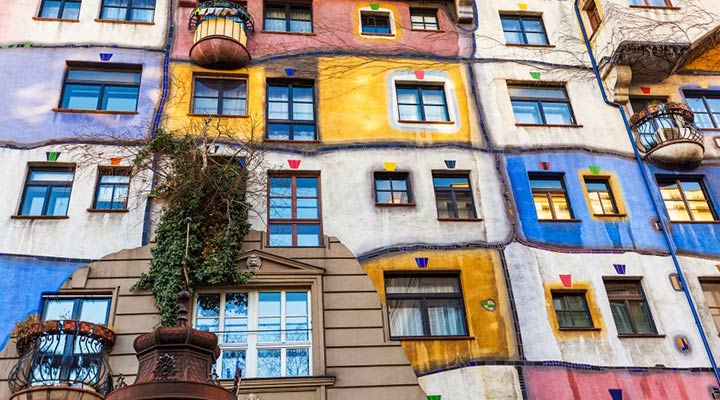 The Hundertwasserhaus in Vienna, Austria , was designed in the 1980s with colorful walls, irregular lines and a cascade of flowers and plants . It was designed by the Austrian artist Friedrich Hendertwasser.

This house includes 53 apartments, 4 offices, 16 private terraces and 3 public terraces. It has a total of 250 trees and green space. This house is one of the most visited buildings in Vienna and part of the Austrian cultural heritage. 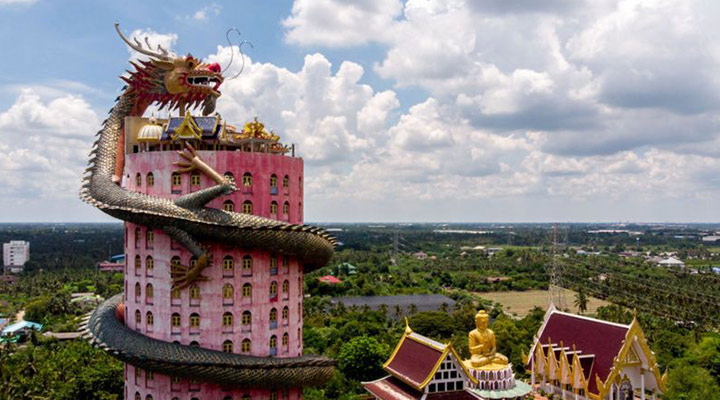 This Buddhist temple is located 40 km west of Bangkok. It is known for its 17-story cylindrical structure and the presence of a large red and green dragon statue that circles around the cylinder. Inside this dragon is a staircase facing the roof of the temple. In addition to the dragon, the complex houses a large statue of Buddha and several other religious statues.

Wat Samphran Temple, despite its strange and different appearance, is not a very popular attraction. For this reason, it has a calm and spiritual environment.

The Lotus Temple is one of eight Baha’i temples around the world that were completed in 1986. This structure is one of the most beautiful and strange architectural structures in the world, which was designed by Iranian architect Behnam Fariborz Sehba . The lotus flower in India is a symbol of worship and religion. The creative architecture of this temple has received several awards. The temple building consists of 28 petals made of white concrete and has a marble cover. 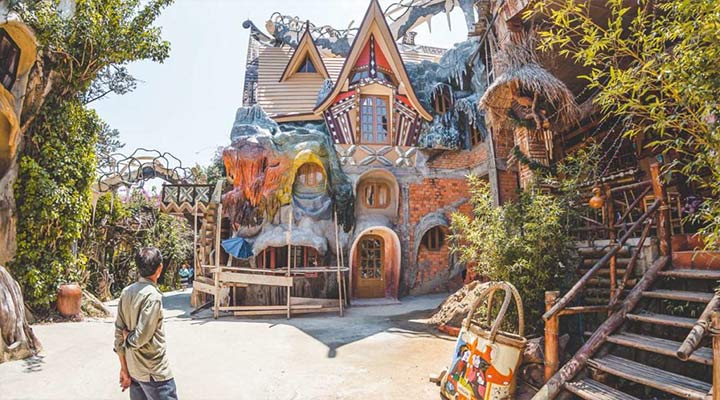 The Hang Nga Hotel is known as the “Crazy House”; Inspired by natural structures, the building is compared to works by artists such as Salvador Dali and Anthony Gaud.. The overall design of this house is similar to a large tree, and parts of the building, which are designed in the form of natural elements such as mushrooms, cobwebs and even animals, form different parts of it. The guest house was originally built as a personal project, but opened its doors to the public in 1990. 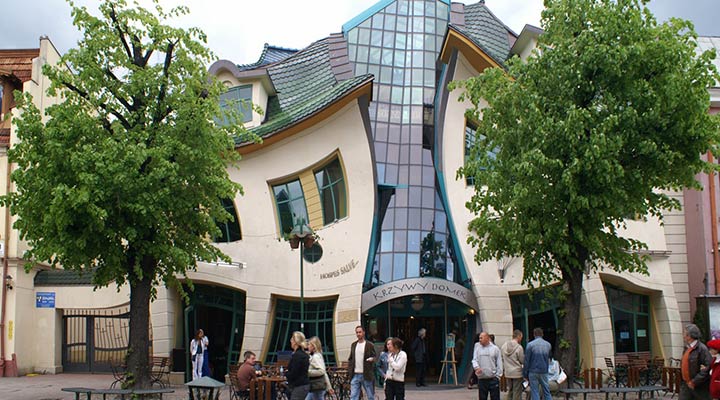 Krzywy Domek, contrary to its unusual name, is a shopping mall. Part of it includes offices and is located on one of the main streets of the city. This house was built in 2004 and its area is about 4,000 square meters. The design of this house is inspired by the paintings of a Polish illustrator. Some of the most important Polish international companies have offices in this complex. 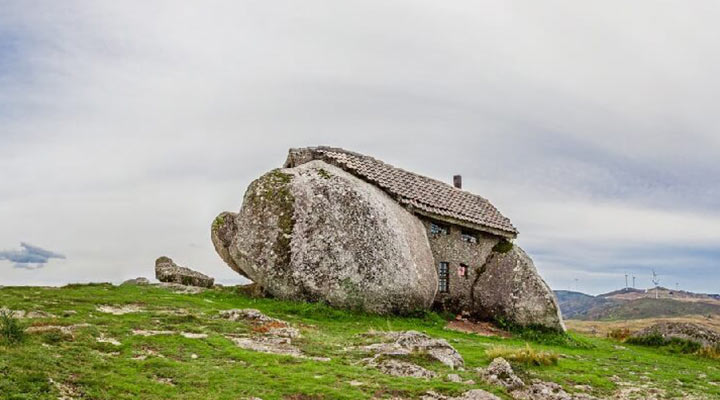 The stone house (Casa do Penedo) is located between two large boulders in the non-urban areas of Portugal. There used to be a lot of controversy about the images and people thought it was a Photoshop trick! This house is inspired by the Flintstones animated series. The house is made of four large stone slabs that form the foundation, walls and roof of the house. Construction began in 1972 and took two years. Originally used as summer houses, it has now been turned into a small museum of photographs and relics of its history. 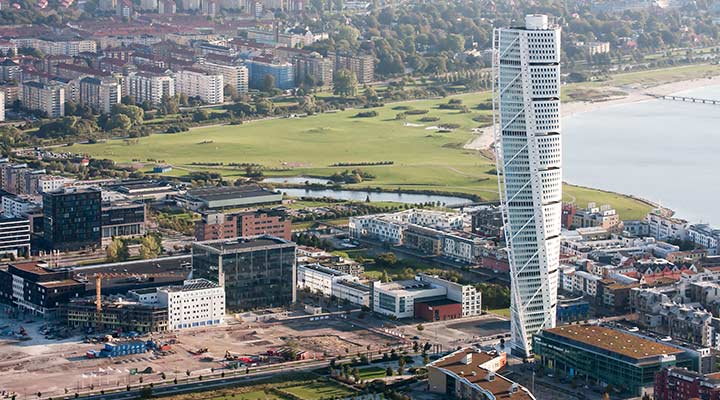 The tower is the tallest residential building in Sweden and rotates 90 degrees from bottom to top. It is the tallest building in Scandinavia and is known as the world’s first twin tower. Opened in 2005, the tower is 190 meters high and has 54 floors and 147 apartments. There is a viewing platform on the 49th floor of the tower. Since 2009, public access to some floors of the tower (according to a specific schedule) has been provided. 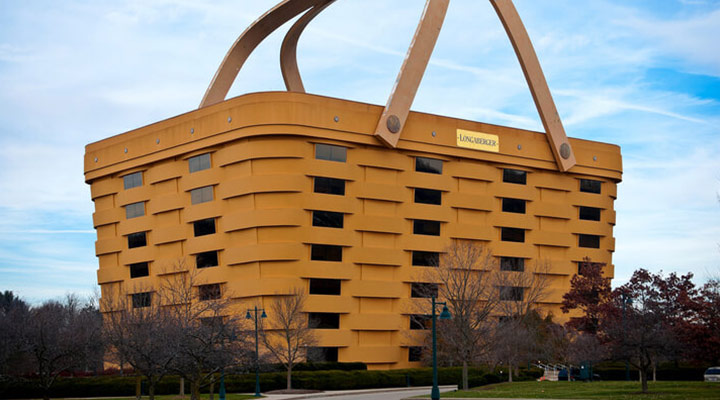 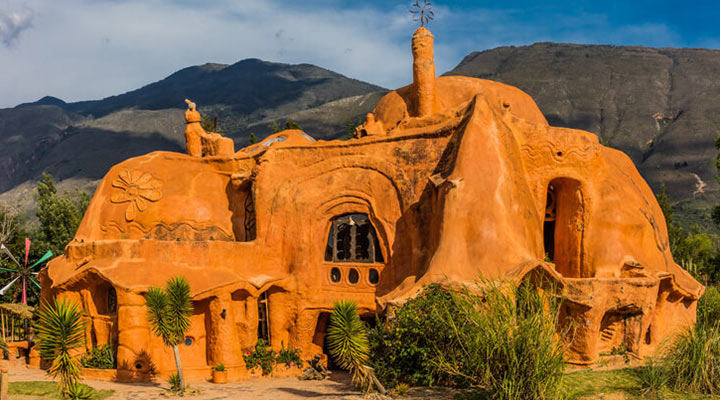 The pottery house (Casa Terracota) is made by hand with pottery baked in the sun and is known as the largest piece of pottery in the world. This house is located in a village called Villa de Leyva. The 500 square meter pottery house is made entirely of pottery and has been baked and strengthened by the sun. It is a two-story house, and most of its furnishings (beds, tables, chairs, and even utensils) are made of pottery from the same area; Other equipment is made from recycled materials. 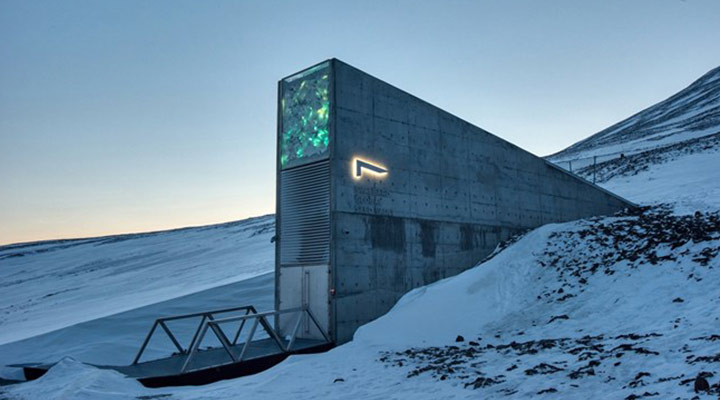 Designed for the day, the Svalbard Universal Seed Treasury is equipped with explosion-proof doors, air locks and motion sensors to protect the millions of different seeds that may one day come to us in times of global catastrophe. The treasury was officially opened in 2008. It is also known as the seed treasury on the Day of Judgment; Treasury and warehouse located on remote islands 100 km from the North Pole. 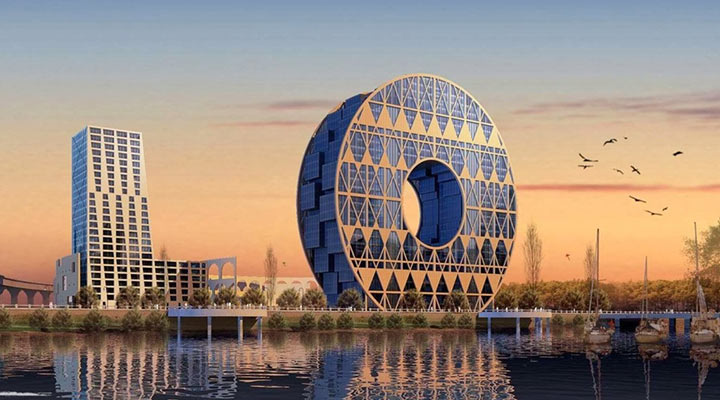 The building is located on the shores of the Pearl River and is inspired by an ancient Chinese coin. The Guangzhou Circle is the headquarters of a Chinese trading company engaged in the international trade of plastic raw materials. It was designed by Italian architect Joseph Pascal. Its total height is 138 meters and includes 33 floors. In 2014, c. ان. Ann put this building on the list of ten most attractive buildings in the world.

The strangest architectural structures in the world have special and unique features that have attracted the attention of tourists and architecture lovers. In your opinion, is there a building in Iran that has unique features and can find a place in this list? If you know of such a structure in Iran, introduce it in the “Submit a comment” section.