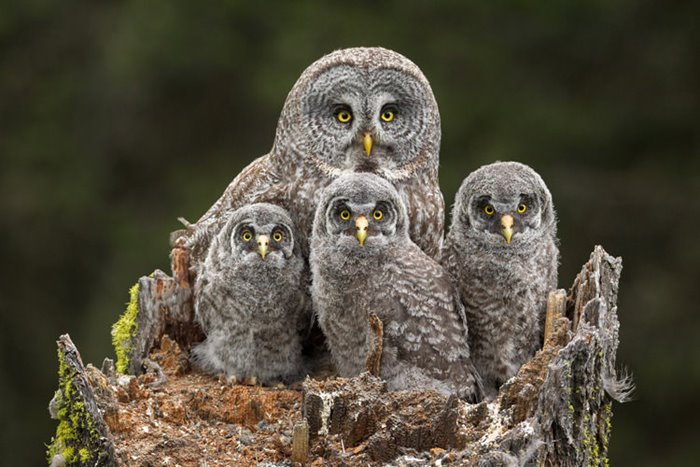 The Wildlife Photography Competition Has Been Running For 54 Years. This Competition Was Established By The Museum Of Natural History With The Aim Of Displaying The Best Photography Of Nature.

As part of the Lumix People’s Choice Contest, the Natural History Museum has released a list of 25 of the best photos that have received more than 45,000 votes from professional and amateur photographers worldwide.

Stay with Shutter in this article to review this list of 25 together with explanations about each photo. 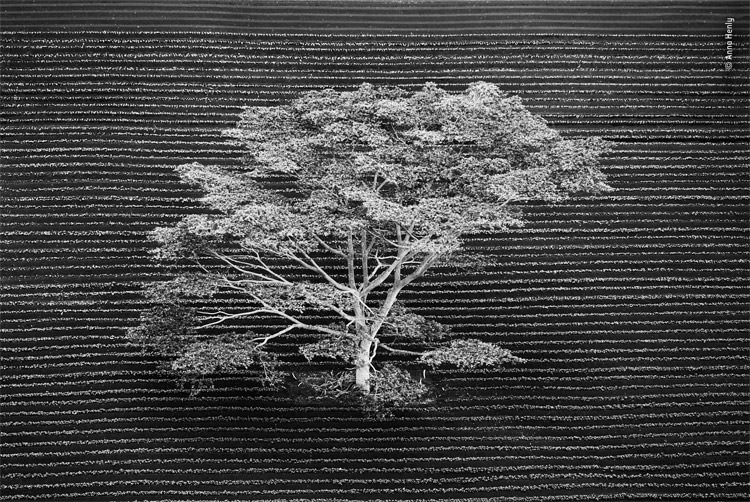 This photo was taken from inside the helicopter. This lone tree is located in an abandoned lot at the edge of a tropical forest in Kauai, Hawaii. The broken lines of the land are intertwined with the natural beauty of a tree’s wild and unruly branches. 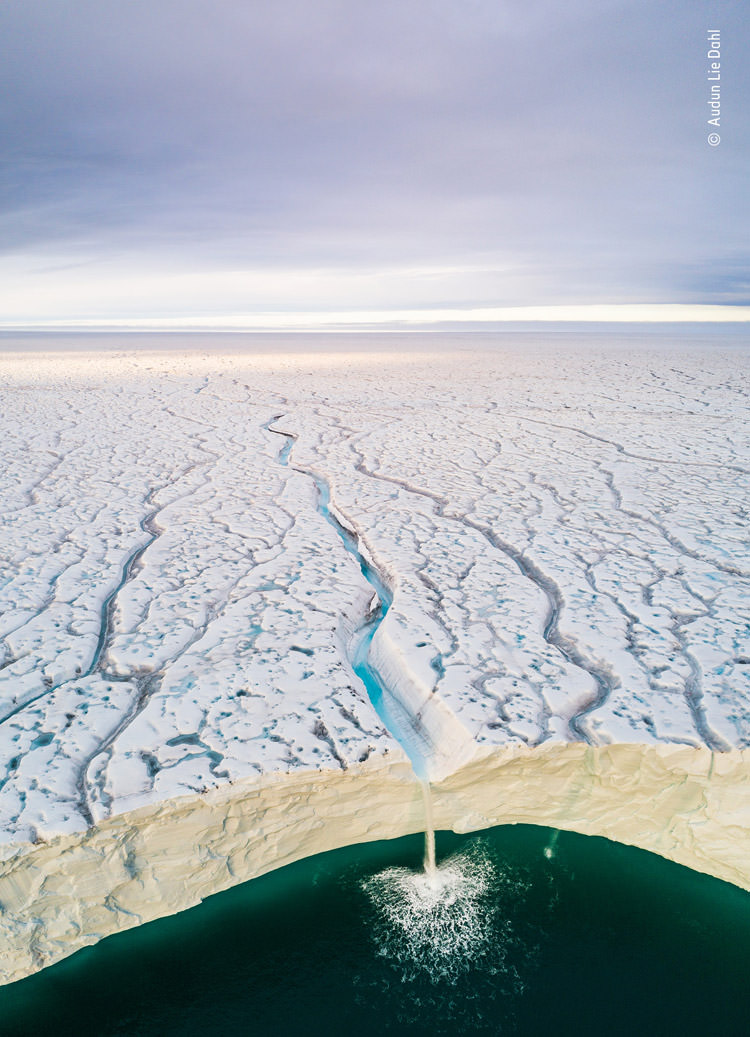 The Bråsvellbreen Ice River originates from one of the icebergs in the Svalbard archipelago in Norway and flows south. Where this river joins the sea, the ice wall is so high that only the waterfalls can be seen. As a result, Avedon used a drone to create such an extraordinary landscape. 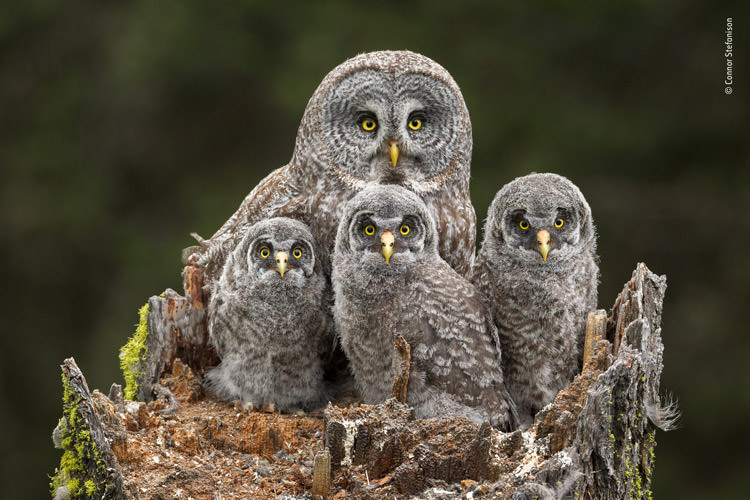 A gray owl and her chicks sit on top of a pine tree in Kamloops, Canada. They only looked at Conor twice the entire time he hid in a 50-foot (15-meter) tree during nesting season. 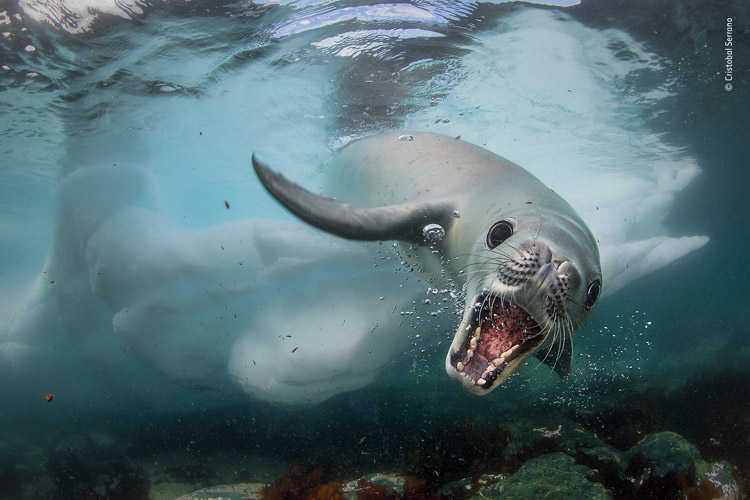 A close encounter with an animal in the wild lands of Antarctica is a completely random phenomenon. Hence, Christenball was thrilled by his unknowing encounter with a seal off Cuvervile Island in Antarctica. These curious creatures are protected species and live only in the presence of a few species of predators. 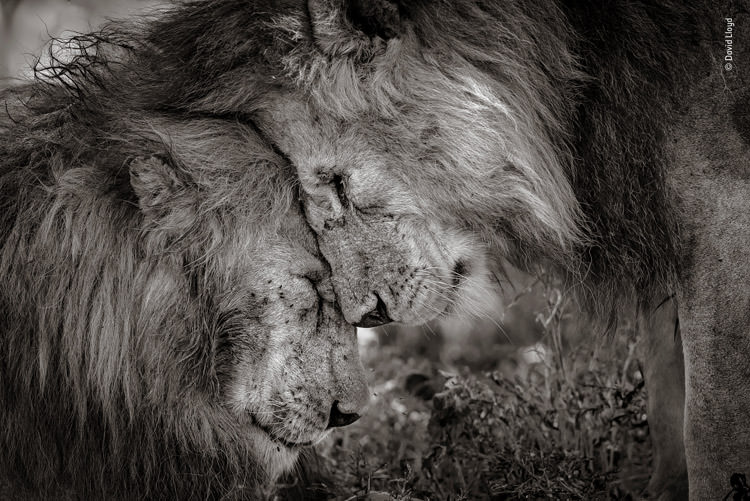 The two adult lions, probably brothers, rubbed their faces together for 30 seconds after meeting each other and settling down. Most people will never witness such a scene, and David was honored to experience and capture such a moment. 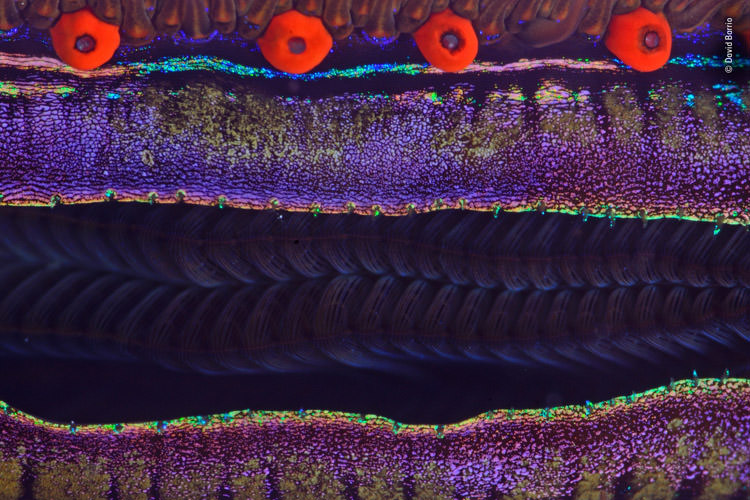 This macro photo was taken of a rainbow mussel in the Southern Red Sea in Marsa Alam, Egypt. The home of these oysters is among corals, where they build nests and grow. It took some time for David to approach the clam; he was afraid the clam had sensed his movements and closed. 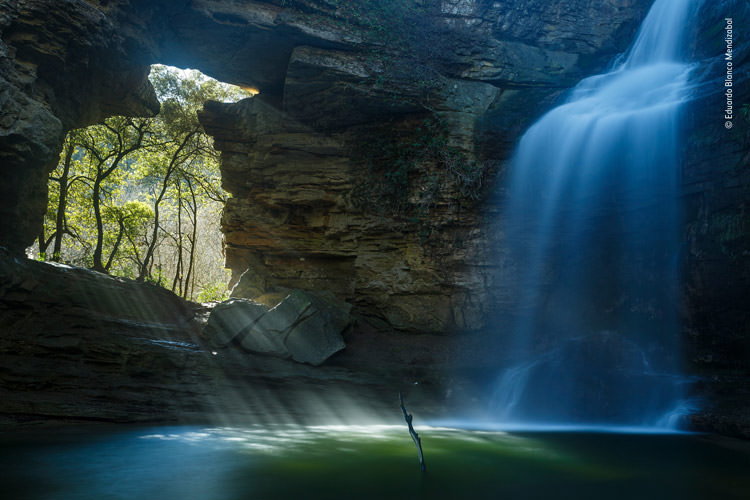 When the sun shines through a hole in the rock at the foot of the La Foradada waterfall in Catalonia, Spain, it creates a beautiful pool of light. It is as if the rays of light have been painted on the waterfall, and such a magical image has been made. 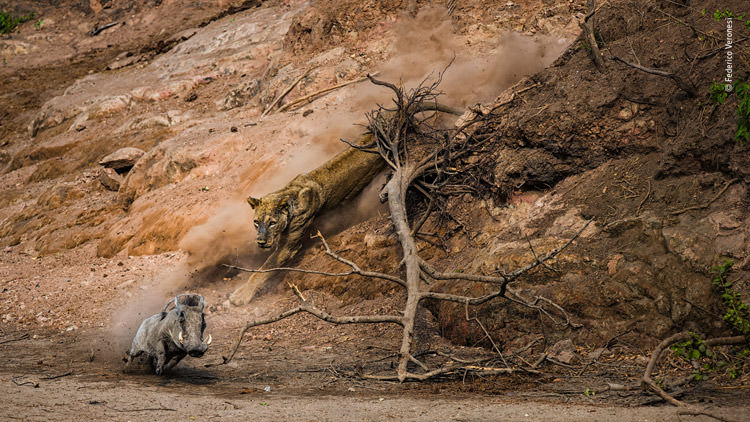 On a warm morning at Chitake Springs, located in Zimbabwe’s Mana Pool National Park, Federico watched an old lion come down the river bank. He was lurking to attack any animal that came near the river bed. 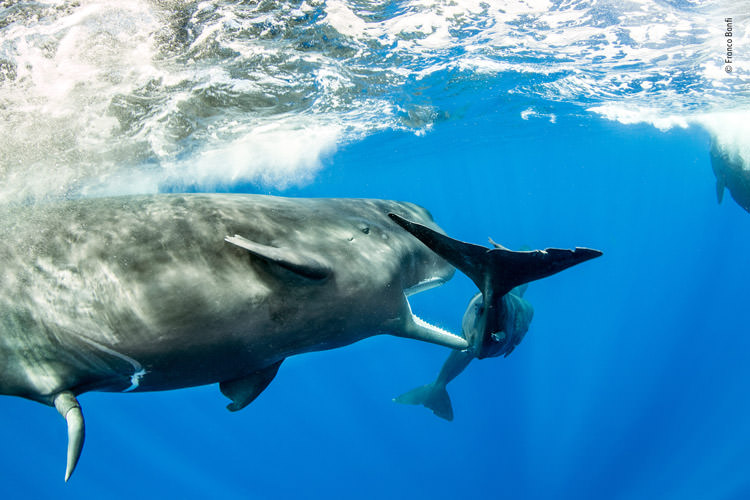 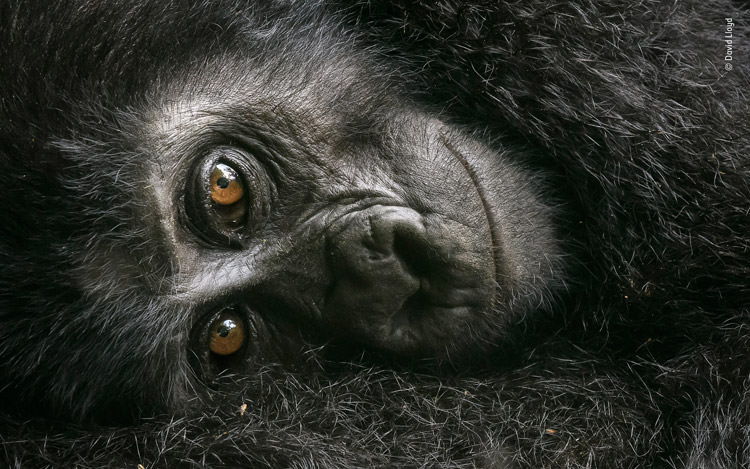 The baby gorilla was clinging to his mother when his curious eyes fell on David. He was walking in South Bwindi, Uganda, when he saw this family and followed them, finally capturing this image when they stopped in a small enclosure and began to rest and treat each other. 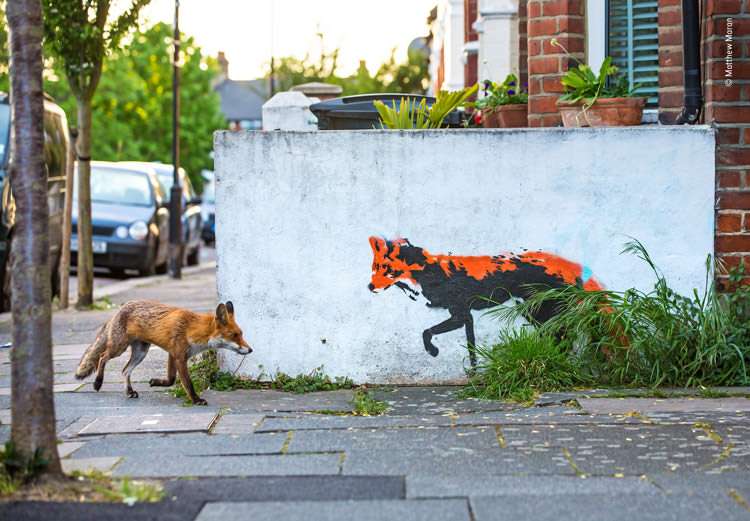 Matthew had been photographing foxes near his home in North London for over a year and had always dreamed of capturing such street art. After countless hours and unsuccessful attempts, his persistence paid off. 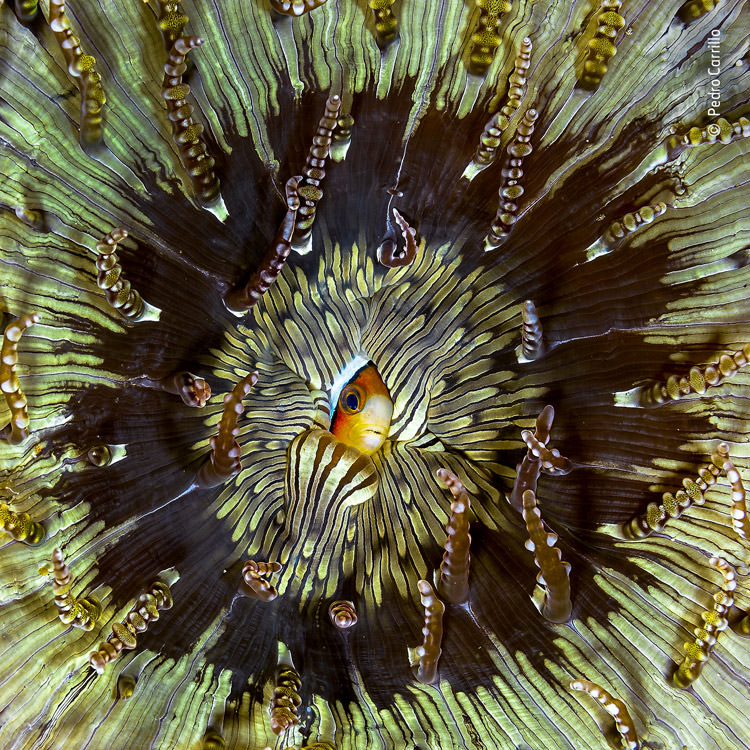 The mesmerizing patterns of this Numan anemone are beautifully blended with a Clarkii clownfish. This view is located in Lembeh Strait, Sulawesi, Indonesia. This anemone is referred to as a nursery because it is often used as a temporary home for juvenile clownfish until they find a more suitable adult host. 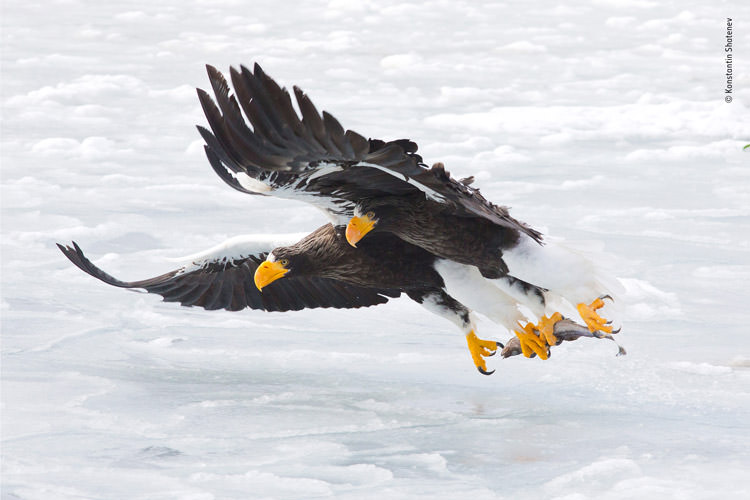 Every winter, hundreds of sea eagles migrate from Russia to the relatively ice-free shores of northeastern Hokkaido in Japan. They hunt in frozen waters and chase fishing boats for stranded animals. Constantine captured his photo inside a boat as the eagles snatched a dead fish from the ice. 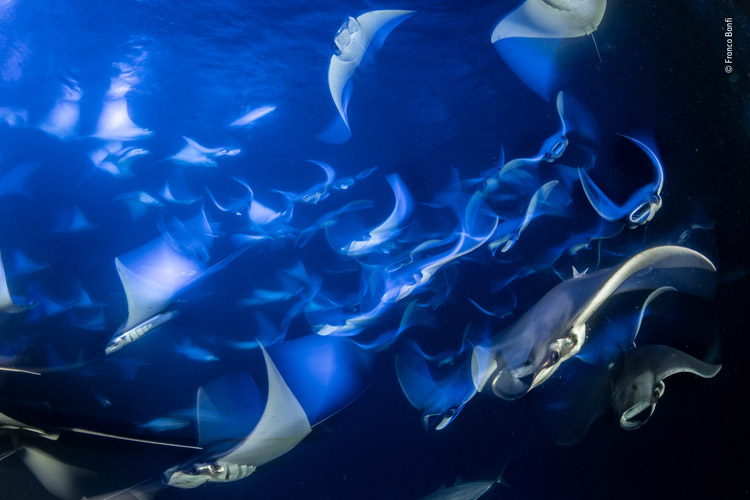 A group of panfish feeding on plankton under the moonlight off the coast of Isla Espiritu Santo in Baja, California, Mexico. Franco used the lights under his boat, and with a long exposure, he recorded this extraordinary photo. 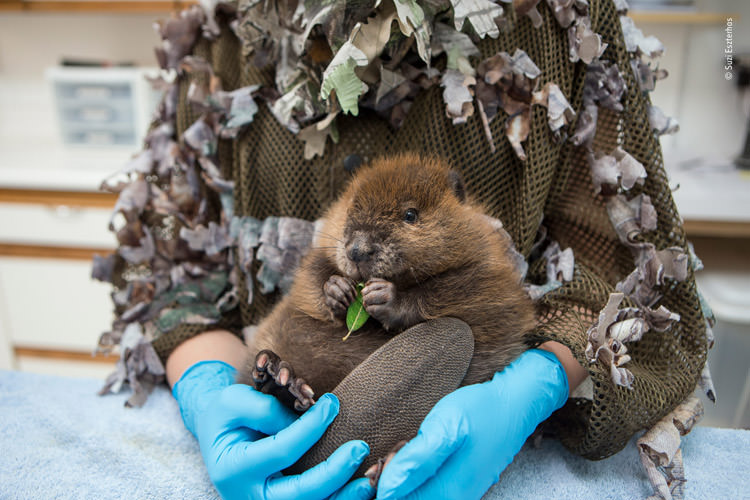 An orphaned North American water dog in the hands of a caretaker at the Sarvey Wildlife Animal Care Center in Arlington, Washington. Fortunately, he was paired with a female water dog who also acted as a mother to him, and then together, they returned to the wild. 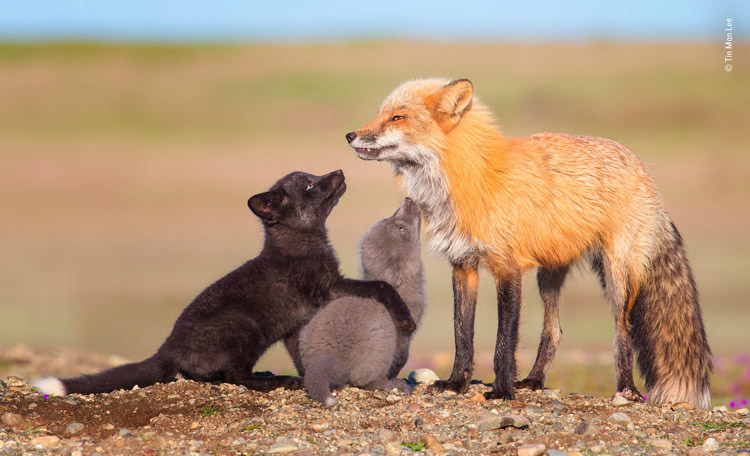 Tin was lucky to find a fox den in Washington State, North America, home to three red, black, and silver foxes. After days of waiting for a good scene and conditions, he finally got his reward with such an emotional and touching scene. 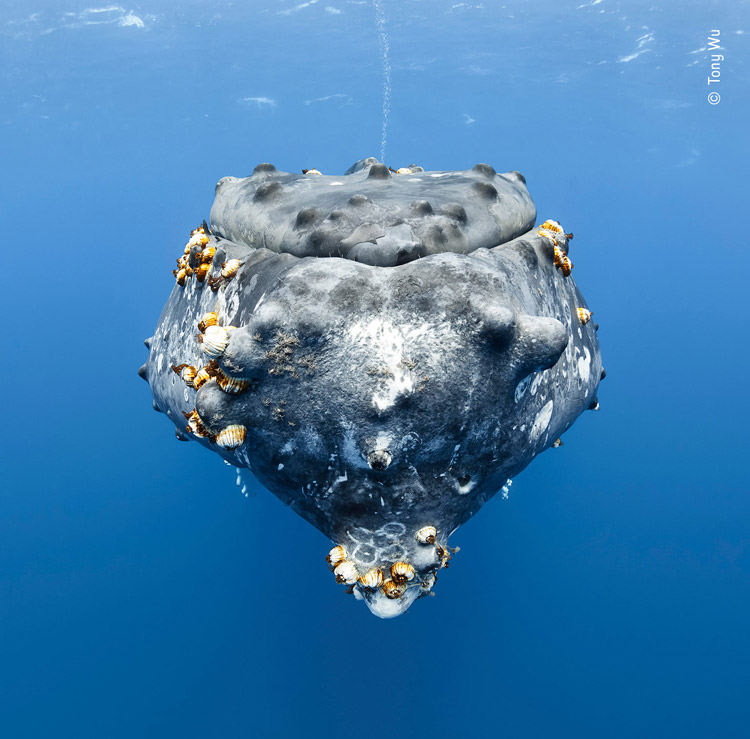 This adult humpback whale balances in the middle of the water and appears to be asleep. The bubbles above the animal’s head come from two holes on the top of the whale’s head, suggesting the animal is resting. The photo was taken at Vava “u” in the Republic of Tonga. 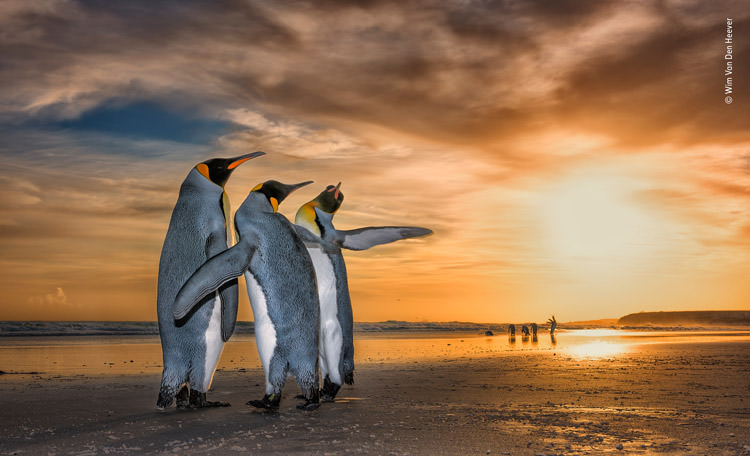 Wim made his way to these king penguins just as the sun rose. They were surprised in the middle of the mating operation. The two males circled the female penguin and used their legs to push the rival away. 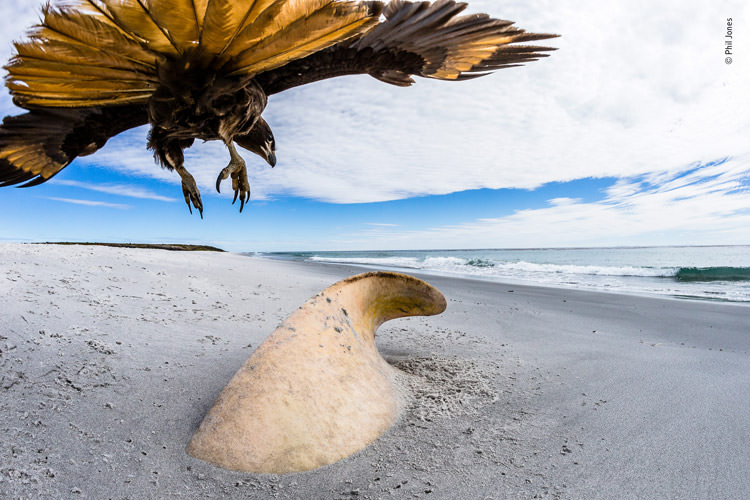 A male cowfish had washed a week ashore before the elephant’s trip to Lion Island in the Falkland Islands. Despite its large size, quicksand covered its entire carcass, and vultures and scavengers such as the striated caracara had begun to roam around. 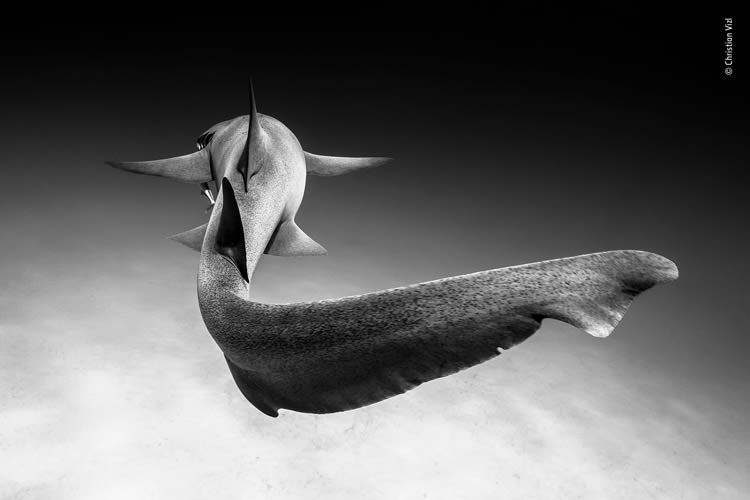 With a perfect viewing position and great sunlight shining through, Christian captured this portrait of a swimming nurse shark. Usually, these sharks are resting on the bottom of the sea, so it is scarce to see them swimming. The location of this photo is the edge of Bimini Bay in the Bahamas. 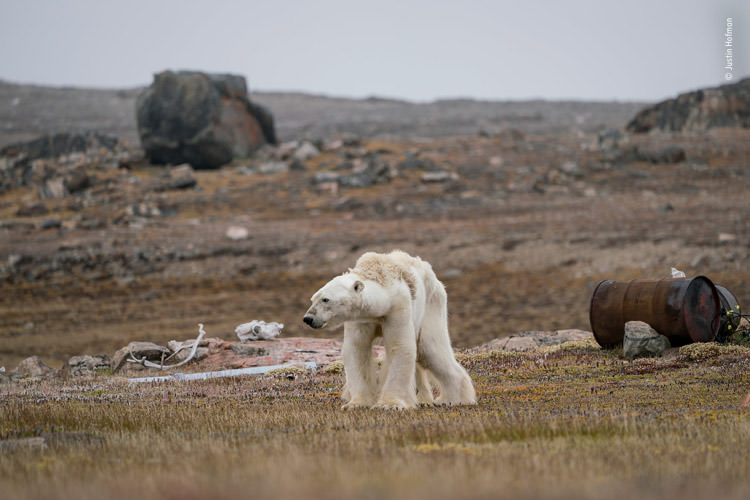 Justin’s whole body was aching from waiting to see this hungry polar bear slowly stretching his body. As the ice thins and shifts, the bear cannot find food. The photo was taken at a hunter’s camp in the Canadian Arctic. 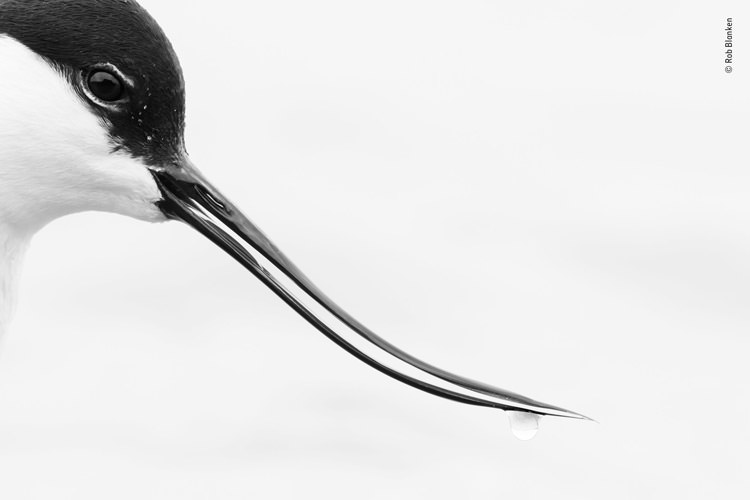 Ablaq Nook Dahnajri has a delicate and unique tip that swings like a sickle and probes the shallow salt water. This extraordinary portrait was taken from a hideout in the northern Friesland in the Netherlands. 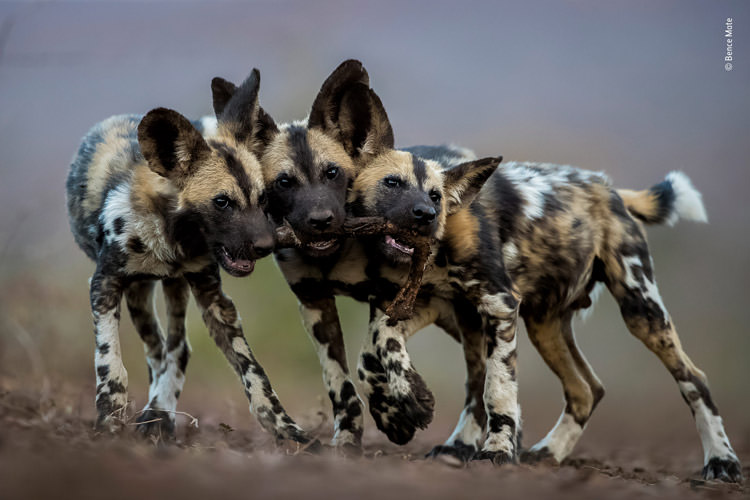 While African wild dogs are ruthless killers, their puppies are adorable and play all day long. Bence took this photo in Mkuze, South Africa, of these brothers. All four of these cubs were trying to play with the leg of an impala (a type of deer) and were pulling and moving it in three different directions. 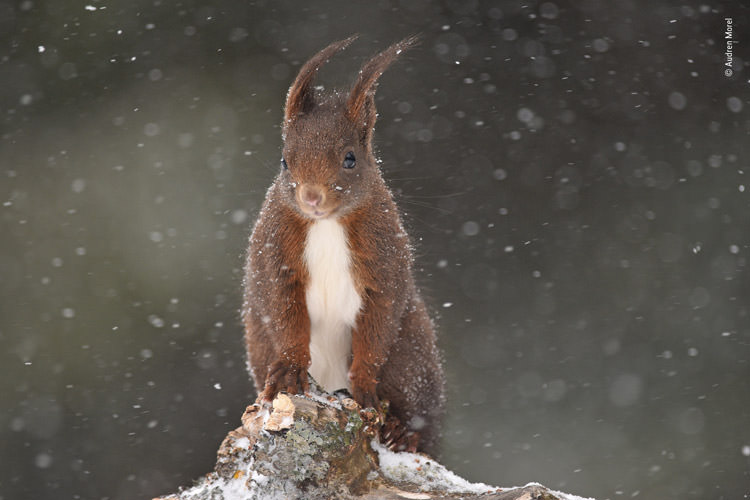 This squirrel has come to see Avdern without any fear of a snowstorm. Modern was photographing birds in the small village of Jura in Les Fourgs, France. While impressed by the squirrel’s resistance and effort, he made this animal the subject of his photography. 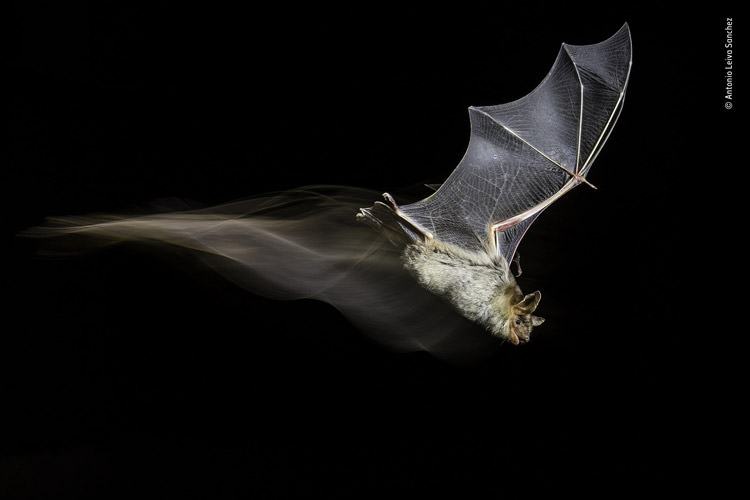 After months of field research in a big-eared bat colony in Success, Lleida, Spain, Antonio captured this photo of a bat in flight. He has used the technique of high-speed photography with flash combined with sequential light to illuminate the space.

What do you think about this photo collection? Please share your thoughts with us.