The Massive Sunspots That Have Appeared During Our Star’s Recent Activity Cycle Are Signal The Formation Of Potentially Harmful Solar Flares In The Coming Weeks.

Two vast groups of sunspots have appeared on the sun’s surface, indicating the possibility of increased bright aurorae and potentially harmful solar flares in the coming months. Some of these sunspots are so large that they can engulf the entire earth.

Following the new set of sunspots known as the “Active Areas” of 2993 and 2994, a third group appears to be currently hiding behind the visible northeast edge of the sun. A few days ago, the spots formed a powerful solar flare that did not hit the ground.

Each cluster is made up of several sunspots, covering an area of ​​hundreds of millions of square kilometers that is much larger than the diameter of the earth. Spots are caused by magnetic disturbances in the visible part of the sun’s photosphere, exposing the relatively cold layers beneath it.

Magnetic distortions and magnetic disruptions of the sun occur in 11-year cycles, and each process has high and low activity stages. Solar activity cycles have been numbered since 1775 when extensive record activity of sunspots began. We now see cycle 25, which has not yet reached its peak and shows that far more sunspot activity is on the way.

“I’m sure we will see bigger [active areas] over the next few years,” Dean Posnell, a solar physicist at NASA’s Goddard Space Flight Center, told the LiveScience website.

“The active areas of 2993 and 2994 are average in size and do not show the strongest activity that cycle 25 can produce.”

The current cycle is expected to peak at the end of 2024 or early 2025, Pesnell said. Can release The energy of active areas in the form of radiation (solar flares), and mass exits from the solar corona (CME), which are superheated plasma pellets.

These solar flares and CMEs can produce beautiful aurorae. Still, at the same time, they can endanger power grids, satellites, telecommunications networks, and potentially even space travelers beyond the Earth’s magnetic shield. 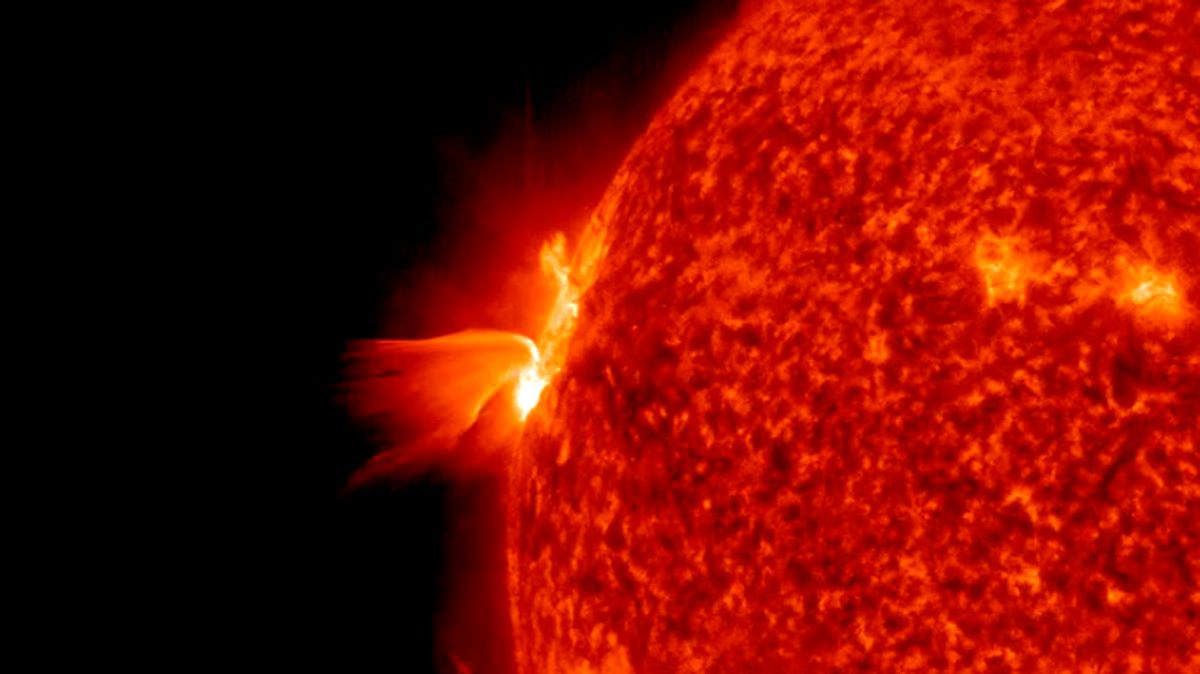 Jan Jansens, the communications specialist at the Center for Solar-Earth Excellence in Brussels, told LiveScience that the sun has been very active for the past few weeks and can not be expected to decline any time soon. Last week, the launched solar plasma, associated with an older bunch of sunspots, nearly collided with Earth.

“This is normal at this solar cycle stage,” says Jansens. “As the solar cycle reaches its maximum activity, areas with more sophisticated sunspots that can later produce solar flares will emerge.” According to Jansens, the records also show that the current level of solar activity is almost the same as the level of the previous cycle and even at this time is lower than the level of movement of the last solar process.

According to NASA, scientists divide solar flares into five classes A, B, C, M, and X, each ten times more powerful than the previous class. Each category has nine sections, and the most powerful Class X solar flares can be more than ten times more potent than X1 flares; As a result, there is no limit to the size of the paper. The most powerful burst recorded in 2003 disabled the sensors at the X25 level.

The US National Oceanic and Atmospheric Administration’s Space Weather Forecasting Center recently reported that an X-ray pulse from a Class X1 solar flare on Sunday severely cut off radio frequencies below 30 MHz across Southeast Asia and Australia. Still, the burst indicated that the CME’s stellar material from the last solar flare would not hit Earth.

However, when CMEs hit the ground, they can have severe effects, For example, disruption of power grids or radio communications or even damage to astronauts in space. They can directly damage satellite electronics and increase the drag force on satellites in near-Earth orbit by heating the upper atmosphere gases.

“Flares and mass eruptions from the solar corona will increase in the next few years, increasing the risk of solar activity,” says Pensnell. The modern world has not yet experienced the most severe effects of solar storms, and grid operators are now making their equipment resistant to such disturbances. However, some of the worst solar flares recorded in 2003 cut off electricity to parts of Europe and South Africa for several hours.