The brains of people with Alzheimer’s, Parkinson’s, and other neurodegenerative diseases are full of specific proteins in or around their neurons. How these protein aggregates can damage neurons is not yet clear, but the presence of protein aggregates is a symptom of these diseases, mainly observed in older adults’ brains (Figure 1). 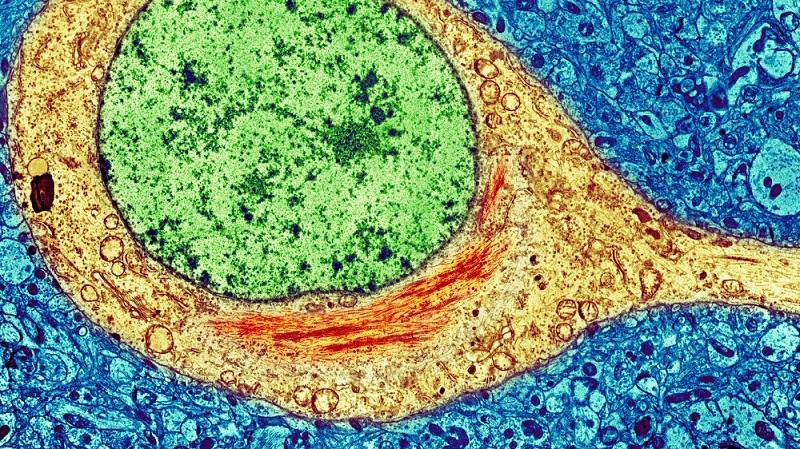 Figure 1 – Brain neuron of Alzheimer’s patient showing abnormal accumulation of tau protein (tau) in the form of piles of red fibers near the cell’s nucleus. These accumulations are signs of disease, but protein accumulation appears to occur throughout the body with age.

A study by Stanford University researchers shows that protein accumulation may be a general and common phenomenon in aging cells. It can be more effective in some aging-related diseases than previously thought.

The achievement of this research team shows that significant changes occur in cells with age, which can deal with using new methods, or at least its negative consequences can minimize.

Della David, who conducts research related to the field of aging, says in this connection:

“Protein accumulation is not only specific to one tissue but affects many different tissues.”

This research shows that protein aggregation is closely related to fundamental mechanisms that allow cells to fine-tune their physiology.

Biologists must carefully assess on a case-by-case basis whether protein aggregation threatens cells or a defense (Figure 2). 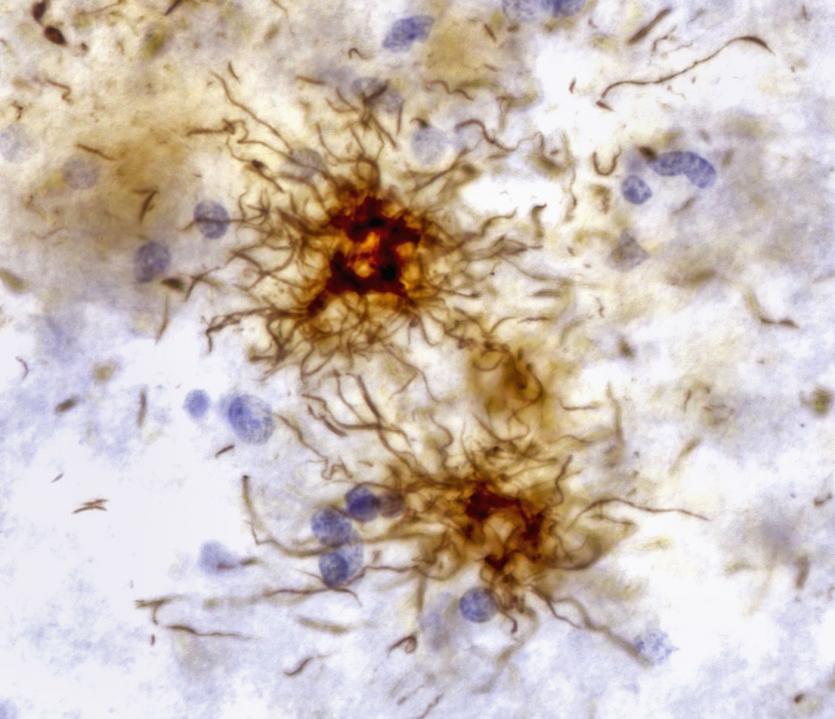 Figure 2 – In this part of a person’s brain tissue with progressive supranuclear palsy, tau protein accumulations (brown) block the spaces between neurons.

A new paper published in March on biorxiv.org describes the first attempts to quantify whole-body protein accumulation during the natural aging process of a vertebrate (a very short-lived fish).

This study showed that protein accumulation probably causes the gradual deterioration of many tissues over time. These findings even point to why these masses are much more evident in the brain than in other tissues; One of the possible reasons may be the high speed of brain development.

Dan Jarosz, a systems biologist at Stanford who oversaw the experiments with his colleague Anne Brunet, a geneticist, didn’t expect so many proteins to accumulate in the old fish, and they didn’t know how much of these proteins were in the old fish. Mutant forms are associated with degenerative diseases. He says:

Clues obtained from a fish

Crayfish, African turquoise fish native to ponds in East Africa and bred during the rainy season, have a very short lifespan. As these fish end their short lives of 4 to 6 months, they develop various age-related diseases, including cataracts and brain-related changes that resemble neurological disorders such as Alzheimer’s in humans.

These fish, which have a short lifespan, even less than a laboratory mouse, go through the natural aging process quickly, making them an ideal model for researchers to study aging in vertebrates.

Dario Valenzano, an evolutionary biologist, says: “The exciting thing about the above fish is that it’s not just protein accumulation or heart failure or brain dysfunction that happens with aging in this disease, and almost every organ and tissue As we look at it, it faces destructive changes with the aging process. (Figure 3) 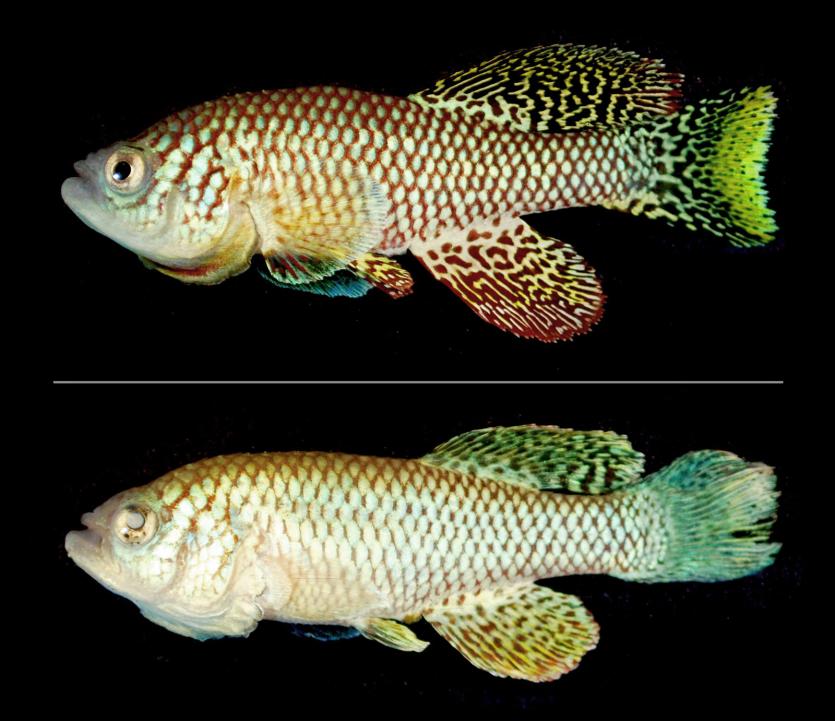 Figure 3 – African turquoise killifish is an animal with a very short lifespan of 4 to 6 months. As this fish goes from youth (top picture) to old age (bottom photo), it faces many problems that are very similar to the aging process in humans.

Mr. Stanford’s team extensively analyzed killifish proteins at different stages of youth and maturity. In old and aged fish, the researchers saw protein accumulation in every tissue they looked at, Not only the brain but also the heart, intestines, liver, muscles, skin, etc.

In subsequent experiments, more than half of the accumulated proteins appeared to have an inherent tendency to aggregate.

“The tissue breadth of the accumulated proteome is amazing,” says David. He and other researchers believe that these differences reflect how cells maintain the quality of their proteins.

Cells have complex mechanisms to ensure that the long peptide molecules that make up proteins are flexible and that the peptides can ultimately dissociate for recovery. Still, tissues differ in their dependence on different aspects of the protein quality control process. are different, and this probably changes with age.

“Why are these neurological diseases largely tissue-specific?” For example, no one knows why plaques of the amyloid protein of Alzheimer’s disease form in the brain’s hippocampus. So this accumulation in Parkinson’s disease is specific to dopamine neurons.

“Different cells probably maintain their protein quality differently, and that could be at least one reason different tissues should behave differently,” he says.

The study of worms and flies shows that if the mechanism that maintains the stability of proteins is disrupted, the animals age faster. If protein quality control pathways are genetically enhanced, these animals live longer. None of these words mean that protein accumulation causes aging, but it strangely shows a close connection between the two.

To further investigate the relationship between protein aggregation and aging, the Stanford researchers looked more closely at the proteins in killifish mutants that undergo abnormally rapid aging. These fish have a mutation in their telomerase enzyme gene, which maintains the length of divided chromosomes; Animals with telomerase mutations usually age quickly.

In part of his talk, Jarosz points out that he and his colleagues expected to see less accumulation in the gut and other tissues that grow or are replaced rapidly because the extra cell division in the rapidly growing tissues gives them more opportunity to Clear the lumps and rebuilding itself, but this was the other way around. Fast-growing tissues had more accumulated and misfolded proteins and aged faster than slow-growing tissues.

Once again, the problems related to the cell’s control over the quality of its proteins can be raised as a justification for this issue. If cells lose control of the processes that maintain the quality of proteins, they may become more damaged with each cell division. Fast-growing tissues may age faster because they are more likely to accumulate this damage.

Why is the aggregation of proteins sometimes complicated? Surprisingly, part of the answer concerns an important mechanism called condensation that cells use to control their proteins.

The complex three-dimensional shapes that peptides evolve into have long been considered to dictate the proteins’ activities and functions. But about a decade ago, discovered that a growing list of proteins has an intrinsically disordered region that bends into a fixed shape. Under the right conditions, masses of these proteins aggregate into droplets or condensates, a reversible process.

But disordered regions of proteins may cause them to clump together, wreaking havoc and severely damaging cells permanently.

Worse, some defective proteins mislocalize and aggregate and cause other proteins of the same type to mislocalize, leading to a chain reaction of aggregation. It is conceptually similar to what happens in mad cow disease and a different kind of Creutzfeldt-Jakob syndrome, in which folded proteins called prions trigger a wave of abnormal protein accumulation in the brain.

A second paper, published in March, provided more detailed information. In that paper, the Stanford team examined a protein called DDX5 that accumulated in the brains of aged killifish. DDX5, which is most active in its condensed state, performs various vital tasks in the body, often ensuring that other proteins are made correctly.

From the amino acid sequence of this protein, the researchers predicted that DDX5 probably behaves like a prion, and their subsequent studies confirmed the above issue.

A misfolded DDX5 protein causes increased misalignment and aggregation of other DDX5 molecules.

However, this gathering does not end here; The Stanford researchers found a variety of other proteins in the DDX5 clumps. John Labbadia, whose lab team at University College London studies protein quality control and aging, explained that these aggregates could sometimes act like sticky spots that trap other proteins and permanently interfere with cellular function.

“This study shows that we have proteins that accumulate as we age, and this can accelerate the accumulation of more proteins in a prion-like manner, which has not been seen before,” he says.

The Stanford team carefully determined which region of the DDX5 protein allows condensin to control its activity and found that this region predisposes it to aggregation. Interestingly, the control of the protein’s normal function and its tendency to aggregate are inescapably linked.

Precisely what causes clumps and how problematic this can be for cells remains an essential and profound debate. On the one hand, aggregates sequester DDX5 and other proteins, eliminating critical cellular functions. On the other hand, these aggregates may contribute to cell survival, called a protective effect.

An excellent example of the protective effect is the studies conducted on huntingtin protein, which is the most abundant in the brain. Huntingtin is essential for the healthy development of the nervous system, but in people with Huntington’s disease, a mutation causes the huntingtin protein to become abnormally long. Next, the long protein is broken down into smaller, toxic fragments that damage the nervous system.

In 2004, Steve Finkbeiner, a researcher at the Gladstone Institute and the University of California, began studying the accumulation of huntingtin protein in cultured nerve cells in the laboratory.

They showed that although all neurons with the abnormal huntingtin protein died over time, neurons with clumps of huntingtin survived longer than neurons without the protein. “It’s hard for humans to understand this,” says Finkbeiner, “because intuitively, things that look abnormal must be bad and pathogenic, but biology is complex and full of feedback loops; Therefore, it is important not to jump to conclusions and not be deceived.”

A global challenge with many solutions

What is now clear is that protein aggregation is not a phenomenon limited to neurological diseases. Many natural and essential proteins like DDX5 tend to aggregate, and dealing with this aggregation is a matter for cells. Protein accumulation is part of the regular operation of any cell to live long enough to become old.

Since cells have long faced the problem of preventing protein aggregation, this problem may play an essential role in the evolution of protein sequences. Brunet and Jaros observed this phenomenon more evident in the killifish brain. Hence, they speculated that this aggregation of proteins might be the key to keeping the organ in sync with biological changes.

If so, evolutionary changes in the brain that made it an essential organ in vertebrates may have made it more vulnerable to degenerative diseases caused by accumulation.

Indeed, it is likely that each tissue and organ must find a different balance between doing its job and managing protein accumulation. Each tissue has unique performance requirements and limitations. Intestinal cells are constantly changing; Endocrine cells make and secrete hormones; Immune cells act by identifying invaders; The brain processes information.

As you can see, different activities require different proteins.

In the sense that the evolved strategies to deal with protein accumulation are different from tissue to tissue and from animal to animal.

A critical hypothesis that scientists have proposed is that since the vertebrate brain evolved faster than muscles in the recent past, its protein quality control mechanism may not have had enough time to develop and protect against the accumulation of relatively new proteins.

All organisms face the critical problem of protein accumulation daily, and this issue is not exclusive to times of illness or severe stress. The prion-like DDX5 protein and similar proteins have an innate tendency to aggregate, and the organism tries to protect itself against aggregation. It is a physiological phenomenon that we all face.

Protein accumulation throughout the body is an aging-related factor in living organisms such as yeast, worms, flies, fish, mice, and humans. It suggests that we need more research in this area.