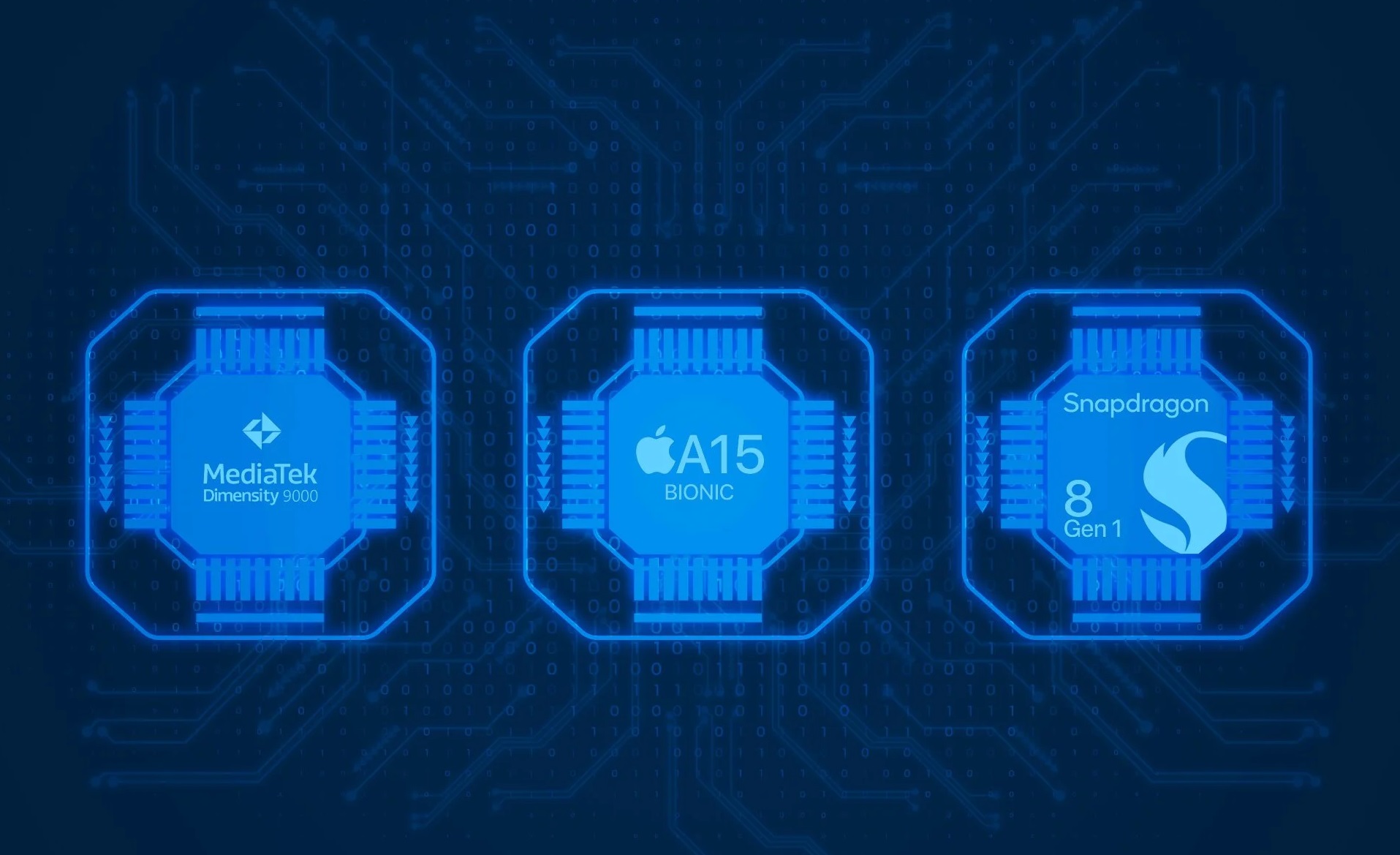 A Look At The Most Powerful Mobile Chips In The Flagship, Mid-Range, And Low-End Categories.

One of the essential parts of any smartphone is its chip, A small but potent component that manages and processes almost all tasks assigned to a mobile phone. The chunk of any smartphone can be considered the beating heart of the device.

The processor controls a smartphone’s hardware parts, such as the battery, camera, speaker, and screen.

In this article, we will introduce the best chips in the mobile world in three categories: flagship, mid-range, and low-end.

The best flagship chips of 2022

Apple has been leaning on the throne of the most powerful chip in the mobile world for years, A position that does not seem to change soon. The latest chip from Cupertino, the A15 Bionic, uses six processing cores consisting of 2 high-power Avalanche cores and four low-power Blizzard cores. 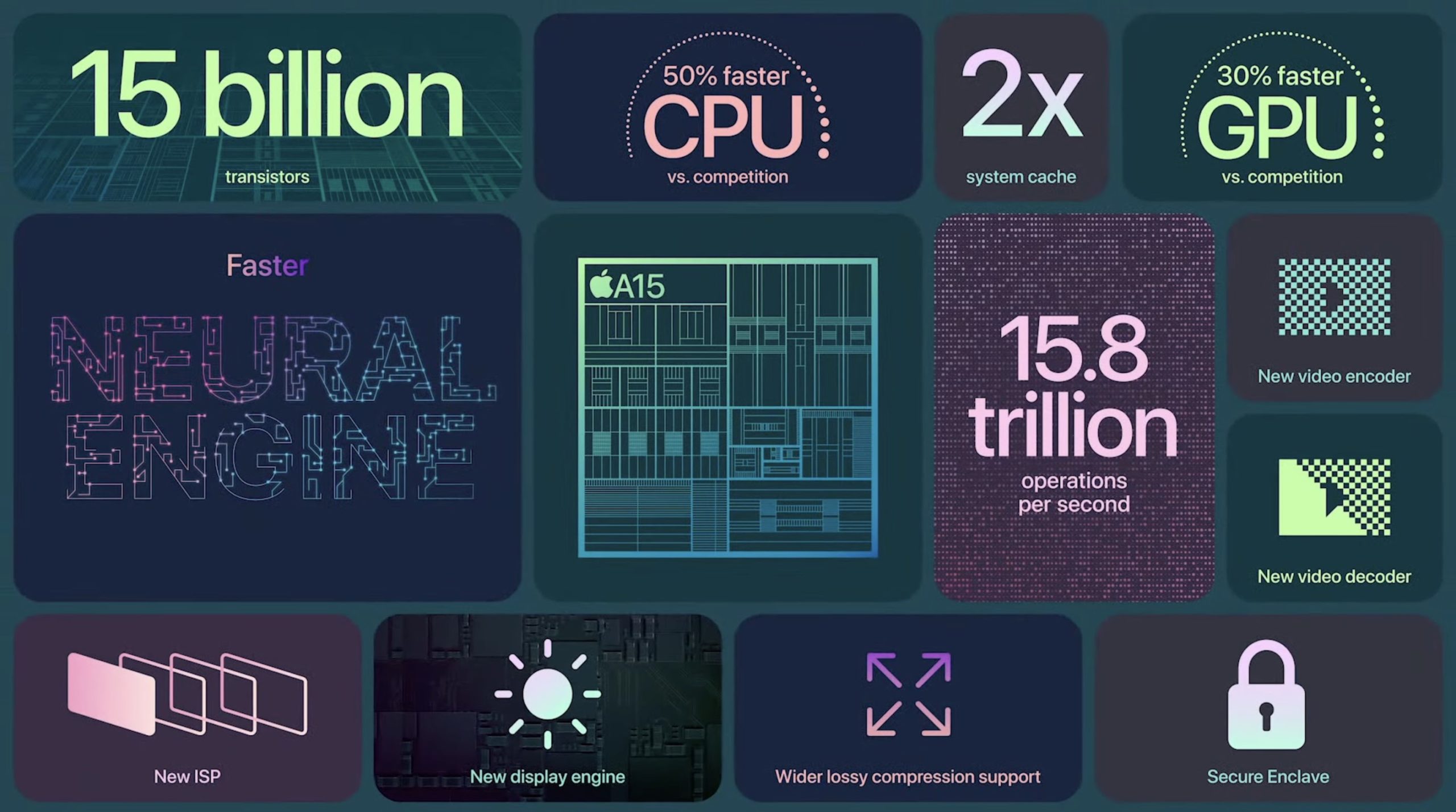 The giant of the technology world has developed the A15 Bionic chip based on 5nm lithography, and the task of its production has been entrusted to TSMC. The iPhone 13 series, iPhone SE 2022, and iPad mini 2021 can be mentioned among the phones equipped with this chip.

With the release of Dimensity 9000, MediaTek shook the foundations of Qualcomm’s reign on the mobile chip market in the Android world for years. This company achieved this by using TSMC’s 4 nm lithography.

Only two companies, Vivo and Xiaomi, have introduced the Vivo X80 and Redmi K50 Pro phones using the Dimensity 9000 chip. Unfortunately, due to the exclusive supply of both devices for the Chinese market, Zoomit has not managed to perform a hardware performance review. But according to various benchmarks published by multiple sources, Dimensity 9000 can be considered a serious competitor to Qualcomm and Apple in the world of flagship mobile chips.

Mediatek has recently introduced the Dimensity 9000+ chip, which according to the company, will have 10% more power than the previous generation. The modified model still uses the arrangement of 1+3+4 for its cores, and according to the announcement of this company, it will use in the upcoming flagships of this year.

In its latest attempt to further dominate the flagship smartphone market, Qualcomm has introduced the Snapdragon 8 Gen 1 chip. In terms of processing power, Qualcomm’s new flagship chip has not experienced significant progress; Then in fact, in terms of single-core and multi-core performance, we saw only 13.4 and 1.3 percent increase in performance; However, Qualcomm’s chip is still considered one of the best in the mobile world.

All manufacturing companies have released their new generation of flagship or gaming phones with Snapdragon 8 Gen 1, Such as Xiaomi 12 series, Galaxy S22 series, and OnePlus 10 Pro.

But as you probably know, the Snapdragon 8 Gen 1 chip is struggling with the problem of overheating, and many companies like Xiaomi have decided not to introduce the best models of their flagships with this chip. Samsung has created such conditions for Qualcomm with its architecture full of problems. The Taiwanese have entrusted their mid-generation model, Snapdragon 8+ Gen 1, to TSMC to solve the temperature problem. After this decision, Qualcomm’s flagship chip will experience up to 10% performance improvement and reduce energy consumption.

In the last days of December 2019 (January 19, 2021), in an unexpected move, Qualcomm unveiled its new chip called Snapdragon 870, which was not much different from Snapdragon 865 and Snapdragon 865 Plus in terms of hardware specifications. It seems that Qualcomm intended to extend the life of its previous processors again by relaunching its flagship last year. This time, the target market of Snapdragon 870 was the market of mid-range phones and not flagships.

After the Snapdragon 870, Chinese companies introduced a wide range of smartphones equipped with this chip, the most prominent of which are the Poco F3, Motorola Edge S, and OnePlus 9R.

Unfortunately, until the writing of this article, only a handful of models using the Exynos 1080 chip were introduced by Vivo, including the Vivo S15e model and the Chinese versions of the X60 Pro and X60 from Vivo. It is clear that due to the supply of the mentioned devices in the Chinese market, it is impossible to check them in the Zomit office. Therefore, we can only point to the single-core and multi-core benchmarks published by other websites, where Exynos 1080 scored 838 and 2938, respectively, in these two tests.

Mid-range chips are generally underpowered compared to flagship chips, But this is not the case with Dimensity 1200. Taiwanese company MediaTek has designed and developed a powerful chip to compete in the mid-range market, which can perform similarly to flagship chips. In fact, similar to what we have seen in the Snapdragon 870, in the Dimensity 1200, we see the same power as last year’s flagship chips.

The tests conducted in the 3DMark Wild Life benchmark show a 6% advantage in the stability of the Dimensity 1200 chip compared to the Snapdragon 870. Currently, no device equipped with the Dimensity 1200 chip has been reviewed in Zoomit’s office; But according to published reviews, the Mediatek chip has appeared up to 5% stronger than its American rival in the single-core test; But it is still about 12% weaker in the multi-core section.

Xiaomi 11T, Realme GT Neo, and OnePlus Nord 2 are among the leading smartphones equipped with Dimensity 1200.

One of the most popular and, of course, the most potent mid-range chips is the Snapdragon 778G. A chip has appeared in a wide range of mid-range devices and left an outstanding and stable performance. 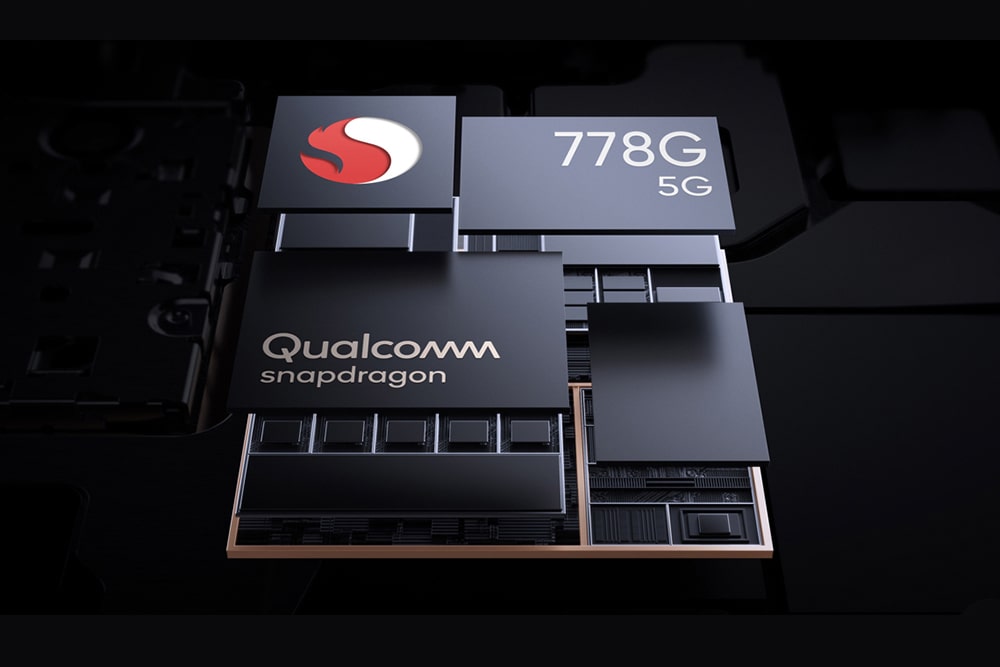 Using three clusters and powerful Cortex-A78 cores have dramatically helped to increase the chip’s performance compared to previous generations. Of course, let’s not forget the use of TSMC’s 6nm lithography, to which Qualcomm owes the central part of the stability of the Snapdragon 778G chip to this Taiwanese company.

The Snapdragon 860 was Qualcomm’s first attempt to relaunch a flagship chip in the mid-range and flagship killer market. This chip was an overclocked version of Snapdragon 855 and used the same 4+3+1 core arrangement.

In the field of processing power, if we want to have a brief comparison between the two Snapdragon 860 and Snapdragon 778G chips, we should mention the greater control of the central processor in SD778G and the higher graphics power of SD860. Of course, we should also consider that the SD860 consumes 10 watts, but this figure is only 5 watts in the SD778G! In the end, we must mention the similar stability of both chips.

The only smartphone released with the Snapdragon 860 chip is Xiaomi’s Poco X3 Pro, also one of the best-selling devices in the Iranian market. Of course, Realme also released a particular version of Realme X7 Pro with this chip, which we have omitted to mention due to limited supply.

Snapdragon 4XX series chips are among the cheapest chips from Qualcomm. But with the release of Snapdragon 480 Plus, this company showed that being cheap does not mean low power! 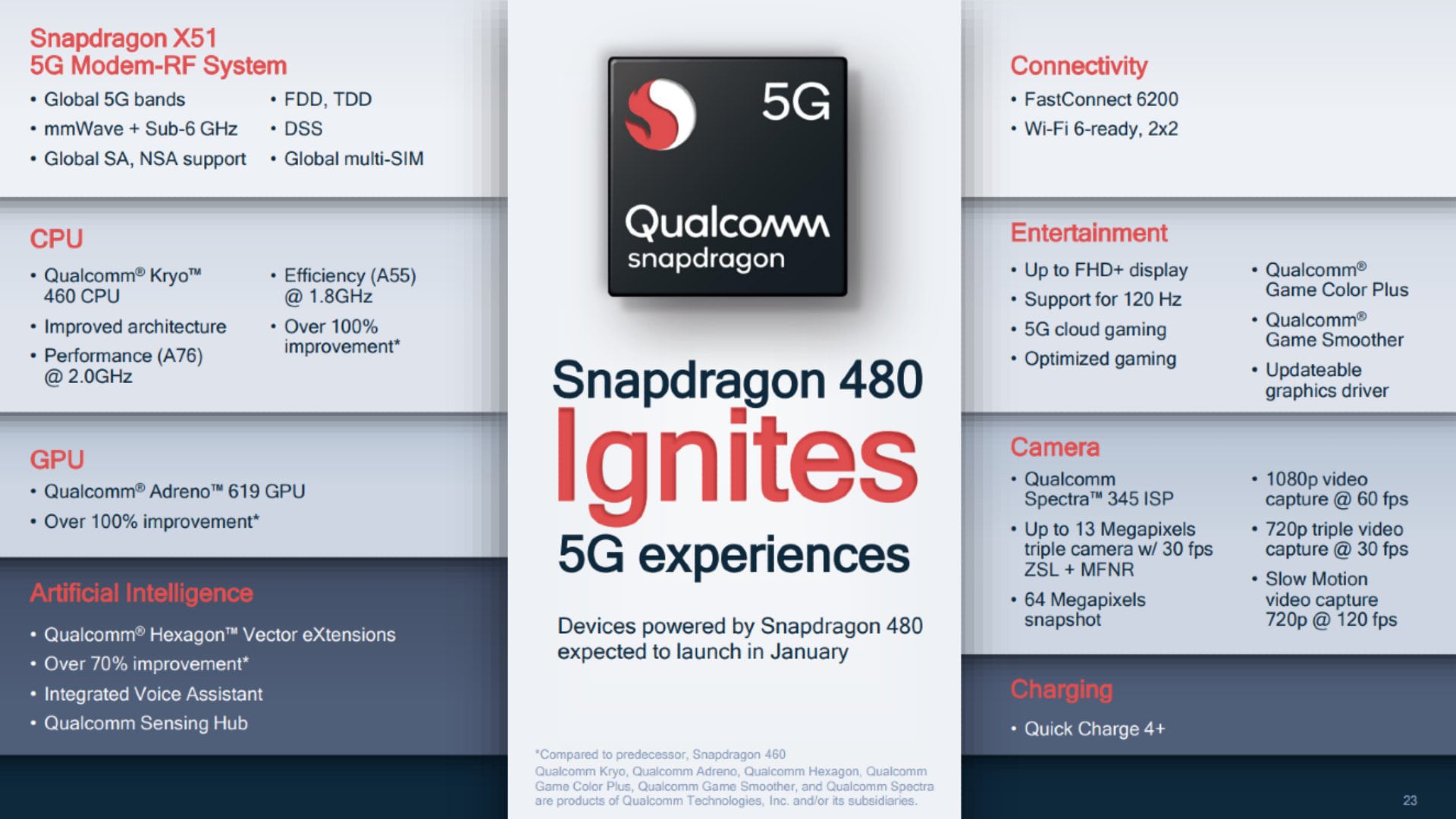 The cores of the Snapdragon 480 Plus chip offer up to 40% more power compared to the Snapdragon 680. Qualcomm’s low-end chip performs much better than the same company’s mid-range chip.

Currently, Motorola G51 is the only smartphone that comes with this powerful chip.

With the release of Snapdragon 480, Qualcomm somehow recovered its four series chips. So, compared to Snapdragon 460, we see a 110% increase in single-core performance! Also, in the multi-core field, SD480 performs up to 40% better than SD460.

Xiaomi, Nokia, Motorola, and Oppo companies have welcomed this chip; For example, since the release of this chip, Nokia has released more than five models for different markets in the world.

The most critical devices equipped with Snapdragon 480 are Nokia G50, Moto G50, and the OnePlus Nord N200.

The third best representative in the category of low-end chips is still the production of Qualcomm. In fact, after the significant increase in the power of mid-range chips and the re-supply of flagship chips in the mid-range category, as well as the need for smartphones to have more hardware power, the desire of smartphone manufacturers to use low-end chips has decreased even more. For this reason, updating chips in this category is much slower than in other types.

The Snapdragon 460 chip is developed based on 14nm lithography and uses eight processing cores in two clusters; The first cluster includes 4 Cortex-A73 centers, and the second cluster has 4 Cortex-A53 roots.

Due to the release in 2020, there are currently few manufactured models in the market, the most important of which are the OnePlus Nord N100, Nokia 3.4, and Moto G Play.

What do you think is the best chip in the mobile world? What chip does your device use?