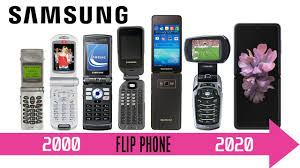 The newest and most innovative phones today are clamshell phones, some of which have opened their doors to the Iranian market.

In this article, we will see the list of the best clamshell phones that have been introduced in 2020.

The clamshell is now more important than ever among mobile phone companies as well as users. Although for a long time, we did not see the experience of a successful clamshell phone, but now, with phones like the Galaxy Z Flip, etc., we can hope for the future of clamshell phones more than ever.

The best clamshell phones of 2020

This Samsung clamshell phone was introduced in August 2020. This phone is practically a new version of Samsung Galaxy Fold, which has eliminated its shortcomings and has entered the market with a better design.

Both screens have holes that hold the selfie camera. There are actually two 10-megapixel cameras, one on the big screen and the other on the front of the device.

There are three cameras on the back panel, all three of which are 12-megapixel cameras, but one is wide, the other is ultraviolet, and the last camera is telephoto.

The beating heart of the Galaxy ZFold 2G is the Snapdragon 865 Plus processor paired with the Adreno 650 GPU and 12GB of RAM. The phone is available in two models, one with 256 and the other with 512 GB of internal memory.

we have to say that a 4500 mAh battery is provided for the Galaxy Z Fold 2 5G, which supports 25 watt wired charging, 11 watt wireless charging and 4.5 watt wireless reverse charging.

Currently, the price of the Galaxy Z Fold 2 5G clamshell phone in the Iranian market is between 67 and 71 million Tomans.

Another of the best clamshell phones of 2020 is the Galaxy Z Flip 5G, which was introduced in July 2020. This clamshell phone is different from other phones. In fact, the Galaxy Z Flip 5G is designed in such a way that you can easily place it on the surface and open the screen at any angle. Another point about this phone is the existence of a very small display on the outside of the device, which is used to display incoming calls, incoming messages, clock, etc.

The beating heart of this device is the Snapdragon 865 Plus processor, and only one model of this clamshell phone with 8 GB of RAM and 256 GB of internal memory has hit the market.

This phone has a 10-megapixel selfie camera and two main 12-megapixel wide and ultra-wide cameras. There is also a 3300 mAh back battery for this phone. The Galaxy Z Flip also supports 15-watt wired fast charge and 9-watt wireless fast charge.

The price of Samsung Galaxy Z Flip is currently around 30 million Tomans in the Iranian market.

The processor used in this phone is the Kieran 990 processor and comes with 8 GB of RAM and 512 GB of internal memory. The clamshell has four main cameras, including a 40-megapixel wide-angle lens, an 8-megapixel telephoto lens, a 16-megapixel ultraviolet camera, and a TOF 3D depth gauge. The same main camera is also used as a selfie camera.

Motorola is powered by a Snapdragon 765G processor with an Adreno 620 GPU, 8GB of RAM and 256GB of internal storage. We also see the use of a 48-megapixel main camera and a 20-megapixel selfie camera in this phone.

This clamshell phone also uses a 2800 mAh battery with a fast 15 watt charge. Motorola has set the price of this phone at $ 1,200.