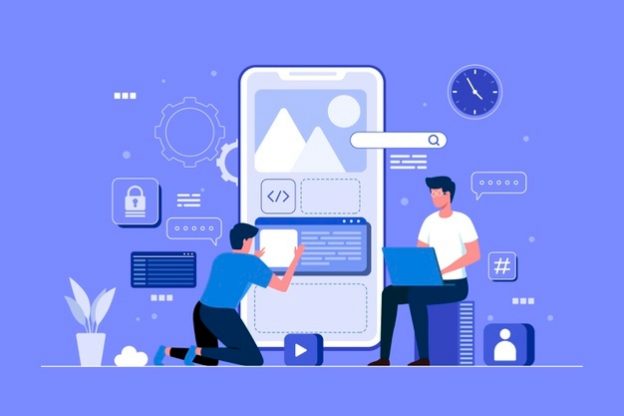 UI design software is an essential tool for website design. Because to design a simple, efficient, and attractive user interface, the first and most important thing you need is software design. Of course, the presence of a skilled designer who knows that everything on the site should be beautiful and easy to use is also important.

The discussion is about the software that can be used to place the elements on the page in the best way so that users can use it easily. All the forms on the site should be designed and implemented simply and attractively so that the user never feels confused or bored. The important point is that there are important and subtle differences between UI design software and website graphic design software. It is a point that many site designers do not pay attention to.

What points should be paid attention to when choosing UI design software?

1- Structured software with the possibility of designing the simplest spaces

What features should UI design software have? In simple words, the software should allow you to organize and determine the structure. It means the user can find the desired section and all the required information at a glance. The user should easily find out which section he should refer to reach any goal. The procedure of referring to different departments should not be long and complicated.

Choose a user-friendly design software that allows you to design easily and attractively. Always remember that the site’s most important goals should be provided to the users most simply. The more complex the technology becomes, the easier it should be. Otherwise, we will face failure. The clearest example for this part is Microsoft Windows. The wider its features, the easier it is to use.

The best UI design software helps to expose important content to the user in the simplest and best way. The user must be able to see and access everything he needs. The important point in UI design is how to face and respond to possible errors and problems. However, creating problems and errors is inevitable.

But the user must clearly understand where the problem is and how to fix it. The most important thing is to consider the possibility of user error. If the user has to start the whole process from the beginning due to any small mistake or go through a complicated procedure to fix the mistake, you will lose your audience very soon.

Which UI design software should I go to for user interface design?

UI design software does not have much variety to choose from. The number of UI design software is not very impressive. Still, these existing software can have the best output. Adobe XD, Sketch, and Figma are three UI design software that has found a favorable position among UI designers. In the following, we will provide a brief explanation of the capabilities and facilities of each of this software. Of course, we will briefly look at other suitable user interface design software available in the market for smaller projects.

With the help of Adobe XD, you can make a mockup of the design and share it. More importantly, after designing everything you need, you can test your design inside the phone and fix possible defects. Photoshop is the most similar software to Adobe XD. Anyway, it is not difficult to learn and use this software even if you are a beginner.

sketch UI design software was introduced to the world before 2016 and much before Adobe XD. Despite its complete and comprehensive features, it has one major flaw, placing it behind Adobe XD. The inability to install on Windows is the most important drawback of Sketch.

It means that only iOS users can use it. But its ease of use is such that you can easily implement an attractive and widely used design with the help of a few clicks. All its shortcomings have been solved with a special plugin. So Sketch can be considered a useful and simple software for UI design.

What is the best UI design software that can be used online? Figma software is one of the best UI design software. Its most important feature is that you can use it online. A feature that the previous two software did not have. Of course, it is also possible to install and use Figma offline. But the online use of this software has a very important advantage. At the same time, several UI designers can communicate with each other and work together on a design.

Axure UI design software (Axure RP): It is suitable for designing all kinds of diagrams, travel maps, and user interfaces, and it is fully compatible with Adobe Sketch and DX.

Envision Studio UI design software: With the help of this software, you can do various user interface design projects without coding.

In addition, Farmer X software. Marvel, Mockplus, Zeplin, and finally, Origami Studio are among the user interface design software you can easily use if necessary.