In this post, we are going to discuss an interesting topic in the world of computer science especially Artificial Intelligence. Machine Learning is a concept which changes ways of looking at problems. In the past, people dreamed of creating expert systems to solve problems without any interference. At first, scientists thought that they can create an expert system with the simulation of the human brain. But at that time there was no scientific knowledge to simulate the human brain so they couldn’t.  After several years and by the development of technology and the emergence of various intelligent devices and social media the idea of creating an expert system comes to scientists’ mind but this time by not simulating the human brain but with the new concept which is called Big Data!

Big data is defined as large pools of data that can be captured, communicated, aggregated, stored, and analyzed. 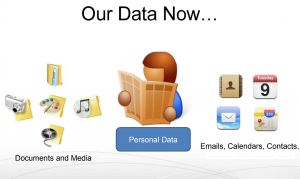 The World of Data

Based on IBM report:

How will we manage our data

As we said earlier, an important prerequisite of supervised learning is data. In this type of learning, we have a bunch of data that our model has to be learned from them…… as you can see in the above diagram, this prediction is based on previously captured data about the worth of houses that are divided into two categories. We use data to put houses into two groups. This step of capturing patterns of data called fitting or training the model.