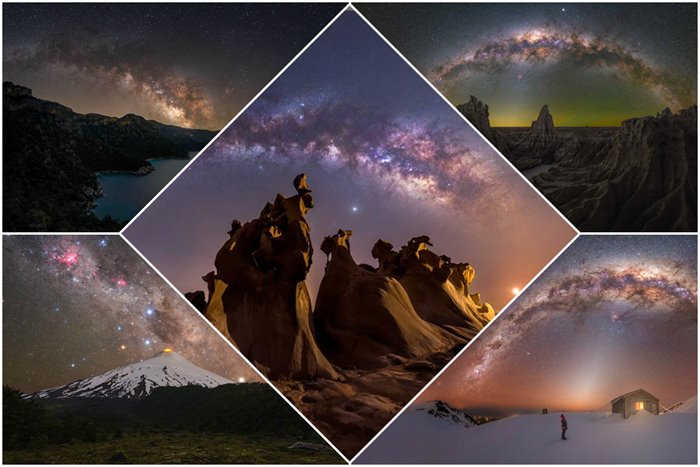 Travel And Adventure Photography Blog Capture The Atlas Has Released The Results Of The Milky Way Photographer Of The Year Event.

Adventure blog  Capture the Atlas has announced the featured images of 2021. There are no winners or runners-up in this challenge; Instead, this adventure blog showcases 25 of the best and most inspiring Milky Way poses from around the world.

The main factors in choosing these images are the quality, the story behind the photo, and the overall inspiration the picture can provide. The collection is released every spring, when the Milky Way is at its brightest, to inspire others and share the galaxy’s beauty.

In the following, we will see 11 inspiring images from this year’s selected photos with the stories that the photographer has experienced in each of them.

(Click on the images to see them in their original size) 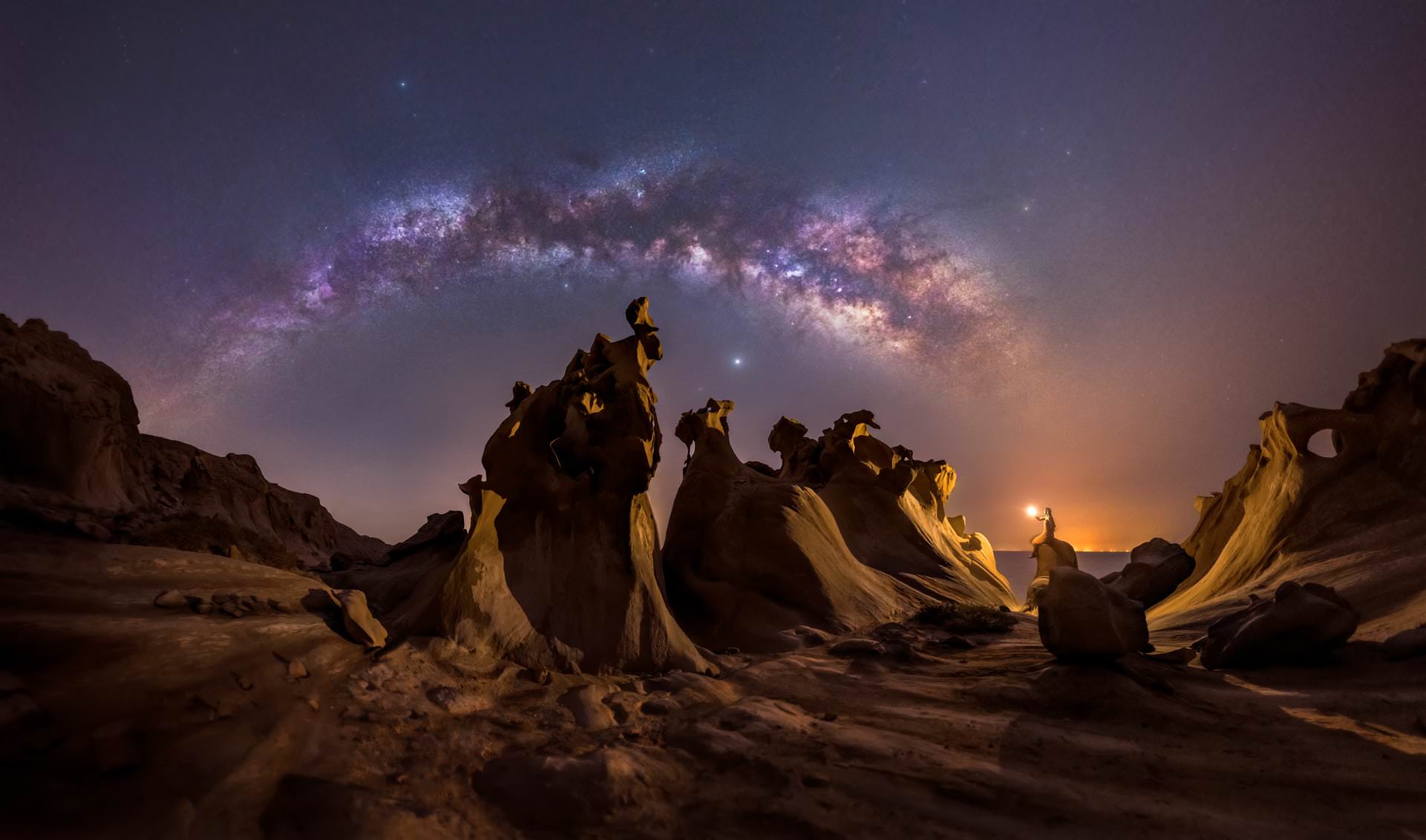 In this image, the emergence of the Milky Way galaxy can be seen on a charming spring night on the shores of the Persian Gulf. The stunning cliffs of this area will make any viewer dream and make you want to have a conversation with them. Due to the city’s light pollution severity, the image required post-processing, which was a challenging issue for Mohammad Khayat.

I try to achieve an artistic look in my pictures. Also, in this picture, I tried to convey and depict the magic of this place. 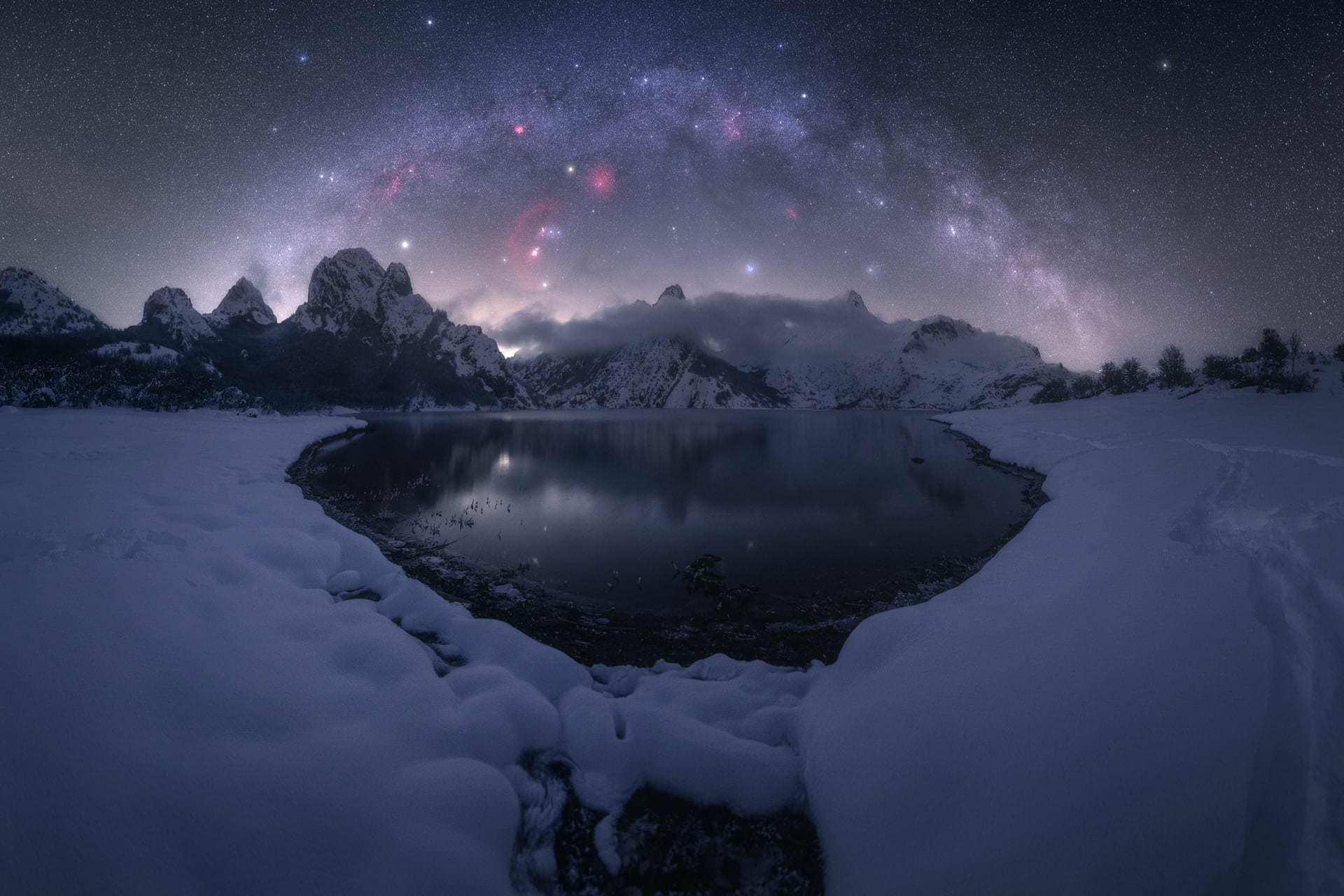 I captured this image last winter at Riano Mountain Reservoir in Spain. The most significant difficulty that night was the cold. The air temperature was below -10 degrees, and the humidity in the tank was freezing my camera lens; it was tough to photograph for a long time.

Pablo Ruiz says about the planning of this project:

I estimated the photo position using the PhotoPills app, and when the weather forecast looked promising, I decided to go to the mountains and shoot. With the help of the combined milky way in winter, a magical and beautiful landscape was created in the mountains and the water tank. 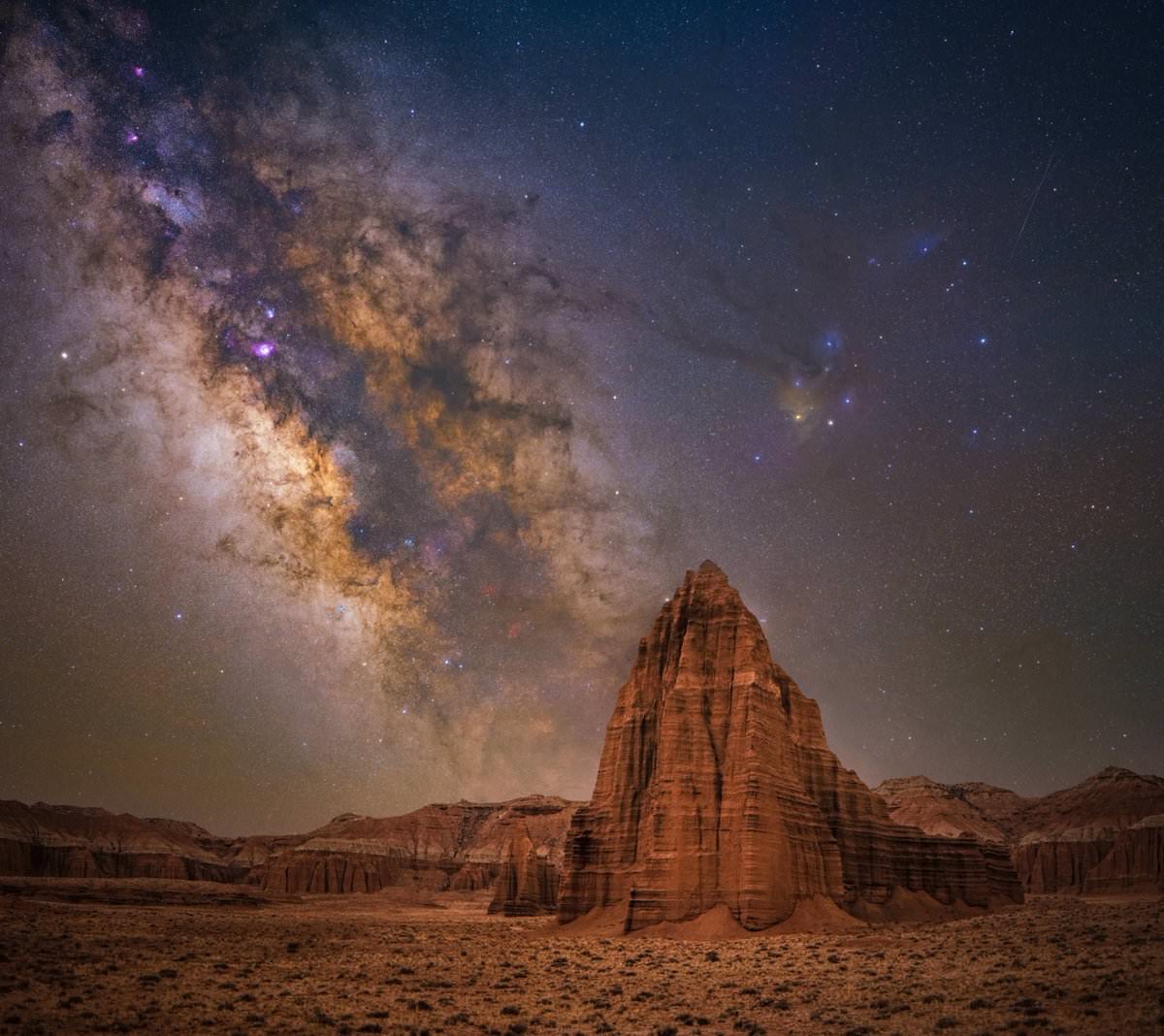 The core of the Milky Way rises before dawn under the southern sky of the Temple of the Sun in Capitol Reef National Park. This area of ​​the Colorado Plateau Desert is known for its domes, elf chimneys, fins, cliffs, natural bridges, slot canyons, and sun and moon temples. The arrangement of the temples with the Milky Way in this picture is more than a coincidence. The vivid orange color of the temples reflects the color of the stars in the sky. 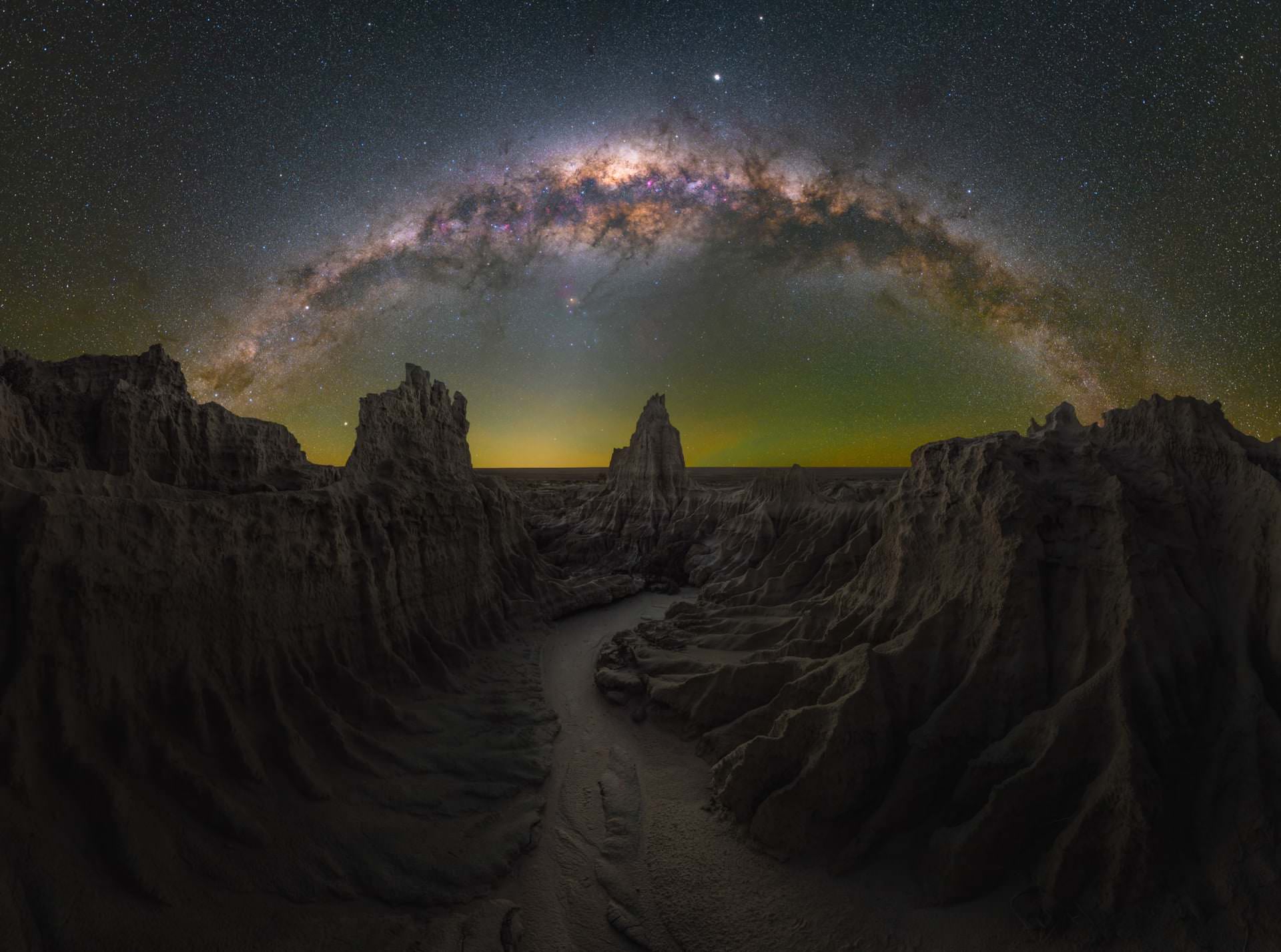 This image of the night view is the most lovely image I have captured to date. Mungo is 12 hours away from my home in Sydney, But this sky is the best picture I have seen and photographed at night. I had good conditions and visibility during the three nights I was in this area. When I recorded this scene, I knew exactly what I wanted to title. Amazingly, the scene turned out precisely how I wanted to capture it.

Giant, jagged walls framed a winding path that led to a turret to the west. There was only one way to do justice to this scene: a multi-layered panoramic image of the Milky Way. 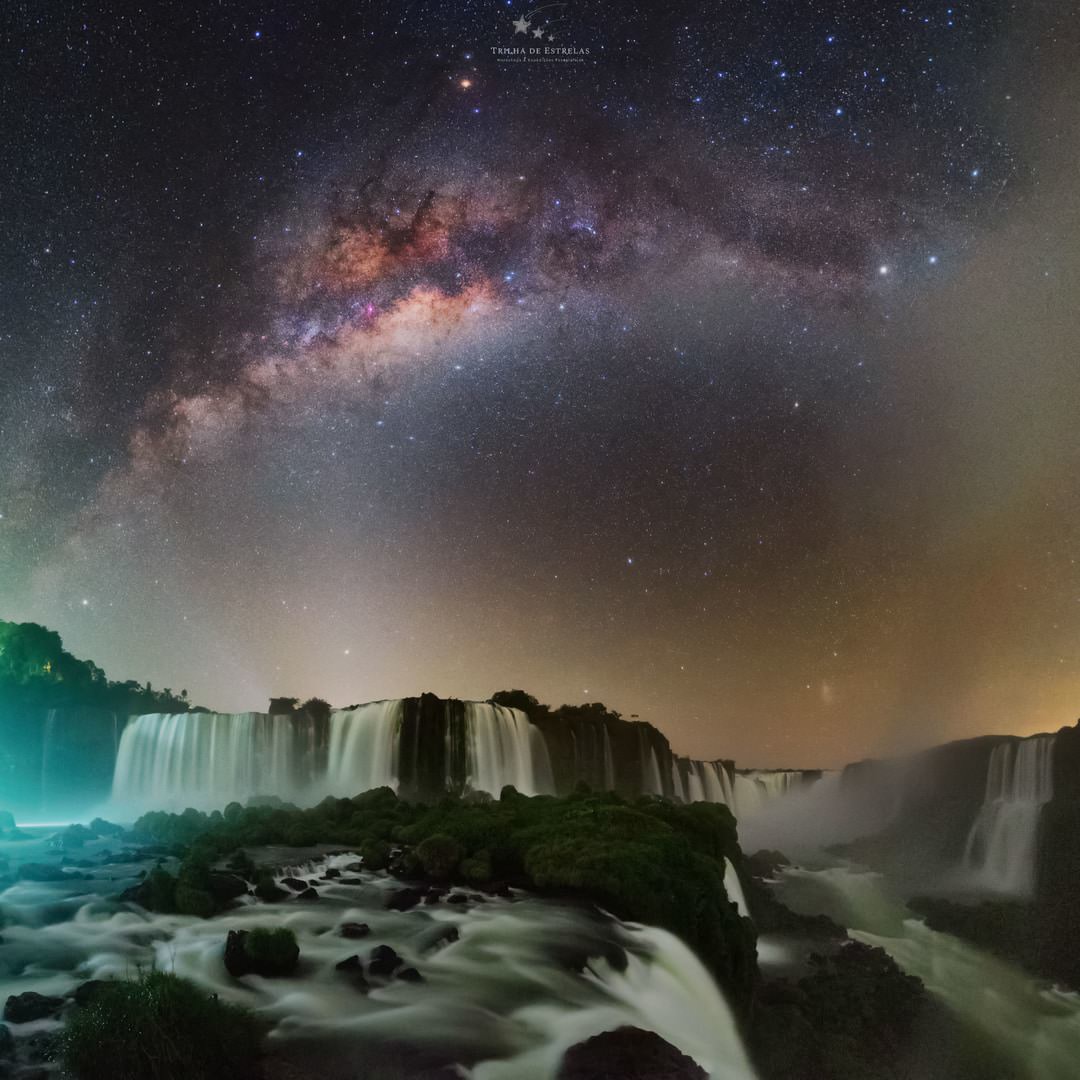 Photographing Iguazu Falls has always been one of my most important projects. To do this, I needed a special permit from the Environment Agency, responsible for Brazil’s national parks. Finally, in early 2021, I received this permission and implemented my plan. I was at Iguazu Falls for four days and had special access to the falls with my students.

Victor Lima says about the challenges of this project:

The first challenge was to be able to walk around the park at night despite the presence of jaguars. We knew several jaguars lived there; because the employees and tourists had seen them before. In the area closest to the central falls, the big challenge was to create long-exposure images with a strong spray of more than 1.5 million liters per second from the falls. It was almost impossible to work with an exposure time longer than 10 or 15 seconds; Because the camera lens never stays dry due to splashing water.

In this picture, we have one of the main waterfalls of the Iguazu Falls, “Santa Maria Jump.” After the falls, we can see Saturn and the zodiac light lighting up the horizon. Above that is the core of the Milky Way galaxy. Some of the primary emission nebulae can be identified in this region of the sky. 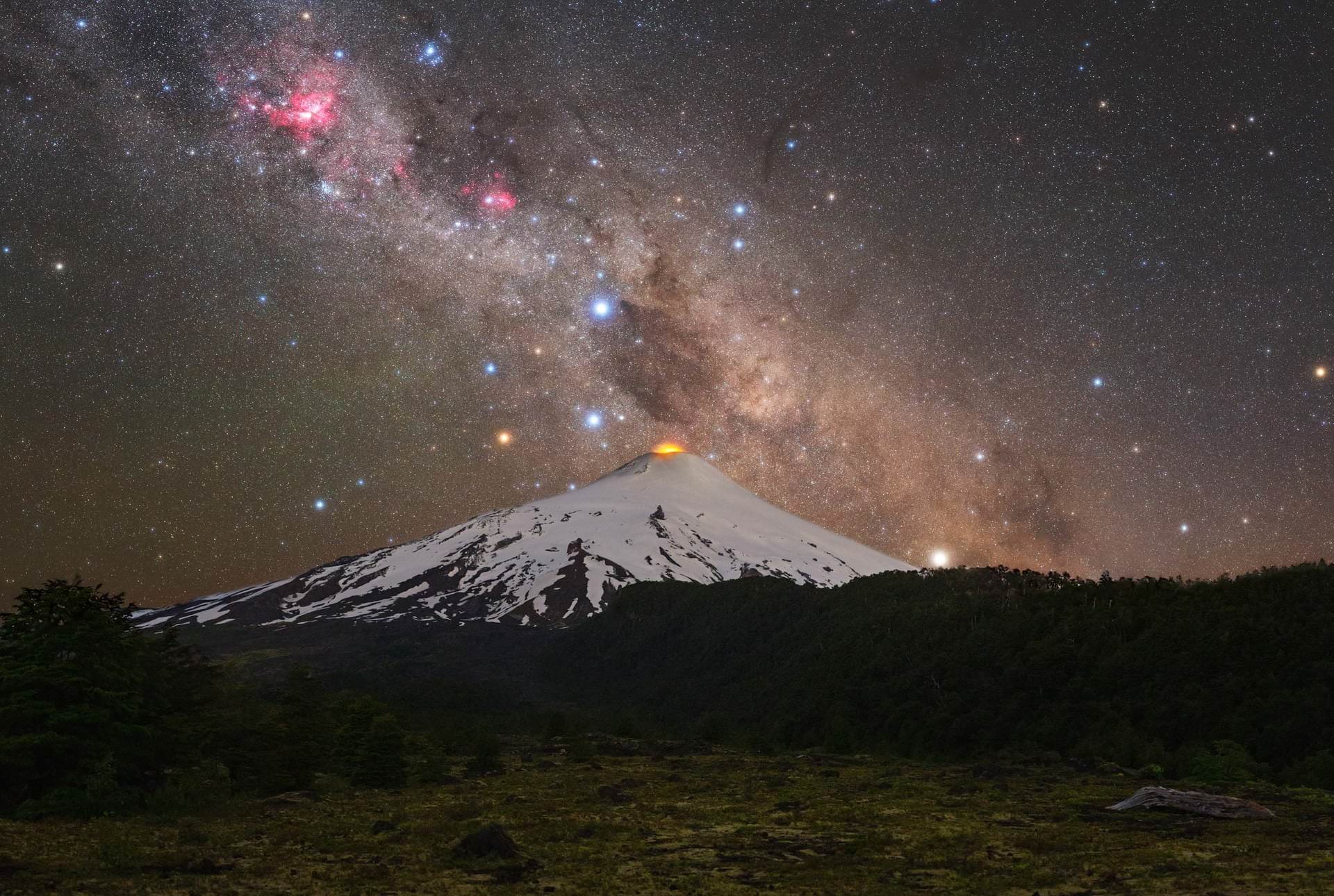 If you have never seen the southern sky, you should know that you are missing a different and fantastic view. In the northern hemisphere, Polaris is used as the pole star; But below the equator, there are other rules. The best indicator to recognize the southern celestial pole is the constellation of the Southern Cross, which is located directly above the Villarrica volcano in this image. This cross refers to the southern hemisphere of the sky, which is easy to identify due to the brightness of the stars. Inside the cross, we can see a dark region called the Colosseum, which is visible to the naked eye and is one of the best-known dark nebulae in the sky.

In the upper left corner, the Carina Nebula can be seen in red. This companion can only be seen in the southern hemisphere, and although it can be seen with the naked eye, observing it with a camera will show us beautiful details. 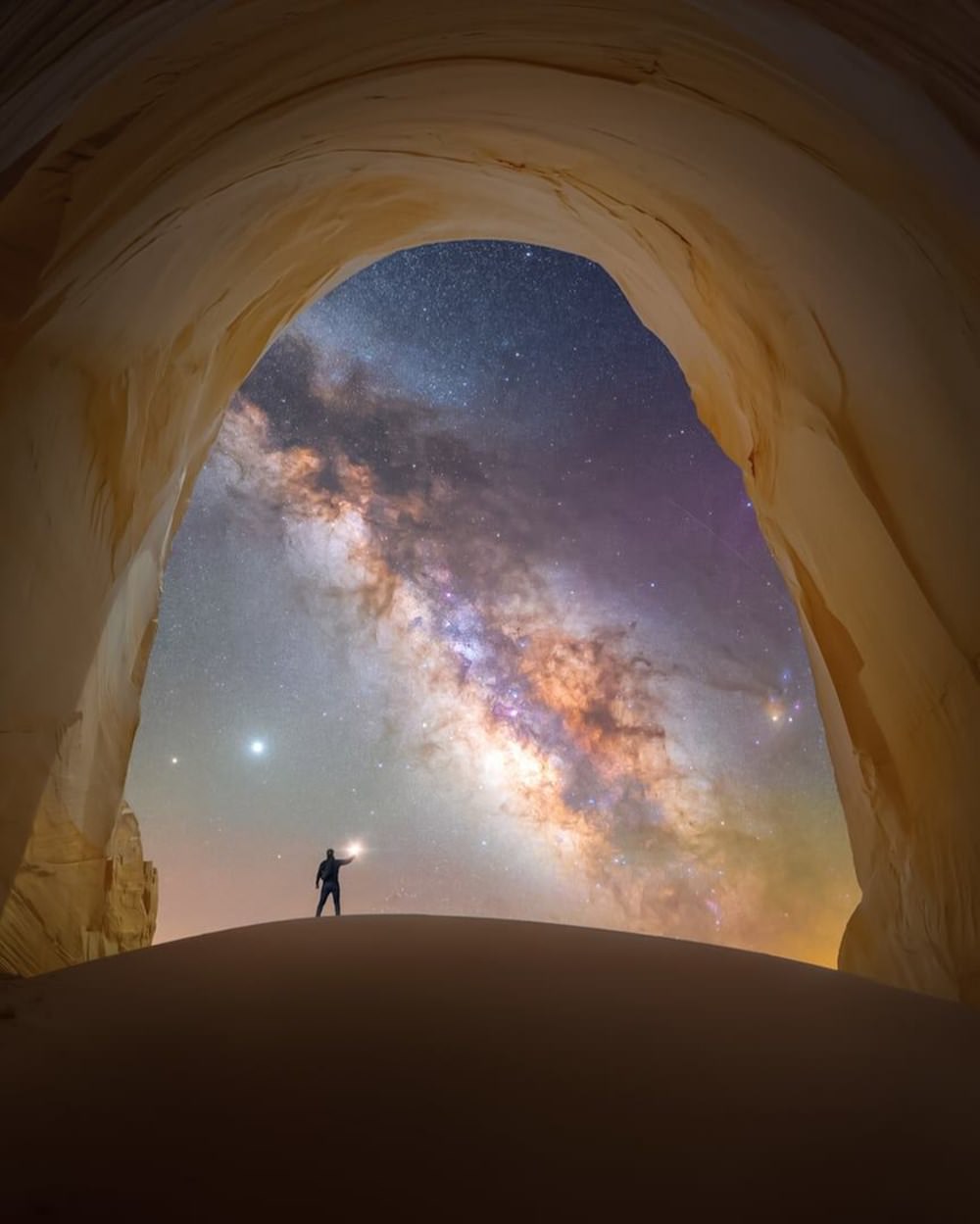 In the desert Southwest, there are plenty of places to photograph the night sky. Due to the abundance of visual beauty in the southwest, it is possible that we will not be able to see some celestial jewels.

The picture above shows one of these places, located under the remote cliffs of Grand Sturkis Escalante. Due to its remoteness, this natural rock enclosure offers the most detailed and pristine views of the Milky Way, surrounded by the copper crater of the cave.

This image is one of the most challenging I’ve ever taken; Because to reach Phantom Ice Peak (volcano next to Mt. Taranaki), I climbed for about 4 hours in 70 km/h wind. At an altitude of 2,000 meters and a temperature of -15 degrees Celsius, and amid strong blasts of wind, I had to choose settings that would allow me to take pictures of the scene; In case these settings were not as ideal as I wanted them to be.

Lauryn Ray says about her feeling about this photo:

I am thrilled that I captured this image from a clear sky. This project tested my climbing skills and endurance, But I could move all my stuff to this place. This experience is full of honor and success for me. 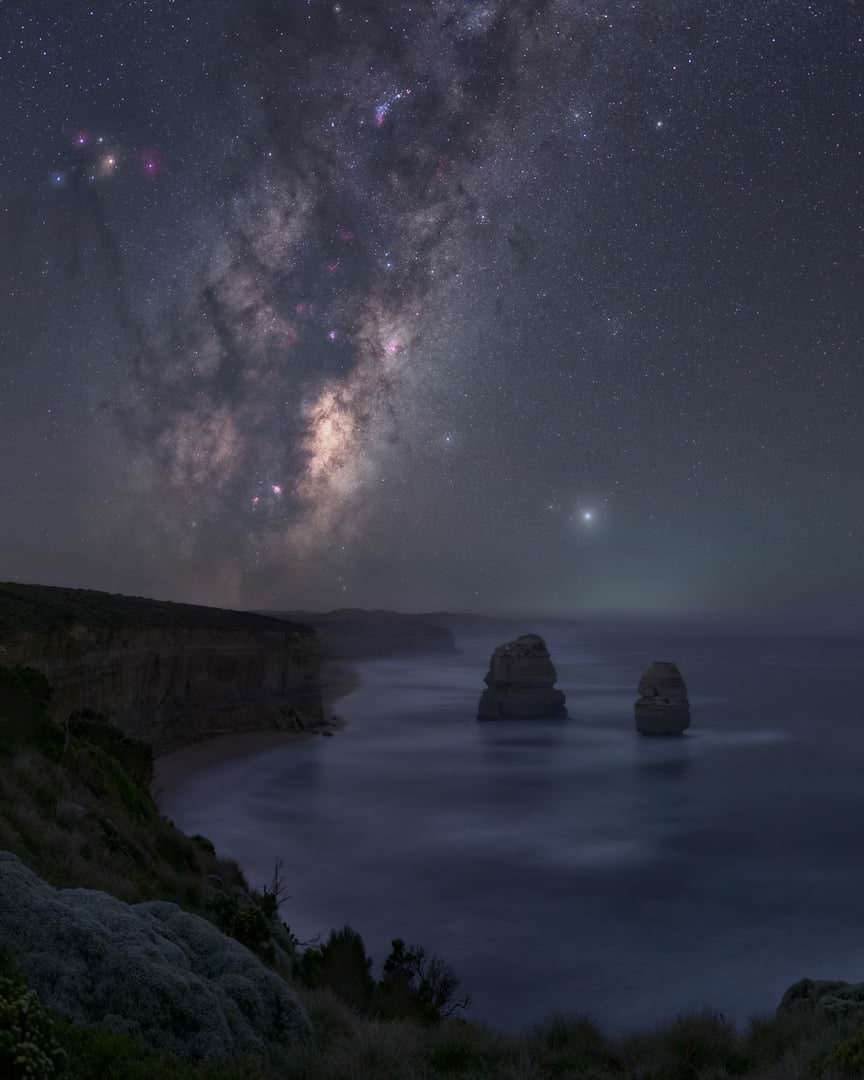 This incredible place had always amazed me, even before I had an interest in photography. This collection of rocks has been carved and shaped by the sea waves and strong wind that whips the south coast of Victoria. Undoubtedly, this area is the most important and symbolic landscape of Australia.

Jose Luis Cantabrana says  about his experience of recording this photo:

After a fantastic sunset and following ethereal moonset, I thought of a spot I’ve always dreamed of capturing under a magical starry sky. Although all was not rosy that night, I had brought a new device with me; A star tracker. As soon as I started setting up the tracker, I knew I was in for a rough night. After several failed attempts to align the tracker to the sky’s south pole, I was ready to give up; As the galactic core was emerging, I decided to take a picture to see what was happening. To my surprise, this image captured me beautifully and opened a new door for me to the magical world of stars. 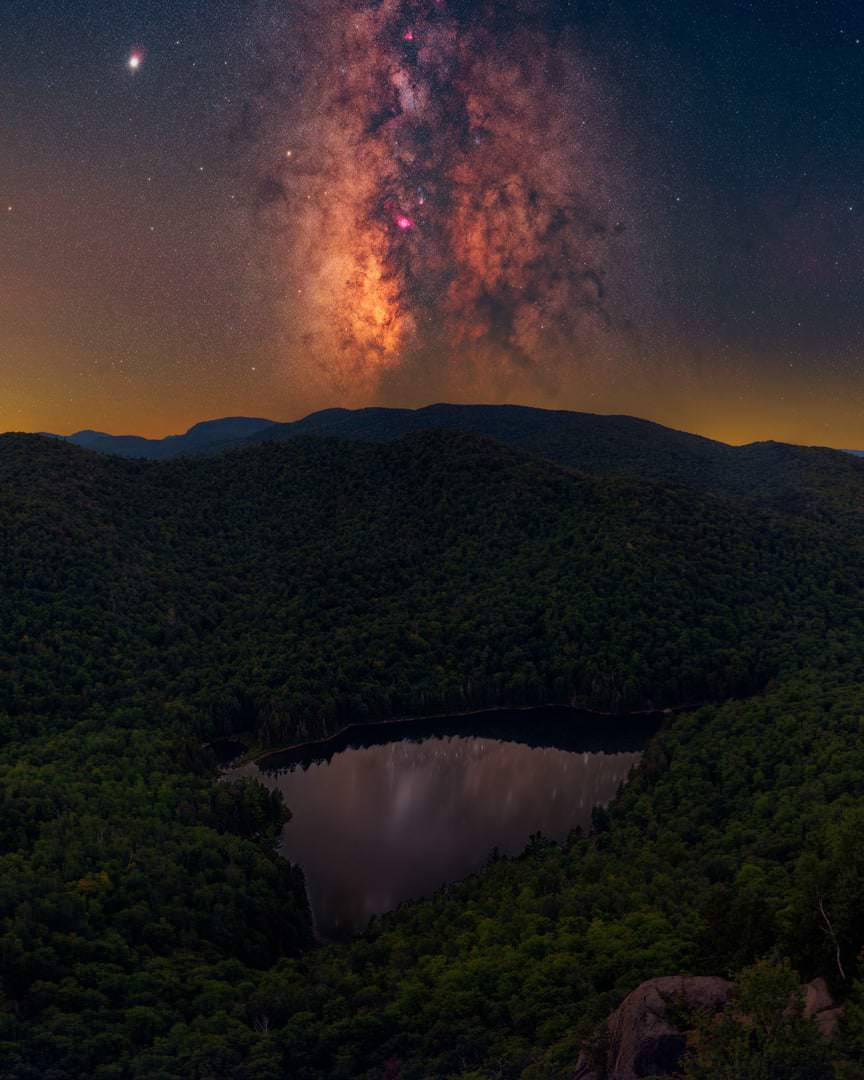 The east coast is less famous for shooting the Milky Way because of its dense population and heavy light pollution, But there are still some patches of dark sky left in this area. Located in southern New York, the Adirondack region includes 6 million acres of land known as “Forever Wild.”

Daniel Stein says about this area:

When I hike in Adirondack, I feel at home. This photo perfectly shows the magic I feel in my heart when I am in this place. Featuring a heart-shaped lake, this image shows what the East Coast has to offer: beautiful forested land with calm waters and rolling hills. My heart is in these mountains, and I am so grateful to be able to explore them. 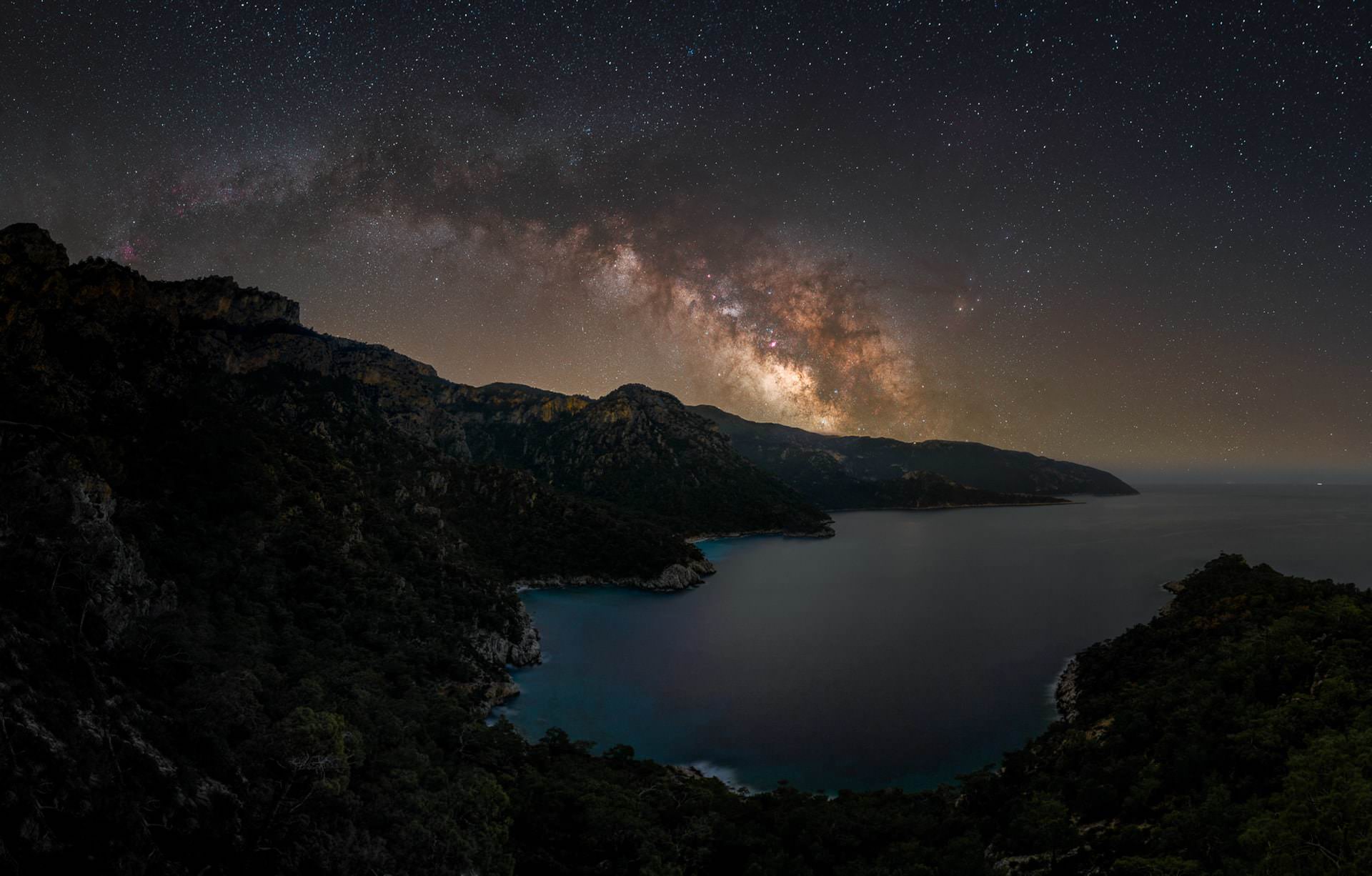 I spent the pandemic in a remote valley on the southwest coast of Turkey to escape the chaos, restrictions, and quarantine and instead be surrounded by beautiful nature. Since the core of the Milky Way rose in the southeast at that time of year, I had to climb mountains to get a decent view. Unfortunately, the valley I was in had steep walls from where only the west could be seen.

The route to this place is part of the Lycian Way, a popular multi-day hiking trail along Turkey’s stunningly beautiful coastline. This view overlooks a famous beach called “Cennet,” whose Persian translation means heaven, a name that looks quite graceful!

Sitting on the mountainside and enjoying the view of the Milky Way galaxy on the other side of the mountains while the sound of waves and awake owls could be heard in the valley, It was precisely the solitude and peace I needed.