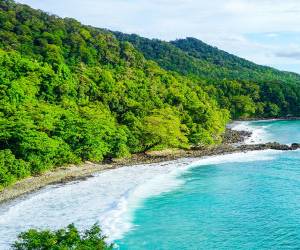 The Country Of Indonesia, With All Its Attractions, Including Pristine And Beautiful Nature, Can Be The Best Destination For Your Travels. This Country Is Full Of Beautiful Cities And Fantastic Mountains.

Sightseeing and tourism attractions in Indonesia

Indonesia is a beautiful country with many tourist attractions, excellent and spectacular nature, and a long history. Indescribable natural landscapes such as oceans, volcanoes, mountains, and hills can be seen throughout this country. In this part of tourism, we will introduce you to Indonesia’s most beautiful tourist attractions.

Tourist attractions of the beautiful country full of nature, Indonesia

Bromo volcanic mountain is located in Bromo Tengger Semeru National Park, which is one of the tourist attractions. This active volcano is located in the middle of a plain called the Sea of ​​Sand (Segara Wedi), along with several other mountains.

Local people of this area climb this mountain during Hindu festivals, and according to their customs, they pour flowers and food into the mouth of this mountain. Due to the frequent eruptions of this mountain, a stunning mountain landscape of sulfurous smoke has been created, one of the famous scenes for photography in Indonesia. 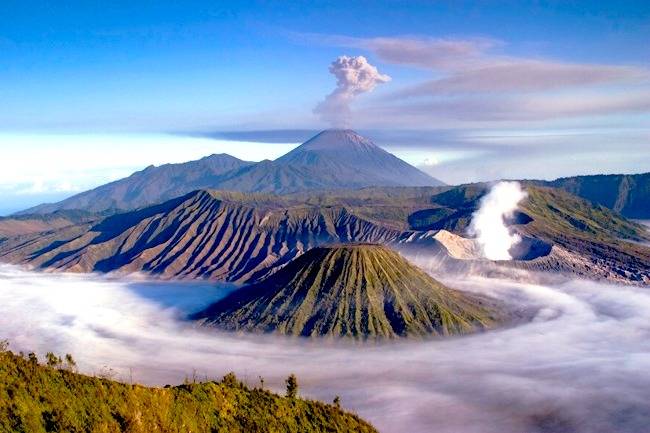 There is a park called Gunung Gede Pangrango National Park in the city of West Java, Indonesia, which has a pristine and beautiful nature. Different wild animals with other species are kept in this park.

One of the reasons that attract tourists interested in wildlife and nature to the beauty of this park is the preservation of these beautiful animals and birds and the pristine nature of this park. Fishing is also one of the local pastimes of this region.

Mount Pangrango and Mount Gede are located in the heart of the park. The incredible landscape of Mount Gede attracts people who are interested in climbing.

Viceroy Bali is a cozy place to relax and unwind, run by an Australian family.

Carstens’ pyramid is the highest peak in Indonesia, which belongs to Mount Jayawijaya in Papua, which is famous for its beautiful stone cliffs and because there is snow on it. Below this peak is a lake called Edenberg, which dries up and fills up again, and black swans can be seen on it.

This beach, which has pristine and beautiful nature, is like a peninsula that seems to hug a part of the beach. Viewing this beach is attractive both from below and from above.

With its beautiful nature, this plateau is located above the clouds, and it is the ruined place of old shrines that displays a stunning effect of history and character. Dying Plateau is a place to watch local ethnicities.

Kuban Suu, which means “thousands of waterfalls” in the local language, has clear and clean water that flows down from the rock. The pristine and beautiful nature of this waterfall and swimming in its lake has caused many tourists to go to this area.

Rinjani is the second volcano in Indonesia, located on the island of Lombok. There are twin waterfalls and flowing rivers around this mountain, which have given a lot of beauty to this mountain. 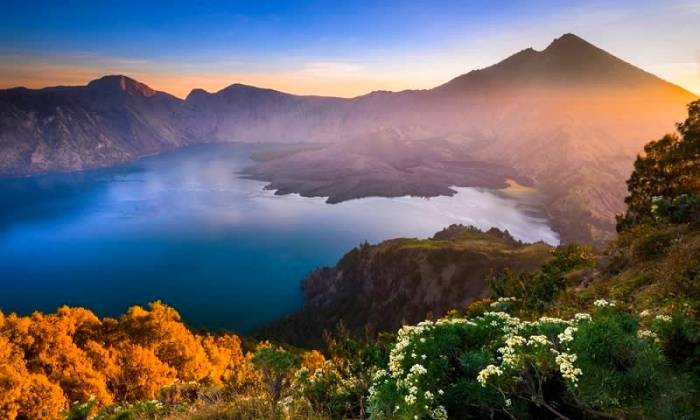 What is the most crucial attraction in Indonesia?

Due to the wide crater, the Ijen area also contains several other volcanoes, one of which is the Kawah Ijen volcano. This volcano is full of sulfur, so a blue fire appears when it burns, which is very enjoyable to watch at night.

Some people consider this mountain dangerous, but many tours are organized to watch the flames of this volcano.

A hotel called Alila Purnama is located on a real ship, which provides all the facilities for tourists in the ship’s rooms. This ship goes to Komodo Island, which offers visitors a fantastic view of the sea and surrounding corals.

Tegallalang Rice Terraces is located in Ubud. Due to the formation of layers and stairs, the rice fields are considered one of this region’s attractions and attract all people. Many painters and photographers visit this area every year to depict these beauties.

A famous shipwreck on the Tulamben rocky beach attracts tourists interested in swimming, snorkeling, and diving. As mentioned by the Namnak tourism department, there are beautiful sea creatures, turtles, all kinds of fishes, and beautiful corals on this beach due to the clean and clear water.

Bamboo Garden Hotel in Bali uses a combination of modern and traditional construction and is very beautiful. The wooden villas built a hundred years ago are the accommodation of the guests. There are very pleasant and peaceful natural gardens around this hotel.

The Mahayana Buddhist temple is one of the world’s most well-known and famous temples. There are 504 Buddha statues in this temple, which UNESCO protects.

Kakimoto is a volcanic mountain with small lakes on its summit. Kakimoto consists of 3 lakes, each of which has a different color, and their color changes from green to black as well as red, brown, etc., throughout the year.

These colors have different spectrums due to volcanic activities. It is interesting to know that one of these lakes has changed color 44 times during the century. 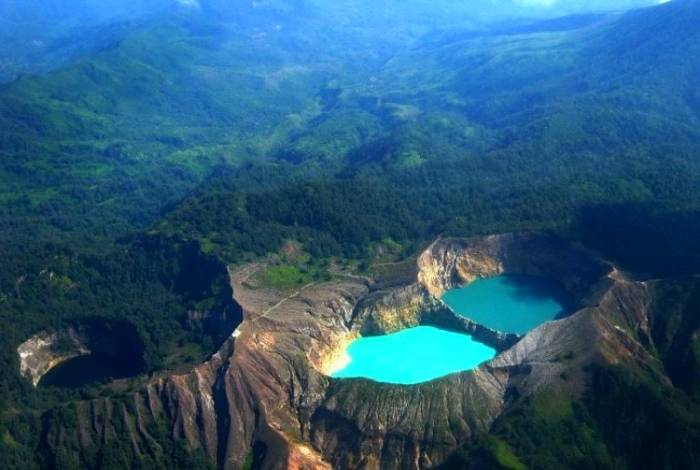 Attractions and places to visit in Indonesia

Beautiful and spectacular attractions in Indonesia

Raja Ampat Islands has about 1000 small islands with beautiful and remarkable scenery. With at least 500 species of corals and 1400 types of fish, including shark whales, coastal seahorses, etc., this is one of the most valuable places in the world for diving under the sea. The island has endemic birds, colorful wildflowers, and other domestic animals.

On Komodo Island, you can see hills, green covers, exotic beaches, and a clear blue ocean. This island is a habitat for the curious and ancient Komodo dragon.

The most beautiful cities in Indonesia

One of the most exciting and beautiful cities in Indonesia, as we have introduced in Nanak, is Bandung, located in West Java, known as the Paris of Java, and has beautiful nature and delicious food.

Similar to Jugja, Sulu is located in the center of Java. Sulu is a significant historic city that was the Mangkune Garan and Kazunana dynasty seat.

Malang’s clean, calm, and charming city in East Java was the seat of the Mataram dynasty. This city is culturally and historically rich and has many temples. Tea plantations, waterfalls, and beautiful mountains and beaches such as Bale Kambang, Anglia, and Sendang Biru are some of the sights of this area.

Batu is a beautiful hill town that is an agricultural center and is surrounded by impressive mountains and hills, one of these mountains is Gunog Banyak, which is the venue for national and international paragliding competitions.

Padang is one of Indonesia’s most beautiful cities, with many lovely restaurants and delicious food. Historically, this city has played an essential role for the Netherlands as a port city. 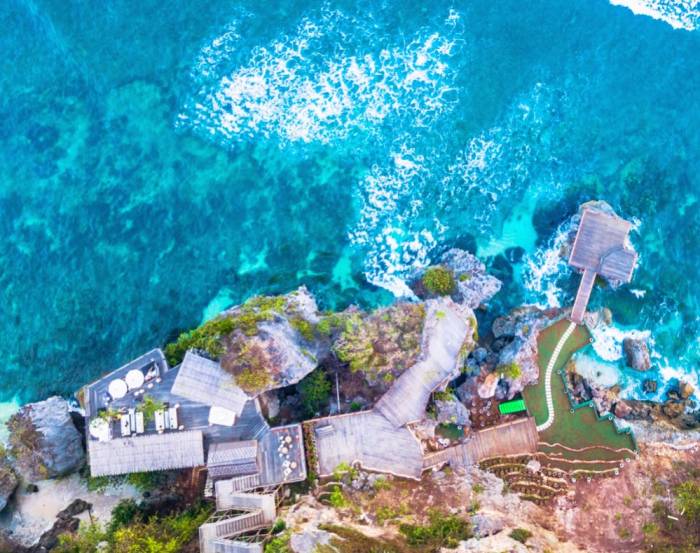 Ubud is a beautiful city located on Bali island, with terraced rice fields, and it attracts many tourists. This city is the island’s cultural center, and contemporary artists set up their galleries and studios in this area.

During the colonial days, Manado was the fortress of the Dutch and the place where the Minahasa people lived, and now its culture, tradition, and architecture have been preserved. The prosperity of this city is due to trade with the Philippines and other neighboring countries for a long time.

BakiteBakingingi is a small and beautiful city in West Sumatra. This small town shows the customs and traditions of Mining so that visitors can visit traditional villages with houses with Mining architecture.

One of the most beautiful cities in Indonesia is Yogyakarta, known as Jogja. Jogja is the main historical and cultural center in Java. Prambanan and Borobudur temples in this city will take you to the era of two great kingdoms, one Buddhist and the other Hindu.

A beautiful green city called Bogor is located outside Jakarta, where residents spend their weekends. Bogor is home to botanical gardens surrounded by tea plantations and Puncak mountains.