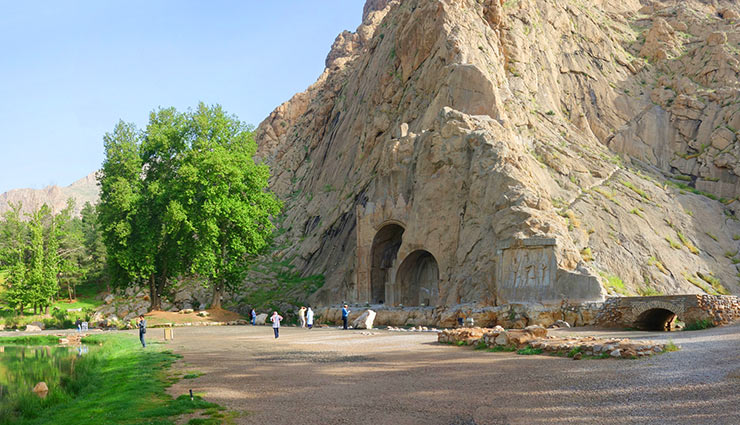 Kermanshah can be considered the most popular western province of Iran; The largest Kurdish city in Iran, from which historical and love stories and legends emerge.

If you have never planned to visit Kermanshah in your travel plans, you have lost the pleasure of watching an important part of Iran’s history and its beauties.

Introducing the best sights of Kermanshah

If you are planning a trip to Kermanshah, it is better to be aware of the list of its sights. If you have a variety of travel tastes, a trip to Kermanshah will be enjoyable and varied, because you can see the ancient and historical monuments in the corridors of the past years of Iran and then touch the nature of this region, see the pristine and boundless areas of the country.

1. Biston, the eyewitness of Farhad’s romances 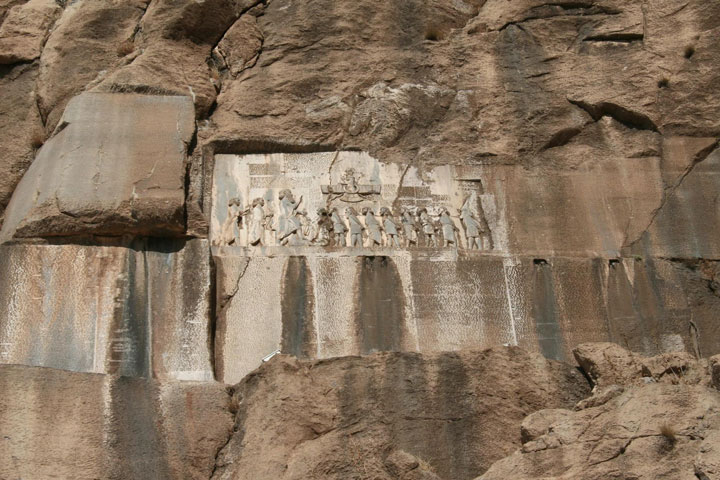 The idea of ​​a mountain being completely dug up and carved by a human might seem a little strange and unbelievable. But Biston has been registered as a man in love for hundreds of years. Farhad is a man who has been narrated about him and his love in poetic legends. Farhad climbed the Bistorn mountain to reach his sweet mistress and by order of Khosro Parviz (who was one of his sweet lovers).

The fact that this beautiful narrative is real or mythical can never prevent the popularity of this towering mountain in Kermanshah. To see this mountain, you have to be about 30 km away from the center of Kermanshah. Bistoon historical site is one of the most important sights of Kermanshah, which has an area of ​​about 1600 hectares. The Biston area includes various historical sections. Each of these sections belongs to a different historical period and has been discovered and preserved one by one over the years.

The inscription of Darius as one of the most authoritative historical documents is an inscription in which Darius mentions his kingdom and introduces the Achaemenid dynasty and his children. 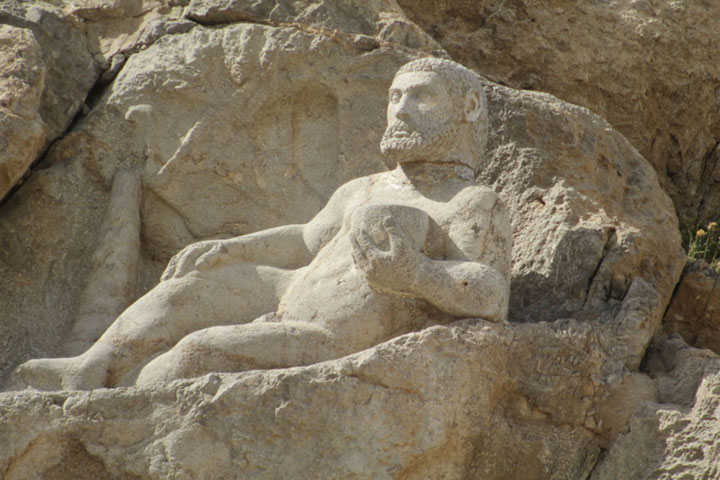 Hercules sculpture is another of these sections that can be considered one of the oldest Iranian sculptural arts. This famous statue is located on Mount Biston and depicts a strong man with a bent posture and a bowl in his hand.

Bernaj Tomb, Farhad Tarash, Caves and Biston Bridge are other historical attractions of this area. After this tour in the heart of history, you can sit in the green space of Biston and enjoy the view. 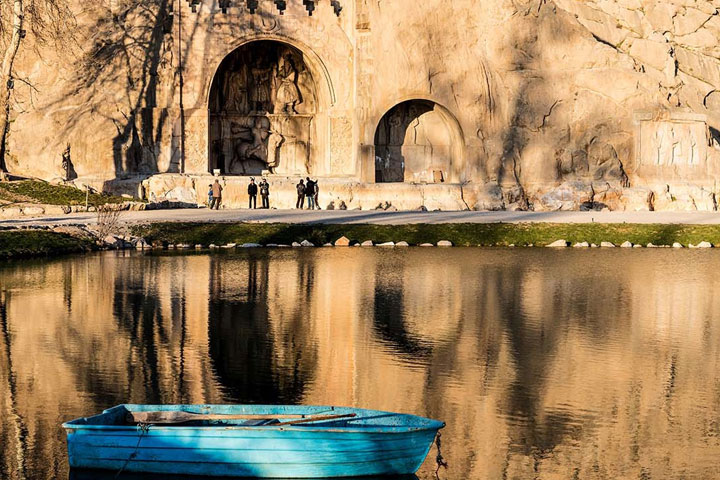 Perhaps it is not wrong to call Taq Bostan the most beautiful and spectacular tourist attraction of Kermanshah; An attraction that many non-Iranian tourists travel to this beautiful Kurdish city. Taq-e-Bostan is a collection of inscriptions and hand-painted shapes that date back to the Sassanid period.

Each part of this lithograph, like a painting, narrates a part of the events of the Sassanid dynasty. For this reason, it is of great historical and artistic value. Khosro Parviz lithographs, boar hunting scene and harpists and wind instruments can be considered the most beautiful lithographs of this unique collection. The perfect Sassanid carvings on the mountains have turned this part of one of the most important sights of Kermanshah today.

In front of Bostan arch, there is a clear spring, which also supplies water to the surrounding agricultural lands. By sitting by this spring and watching the handicrafts of the ancient Iranians, you will experience one of the most enjoyable parts of your trip to Kermanshah.

3. The reliance of the viceroy, the intersection of color and meaning 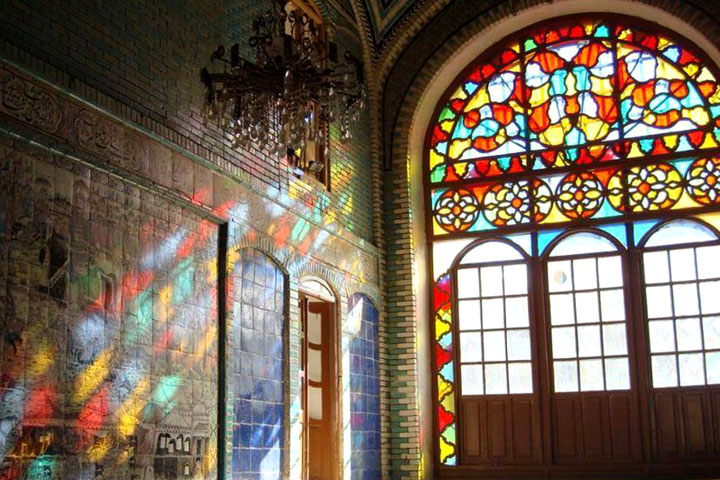 All you have to do is step on it so that the colors will live in your memory forever. The reliance of the Deputy Minister narrates the connection between art and spirituality. This support is considered to be the most beautiful support in Iran. This support was built in 1282. But his historical fate was not pleasant and he was set on fire during the constitutional protests. A few years later, Hassan Khan, the viceroy, with the help of the best painters and tilers, was able to build a pillar whose beauty is now popular with Iranian tourists. 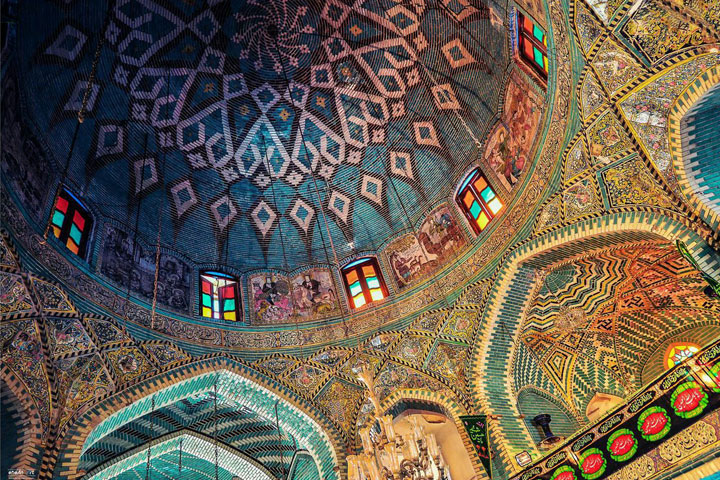 Takiyeh tiles narrate parts of the Shahnameh and in other parts depict the wars of the Prophet and Imam Ali. This illustration can keep you busy for hours, just like visiting a unique painting exhibition.

Plastering and the use of stained glass and wooden frames (so-called sash) have turned this building into a rainbow of Iranian art.

Kermanshah museums in the heart of the Deputy Minister

Historical documents and the type of architecture of the building indicate that this reliance was once the residence of travelers. The small, square rooms around the main courtyard also confirm this narrative. Today, some of these forums have found another use. Kermanshah museums are one of these sections. 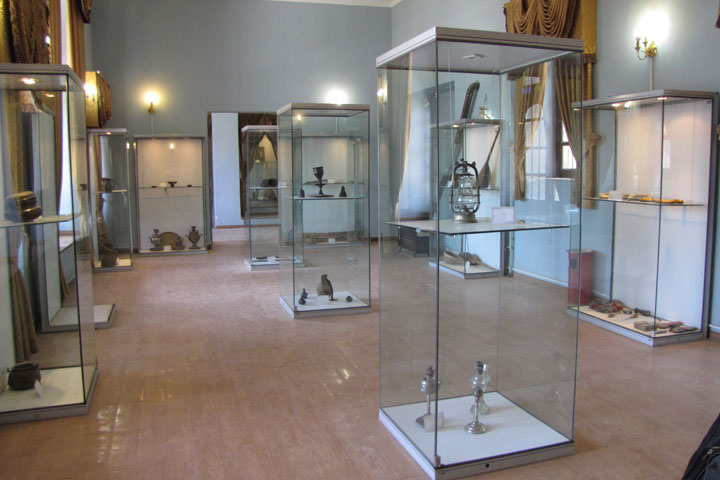 This museum displays the culture of the people of Kermanshah and the Kurds of Iran. Local music instruments, various occupations of the people from the past to the present, agricultural implements and writing instruments are the most important objects of this collection. In addition, many of the objects discovered during the history of Kermanshah are in this museum.

Kermanshah Museum of Clothing and Jewelry 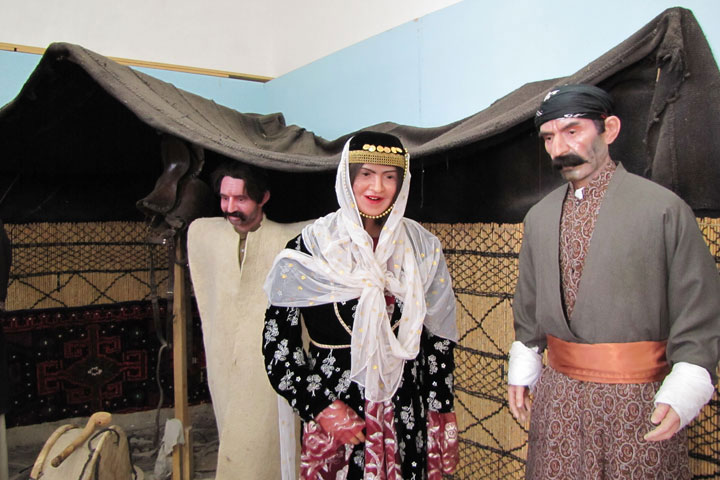 If you want to end your visit by seeing the colors after seeing Tekiyeh, be sure to visit the Kermanshah Clothing Museum. This museum is located in the Abbasiyah section of Tekiyeh and displays clothing from different areas of Kermanshah. Part of this museum is dedicated to the display of handmade jewelry by people in different cities of Kermanshah.

4. Mirage of the scene, a touch of beauty in the heart of nature 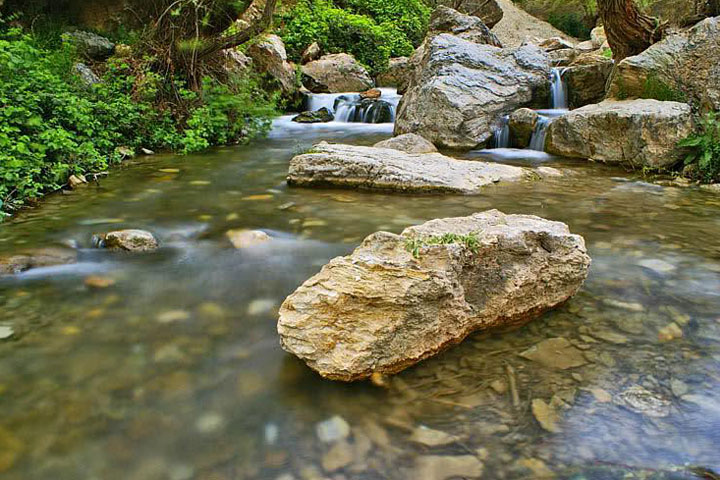 An important part of any trip is getting to know the nature of the area and seeing the natural beauties of the city. Kermanshah, due to its special geographical location in the foothills, shows the most beautiful nature in front of you. Sarab Sahneh is one of the most important natural areas of this section. Sahneh is about 55 km from Kermanshah and to reach Sarab Sahneh, you have to drive from Kermanshah for about an hour.

This region is considered to be the most pleasant part of Kermanshah. Located at the foot of the mountain, crossing permanent and seasonal rivers and orchards, Sarab Sahneh has become one of the most popular places in Kermanshah. In recent years, due to the popularity of tourists in this area, many amenities such as artificial lake, pavilion, restaurants and toilets have been added to this area. 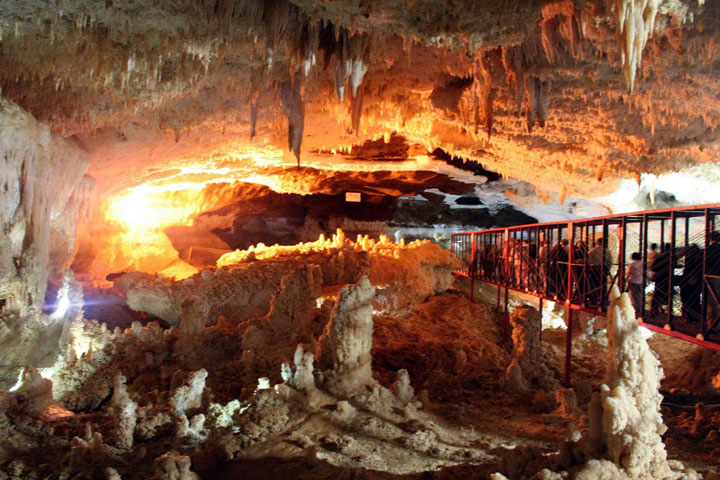 Qori Qala Cave, also known as Qori Qala in Kurdish, is an attraction dating back millions of years. This cave is considered to be the largest blue cave in Asia; So, don’t miss it. The teapot is about 2 hours away from the center of Kermanshah and is located 25 km from the city of Ravansar. This limestone cave is so deep that it has been divided into different halls. These halls include Maryam Hall, Kohan-e-Shtar Hall, Barzakh Path Hall, Bloor Hall and Arous Hall, the maximum area of ​​which is about 1400 meters. Qori Qala Cave is one of the seven natural-national monuments that have been registered in UNESCO. 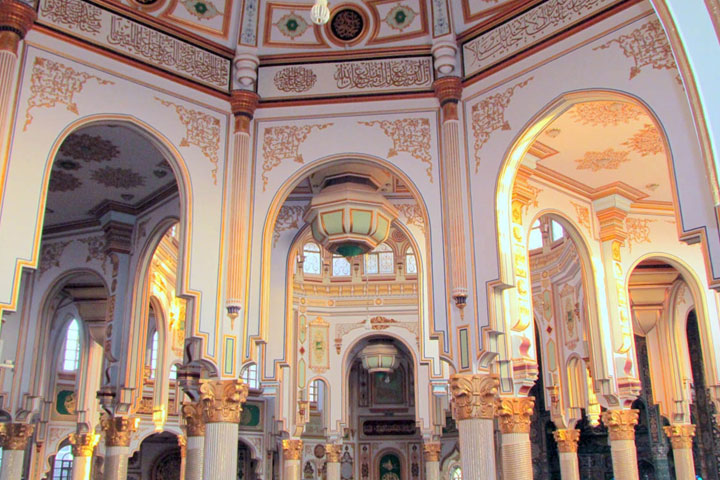 It is the most beautiful Sunni mosque which is located in the order of Kermanshah bazaar. The architecture of this mosque over time became one of the most original and beautiful architecture in Iran and today, in addition to Sunnis, it is also a popular mosque for tourists. Tall columns, different beds and large and integrated scenes have made an amazing building that has become one of the most beautiful places in Kermanshah today. 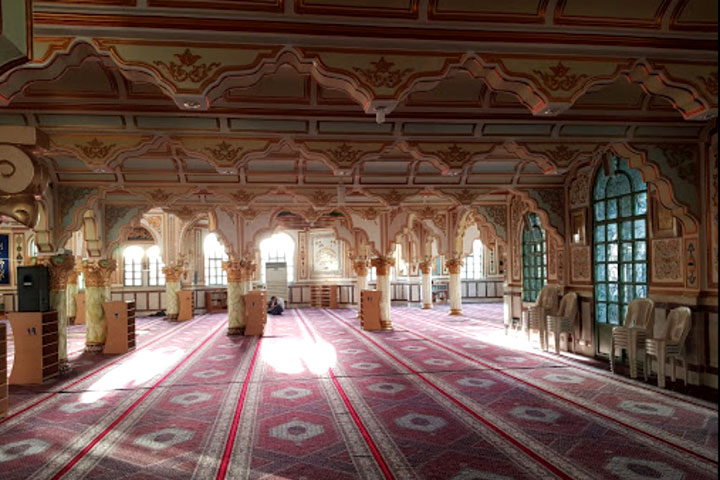 Today, a building influenced by Turkish mosques has been built next to this mosque, which is a place of Sunni prayer.

7. Bostan Arch Boulevard, the most beautiful boulevard in the city 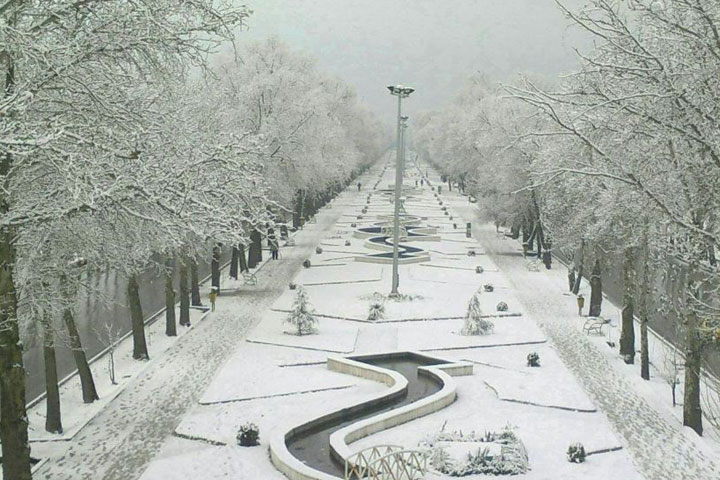 If you want to walk and breathe in the air of the beautiful city of Kermanshah, the best offer is a tour of Taghobestan Boulevard. This boulevard is the longest forest boulevard in Iran, which has its own beauty in each season. 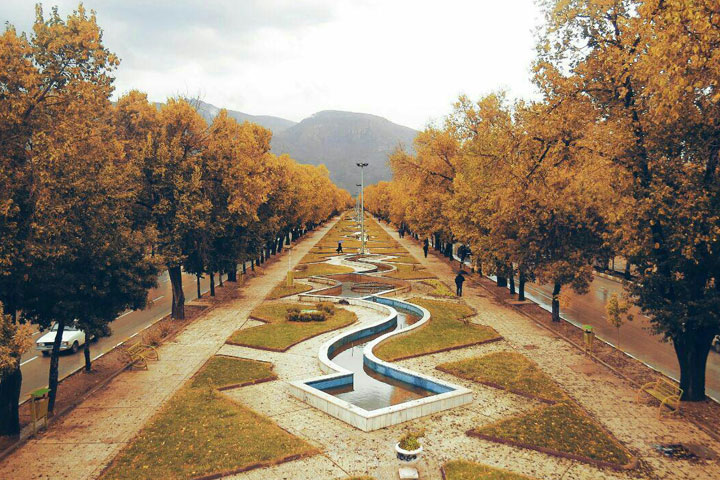 This boulevard is a place for walking , sports and cycling in the evening. Photography in this boulevard can record a beautiful memory of your trip to Kermanshah.

8. Flower Garden, the most colorful attraction of Kermanshah

Kermanshah is the second city after Isfahan to have a beautiful and large garden called the Garden of Flowers. This garden is located in an area of ​​5 hectares in front of Sina Hospital and is one of the most beautiful places in Kermanshah. 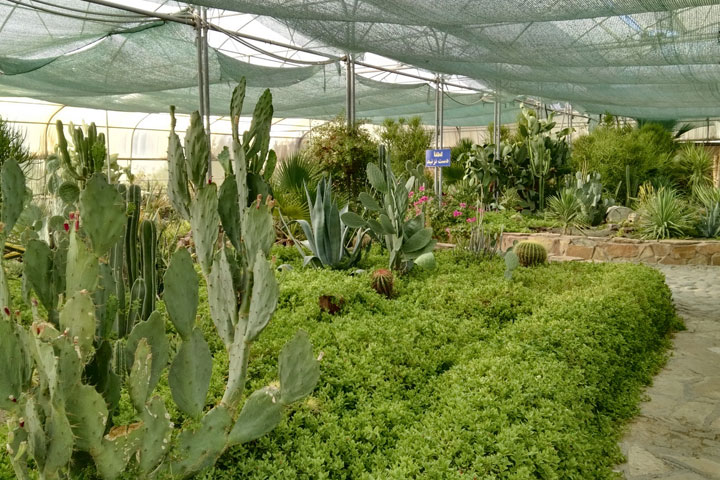 There are four sections of Persian, French, Japanese and Italian gardens in this garden and more than 4,000 types of plants can be seen in it.

9. Graveyard, the footprint of history in the heart of the mountain

The burial mound can be considered as a kind of architecture; A place built to prevent damage to cemeteries in the heart of the mountain and a place for burial. Burial mounds are more common in older cities. Kermanshah is one of these cities. In the following, a number of these burial mounds in Kermanshah are mentioned. 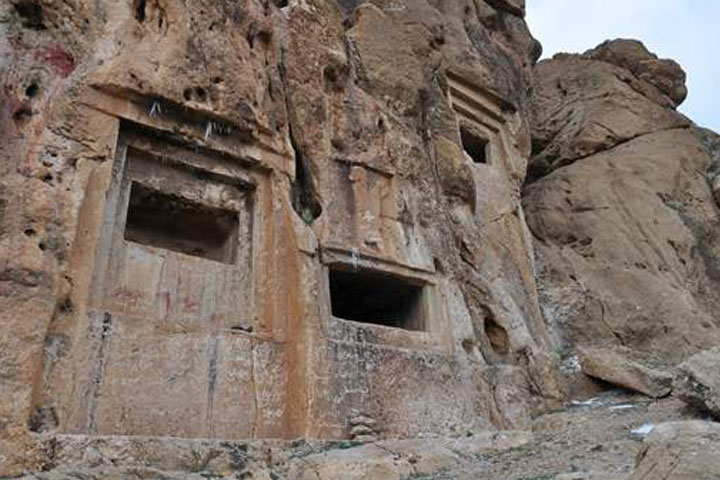 If you look at the mountain from below, you will see three regular rectangular holes that look like windows. These cavities have in fact been burial mounds or burial places of people in different historical periods. Ishaqvand burial ground is one of the most famous sights of Kermanshah, which according to the history, has been a place for burying the dead since the time of the Medes. This mausoleum is located near Hersin and around it, beautiful historical carvings can be seen.

Mortuary of the scene, the tomb of Shirin and Farhad 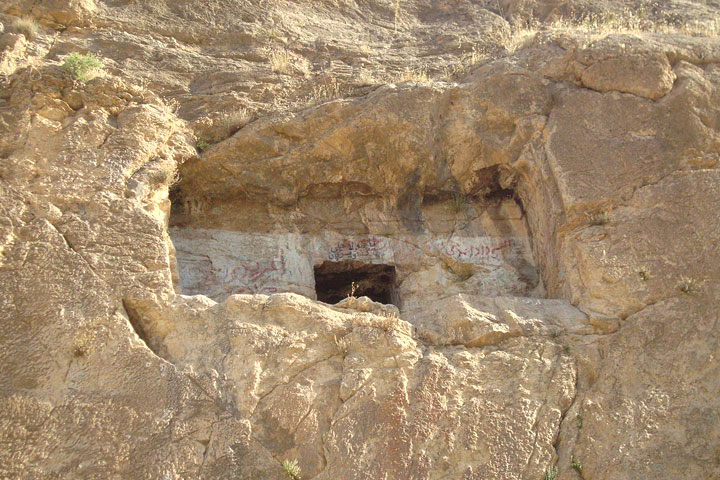 Another of the oldest and most important burial mounds in Iran is located in the body of Shoghali Mountain near the city of Sahneh. This tomb is built at an altitude of more than 50 meters above the river and above it the image of the winged sun can be seen. Historical narratives consider this tomb to be the tomb of Shirin and Farhad, as well as the burial place of Kikavous.

Davood’s burial mound, the burial place of the Achaemenid dynasty

This mausoleum was dug three kilometers from Sarpol-e Zahab in the heart of a huge rocky hill and is the burial place of the leaders of the Achaemenid dynasty. Of course, the reliefs around this tomb are not unlike the carvings of the Medes, but historical research has not found traces of the Medes in this area. For this reason, some believe that the Achaemenids imitated the Medes and carved these motifs in the heart of the mountain.

Our vast land is full of beautiful and different natural and historical sights. Visiting these beauties is also the share of generations after us. Protect this valuable heritage.