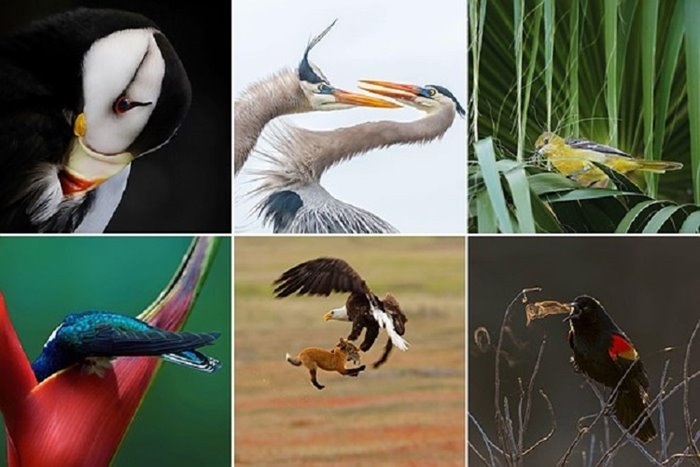 The National Environmental Society Audobon Has Just Announced The Winners Of The 2019 Photography Contest By Publishing Beautiful Pictures Of Birds.

The National Environmental Society of Audubon has provided a complete list of selected images of this contest on its website. In this article, we have collected the most beautiful and spectacular ones. Zoom in to view breathtaking photos of birds.

Top photo: The grand prize winner of the contest 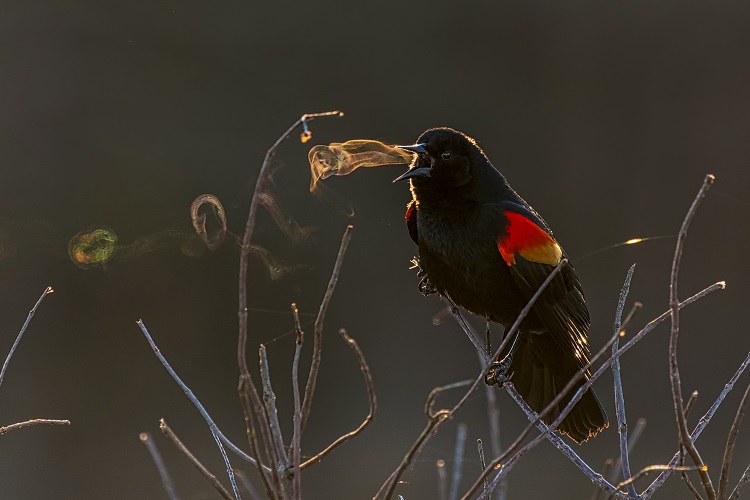 I would go to the park near my house on cold winter mornings to photograph the ring of heat from the blackbirds’ mouths when they sing. One of these icy mornings, when the sun had not yet risen, the song of one of the blackbirds filled the entire park. I followed the sound until I reached a bird that, while beautiful, was singing loudly. Seeing this scene, I set the camera to the dark side of the park, where the sun was rising above the trees, so I could capture the steam coming out of the bird’s mouth.

The red-winged blackbird is a beautiful, finger-like bird abundantly seen in North America. The male species of these birds can be seen in the early spring on swamps, marshes, wet fields, and roadside streams, waving their red wings and shouting their presence in that area with their beautiful song.

Selected photo: the winner of the amateur photography category 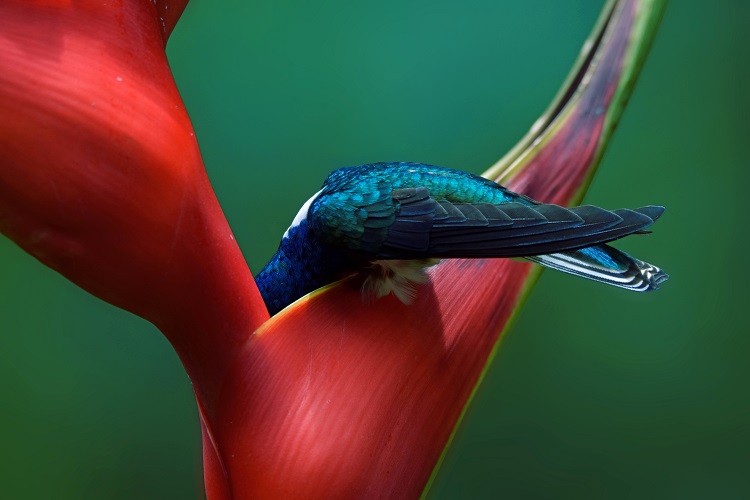 The story behind the photo from the photographer:

I always went to a specific peak for hiking in Costa Rica. On my fifth trip to this country, I accidentally changed my destination and drove toward the regenerating forests. After arriving at this area, I spent an hour photographing a large group of white-necked vultures drinking nectar from Heliconia plants. In the place where I was photographing, The weather was so stormy that it was hard to breathe.

The white-necked goshawk is a beautiful and large species of the hummingbird family. Most of the birds of this species are limited in their habitat, But the white-necked vulture can be seen from southern Mexico to southern Brazil due to its high adaptability to the environment. 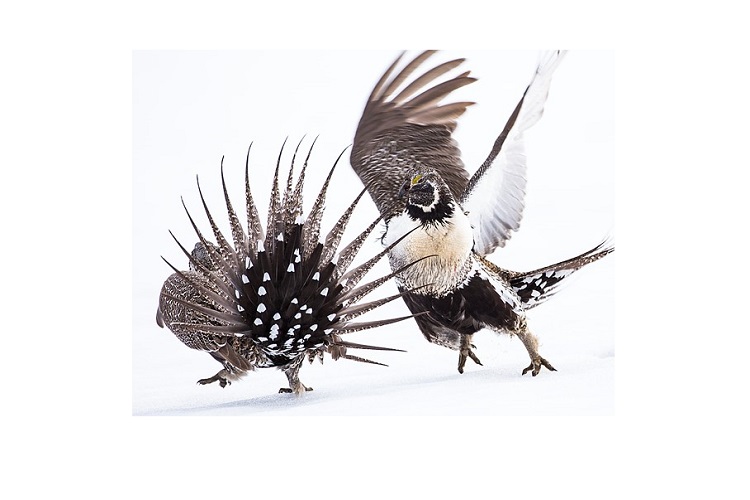 The story of the image from the photographer’s language

Many cold mornings, I have stood in the corner of the breeding grounds to photograph black grouse. During this time, I witnessed many fights between the males of these birds over the ownership of the females. These birds sit together and wait for invisible clues and suddenly jump at each other and hit each other. This picture, taken on a snowy day, depicts the power they exert to obtain a mate.

If you walk around the habitat of these birds, you will see that most of the birds in that place are male. Some male black cocks are stronger than others. If you wait for a little, you will see that the females will gradually come to the presence of the males and choose the strongest black roosters as their mates. However, it can be predicted that the next generation of these birds will have more physical strength than the previous generation. 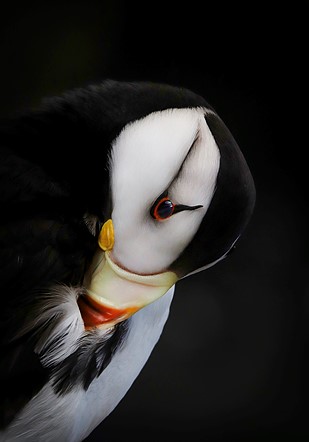 The story of the image from the photographer’s language

While traveling in Europe, I saw horned and ringed puffins for the first time from afar. After that, I wanted to see them up close to capture a beautiful photo of them until I got the opportunity at the Alaska SeaLife Center. Amid the hustle and bustle of birds swimming or fishing or flying past me at great speed, I waited for hours to catch a beautiful sight of sea parrots. Finally, I captured this photo of a solitary sea parrot. This sea parrot sat in a corner to groom its wings with its beak.

Unlike ringed puffins and Atlantic puffins, which dig small tunnels in the soil to build their nests, horned puffins often hide their eggs in deep rock crevices. For this reason, it is more challenging to investigate and recognize the nest of this species of sea parrot than other species, and there is not much information about their reproduction and habits.

Top photo: Winner of the plant and bird photography category 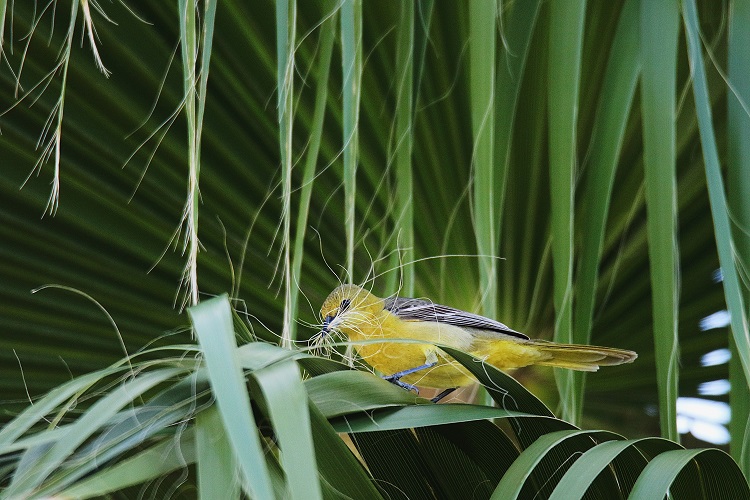 Not long after I moved to San Diego, I noticed a pair of hooded fairies that came to my yard every day and sat on a palm tree. When I saw the female moving thin palm threads to build a nest, I quickly took my camera and recorded this photo. I love this photo; it shows the profound relationship between two types of nature and depicts the beauty of the natural world, even amid urban life. Also, the glow of the palm branches in the background of this image gives a special sanctity to the labors of this hooded prince. 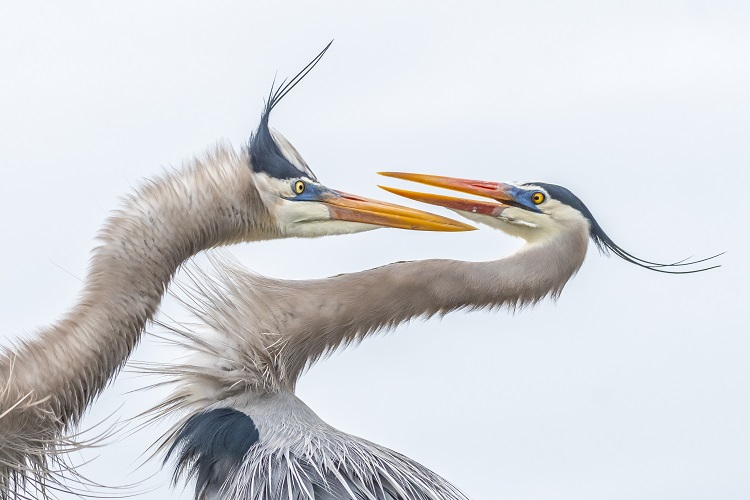 The herons immediately caught my attention as a storm was forming on the horizon in Wakodahatchee Park. Their mating ritual was so beautiful that I watched it for a few hours. The male heron, seducing the female heron, made an incredible sight. The approach of the male herons to the female was accompanied by the roar of thunder in the distance, and the strong wind blowing caused the feathers of these two herons to be in shape. At that moment, I took my camera and recorded this enchanting scene.

With its powerful neck and spear-like beak, the great blue heron can hunt its aquatic prey quickly. Also, adult herons attract the attention of female herons with their quick display movements in the air. The important thing about these movements is that male herons announce their need during the mating season with these dangerous movements. 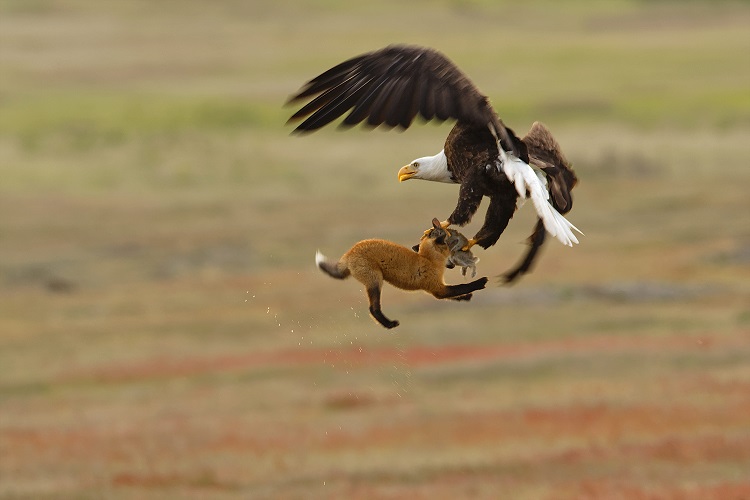 That day, I went to San Juan Islands Park to photograph foxes. Following the fleeing prey, a loud cry caught my attention. As I discovered, the eagle in our story had overtaken the fox in hunting the rabbit and stolen it from its mouth. The white-headed eagle caught the fox in its mouth and dragged them 20 feet to the ground, and after eight seconds, the fox fell to the ground and lost its dinner that night. I only had a few seconds to capture this masterpiece theft in one frame.

A bald eagle eats almost anything it wants. Maybe his interest in eating dead meat will reduce the grandeur of his kingdom, But it is still considered one of the mighty hunters and fast thieves in nature. The bald eagle hunts a wide range of birds, fish, and mammals, But he is not afraid of stealing other people’s catch either. 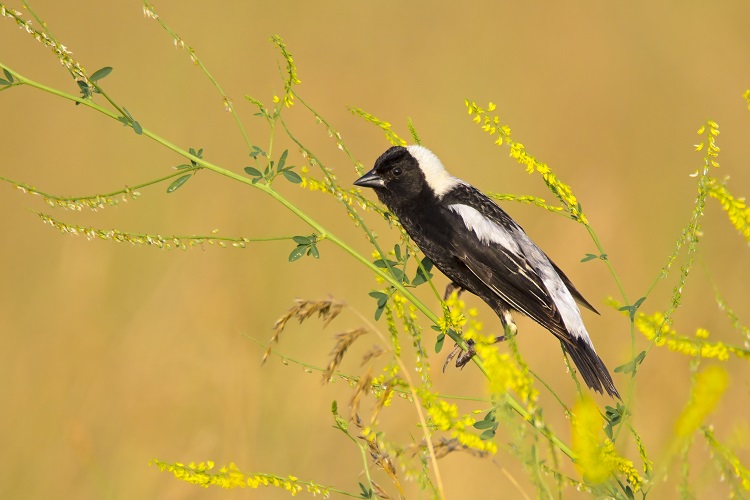 The plateau of Dunn Ranch turns into a beautiful golden meadow at sunset. The male rice eater that you can see in the photo sat for a moment on the stem of one of these grasses in front of my camera lens so that I could capture its beauty. Although I was very excited to take this photo, I took a few more pictures before the rice eater jumped, and the beautiful view disappeared. The robot-like sound of this rice eater was combined with the sound of other rice eaters in that area, and it made me experience an unrepeatable peace.

Most of the songbirds that live in the United States and Canada are considered to be migrants that are close to these areas. The rice eater is an exciting exception that starts its migration in the autumn season from North America and ends in the middle of the winter season near the southern part of the equator and South America. Interestingly, rice-eaters molt before migration, and their ornamental summer feathers give way to brown feathers. 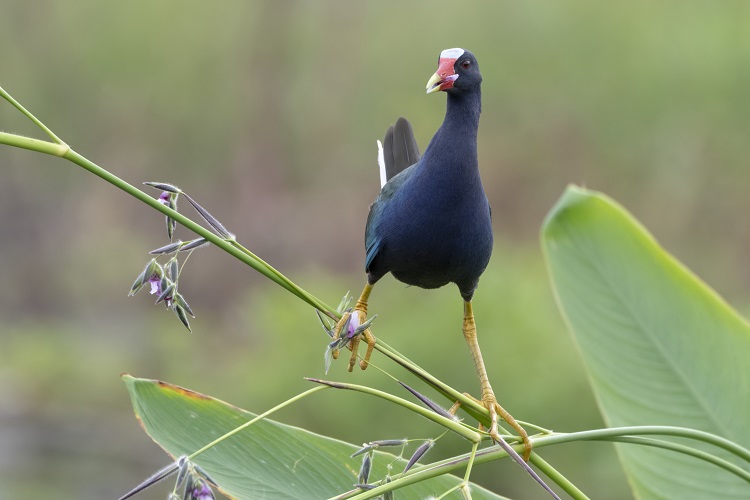 The purple gallinule usually climbs the plant at sunrise to feed on its flowers. I discovered this when I went to the Circle B Bar conservation area mid-morning to photograph and saw a purple gallinule climbing a plant and feeding on the flowers as it walked. Seeing this scene, I quickly took my camera and monopod and waited to capture the beauty of this scene at the right moment. When the purple gallinol reached the top of the plant, it began to move from stem to stem, up and down, and from side to side. I photographed all these moments, and finally, I chose this image which was the most beautiful of them all.

Purple gallinol is almost a combination of all types of gallinols. This species of gallinules skilfully swims and dives in open water, and they also use their shiny yellow legs to cross difficult paths between rocks and even climb trees to find food.