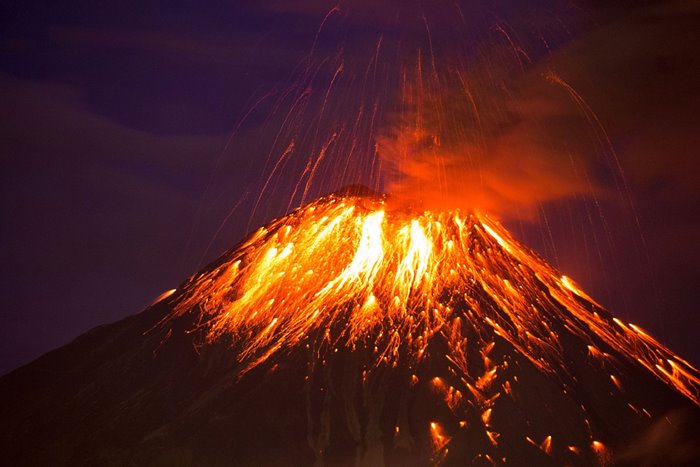 Super-Eruption Or Violent Eruption Of Volcanoes Is A Potential Danger That Has Been Neglected And Can Have Disastrous Consequences For Human Civilization.

Even if a man does not destroy his civilization with climate change or war, he is still threatened by other dangers. Earth is a source of long-accumulated hazards, some of which are hard to explain.

Asteroids are one of the potential dangers for the Earth, and a clear example is an asteroid that killed the dinosaurs 65 million years ago. As a result, the cautionary tale of dinosaurs shows us that we should be more careful.

Humans can prevent such a disaster by investing in technologies such as monitoring or destroying an asteroid; However, in an article published in the journal Nature, researchers say that preparing for asteroids should not cause us to neglect the danger that is right in front of us.

In the next century, large-scale volcanic eruptions are hundreds of times more likely than asteroid or comet impacts.

Global governments and organizations spend millions of dollars annually to defend the planet. For example, we can refer to the new test of the United States to dispose of space rocks. Although preparing for asteroid impacts is prudent, humanity has done little to deal with more likely hazards such as supervolcanic eruptions.

NASA’s Dual Asteroid Redirection Experiment (DART) is dedicated to deflecting asteroids by deflecting them off course. The cost of this mission is estimated at 330 million dollars. Although it could benefit the Earth if successful, no comparable investment has been allocated to prepare for supereruptions.

Volcanoes may not be as attractive as space fireballs, but there are many reasons why they are essential. Unlike asteroids, volcanoes are located on Earth. They are also scattered all over the planet and surround the landscape with their destructive potential.

On the other hand, humans have witnessed many catastrophic volcanic eruptions in the modern era, most of which are minor compared to supereruptions that occur every 15,000 years. According to the US Geological Survey, the last supereruption occurred nearly 22,000 years ago.

A supereruption usually occurs with a magnitude of 8, the highest in the Volcanic Eruption Intensity Index or VEI.

The most recent magnitude seven eruptions occurred in 1815 at Mount Tambora in Indonesia, killing approximately 100,000 people. The ash and smoke from this eruption lowered the global average temperature by almost one degree Celsius, making 1816 the year without a summer. During this period, a large part of the products was lost, resulting in famine, disease outbreaks, and violence.

The population of the Earth has increased eightfold since the 1800s, and some large urban areas are located near dangerous volcanoes. Monitoring of volcanoes has improved since 1815, leading to increased support for post-disaster recovery efforts, but this monitoring has not reduced the real risk we face today. Today, humans are more dependent on global trade, and a disaster in one place can lead to a reduction in food resources and other crises in other parts of the world.

The danger of volcanoes may be more than we think.

In a 2021 study based on data from ancient ice cores, researchers estimated the intervals between catastrophic eruptions to be hundreds or even thousands of years shorter than previously thought.

The history of many volcanoes is in an aura of uncertainty, which is why it becomes more difficult to predict future eruptions and focus on high-risk resources; Therefore, should more research on ice cores as well as geological and historical records such as lake and sea cores, especially in high-risk areas such as Southeast Asia.

We also need interdisciplinary research to help us understand the impact of supereruptions on the collapse of civilizations.

According to the researchers, volcanologists need a specialized satellite to monitor volcanoes that will increase disaster preparedness beyond the current satellite systems shared with other scientists.

Public awareness and literacy are other critical point to increasing resilience against volcanic disasters. People who live in volcanically dangerous areas should be aware of the risks and how to prepare for an eruption.

In case of volcanic eruptions, the responsible authorities should warn people through the media and text messages and share tips for survival after the disaster or orient shelters and health care facilities.