The Queen Of Crypto, Dr Ruja Ignatova, Has Disappeared After Raising A Huge Billion Dollar Investment In The One coin Ponzi Project. In This Article, We Examine The Story Of His Case.

According to newly published documents, the chaos of the cryptocurrency market has also caused a considerable loss to one of the most prominent potential investors of Bitcoin; She is none other than the lost crypto queen, Dr Ruja Ignatova.

The missing fraudster suddenly disappeared in 2017 (1396 AD). Rocha Ignatova is wanted in the United States on fraud and money laundering charges and is among the top 10 wanted persons of the US Federal Bureau of Investigation (FBI). When his cryptocurrency, OneCoin, was in its heyday and had collected billions of dollars in capital, there has been no news of him until now.

The educated entrepreneur, who claims to have a doctorate from Oxford, had told his investors that he was launching a project called OneCoin to counter Bitcoin and dubbed it the “Bitcoin Killer”; But the obtained files indicate that the mastermind of the Bitcoin killer secretly converted billions of dollars of his victims’ capital into Bitcoin, a rival cryptocurrency, before disappearing. 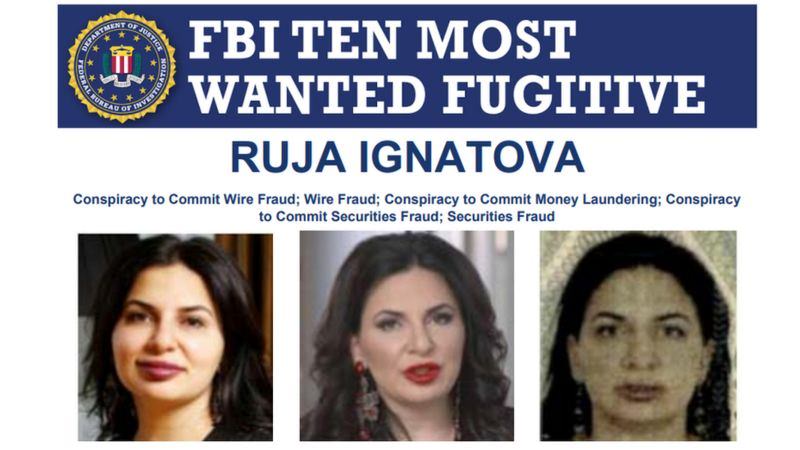 The first details about this came in 2021 (1400 AD) through leaked documents from a court in Dubai, which were published online by a lawyer. They identified Rozha Ignatova as “the most successful fraudster in history”.

Dr Jonathan Levy is the person who first published the so-called Dubai Files online. “Hundreds of millions of dollars are at stake,” he says. Mr Levy is also in charge of representing the victims of the OneCoin project to receive compensation. He further mentioned that he received more than thousands of documents, mainly in Arabic, from a whistleblower regarding the case of the missing cryptocurrency queen. The whistleblower told Mr Levy that he was adamantly opposed to the unjust enrichment of some people in Dubai.

According to the disclosed information, Dubai is considered one of the critical financial channels for Dr Ruja. In such a way, the FBI mentions the United Arab Emirates among the five countries with which Dr Ruja was in contact.

It is worth noting that only a part of the information and documents known as the Dubai files, in this case, have been verified in terms of validation, and some of them are still not considered preferable. They are considered to lack any legal and judicial validity.

In addition to the billion-dollar fraud at the international level, this case had become a global concern due to the presence of Mrs Ruja Ignatova in five different countries before she disappeared; However, a lawsuit to pay compensation to the losers of the OneCoin Ponzi project is being pursued in the High Court of British Indian Ocean Territory, because the domain of the OneCoin website is hosted in this region. 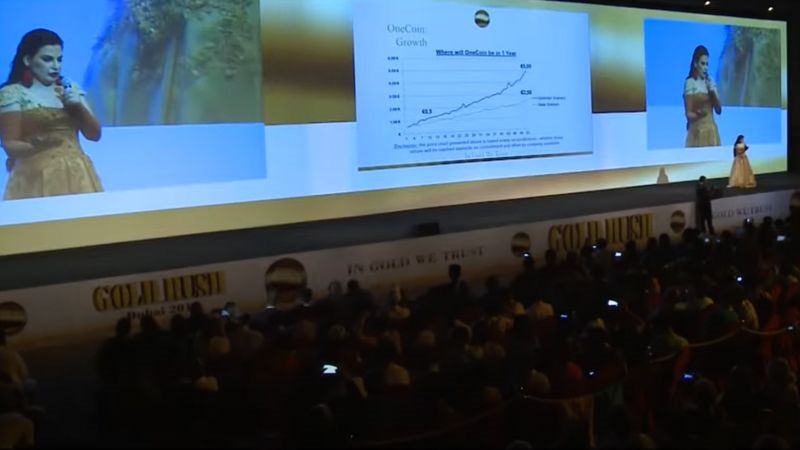 Dr Ruja Ignatova at the OneCoin event in Dubai in 2015; the OneCoin project had an official office in this city.

The most crucial claim raised in Dr Levy’s legal case, which highlights the connection between Dr Ruja and Dubai, refers to a significant bitcoin transaction between one of the royal figures of the UAE, Sheikh Saud bin Faisal Al Qasimi, the son of one of the country’s wealthiest business people, and Dr Ruja Ignatova.

In the legal case disclosed in Dubai files, it is stated that in 2015, Sheikh Saud gave four USB flash drives containing 230,000 bitcoins, which at that time were worth 48.5 million euros, to Dr Ruja.

According to the documents, before completing the transaction, Mashreq Bank of Dubai began freezing Dr Ruja’s accounts due to money laundering concerns; Therefore, the received checks were not cashed.

In 2020 AD (1399 AD), the Dubai authorities released the funds from Dr Ruja’s accounts. This action came when the US Department of Justice indicted Dr Ruja a year earlier for the crypto-fraud Ponzi project OneCoin.

On the other hand, several months before the release of Dr Ruja’s account funds, Mrs Ignatova’s former financial manager, Mr Mark Scott, was also tried in a court in New York for the crime of money laundering for the amount of 400 million dollars from OneCoin’s earnings. The court found him guilty. According to the evidence against him, he was sentenced.

Despite the inquiries of the official news agencies about the reason for the release of funds from Dr Ruja’s accounts, the public prosecutor of Dubai has not responded, and some interpret this silence as meaningful.

According to the Dubai Court of Appeal records, Sheikh Saud requested that Dr Ruja’s bank account funds be handed over to him on April 28, 2022. Therefore, one can see signs that such a big deal has been going on between these two since the beginning, and they cannot completely deny its existence. In addition, even though Dr Ruja has not been seen in public for nearly five years, in this case, Sheikh Saud is named as the defendant, doubling Dubai’s sensitivities.

Unfortunately, not much information is available about Sheikh Saud, and according to sources, Sheikh Saud rarely appears in public. In 2017 (1396), he was featured in a video from an organization called the Intergovernmental Collaborative Action Fund for Excellence, which claims to support educational initiatives. Before the disclosure of the “Dubai files”, communication between the ICAFE organization and Sheikh Saud was recorded; however, with the release of the Dubai files, she removedSheikh Al Qasimi’s name as the Secretary-General of the ICAFE Organization from the official website of this group.

It is also important to mention that a cryptocurrency project was recently launched and introduced. Sheikh Saud is the chairman of the board of directors. However, the Dubai files reveal an undisguised truth about the close connection of the Al-Qassimi family with Dr Ruja Ignatova. 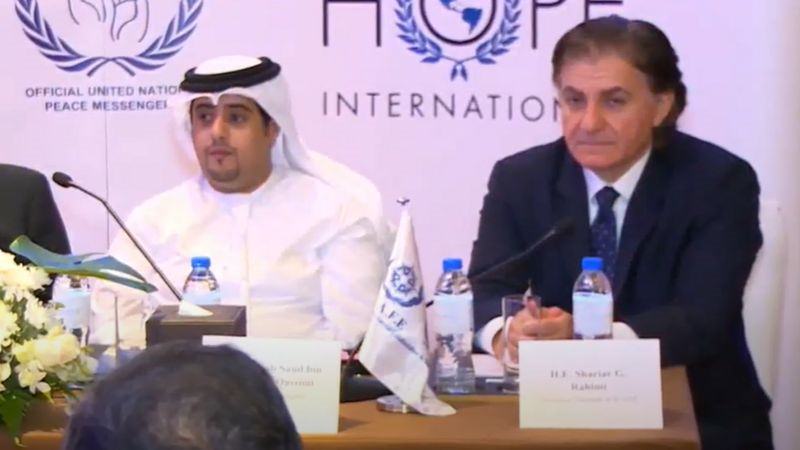 Its Sheikh Saud Al Qasimi with Shahriar Rahimi at the ICAFE event in Dubai.

After reviewing the files, the documents draw attention according to which Mashreq Dubai Bank wrote a letter to Dr Ruja on September 3, 2015 (September 12 2015) and provided explanations about the initiation of the process of blocking his account.

Eleven days later, an email was made available to the US court in which Dr Ruja wrote to one of his colleagues in the OneCoin project about the transfer of 50 million euros from Mashreq Matlabi Bank. Also, in the text of the email, Dr Ruja mentioned a meeting that he would hold next week with “one of the sheikhs in Dubai”; during that meeting, he will do “something” for his colleagues in the OneCoin project.

There is a photograph in the Dubai files, apparently taken on October 8, 2015, at an undisclosed location, showing Dr Ruja with Sheikh Faisal, Sheikh Saud’s father. The Al Qasimi family rules Sharjah, which shares a border with Dubai and Ras Al Khaimah, the northernmost emirate. Of course, Sheikh Faisal has not responded to the official media about his family’s relationship with Dr Ruja. 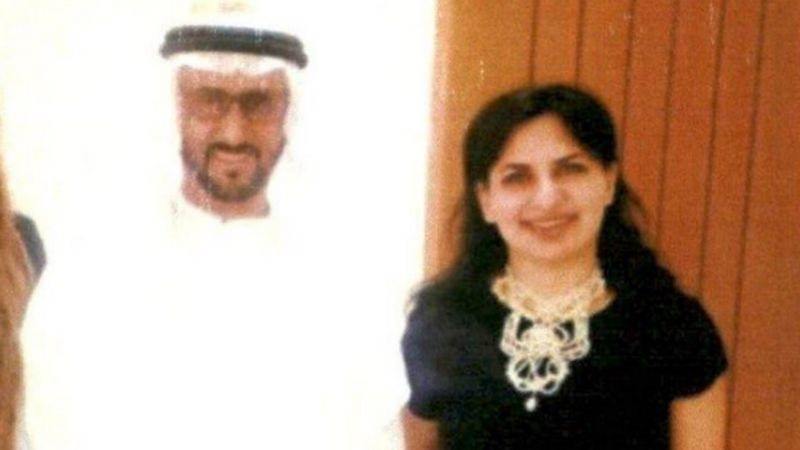 Additionally, the leaked files include an organizational identification card attributed to Dr Ruja Ignatova as a “special advisor” at the ICAFE organization, where Sheikh Saud once held a management position. In addition, it is alleged in the leaked files that connected this organization to the United Nations. Still, the spokesperson of the UN Secretary-General could not find any record of its affiliation and connection through regular routes recorded in official documents.

Sometime after the alleged Bitcoin transaction, the relationship between Sheikh Saud and Ruja Ignatova takes on a dark colour because there is a letter among the disclosure files that indicates that Sheikh Saud removed Mrs Ignatova from the position of ICAFE ambassador before getting involved in legal disputes over Dr Ruja Ignatova’s assets. 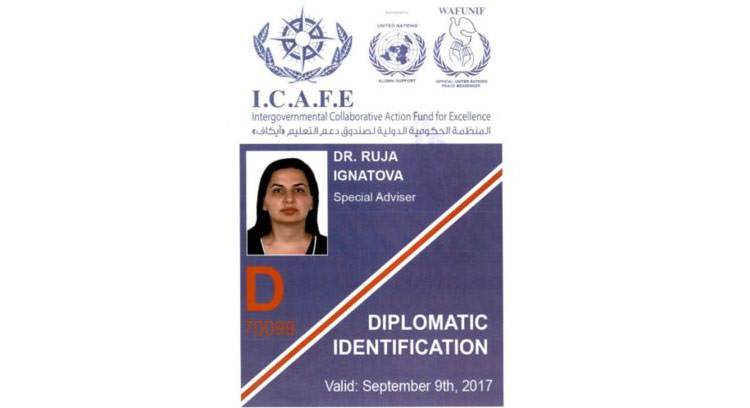 The organizational ID card of Dr Rozha Ignatova at ICAFE is revealed in Dubai files.

Sheikh Saud’s official lawyer, in response to the media’s questions about the suspicious bitcoin transaction, the connection with Dr Ruja Ignatova, and the role of Sheikh Saud in the ICAFE organization, said:

All the information and documents available are baseless and have no legal value.

Given that she made the suspected Bitcoin transaction through cold cryptocurrency wallets, it would be complicated to prove it, and the truth of this claim cannot be readily determined.

Bitcoin transactions are often traceable because all financial transfers on the network between cryptocurrency wallets are publicly stored on a database. However, the court documents do not provide details about the wallets involved in the transaction or even the number of wallets in which the bitcoins were stored, making it more complicated to trace the bitcoins.

The question that comes to mind is, does Dr Ruja Ignatova still have the bitcoins? Because the volume of bitcoins is worth attention and its movement attracts attention; Therefore, some people believe that no transfer has occurred yet.

Getting rid of billions of dollars in dirty money is much more complex than you imagine.

His case is ongoing, the FBI is looking for him, and his fate is unknown. Meanwhile, if Dr Ruja still holds 230,000 bitcoins, he has become one of the largest holders of this cryptocurrency. In November 2021 AD (Aban 1400), his capital reached about 15 billion dollars. Still, at the time of writing this article and with the sharp fall in the value of Bitcoin, this figure has gained about 5 billion dollars, which is still enough to remain hidden.