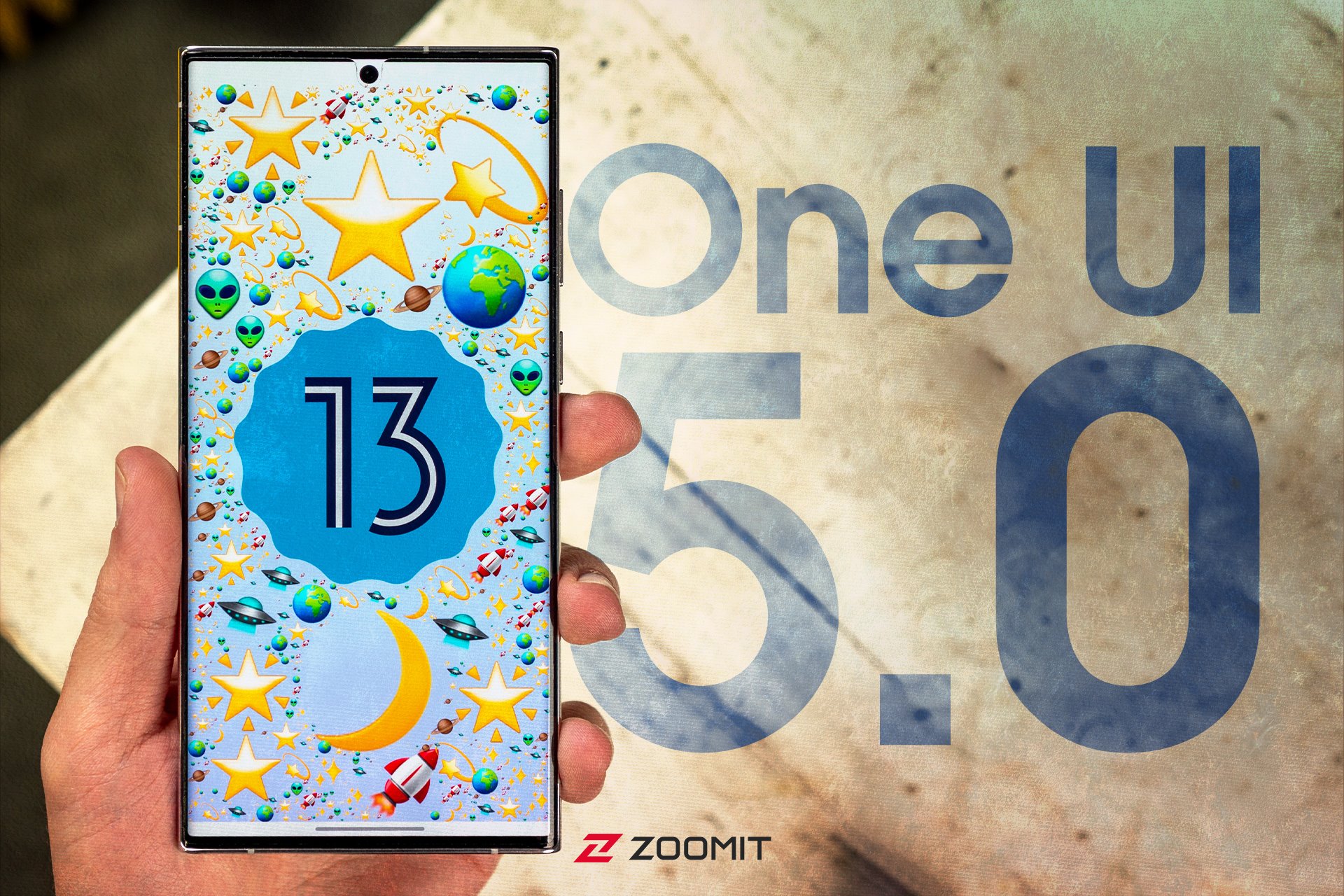 With One UI 5.0, Samsung Brings Its User Interface With An Updated Design And Attractive Changes Of Android 13 To Its Fans.

After the release of the official version of Android 13 for Google Pixel phones, Samsung, by releasing several beta versions of One UI 5.0, finally introduced the stable and official version of this skin based on Android 13 during the developer conference 2022 and then released it for the Galaxy S22 series phones.

At the time of writing the following article, the new One UI update has been released for the Galaxy S22, Galaxy S22 Plus, and Galaxy S22 Ultra phones, and other phones of this brand that is capable of receiving the new Samsung user interface skin will be released in the coming weeks and months (according to the table time provided by Samsung at the end of this article) will receive it. 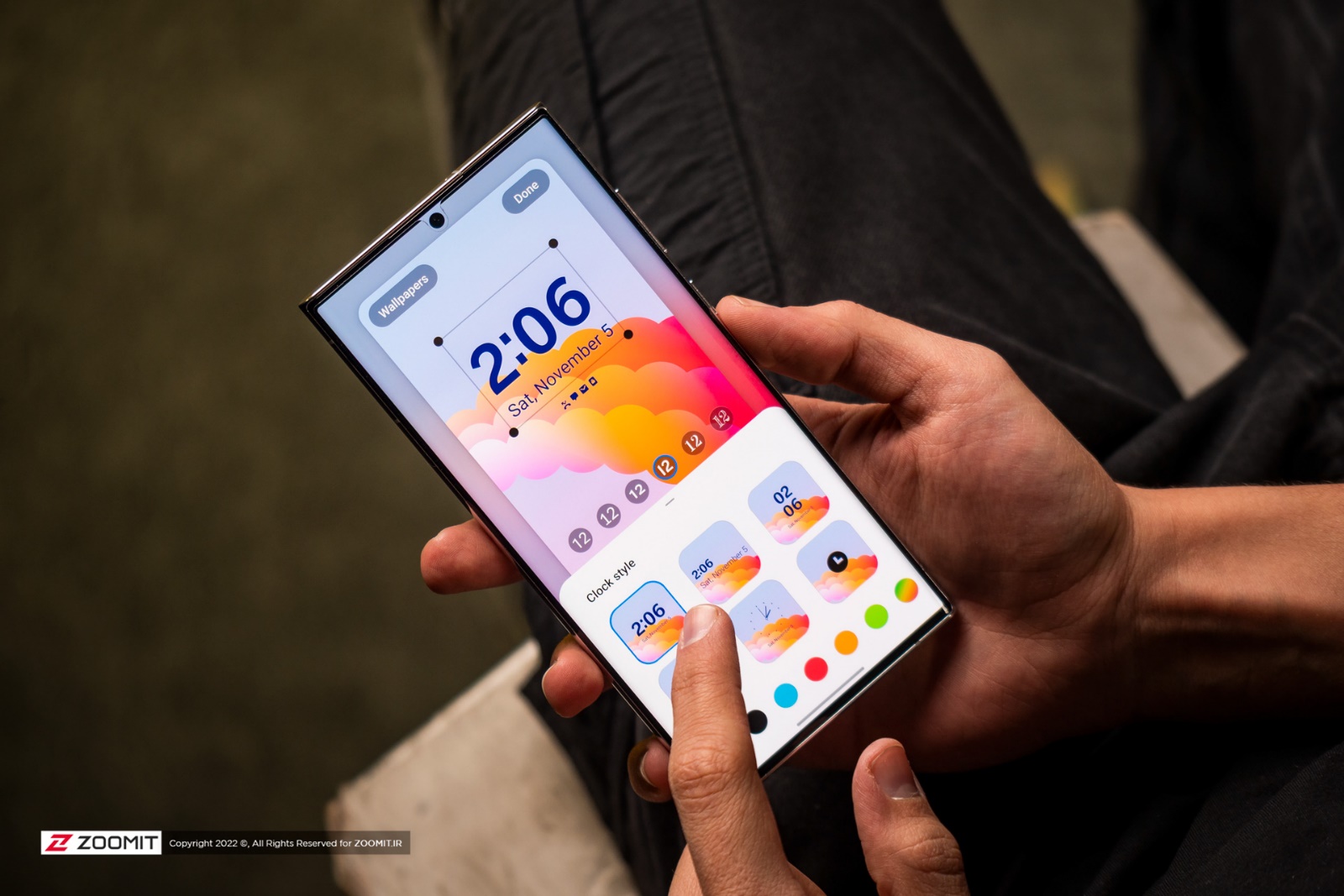 In general, it seems that the changes of One UI 5.0 are not too much compared to the previous generation; One UI 4.0 was considered a more significant update than One UI 3.0. Samsung has largely adhered to the successful formula of its previous generation in the new skin that it released based on Android 13; Perhaps the applied changes can be seen as a move to increase the competitiveness of One UI with other user interface skins and Hummel systems such as iOS 16.

In Samsung’s new skin, like in Apple’s latest operating system, the lock screen customization makes the user think that many changes have been made in the update. Still, in reality, it is not, and many of the One UI 5.0 customizations are already available in the Good Lock service of Galaxy phones. were located

Samsung’s Good Lock service is a service that includes beneficial applications for Samsung Galaxy phones, which allows extensive customization for the owners of these phones; For people who don’t have a Galaxy phone, the Fine Lock app is a similar alternative to Good Lock.

Changes and features of One UI 5.0

In the upcoming article from Zomit, we will review the latest version of the user interface of Samsung phones based on the Android 13 operating system, i.e., One UI 5.0, and check the changes presented in this version together.

In the new version of the One UI user interface, the icons of some native programs have been designed in such a way that they are more readable and modern; Apps like Gallery, Calendar, Phone, My Files, and Contacts have now been redesigned and new icons that look more cohesive than before and in line with the theme and design.

Ability to personalize the lock screen

Thanks to One UI 5.0, Samsung phone users can easily customize the look and feel of their devices. In this skin, it is possible to personalize the lock screen, and the user can change the wallpaper or the mode and color of the clock directly from the same lock screen.

Samsung offers a dynamic lock screen feature through the new Wallpapers menu, and the user can choose up to 15 photos and videos for the lock screen so that the images change automatically; The ability to select a short video as the lock screen wallpaper has also been added, and although using this feature can cost the battery more quickly, it gives the phone a distinct look. 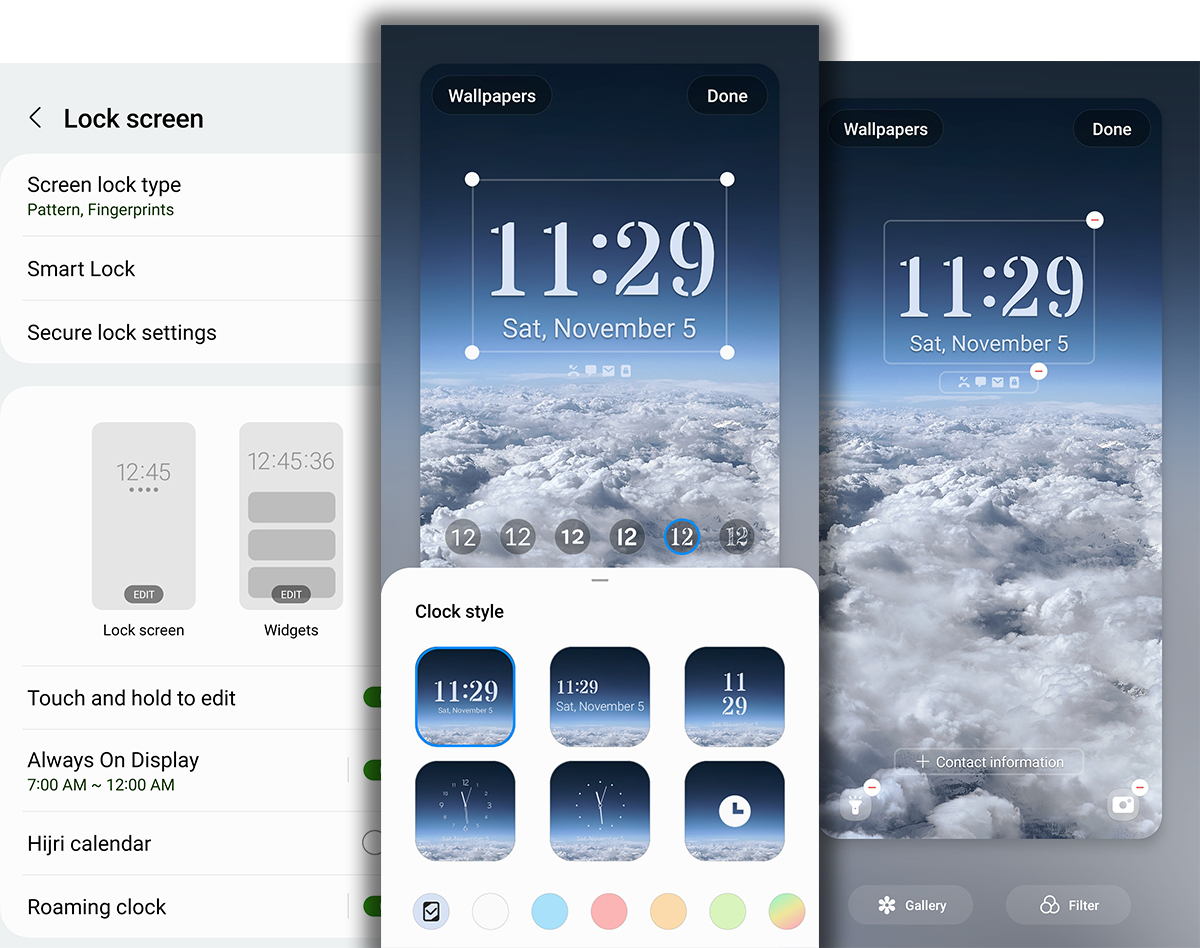 In One UI 5.0, it is possible to change the apps on the lock screen and open some apps, such as the calculator, camera, and voice recorder, without unlocking the phone. To use this feature, swipe to the right or left on the lock screen; It is also possible to activate the Do Not Disturb mode or the camera flash through the swipe shortcut, and you can also change the way notifications are displayed on this screen, in the first mode, only the application icon is displayed, and in the second mode, the details of each message can also be seen.

It is enough to go to the settings section of your phone after receiving and installing One UI 5.0. To use the features added to the lock screen in the new Samsung user interface skin and selecting Lock Screen, apply your customizations from the Edit section of the lock screen.

In One UI 4.1, Samsung introduced smart widgets, which are more advanced in One UI 5.0, and the user can stack several items of the same size in a package, just like we have seen in iOS. Slow With the help of this feature and by activating its automatic rotation, you can see a lot of information in a compact space.

It is enough to drag and drop a widget of the same size on another widgetSamsung phone will intelligently decide which device to show the user at different times; Of course, you can disable the auto-rotate option. To use this feature, you can also edit it (add a new widget or delete a device) by touching and holding your finger on the stacked devices.

New and dynamic themes in Material You

In the new version of One UI, Samsung has allowed the user to apply eight new color themes inspired by the wallpaper. In the One UI 5.0 color palette section, there are more colors to choose from, which are displayed by selecting the wallpaper. In this skin, the color of the applications that support the Google design language can be changed and create a complete integration in the phone. 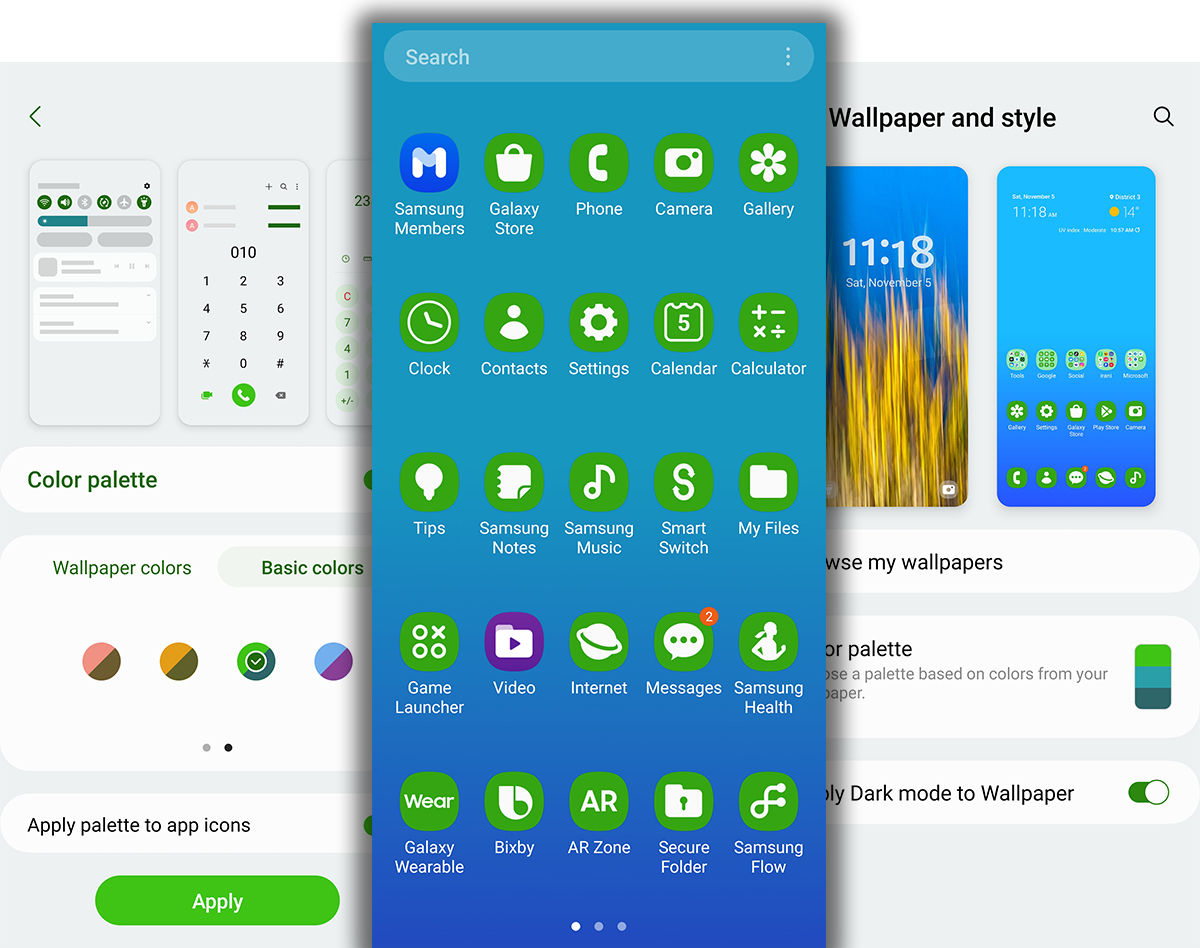 The arrangement of messages in the new version of One UI is more integrated and attractive, and the pop-ups in the new skin have rounded corners and match the background colors. Notifications and pop-ups are presented with a different look in One UI 5.0. This change applies to other sections, such as settings and volume indicators.

Ability to disable RAM Plus

RAM Plus or virtual RAM uses part of the phone’s memory as an extension to the device’s RAM. The added part of RAM is slower than the physical RAM of the phone; if not implemented correctly, it can slow down the machine. RAM Plus was first released in 2021 for some low-end Galaxy A series phones; a little later, Samsung expanded this feature to its flagship and high-end phones with One UI 4.0. 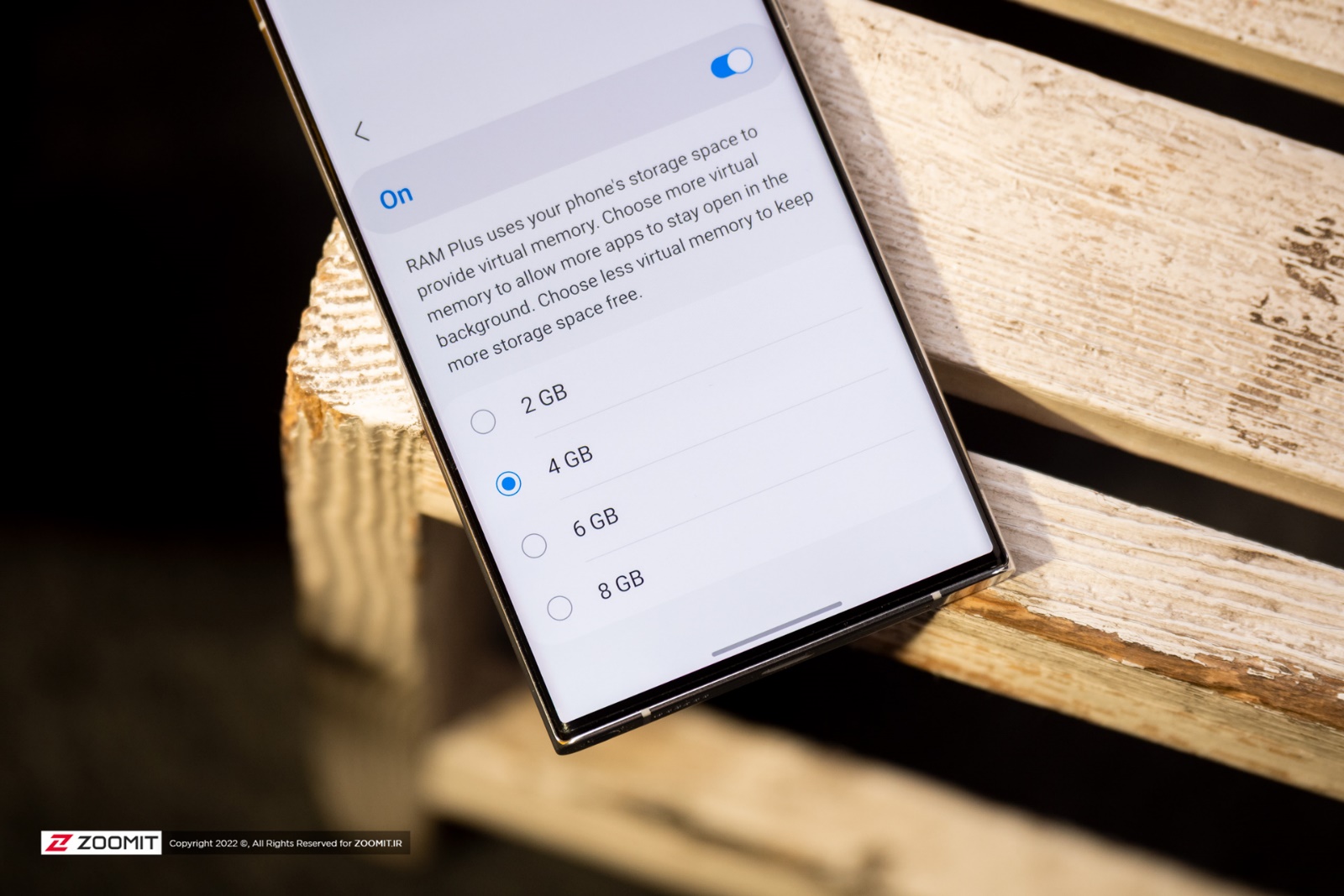 RAM Plus initially used 4GB of device storage by default, and Samsung introduced 2GB, 6GB, and 8GB options for this add-on in One UI 4.1, but there was no way to disable the feature. In One UI 5.0, the Korean company has added the option to disable RAM Plus altogether.

Using RAM Plus in flagship phones with 8 or 12 GB of RAM does not make any difference, and it is better to disable it in such phones and restore the device’s storage space.

To disable the RAM Plus feature, follow the path below and then select the option to turn off RAM Plus or adjust the amount of virtual memory; To implement the changes, you need to restart your phone:

Samsung has improved multitasking gestures in One UI 5.0; Parts of this feature were previously released on the Galaxy Z Fold 4:

One handy yet straightforward feature is text extraction in the new skin. This feature is used in One Ui 5.0 in the following two modes: 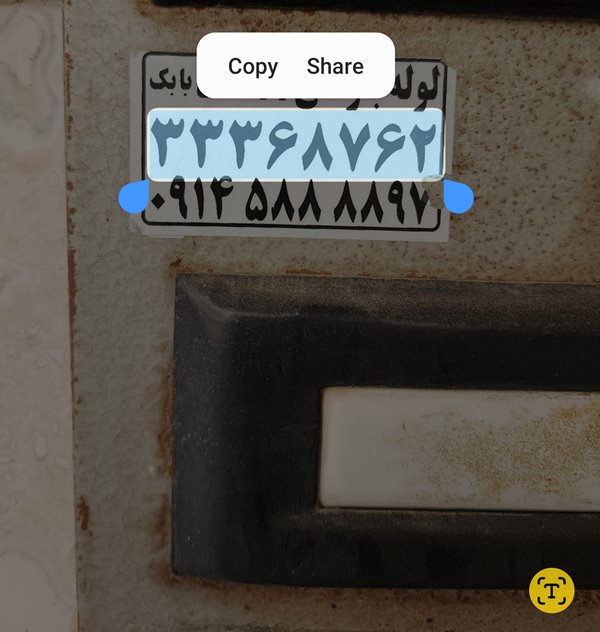 One UI 5.0’s text extraction feature can recognize phone numbers and immediately display the call option for you.

Samsung has renamed Bixby Routines to Modes and Routines in its new One UI; The Modes feature, which is similar to iOS, helps users focus more easily on their activities. 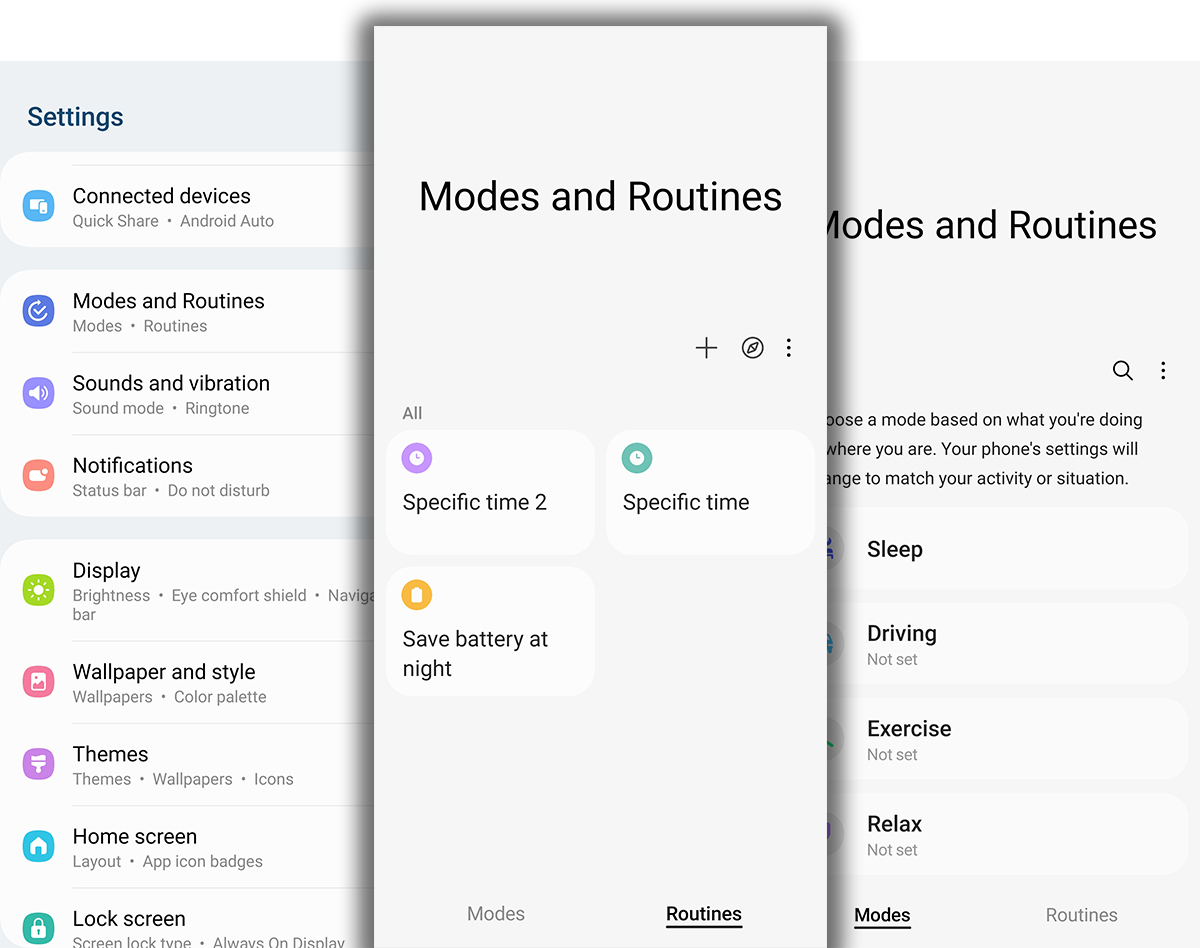 Using the Routines feature, you can define default settings for the phone that, for example, automatically run the Google Maps application while driving and display notifications without sound.

Significant improvements for professional photography have accompanied the camera user interface in One UI 5.0. You can easily zoom with one hand by swiping vertically on the zoom bar. In addition, for the advanced photography (Pro) mode, Samsung displays helpful tips regarding various controls and explains to the user what functions each lens has and when it is best to use it. 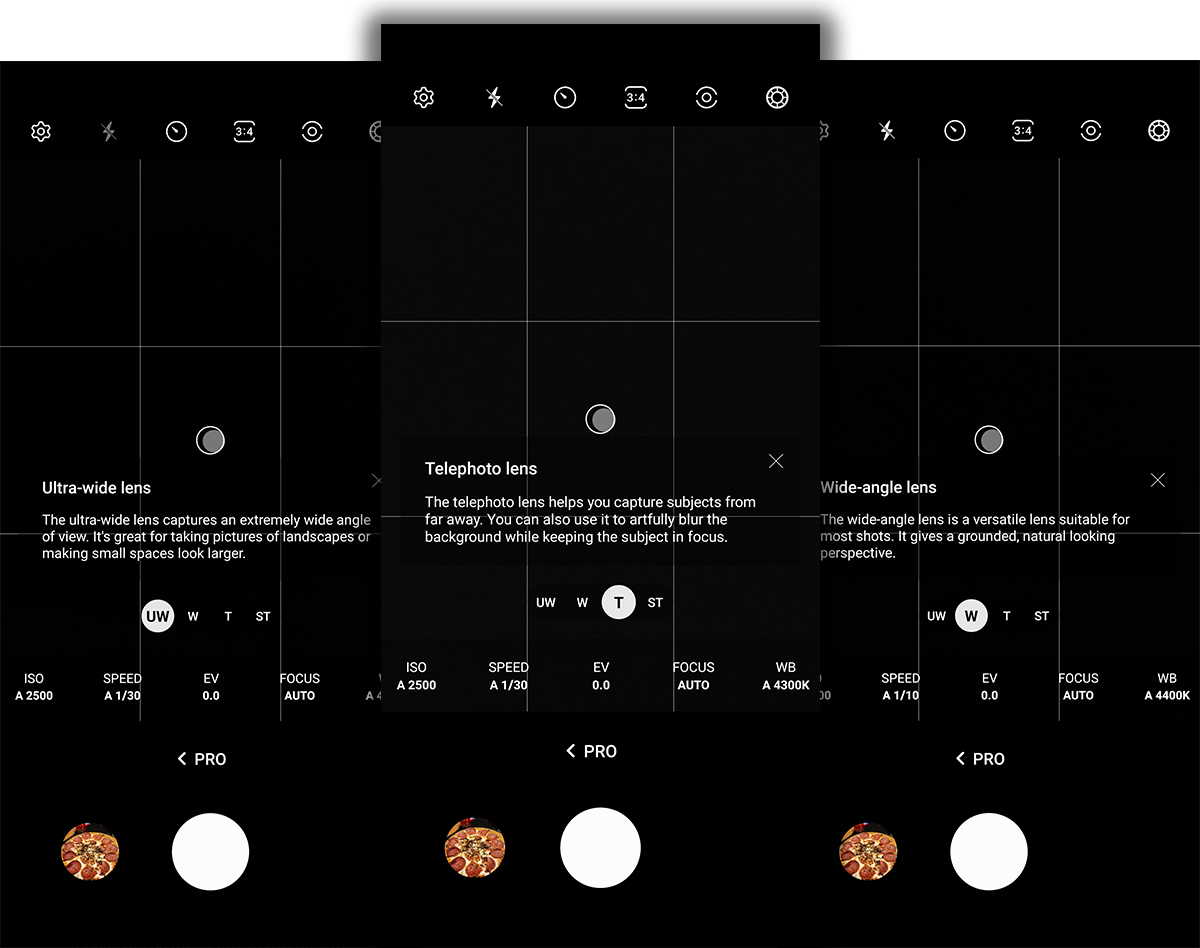 In the new skin camera application, the Filters and My Filters tabs have been combined so the user can easily access the filters. In addition to all these changes, it is possible to create new filters inside the application. Watermarks can be added to the images in the settings section. did

One UI 5.0 introduces the option to watermark photos from the camera app itself. You can now enter details such as the date, time, and name of your model, where you can add any other text. You can choose from three different fonts and even change the text alignment regarding design. The result looks great and is especially useful when you want to put your mark on an image.

In the One UI 5.0 user interface, relatively essential changes are observed in the security and privacy sector; In this user interface, Samsung has combined the Biometrics and Security and Privacy sections, which were separate before, and now, just like in Pixel phones, the user no longer needs to search in the settings section and through one page, to all related areas. It is accessible with security.

According to the timeline provided for the release of the new skin update, Samsung will bring One UI 5.0 to its phones and tablets by July (mid-summer) next year. You can see Samsung’s schedule below.

The Koreans have confirmed that One UI 5 will be released before the end of this month. This user interface will initially be available for Galaxy S22 series phones. The complete list of devices supported by the new version of One UI has not been published.

Other phones capable of receiving One UI 5.0 will receive a stable update of the new skin based on Android 13 a little later than February 2023 and finally in the first and second quarters of 2023.

In recent years, Samsung has increased the speed of releasing its software updates by a large margin.

Is your phone on the list of phones receiving One UI 5.0? What do you think about the changes in the new version of the Samsung user interface? If there is a change that caught your attention that we did not talk about in this review