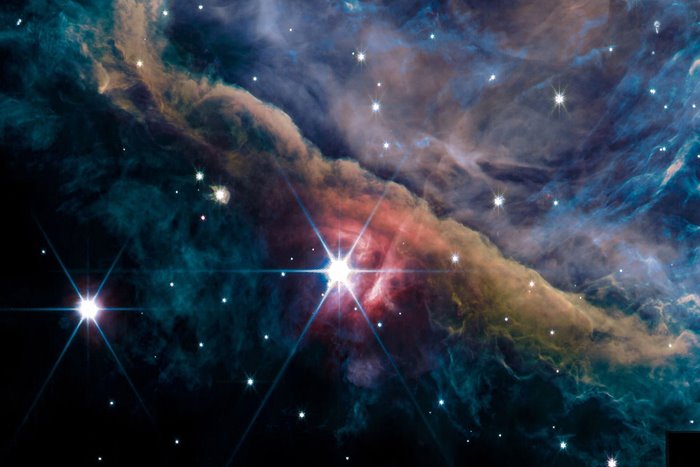 The James Webb Space Telescope This Time Went To The Orion Nebula, One Of The Brightest And Closest Nebulae To Earth, And Recorded The Clearest Image Ever Taken Of It.

The Orion Nebula is the birthplace of new stars and is considered one of the most studied regions of the sky. This nebula is located in the middle of the Orion constellation and is so big, close, and bright that it can be seen with the naked eye.

Since the Shekarchi Nebula is very close to us, with a distance of only 1344 light years, it is one of the essential observational targets in the sky to understand the formation of stars.

We have been staring at this nebula since its official discovery in 1610, But we have not discovered all its secrets yet. Now the most powerful space telescope ever built has provided a new view of the heart of the Orion Nebula.

Astronomers say the new images, obtained by the James Webb Space Telescope’s NIRCAM camera, are the most detailed and straightforward images ever seen of the Orion Nebula.

The telescope’s data is still being analyzed, but we expect to learn some fascinating new information about this fascinating part of the galaxy. 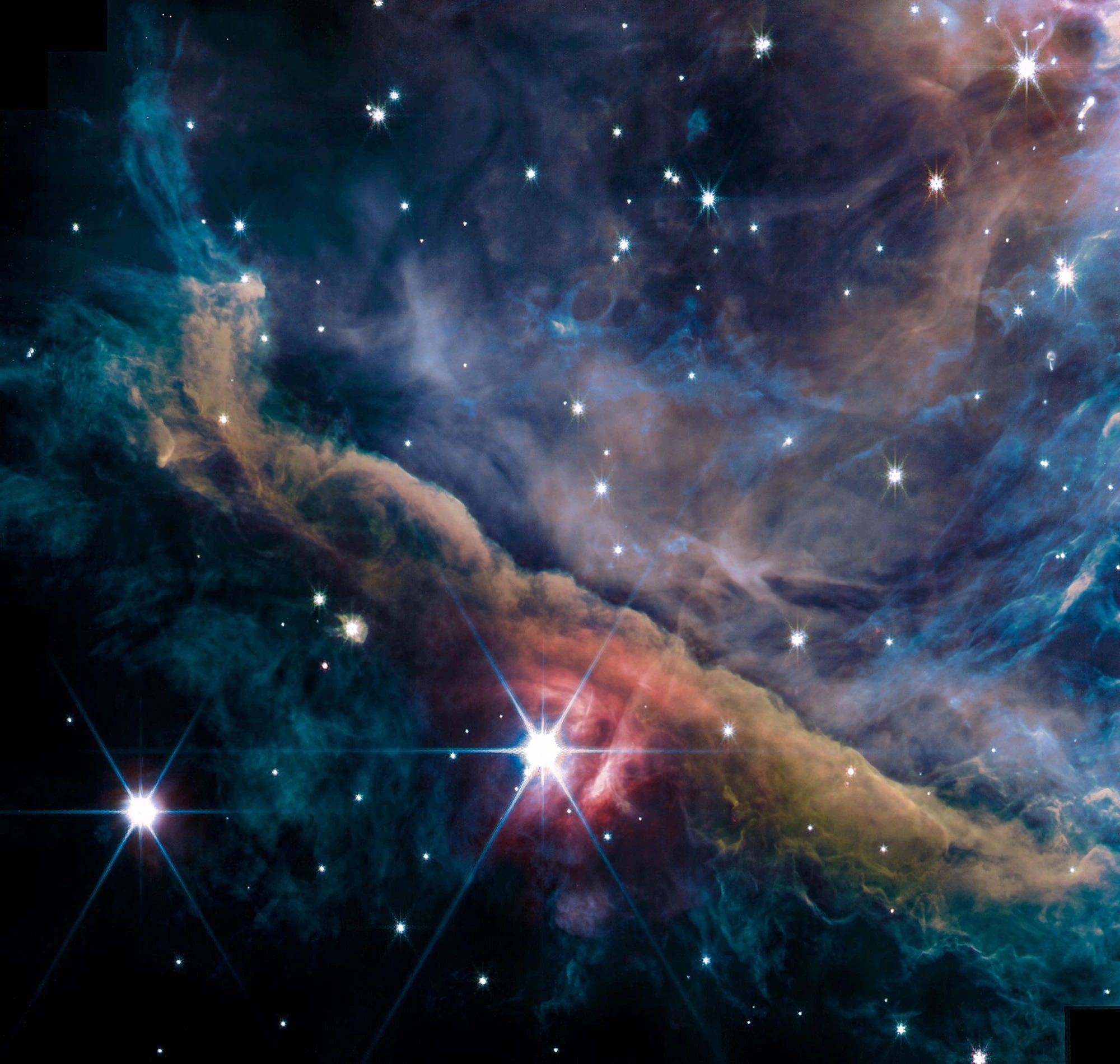 It’s The James Webb Telescope image of the heart of the Orion Nebula.

“We are amazed by the stunning images of the Orion Nebula,” said astrophysicist Alice Peters of Western Canada’s University. We started this project in 2017; As a result, we waited more than five years to get this data.”

The new observations allow us to understand better how massive stars modify the cloud of gas and dust in which they are born. These massive young stars emit large amounts of ultraviolet light directly into the cloud that still surrounds them, changing the cloud’s physical shape and chemical composition. How this process affects the formation of more stars and planets is still not well understood.

Star formation is a very gaseous and dusty process. Baby stars are born from dense masses in clouds of gas and dust that collapse due to gravity, and as they begin to accumulate material from the cloud around them, they form a disk at the same time as their rotation. The nature of this process is such that it is difficult to see; Because all that gas and dust blocks the light from getting out to see what’s inside the cloud.

However, the longer wavelengths of infrared, the range through which James Webb sees the world, can penetrate the dust and make it possible to see invisible regions at shorter wavelengths, such as the visible spectrum. As a result, scientists were excited to use James Webb to study star formation and learn new details about a process that had been difficult to see until now. 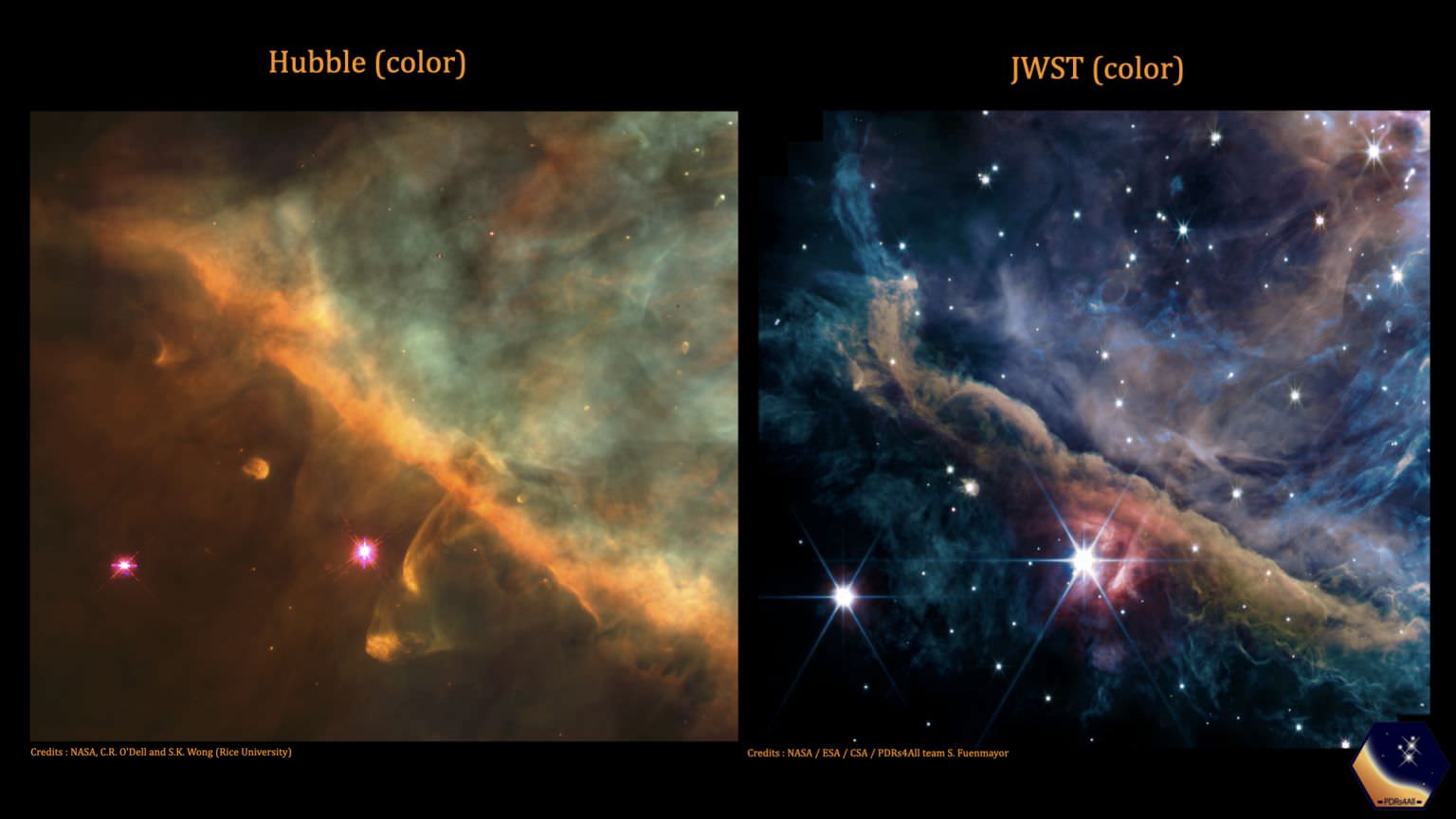 Comparing Hubble‘s visible-light image of the Orion Nebula (left) with James Webb’s image of the same region (right) shows how well the powerful telescope can reveal what’s hidden beneath the dust.

The new image focuses on the “hunter’s column” structure that runs diagonally from the top left to the bottom right.

Light from a cluster of young stars called the Trapezium Cluster illuminates the scene in the upper right corner. This powerful, ionizing UV light slowly fades away from the hunter’s plume.

The collapse of the column is one of the processes that astronomers call feedback. This event occurs when the wind or stellar physical radiation sweeps the matter away and reduces the intensity of star formation. They also produce complex shapes and structures in the molecular cloud, Including strings and holes, which are recorded in the new image.

Other objects in the image include globules (dense clumps of material with small stars inside them) and a young growing star with a disk of material around it. This tablet is evaporated from the outside by the radiation of the stars of the trapezoidal cluster. Approximately 180 objects, called ionized protoplanetary disks, have been found in the Orion Nebula.

The brightest star in the image is Theta 2 Orionis A, a member of a multi-star system next to the Trapezium cluster. Although this star appears very bright in the image of the James Webb telescope, it is only visible on Earth in areas that are not significantly affected by light pollution.

However, Theta 2 is a scorching star with a brightness of more than 100,000 times that of the Sun. Its light reflects off the surrounding dust and creates a beautiful red glow. 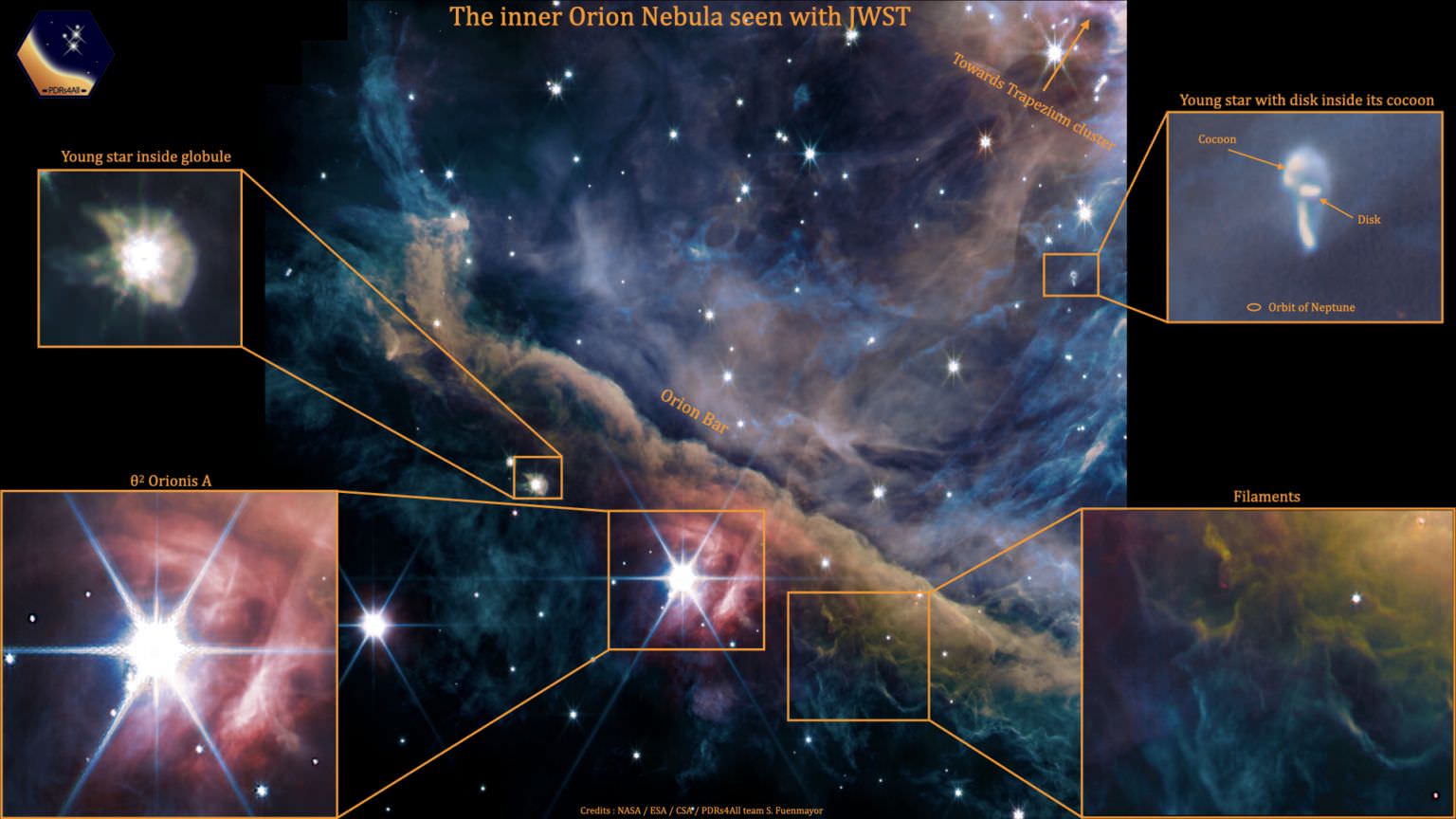 It’s A labeled version of the James Webb Telescope image of the Orion Nebula.

“We see several dense filaments,” says astronomer Olivier Bernet of the Institut astrophysics et Space in France. These string structures may give rise to a new generation of stars in the deeper regions of the gas and dust cloud. Star systems that have already been forming are also visible in the image.

The scientists hope a more profound analysis will give us more information about the many and varied processes we see in the image. It is believed that our solar system was born in an environment similar to the Orion Nebula; As a result, these future studies could, in turn, reveal more information about how the Sun, Earth, and other planets formed.

“We have never been able to see the intricate details of how interstellar matter is organized in these environments and understand how planetary systems can form in the presence of this strong radiation,” says astronomer Emily Hubbart of the Institute for Space Astrophysics. “These images show the legacy of interstellar space in planetary systems.”