In the fight against cancer, early detection is a key factor for successful treatment. Nanotechnology provides the sensitivity to detect extracellular cancer biomarkers and cancer cells. This article summarizes the applications of nanotechnology in the diagnosis of cancer. 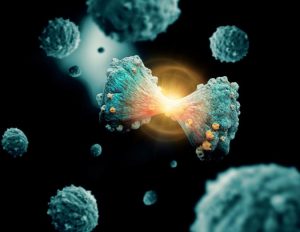 Mortality and cancer are on the rise worldwide. According to GLOBOCAN 2018 estimates, the number of new cancer cases will reach 18.1 million, and cancer deaths will reach 9.6 million. It is estimated that by 2030, 30 million people will die each year from cancer. In the fight against cancer, one of the keys to successful cancer treatment is early detection. Cancer mortality is greatly reduced with early detection. For example, breast cancer shows a relative 5-year survival rate of nearly 90% in the early stages. While patients with metastasis show a 5-year survival rate of only 27%.

At present, imaging techniques and morphological analysis of tissues (histopathology) or cells (cytology) help in the early detection of cancer. The most widely used imaging techniques, such as X-rays, magnetic resonance imaging (MRI), computed tomography (CT), endoscopy, and ultrasound, can only detect cancer if a visible change in the tissue.

Thousands of cancer cells may have increased and even metastasized at that time. In addition, current imaging techniques cannot distinguish benign lesions from malignant lesions. In addition, cytology and histopathology can not be used effectively and independently to diagnose early-stage cancer. Therefore, the technology development to detect cancer in its early stages (before metastasis) presents a major challenge.

Although nanotechnology has not yet been used clinically to diagnose cancer, it is now available in various medical tests and monitors, such as the use of gold nanoparticles in home pregnancy tests. To diagnose cancer, nanoparticles capture cancer biomarkers, such as cancer-related proteins, circulating tumor DNA, circulating tumor cells, and exosomes.

The main advantage of nanoparticles to diagnose cancer is their large surface-to-volume ratio. Due to this property, nanoparticle surfaces can be densely coated with antibodies, small molecules, peptides, aptamers, and other components. By providing different binding ligands to cancer cells, polyvalent effects can be achieved to improve the specificity and sensitivity of an assay.

Nanotechnology for the detection of extracellular cancer biomarkers

The cancer biomarker acts as a measurable biological molecule found in the blood and other tissues or body fluids such as saliva and urine, indicating the presence of cancer in the body. Cancer biomarkers may be proteins (secreted proteins or cell surface proteins), carbohydrates, or nucleic acids (circulating tumor DNA, miRNA, etc.) secreted by the body or cancer cells when cancer is present.

Measuring specific levels of cancer biomarkers allows early detection of cancer or tumor recurrence and helps monitor the effectiveness of treatment. However, the use of biomarkers has been limited by several barriers, including low concentrations of biomarkers in body fluids, heterogeneity in frequency, and timing of biomarkers in patients. Nanotechnology offers selectivity and high sensitivity and can perform multiple measurements simultaneously.

Biosensors can be enhanced with nanoparticles/nanomaterials to provide specific targeting. In addition, the use of nanoparticles increases the surface-to-volume ratio, which makes biosensors more sensitive to meeting the needs of specific biomolecular diagnostics. Quantum dots (QDs), gold nanoparticles (AuNPs), and polymer dots (PDs) are three common nanoparticle probes used in cancer diagnosis.

The FDA has approved several proteins for cancer diagnosis, including CEA (colorectal cancer). AFP (liver cancer), PSA (prostate cancer), and CA-125 (ovarian cancer). Specific interactions with antibodies, antibody fragments, or aptamers can help identify these properties. The interaction event then becomes a measurable signal that can be measured.

Using this strategy, two antibodies conjugated to QD against neuron-specific enolase (NSE) and embryonic cancer antigen (CEA) were used to identify the two biomarkers. And the detection limit (LOD) of each reached 1.0 ng / ml.

CEA, the most popular cancer biomarker, has been used extensively to monitor anticancer therapies. As well as to predict tumor recurrence after surgery in late-stage cancer patients. NSE is an enzyme that catalyzes the conversion of 2-phosphoglycerate to phosphoenolpyruvate, linked to carcinoids, small cell lung carcinoma, and islet cell tumors.

microRNA is associated with a cancer diagnosis. Jou AF reported a two-step assay platform for the sensitive diagnosis of miR-141 (a promising biomarker for prostate cancer). The first phase of the assay platform used CdSe / ZnS QDs modified with nucleic acids activated by FRET fluorescence quenching. Which contained a telomerase primer sequence with a detection sequence for the miR-141 sequence.

The FRET extinguisher showed covalent binding to CdSe / ZnS nucleated acid-functionalized QDs. When the miR-141 hybridized with the probe, a duplex is separated by a duplex-specific nuclease (DSN). Release the cut-off unit and activate the fluorescence of the QDs. This cleavage also resulted in exposure to the telomerase primer sequence. The platform helped identify miR-141 in serum samples and distinguished healthy individuals from carriers of prostate cancer.

Genome methylation (Methylscape) has recently been reported as a common feature of most cancers and, therefore, can be a common cancer biomarker. In one study, the authors observed differences between cancer and natural genomes based on DNA-gold affinity and DNA solubility. And developed simple, rapid, selective, and sensitive single-step electrochemical or colorimetric assays for cancer diagnosis.

Machine learning and RNA sequencing algorithms helped identify miRNA EV biomarkers. This approach was applied to the mouse model of pancreatic duct adenocarcinoma (PDAC) and helped identify a biomarker panel of eleven miRNA EVs. Scientists recently reported a sensor platform that detects proteins on the surface of exosomes in minutes. The sensor consists of a gold nanoparticle (AuNP) and a complex aptamer panel based on 13nm AuNPs covalently targeted with a 5-aptamer panel that targets cell surface proteins with high affinity and strong specificity. Give, design.

Nanotechnology for the detection of cancer cells

Approximately 90% of deaths from solid tumors are attributed to metastasis. A cancer cell from the primary tumor first invades the surrounding tissue during metastatic spread. It then enters the blood vessels (intravascular) and lymphatic system, where it survives and travels through the bloodstream to the small vessels in the tissue. It is moved away and then out. Blood flow (ejection) and survival in the distal tissue microenvironment provides a suitable external microenvironment for macroscopic secondary tumors.

Early detection of metastatic cancer cells in the bloodstream, also known as circulating tumor cells (CTCs), could potentially affect the prognosis and diagnosis of cancer. As part of fluid biopsy, CTCs have been extensively studied because of their potential applications.

Diagnosis of CTC can help us understand the molecular organization of the tumor in a minimally invasive way. However, CTCs show relatively little frequency and heterogeneity, which poses technical challenges for CTC separation and characterization.

In recent years, researchers have focused on applying nanotechnology to the sensitive detection of CTC. These technologies can help identify cells and molecules and thus have a wide range of clinical applications, such as early diagnosis and evaluation of therapeutic response and disease development. For CTC detection, nanomaterials have a fundamental advantage in their high surface-to-volume ratio. Which enables the uptake of high-performance targeting ligands with the ability to detect specific molecules on cancer cells.

Nanoflares are useful for detecting intracellular mRNA. Researchers, meanwhile, have developed nanoflares for the simultaneous detection of different intracellular mRNA transcripts. AuNPs were functionalized with 2-3 strands of DNA recognition in these multiple nano flame studies and later generated with hybrid short complementary reporter strands as nanoflares. In some cases, the nano-flame platform for quantifying intracellular RNA in living cells expands.

Smart-Flares were used to study the heterogeneity of melanoma y tumor cells. These Smart-Flares could quantify genomic expression at the single-cell level, thus expanding our knowledge of cancer. Examining cancer cell heterogeneity to identify new biomarkers is crucial for early cancer detection. 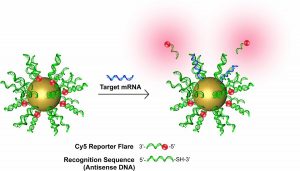 Nanotechnology has been extensively studied in the laboratory for cancer diagnosis. However, clinical application is the ultimate destination of these studies. Currently, several nanotechnology-based cancer diagnostic methods are in clinical trials.

For example, MSKCC and Cornell University researchers have developed hybrid silica nanoparticles (point C) for PET imaging of patients with metastatic melanoma or malignant brain tumors. These nanoparticles, along with 124I-labeled cyclo- [Arg-Gly-Asp-Tyr] (cRGDY) peptides capable of selectively binding to integrins, can be used to examine tumor cells.

In addition, another team of researchers (also from MSKCC) has developed cRGDY fluorescent C-dots (cRGDY-PEG-Cy5.5-C points) to map lymph nodes that can be visualized during surgery to visualize affected lymph nodes—used for cancer. As research progresses, it can be predicted that nanotechnology-based cancer diagnosis methods will become more and more advanced in clinics.