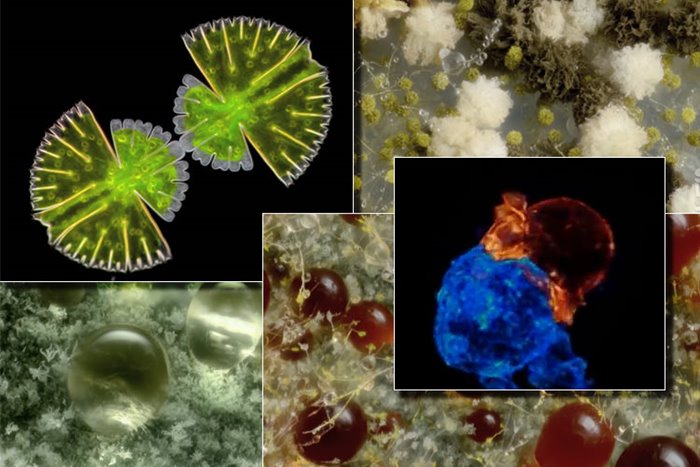 Nikon’s annual photomicrography competition, titled “Nikon’s Small World,” was first held in 1975 to honor the efforts of scientists who use light microscope photography in their research.

Microscopic time lapses; Nikon’s portal to the small world is on the move. In 2011 and the thirty-seventh year of holding this competition, Nikon announced that it would also accept participants’ works in a new category called “Small World in Motion.”

In the hope that this microscopic world’s astonishing details and beauty will amaze you, we look at a selection of the best works presented in the eight years of this competition.

The results presented in this section include videos and digital time-lapses recorded by various scientists with a microscope and are judged based on parameters such as the originality of the work, professional skill, visual impact, and scientific load. Videos are short and less than 25 MB, so don’t hesitate to watch them.

Involvement of killer T lymphocyte (orange) with cancer cells (blue):  T lymphocyte is a type of body immune system cell called killer T cells that directly attack virus-infected cells and cancer cells by producing a protein called perforin. They create pores in these cells and cause their death. For this reason, this type of immune response is known as the cellular immune response.

Development of the nervous system in zebrafish embryos

First place 2018: Elizabeth Haynes  and Jay Henry, from the University of Wisconsin, USA

Growing spores of Aspergillus niger fungus: this fungus is the cause of some infectious diseases in humans and animals. It is used in commercial applications to produce citric acid and soy sauce fermentation.

Neurons in two microcompartments bring their neurites together to communicate with each other: In the simplest terms, neurons are the primary type of nerve cells and consist of three general parts: dendrites, axons, and synaptic terminals. Branches of neurons, including dendrites and axons, are called neurites. Neurons receive nerve messages through dendrite branches and transmit them through axons. The connection point of a neuron with other neurons or with other cells is called a synapse. Any part of a neuron can synapse with any part of another neuron. The most common synapse is the synapse between the axon of one neuron and the dendrite of another neuron.

A view of the structure of a type of neuron

Cell division of a variety of green algae

The cardiovascular system of zebrafish

Heartbeat and blood vessels of a three-day-old bird embryo

First place in 2011: Anna Ferns, from the University of Oxford, England

Sweating on the skin of the finger

Fluorescent dextran injection into the circulatory system of zebrafish parabiotic embryos to observe the typical blood flow between two organs: parabiotic is the connection of two organs or existing through surgery; in such a way that they have a standard blood circulation system.