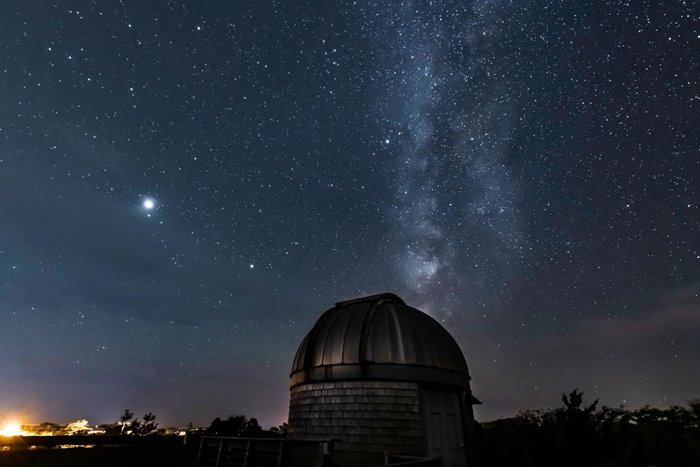 Massive Ground-Based Telescopes Are Precision Eyes That Probe Deep Into Space. In This Article, You Will Learn About Ten Of The Most Powerful Current And Future Terrestrial Telescopes.

Telescopes On Earth. The world’s largest telescopes are often successful in space exploration due to their ability to gather more light and examine the universe’s history from great distances. With space telescopes such as the Hubble Space Telescope (HST) and the James Webb Space Telescope ( JWST ), ground-based telescopes can cover more dimensions and have fewer weight limitations.

Some of the largest telescopes on Earth act as Earth’s eyes to discover supernovae, galaxies, and other distant objects. When these telescopes are well positioned on the ground with a wide field of view, they can focus on specific areas or events, whereas space telescopes need to be in the correct position at the right time. This article mentions ten giant and active telescopes of the present and future. 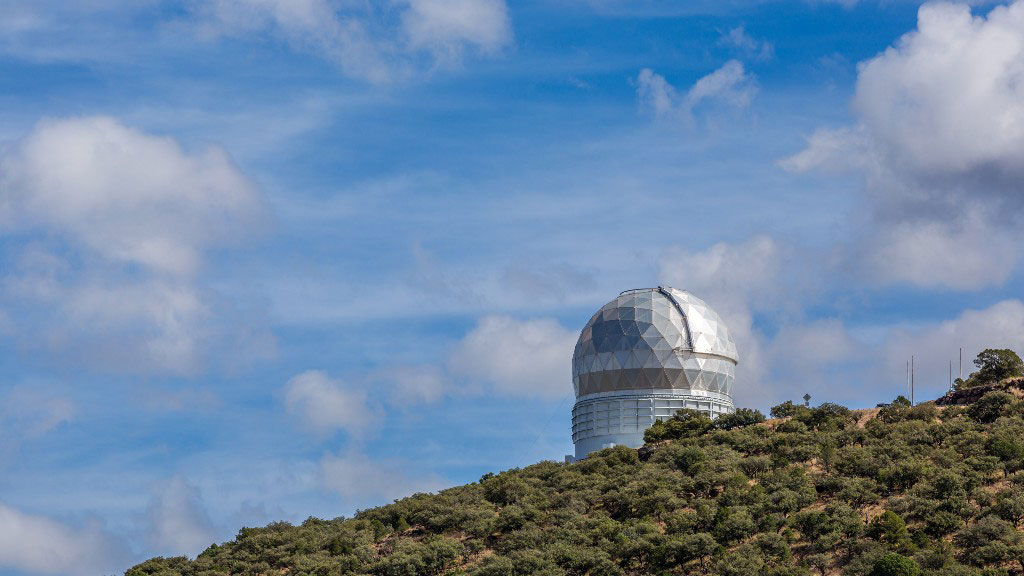 The Hobby Eberly telescope observed the first light in 1996

With its unique design, the Hobby Eberly telescope is one of the world’s most successful and largest optical telescopes. One of the distinctive features of this telescope compared to other telescopes is its mirror, which is always at an angle of 55 degrees from the horizon. This angle may seem limited, but its rotation mechanism can cover 70% of the visible sky. The mirror of this telescope has 91 hexagonal sections to collect visible light.

The most important discovery of the Hobby Eberly telescope was the quasar’s light. A quasar is a very bright object that receives energy from a supermassive black hole. When the light from this quasar began its journey towards Earth, the Earth was only one-eighth of its current age. 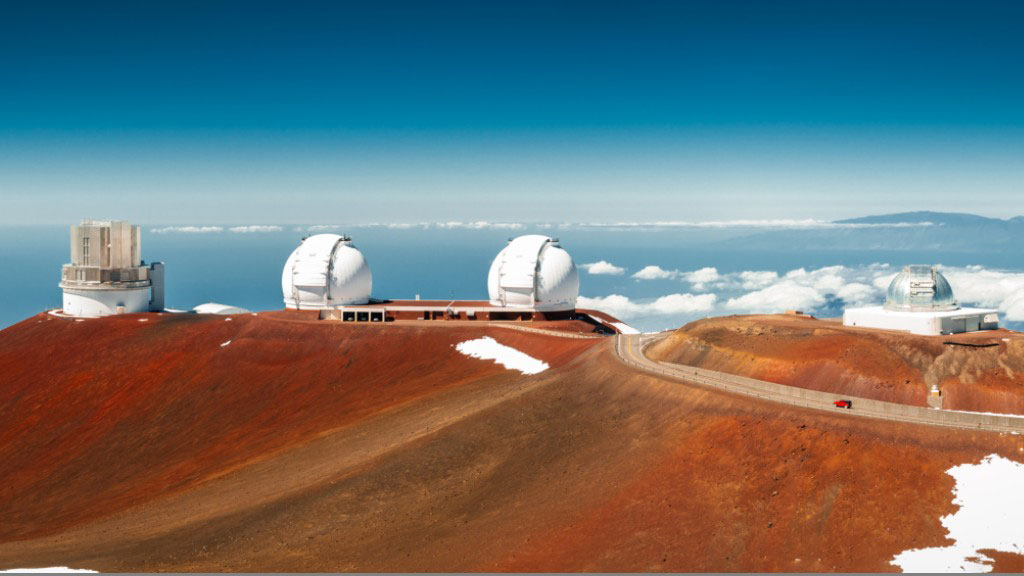 The Keck observatory is located at an altitude of 4145 meters.

Although the Keck Observatory’s twin telescopes are on Earth, they can see farther than the Hubble Space Telescope. Nearly a quarter of American astronomers’ observations result from Keck’s work, known as one of Earth’s most productive scientific observatories.

The Keck Observatory can record clear images in the visible light spectrum using optical and infrared telescopes. From the extraordinary photos of these telescopes, we can mention the birth of stars that heat the surrounding gases by producing visible radiation. This event can be detected in the infrared spectrum. Still, at the same time, it allows astronomers to see deep space using the infrared spectrum.

The Keck Observatory is located near the equator on top of Hawaii’s extinct Mauna Kea volcano. Each telescope consists of 36 mirrors connected to a large panel. These two telescopes operate at sub-freezing temperatures to avoid thermal interference with infrared images. 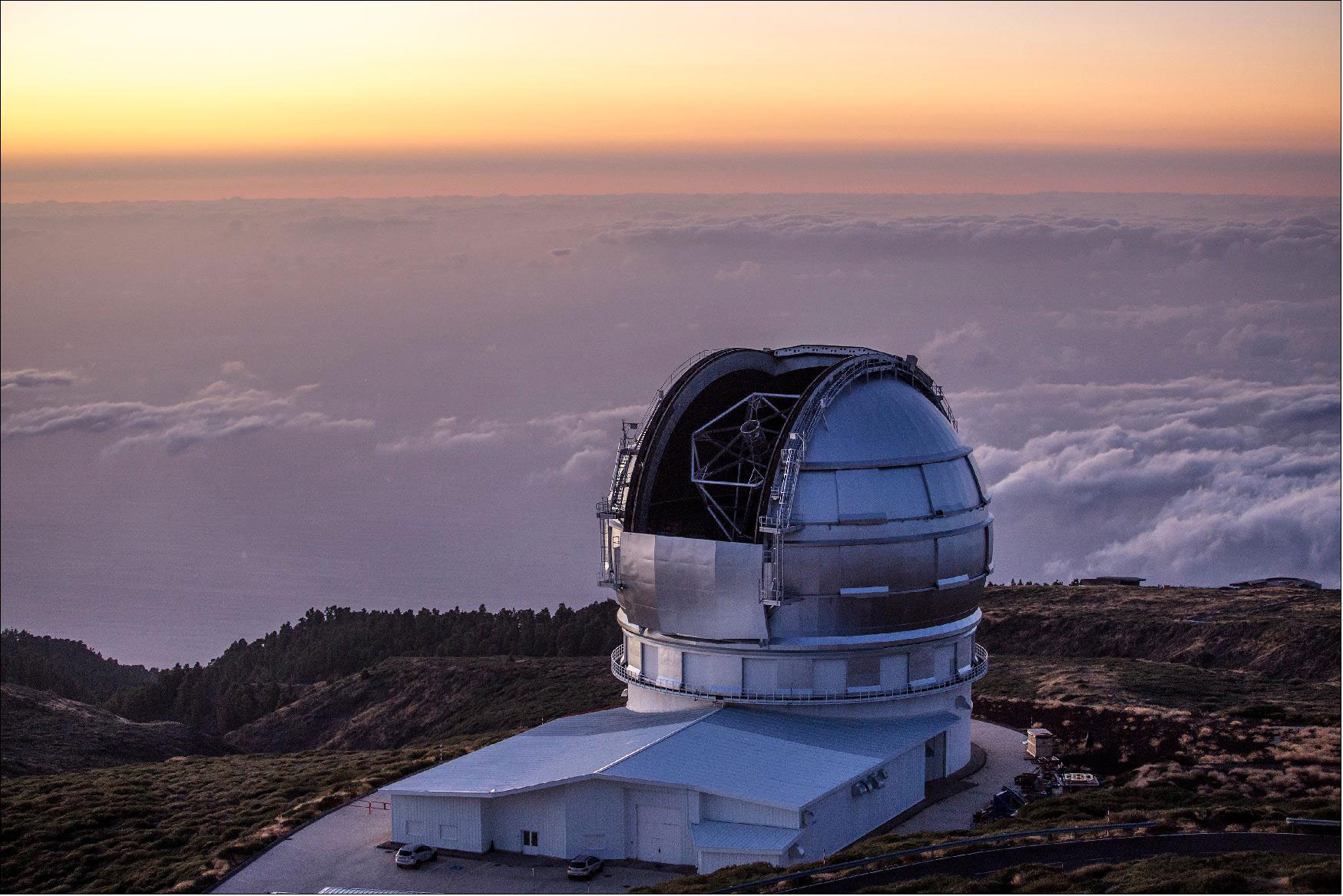 The GTC telescope is one of the largest active telescopes with a multi-segment primary mirror.

The Large Telescope of the Canary Islands, or GTC, is one of the largest telescopes operating with a multi-segment primary mirror. The Spanish Institute for Astronomical Research (IAC) manages the entire GTC project with the support of various universities and scientific institutions.

The GTC telescope was launched with only 12 hexagonal sections in its first test phase, and these sections eventually reached 36. This telescope has three main imaging instruments: MEGARA, a multi-wavelength spectrometer, and OSIRIS, a low-resolution integrated spectrometer. This telescope was fully launched in 2009 at 130 million euros. One of the achievements of GTC is the discovery of the most populated galaxy cluster. 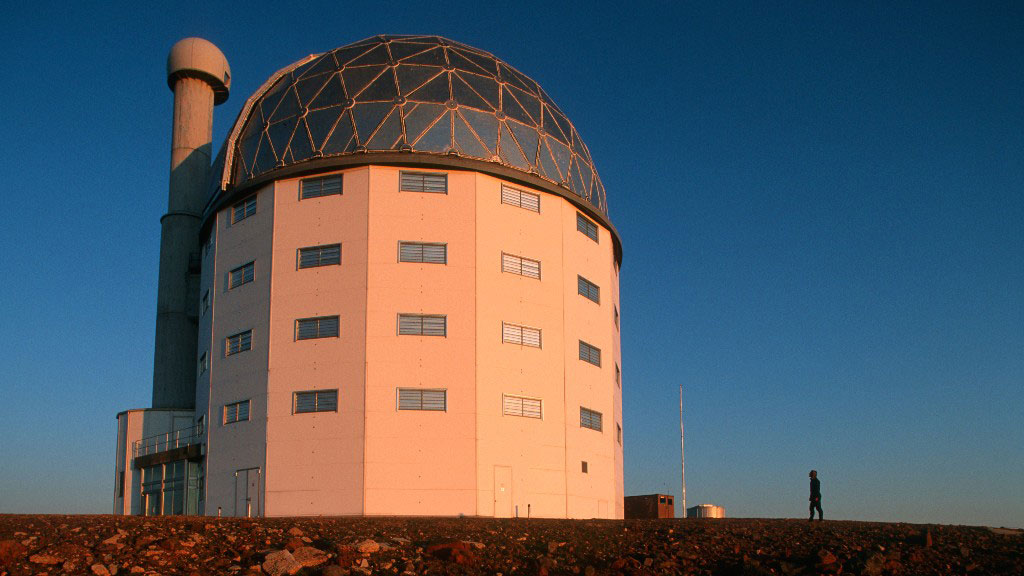 The South African Giant Telescope was built in 2005

The design of the SALT is almost identical to the Hobby Eberly. SALT has the same hexagonal panels as Hobby Eberly, but these panels have been redesigned to improve the field of view and image quality. SALT mirrors are more sensitive at shorter wavelengths due to added metal layers. Among SALT’s top discoveries is the first white dwarf pulsar, the first rotating stellar remnant of a white dwarf. 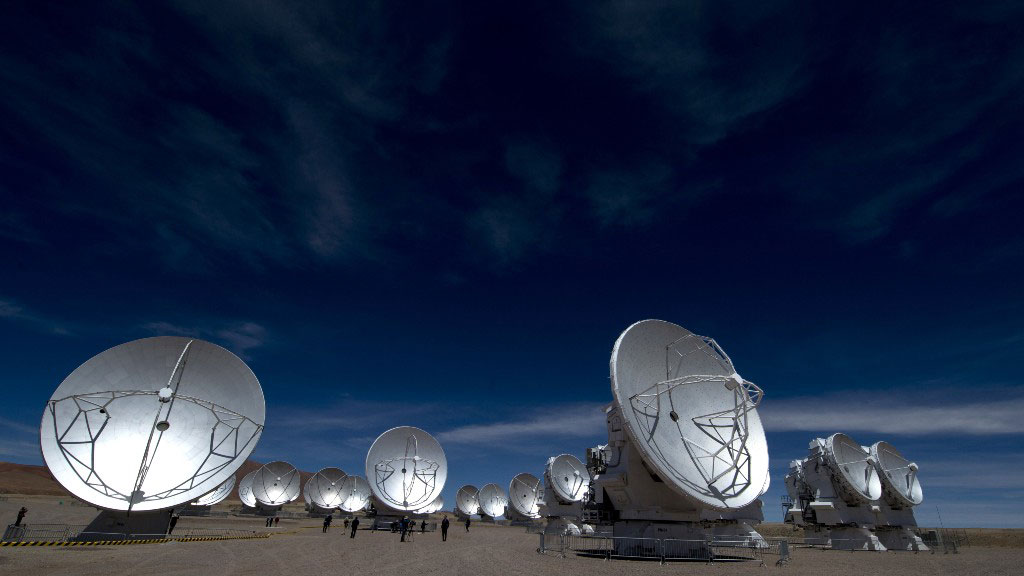 Chile’s Atacama Desert is primarily clear and cloudless at night.

ALMA consists of 66 radio telescopes, 54 of which have a diameter of 12 meters, and the other 12 telescopes have a diameter of 7 meters. This set is also known as an astronomical interferometer; all antennas work together to achieve the same image. The field of view also changes when the array is used in different combinations. These combinations are essential for targeting desired parts of the galaxy. 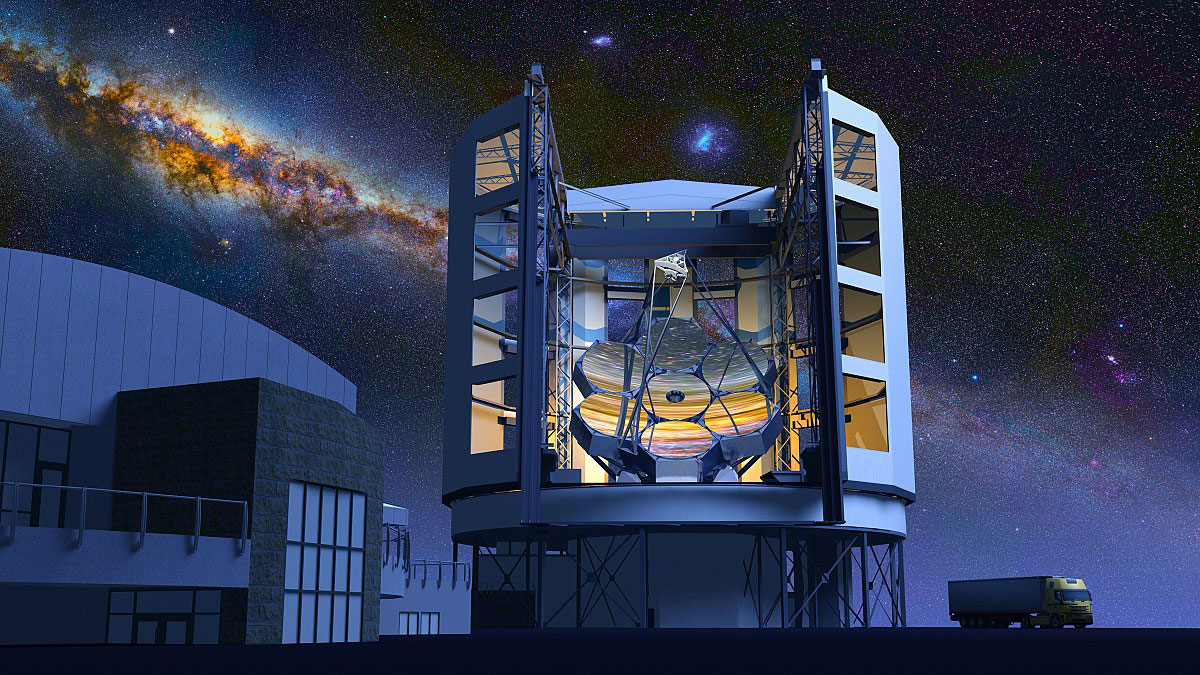 The Large Magellan Telescope is one of the giant telescopes under construction. It is scheduled to be completed in 2029, and the resolution of its images will be ten times that of the Hubble Space Telescope. However, it will start its work with four teams. This telescope has seven equal sections with a width of 8.4 meters, which form its primary mirror. These parts are symmetrically placed next to each other from the center. The total cost of this telescope is estimated at nearly one billion dollars. 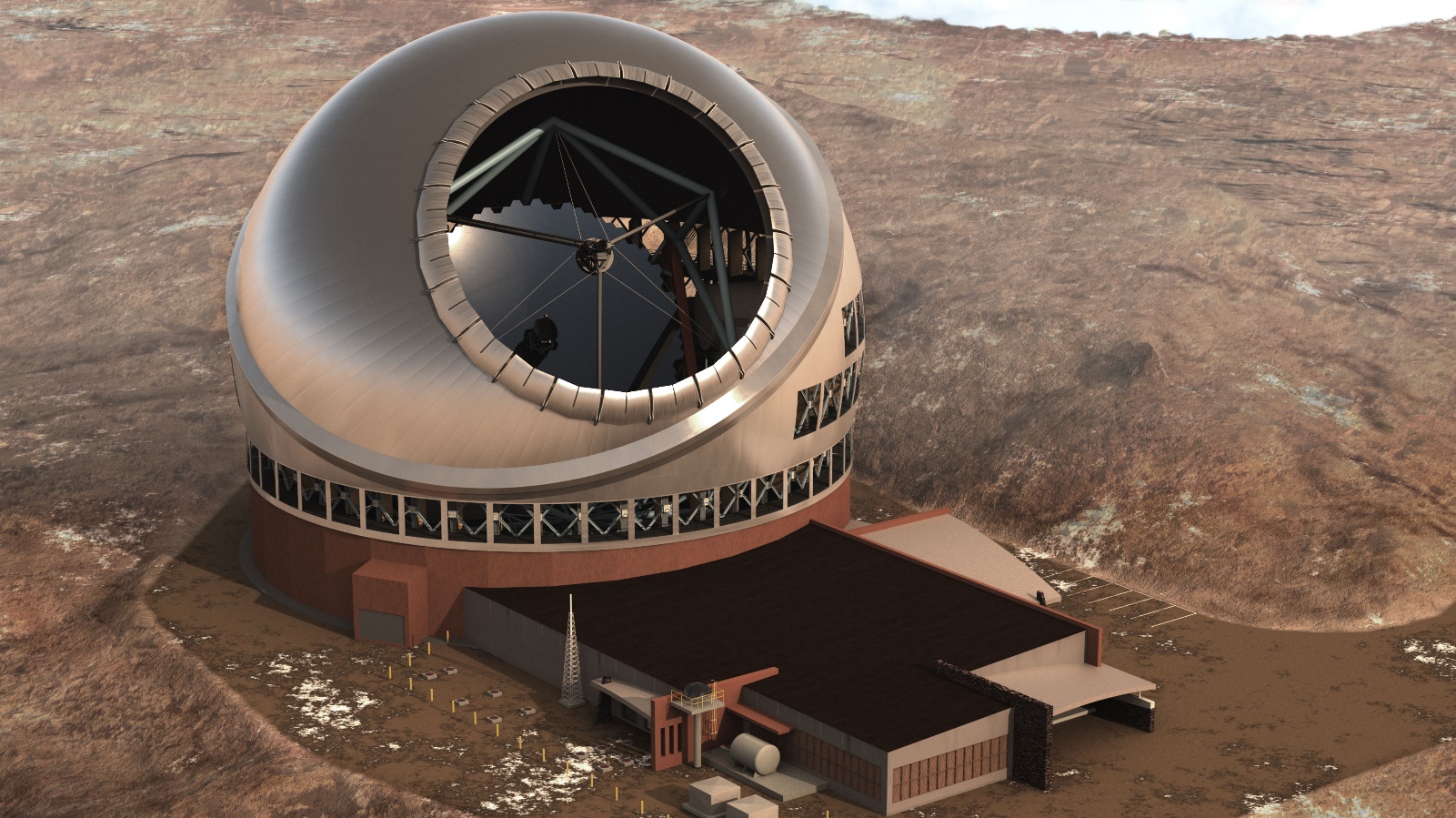 This telescope, located at an altitude of 4012 meters, will analyze black holes in the heart of the Milky Way and other galaxies. The name of this telescope comes from the size of its vast primary mirror, which consists of 492 hexagonal panels. There is a distance of 2.5 mm between each 1.44-meter mosaic mirror. 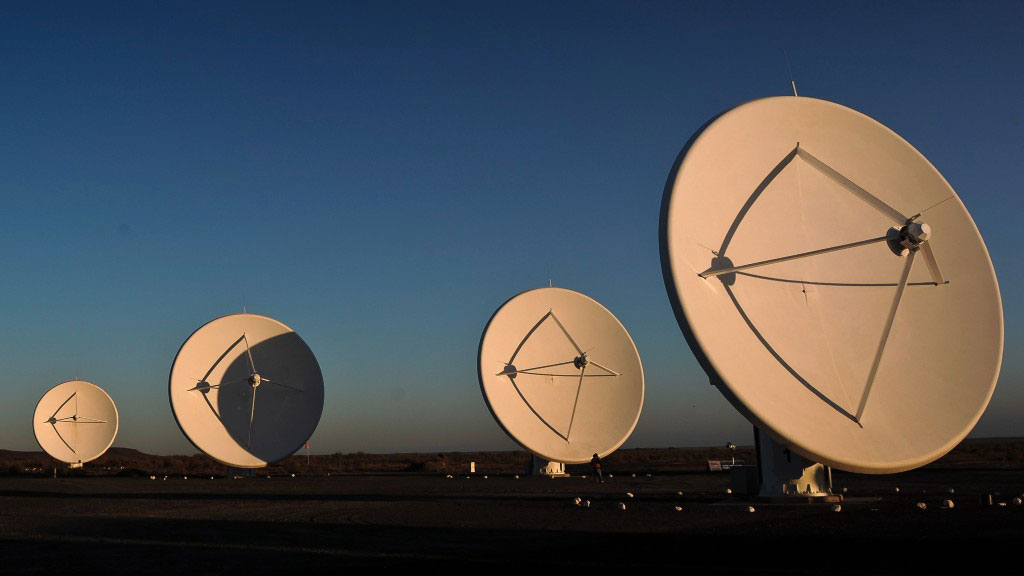 The SKA project is an international effort

Although the size of each square kilometer array telescope is not as large as previous projects, the scale of this structure is much larger. The location of this array is in the Karoo region of South Africa and the Murchison Shire of Western Australia. In Australia, which will be the most significant home of these telescopes, there will be 512 telescope stations, while 200 will be located in South Africa.

According to scientists’ estimates, the result of this project will be an array of telescopes with 100 times more accuracy than the best current observing sites, and the time to map the sky will be a million times faster. The project will be completed in 2028, and the arrays are expected to be used for five decades. 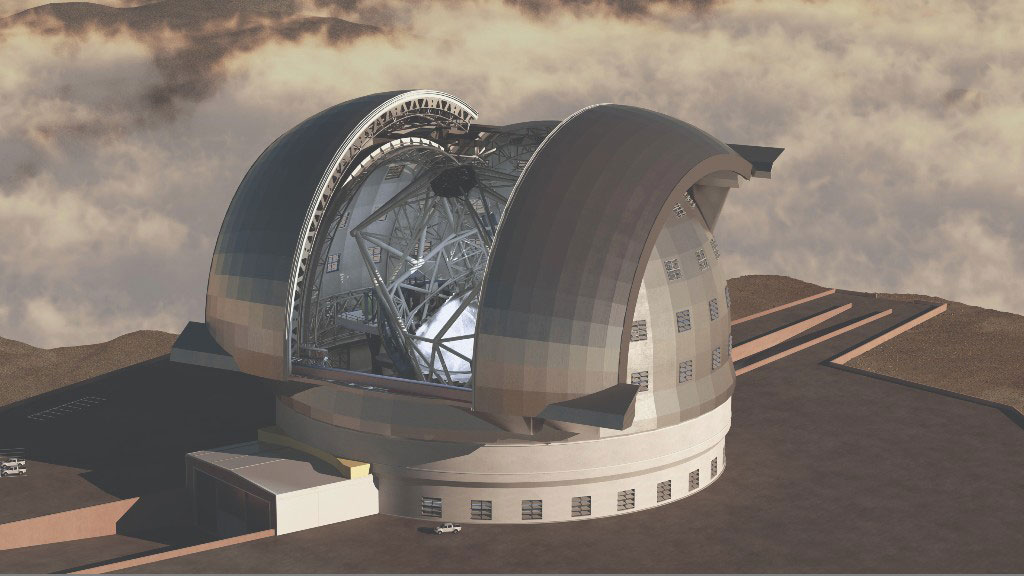 In 2017, the name of this telescope was changed from “European Very Large Array” to “Very Large Telescope.”

The Very Large Telescope (ELT), designed by the European Southern Observatory (ESO), will be completed in 2027. This telescope has ambitious goals, including discovering Earth-like planets, searching for extrasolar life, the analysis of supermassive black holes, and the world’s first galaxies with high depth and precision.

The ELT can collect 100 million times more light than the human eye due to its impressive mirror area of ​​978 square meters. This telescope has a huge rotating dome of 80 meters, whose approximate weight reaches 6000 tons. The strong foundations of this telescope were completed at the beginning of 2022.

Astronomers with advanced instruments can detect biomolecules and water near young stars. In addition to the massive 39-meter primary mirror, which consists of 798 hexagonal segments, the ELT telescope uses four other mirrors to improve image quality. The cost of the first phase of this telescope is estimated at nearly one billion euros. 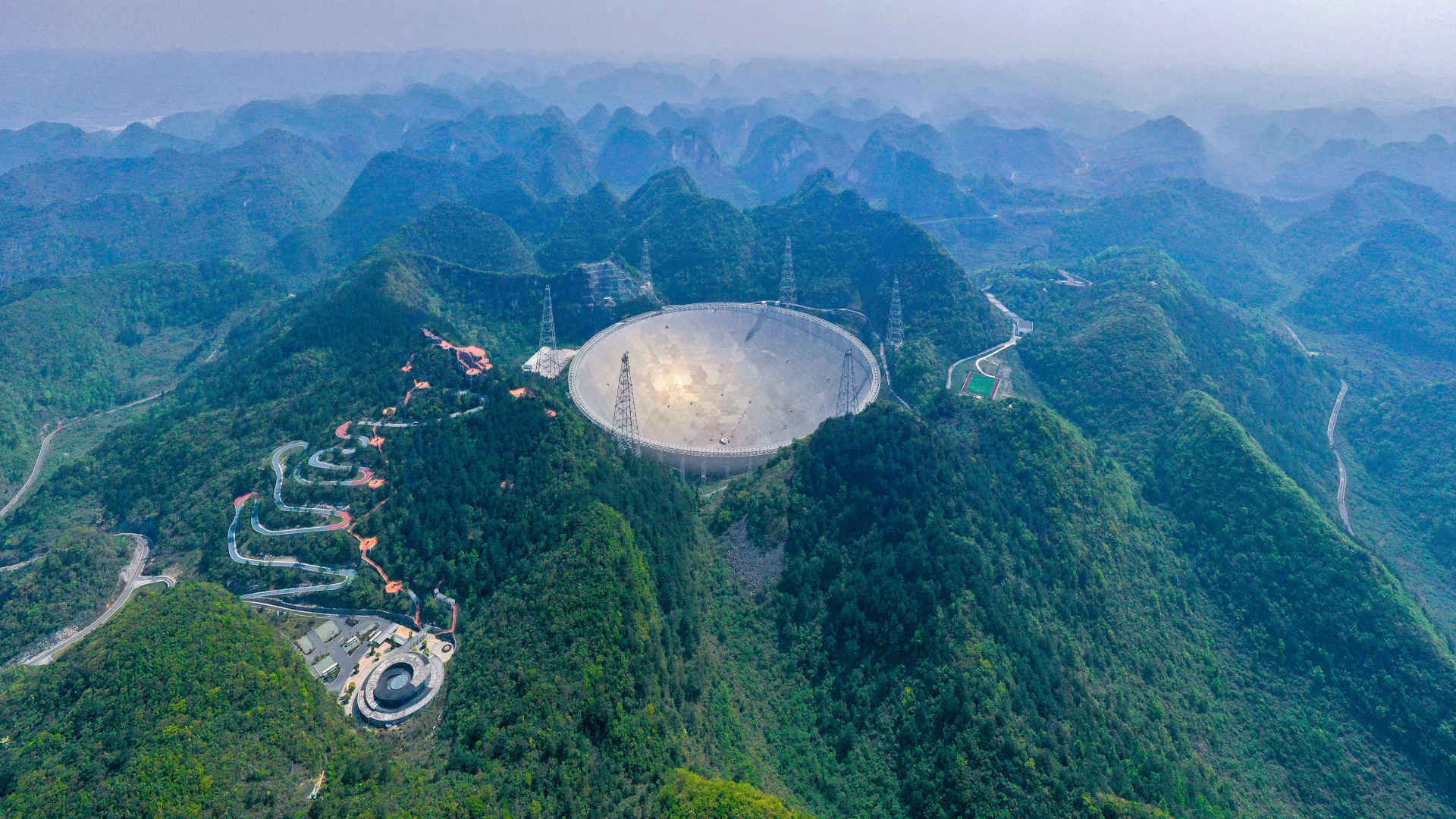 FAST telescope in the Guizhou region of China

The 500-meter Aperture Spherical Telescope (FAST) was inaugurated in 2020 and is currently the world’s largest single-dish ground-based telescope. This telescope’s accuracy is three times that of the famous Arecibo telescope, whose purpose is to discover the laws that govern the world. This radio telescope, with a diameter of 500 meters, is located in a natural basin in the beautiful scenery of southern Guizhou Province, China. The cost of building this telescope was 180 million dollars, and it took five years to make it.

The construction of the Fast Telescope, which the Chinese call Tianyan or the Eye of the Sky, began in 2011 and was completed in July 2016. This telescope requires radio silence up to a distance of 5 kilometers, so more than 8,000 people in eight surrounding villages were forced to leave their homes. Of course, this relocation was compensated by giving new houses and cash.