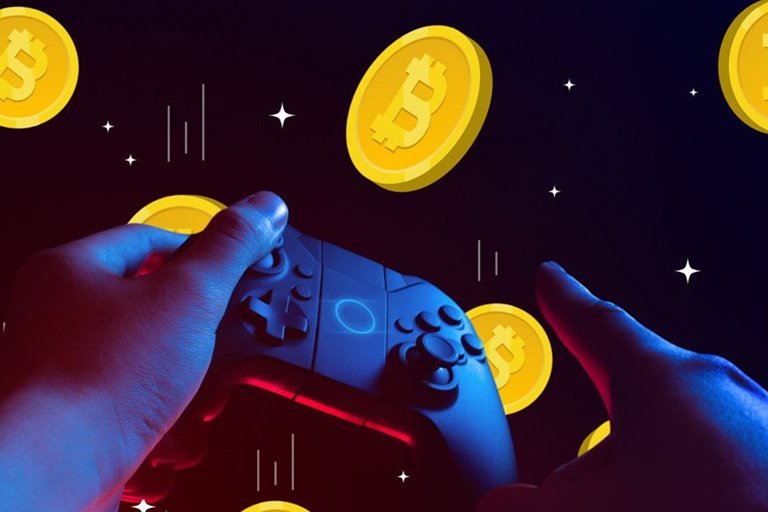 Making Money By Playing Games Is Very Common For Gamers Today; But For Non-Professionals, Cryptocurrencies Are A Real Opportunity To Monetize And Increase Profits.

Crypto Games, Making money from playing video games is a tangible and growing reality around the world; For example, large video game companies hire people to test the games for troubleshooting before they are released, and they are paid to do so; Or companies like eSport will pay millions of dollars in prizes by holding one-round championships for each winner.

On the other hand, with the advent of various cryptocurrencies and their blockchain, many companies and individuals have, and many stores and companies recognize payment through digital currencies to purchase their goods and services.

Many game companies have introduced blockchain-based games to keep up. Since the advent of online gaming, the industry has struggled with issues such as payment, security, and compatibility, and the use of blockchain technology and cryptocurrencies can be a solution to these concerns.

Blockchain is a reliable database for storing information about players’ assets and their value, and smart contracts make the gaming ecosystem transparent by integrating the entire process; Therefore, buying and selling in the game is done more efficiently, and the progress of the players is easier to track; This makes it impossible for users’ accounts to be cheated or hacked.

In this ecosystem, players can acquire unique digital assets by exchanging non-exchangeable tokens ( NFTs ) during the game and exchanging them as physical goods. They can have more control over their assets and play with more interest.

On the other hand, developers benefit from this, and by getting more people involved in the game, they get the funding they need for their projects. The combination of China’s blockchain technology and the online video game industry creates a win-win situation for both sides.

Crypto games that will introduce in this article:

What is a cryptocurrency?

Making money for gamers is now a proven fact. Still, for those who do not have much time to play a serious game or do not do it professionally, cryptocurrencies can be a real opportunity to earn money and increase profits.

Crypto games (blockchain-based games) are the same as video games; The difference is that during the game, from the entry stage (in some games) to get rewards to win battles or buy and sell and exchange these rewards to go to the following locations, digital currencies are used. Crypto games come in various styles, including RPG, strategy, action, first-person, or even card. Players can earn money in digital currencies, individually or in groups.

Crypto games are getting better and better over time, and given the great potential of this field, the future looks very bright for these games. This article will introduce the most famous cryptocurrencies and tell you what games to look forward to. If you want to have digital income while having fun and playing, join us in the following article:

Crypto Kitiz is one of the first blockchain-based cryptocurrencies. Players in this game can buy, raise and exchange virtual cats, and can even combine these cats to create valuable breeds. In this game, each cat has different traits, personalities, and appearances that can pass on to the next generation of cats. The token in the Crypto Kitiz game is Ethereum, and its blockchain is Ethereum. This game has a simple user interface and is very addictive. See the user interface of this game and its cats on the official website of Crypto Kitiz.

Sandbox game was first introduced for mobile in 2012, But in 2018 (1397), by entering the field of blockchain and using NFT‌, provided users with the ability to buy and sell or build digital assets in a three-dimensional environment. The sandbox is based on the Ethereum blockchain and uses three separate tokens: SAND, LAND, and user-generated. SAND is the primary token of the game, and LAND is used to display digital assets. In this virtual world, any user can design their ecosystem or create digital artwork and sell it in-game. You can see the Sandbox game space on its official website.

One of the digital currency gamesOxyinfinity is where digital currency can be invested. This game is based on the Ethereum blockchain and has two tokens: AXS and SLP. OxyAXS in this game is a government token and can be traded in exchanges such as Binance and is used to buy NFT in the game market. Infinity is derived from two games, Pokémon and Crypto Kitties, in which players can produce or purchase small and beautiful creatures called Axis. O start this game, you must buy at least three axes, the cheapest of which is worth 0.0421 Ethereum (about $ 79). the initial cost of starting the game is high, But it is a source of income for many people in developing countries. n Oxyinfinity, you get SLP if you win. LP tokens are used to generate more axes or sell to other players. Experience this game. Go to thistle the link.

Surrey is a football game with five-a-side teams based on Ethereum China Blockchain, in which individuals can buy, own and sell digital cards related to players from over 100 sports teams. It can say that these cards are digital versions of the same football nostalgia cards that some of us have experienced playing with in the past.

Each person can choose ten cards for ten different players to enter the game and choose their initial group; Form a team of five to participate in the competition, and by winning each match, more cards or prizes in the form of Ether digital currency.

Winning tournaments is one way to earn money in this game, and another way is to buy and sell the cards in it. Ach card belongs to a player in the real world, and only one unique card is generated for each player in each season.

The value of these cards is measured depending on the player’s performance in the real world. Or example, the unique card of Paris Saint-Germain player Killian Mbabane was purchased in late 1399 for more than 55,000 euros. Visit its website to see the cards of this game.

Gods Anchind (GU) is a card game based on the Ethereum blockchain, and players can take actual ownership of the cards and sell them or exchange them with other cards. Ome in-game cards are scarce and valuable. Ods game is a few people, and you do not need to pay to get started. The atmosphere of this game is through this link.

The hash Rush game has been introduced in the style of strategy and to earn money (Play to Earn). His game is made on the Ethereum China block and is available for personal computers. Layers in Hash Rush must build a base and protect their colonies and crystals from attacks. N this game, it is possible to mine crystals through Crypto Veins. Does not need to pay the initial fee to enter the contest, and the graphical space of the game is beautiful. The full version of this game is not yet available, But you can register through the Hashrush.com website to enter the gaming world after the release.

Splinter Land is a Chinese block-based card-fighting game called Steem‌and uses a token of the same name throughout the game. N this game, the focus is on collecting cards and battles. Higher-level winners will receive Steem rewards, and players can use the token to sell or exchange playing cards. See this link to enter the official website of this game.

Infinite Fleet is a multiplayer and space game located on the second layer (sidechain) of the Bitcoin blockchain and will be available by the end of 2021 (fall 1400).

During this game, players in the role of ship fleet commanders have the task of fighting aliens. The ship and weapons depot is updated, and it is possible to form a team. Great people like Charlie Lee (creator of LightQueen) and Adam Beck (CEO of Blackstream) have invested in this project. O view the official website of this game, refer to this link.

Neon District is a cyberpunk-themed role-playing game based on the Ethereum blockchain. The territory in which the game takes place is called Unity City, and players receive tokens as a reward for fighting negative characters in the city and gaining new and unique skills and assets. These tickets can be sold and exchanged in the form of ether ciphers. Due to the similarity of the Paligan and China Ethereum blocks, the game design company also intends to use the Paligan network.

Guild of Guardians is an Ethereum blockchain-based role-playing game that will be released in 2022 (1401). n this game, players unite to defeat monsters. Game designer Gods Anchind developed the game, and although it has not yet been officially released, many people have registered on its waiting list. Ubisoft supports it, and the game space has exciting graphics and design. Build of Guardians can be run on mobile and PC, and its official website address is available from this link.

Skywave is a card game developed by the Horizon Blockchain Games team, funded and supported by Alexis Ohanian, founder, and CEO of the Reddit platform, based on the Ethereum blockchain. N it, players fight against each other by collecting different sets of cards. These unique cards are offered at a fixed price, and players can sell or exchange them. His game can be run on mobile, computer, and web and is currently available in a trial version through the skyweaver.net website.

The upland game can only be run on mobile and is based on the EOS‌ blockchain. His game is similar to Monopoly, in which players can have their own virtual home with absolute ownership; So by buying a property in this game with the help of a smart contract, that property will belong to the player. n Upland, players can sell or exchange their property. Through this link, you can enter this virtual city.

Big TTimeis an RPG-style game developed by a startup called Big Studios for $ 21 million. The game will introduce in 2022 (1401), and due to the high cost of development, the history of the design team, and the combination of NFT with the traditional role-playing game in this game, many people are looking forward to it. Ormer developers of Call of Duty and Fortnite work in this startup. Follow the news related to this game from its official website.

What do you, the Zomit user, think about cryptocurrencies and making money by playing them? O you have experience in this field?

This article or section does not cite its references or sources. Here is a risk of losing capital in any investment, and the investor must, after studying and researching, make the final decision and take responsibility for the consequences.