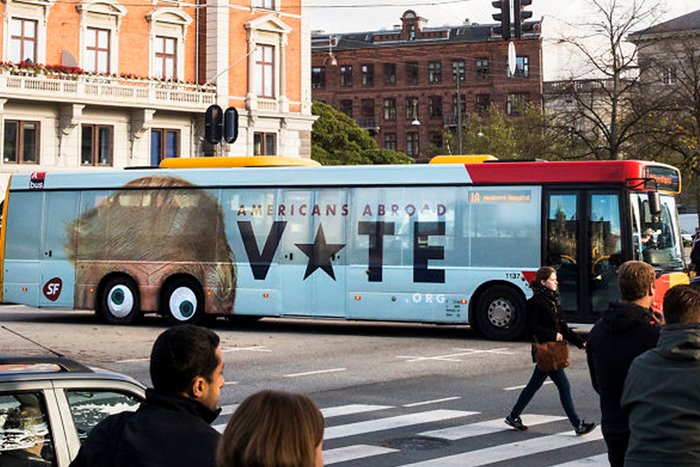 Advertising Using Buses Has A Very Long History. Since The Advent Of Public Vehicles And Buses, Bus Advertising Has Been Used As A Good Opportunity To Advertise And Market A Product And Convey Different Messages.

For most people, the bus is a means of daily transportation; However, the brains of the advertising world consider the bus a handy moving canvas for the most creative and effective environmental advertising.

Despite living in a digital world, savvy advertising agencies still believe that traditional and ambient advertising can be used to capture the attention of many people. Advertisements that have original complexity attract people’s attention and are also thought-provoking.

The reason for this is the effectiveness of advertising on vehicles, which cannot be ignored. Advertisements on the bus are visible to the passengers and drivers; this has made other advertising methods unable to compete with them.

The presence of more cars, traffic, and people’s desire to use public transportation means that the audience is more exposed to advertisements on public transit.

We have collected some examples of the most innovative and creative bus ads seen around the world in this article. Ads that are so attractive that sometimes you might even miss your bus.

Every morning when you leave home to shop, walk or go to work, you probably see a lot of environmental advertisements. Everywhere you look, one of the forms of ecological advertising is in front of your eyes. These advertisements can be seen on city screens, billboards, buses, shopping centers, and shops.

With a thumb calculation, we can guess that each of us sees hundreds of different environmental advertisements during the week; But in the meantime, there is a crucial question. Which advertising items will stay in our minds, and how many will we remember again in the future? It is unlikely that their number will be significant. For this reason, it is necessary for the experts responsible for advertising various companies to use the best and most effective sentences and images for their advertisements.

Bus advertising is a type of outdoor advertising considered one of the most effective. It can communicate with many people throughout the city and be effective. There are many reasons why people choose to use bus advertising to promote their business. For example, buses provide designers with better space for creativity, making the advertising message more lasting and effective in the minds of viewers ult, ultimately leading to more sales.

During the research conducted in this field, advertisements that are only focused on one point will have repeat audiences over time; Their only audience will be people who travel their daily route, not new audiences. Also, outdoor advertising options for billboards and signs, especially in big cities and essential and crowded parts of the town, are limited to the same space. Finally, people who pass by those parts of the city daily can see this advertising.

Because a bus passing through the primary and secondary roads of cities can introduce a product or company to people who may never even see city billboards, but bus advertisements allow various companies and organizations to bring themselves and their products to the most obscure parts of the city and be seen by all people. This means different audiences are targeted in the market of this advertisement every day. Also, bus advertisements will attract more attention due to their mobility in the city, and the audience will enjoy viewing the city’s moving shapes and images.

Bus ads come in different shapes and sizes and can be made available to all types of advertisers and their budgets. Advertisers can cover their message or advertisement in a big and bold way on a bus so that the ad encompasses all parts of the bus, even the empty spaces between its tires. Also, bus advertising is an efficient and economical use of existing infrastructure.

For example, advertising by buses may cost one-third of the cost to its customers compared to advertising billboards; Because billboards are costly and require massive structures that may even be placed in the wrong places with a minimal efficiency and are overlooked by the local community. However, buses can provide essential services to any segment of society and are more effective in this regard.

According to those responsible for such promotions, advertising can also be enhanced by creating experiences for consumers beyond just seeing a regular ad outside the bus. In addition, it is possible to make changes in the interior of a bus and provide memorable moments for passengers who intend to travel with that bus.

The critical thing in bus advertising is to change people’s thinking about what they are looking at. In other words, in doing an advertisement, make the bus look like something it is not. This way, you can use doors, tires, lights, and even passengers inside the bus to achieve a more creative result.

You should pay attention to who will see this bus on this route. How can environmental contexts be used to attract attention? In this direction, we must be careful that our advertisements are textually related to the space in which the bus is placed.

Kindness in global agriculture: stop the export of living things

It is necessary to create location-specific resources to communicate with consumers who view this location. By following these tips, not only will your bus advertising effects be more effective in grabbing consumers’ attention, but it will also get them to snap a photo of the bus that used a creative ad and share it on social media. This way, advertisers can gain more media value with organic online interaction and become more known on social networks.

Zoo in Australia: Before the zoo comes to you, you come to the zoo

In general, buses are not the only means of transport that can be used with advertisements everywhere. Other vehicles such as trucks, trains, subways, taxis, and even airplanes are also effective for advertising and cannot be ignored. However, this does not mean that all transport advertising is as creative, innovative, or effective as the one found on buses.

Window covering techniques and visual graphics, covering the entire bus, including windows and ample advertising space, make it easier for advertisers than other vehicles. This means advertisers and artists have much more flexibility when displaying their products or broadcasting their public service message on buses. They can use two different types of advertising; One for the windows and the other for the bus body. Two types of vinyl are used to print advertisements on the bus body; the vinyl for windows allows the passengers inside the vehicle to easily see the outside environment from the window on which the ad is placed.

The use of field advertising, such as the use of buses, has many advantages. The Office of Out-of-Home Advertising Marketing and Measurement in Canada claims that this type of advertising can quickly achieve high ROI. It will also increase viewer engagement and emotional connections.

The Canadian Marketing and Measurement Agency claims that consumers feel 33% more alert when out and about. In other words, outdoor advertising and marketing leave more profound and lasting effects. According to research in the United States, a bus whose body is completely covered with advertisements can generate about 70,000 purchase incentives per day.

The University of Alberta and Mediacom studied more than 300 out-of-home advertising campaigns in this regard. They found that the time of year has no effect on the effectiveness of advertising and that this type of investment seems relatively stable. The only practical point in advertising is its creative execution. This means that creativity is the secret to success and the key to your attention when advertising for transportation and buses. In other words, you cannot become famous and in demand with lazy and overly simple ad design.

According to them, literal ads that state facts or obvious things are the least effective. At the same time, advertisements with more mental creativity, shorter text length, and the larger size will have more impact.

Humans have a compelling graphic vision. Graphic communication with the surrounding environment creates a robust business environment. Environmental advertising is one of the most powerful options in this field. The bus has inherent omnipresence; in this regard, it can be used for many advertisements. The intrinsic feature of omniscience means that people unconsciously engage with the images and writings on the bus, which becomes a kind of epidemic. In advertising on the bus, the minds will be heavily involved in the subject matter. This method causes the viewer’s reason to be engaged for a longer time. This method is prevalent and helps to beautify the city. In addition, no disturbance will be created, and space will not be occupied. The biggest audience of this type of advertising is families.

Visa Wellington at the Culinary Festival

This type of advertising can increase the effectiveness of advertising campaigns due to the high point of environmental and outdoor advertising and ATL media, such as radio and television. When a person sees an advertisement for a product on an inner-city bus with a particular brand, he will realize its fame and popularity. In these cases, people say to themselves: This brand has been so widespread due to sufficient satisfaction and popularity, and in this way, it seems that you have followed the path of advertising and fame correctly. At first, the advertisements on the bus bodies were straightforward and uniform. However, it has been a few days since creativity has increased in this regard. Advertisements on the bus in different brands can be a purposeful step considering the price competition involved. Pay attention that buying a product with more knowledge will be more accurate and acceptable.

In addition, advertising in any field will fail if it is not accompanied by creativity. Suppose a particular brand initially uses a plan for advertising on the bus, and with time, different brands also use the same repeated program. In this case, the audience will no longer be attracted to those advertisements, and this negative energy will cause losses to that brand.

Using powerful colors and prominent labeling are new and modern creations in bus advertising. Using a readable writing font and avoiding exaggeration will also attract the audience more accurately to advertisements, and this issue can ultimately be fruitful. Using foreign ideas in advertising on the bus causes the innovative mind to take action. Sometimes the designs used will be unbelievable. The presence of three-dimensional and slightly scary structures makes the viewer want to take advantage of the brand. Using the correct and acceptable creativity, even on urban billboards, is particularly important. Advertisements on the bus should also be adjusted according to the product type.

In the end, it should be said that placing advertisements on vehicles is one of the best ways to promote a brand or company and increase product sales. Which of these ads do you think was more effective?