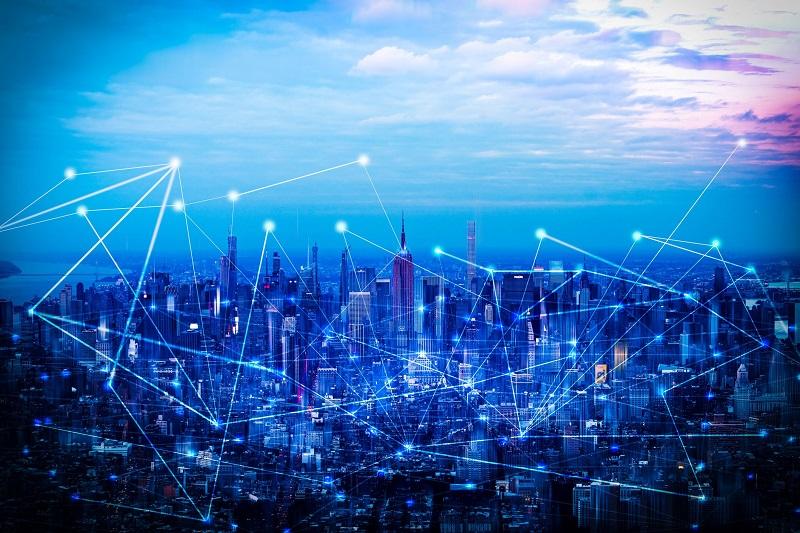 In The Internet, The Network Layer Is Used To Deliver Datagrams From The Source To One Or More Destinations.

If the datagram is sent to only one destination, we have a one-to-one delivery pattern called unicast routing.

If the datagram is sent to multiple destinations, we have a multicast routing, one-to-many delivery.

In communication networks, routing is possible if the router has a forwarding table to forward the packet to the next node in the path to reach the destination.

Unicast routing is done on the Internet with many routers and hosts and is based on hierarchical routing and in several stages using routing algorithms. In unicast routing, the packet is forwarded from source to destination and from one hop to the next through forwarding tables.

The Internet can be imagined as a graph to find the best route. To model the Internet as a graph, we can think of each router as a node and each network between a pair of routers as an edge. The Internet is modeled as a weighted graph where each edge has a cost. If a weighted graph represents a geographic region, nodes can be cities, and borders can be roads that connect cities. The weights, in this case, are the distances between cities. However, in routing, the cost of an edge is different in different routing protocols. Suppose there is a cost for each bite. If there are no edges between nodes, the price is infinite. Figure 1 shows how the working mechanism of the Internet is drawn in the form of a graph.

Routing with the lowest cost

When we model the Internet as a weighted graph, one way to interpret the best route from an origin router to a destination router is to calculate the least cost between the two points. In other words, the source router chooses a path to reach the destination router so that the total cost of the route is the lowest among all possible ways. Figure 1 shows the best path between A and E is ABE with cost 6. Each router must find the least-cost path between itself and other routers to send the packet to the destination in the shortest time.

If there are N routers on the Internet, (N-1) represents the least-cost paths from each router to each other. We need N×(N-1) low-cost courses, so that network bandwidth is not wasted. For example, if we only have ten routers on the Internet, we need 90 low-cost routes. A better way to visualize these paths is to combine them into a low-cost tree. A low-cost tree is a tree with the source router as the root, which is visited by all nodes in the network, and where the path between the heart and each node is the shortest.

A tree will have the shortest path for each node in this case. In the real world, we have N least-cost path trees for the entire Internet. However, some of them are more important. Figure 2 shows seven low-cost trees used on the Internet.

Minimum cost trees for a weighted graph can have several important properties.

Low-cost trees and forwarding tables are vital components the network protocol uses to send packets at the lowest cost. Routing algorithms are another essential component that plays a crucial role in this field. Until now, various routing algorithms have been designed. These algorithms differ in interpreting the least cost and creating the most diminutive cost tree for each node.

Distance-Vector (DV) routing is used to find the best route. In distance vector routing, the first thing each node creates is its least-cost tree with the basic information it has about its nearest neighbors. Incomplete trees are sent and received between neighbors to gradually become more and more complete trees usable on the Internet. In distance vector routing, a router continuously informs all its neighbors about what it knows about the entire Internet, even if this information is incomplete. Before we show how low-cost incomplete trees can be combined to form complete trees, we need to address two critical topics, the Bellman-Ford equation and the concept of distance vectors.

In distance vector routing, we consider updating the available minimum cost with the lowest cost via an intermediate node, such as z, to see if the second node is shorter. In this case, can write the equation in the following simpler form:

The graphic representation of the Bellman-Ford equation is shown in Figure 3.

A low-cost tree combines paths from the tree’s root to all destinations.

These paths are graphically connected to form a tree.

Now we know that a distance vector can represent the least-cost paths in a least-cost tree, but how does each node on the Internet create the corresponding vector. When it enters the operational phase, each node in the Internet creates a direct distance vector with minimal information obtained from its neighbor node. The node sends hello messages to its neighboring interfaces to discover the identity of its neighbors and the distance between itself and each neighbor. Next, inserting the discovered lengths in the corresponding cells creates a simple distance vector and considers the value of the other cells to be infinite. Do these distance vectors represent low-cost paths? It looks like this at the beginning. At the beginning of the work, the initial path is considered the least expensive when we only know the distance between two nodes. However, as the information is complete, a more accurate understanding of the least costly path is obtained gradually. Figure 4 shows the distance vectors that the Internet uses. Pay attention that these vectors are created asynchronously. 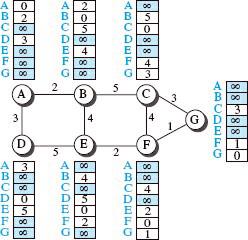 These elementary vectors cannot help the Internet network to send a packet optimally. In Figure 4, node A assumes it is not connected to node G because the corresponding cell shows the lowest infinite cost. To improve the performance of these vectors, nodes on the Internet must help each other by exchanging information. After each node has created its vector, it sends a copy of the vector to all its nearest neighbors. After a node receives the distance vector from its neighbor, it updates its vector using the Bellman-Ford equation (case 2). 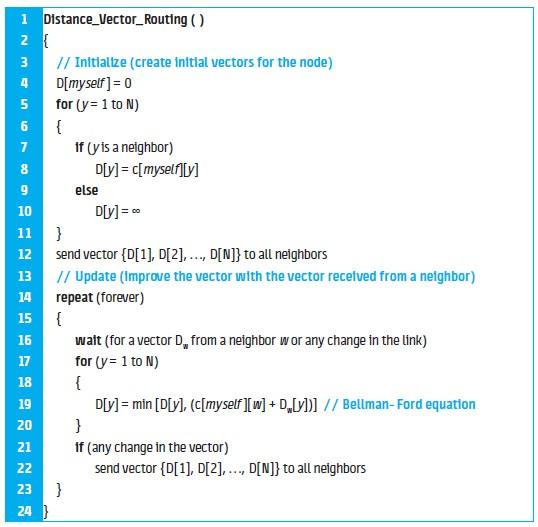 Lines 4 to 11 initialize the node vector. Lines 14 to 23 show how to update the current vector after receiving a new vector from a neighbor. The for loop in lines 17 through 20 allows all entries (cells) in the vector to be updated after receiving the new vector. Note that the node sends its vector in line 12 after initialization and line 22 after updating.