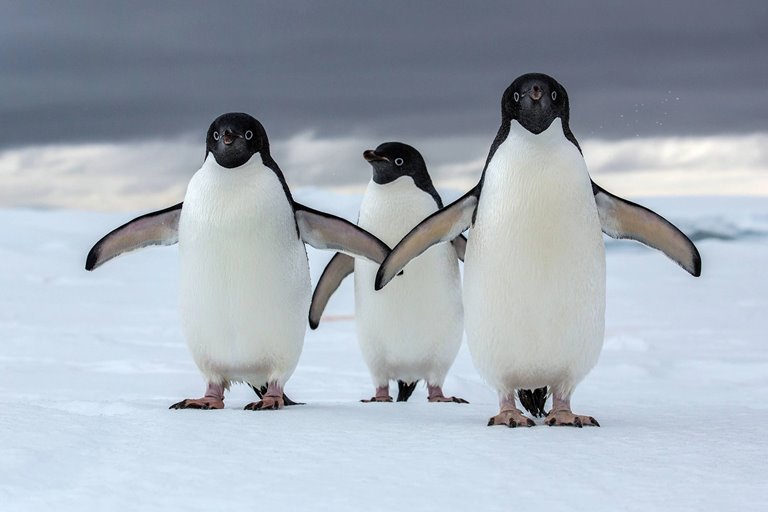 More Than 60 Million Years Ago, Penguins Abandoned Flight To Swim. A New Analysis Has Revealed How Penguins Evolved.

Penguins are perhaps best known for being flightless birds whose wings help them navigate the frozen waters of Antarctica. But these birds lost their ability to fly about 60 million years ago, long before the formation of the Antarctic ice sheet, and became birds with high swimming skills.

A new study of fossil penguins and the genomes of living and recently extinct penguins has revealed a series of genetic adaptations these birds acquired to enable them to live an aquatic lifestyle. These findings suggest that penguins adapted to survive in unfavorable environmental conditions over millions of years.

The oldest penguin fossil is from 62 million years ago, said Daniel Kasepka, one of the study’s authors and a paleontologist at the Bruce Museum in Greenwich, Connecticut. At that time, penguins did not have the power to fly, although they looked very different from today’s penguins.

They had long legs and beaks, and their wings were still more wing-like than fin-like. Early penguins likely evolved from a parrot-like creatures that could still fly, Kasepka said.

(This flying ancestor has yet to be discovered in the fossil record, so it’s unclear exactly when penguins lost the ability to fly.)

Over time, Kasepka said, evolution produced many penguins, from penguins with long spear-like beaks to red-feathered penguins and birds that were a foot or two taller than today’s largest penguin species, the emperor penguin (the emperor penguin is about reached 1.1 meters).

In the new study, the researchers examined the fossil evidence, the genomes of living penguins today, and the incomplete genomes of penguins that became extinct within the past few hundred years.

The researchers’ findings show that penguins originated in an area near present-day New Zealand 60 million years ago and dispersed to South America and Antarctica before returning to New Zealand.

Kasepka said most species alive today diverged from each other about two million years ago. During that period, the Earth went through cycles of glacial and interglacial periods, during which the polar ice sheets periodically expanded and then retreated.

The ice advance drove the penguins northward and probably separated some populations, enabling them to follow their evolutionary paths for about 100,000 years. As the ice retreated, the isolated penguins evolved into different species.

Despite all the changes penguins have undergone, their rate of evolution is slower than that of all other birds, researchers reported in the July 19 issue of Nature Communications. Kasepka said this is surprising and has yet to be explained.

While the evolution of penguins may be relatively slow, development has provided them with many adaptations for life in and near the sea. It has caused the penguins’ wings to stiffen, making them look like fins. They share genes with other flightless birds that probably shortened their wings. Penguins also have unique genes that may have turned many of the wing muscles of their ancestors into tendons.

The researchers also found mutations in genes associated with calcium storage that may contribute to dense bones, helping the penguins to dive into the water.

Evolution has made many other changes in penguins, like fat storage and temperature regulation genes. One interesting finding was that penguins lost several genes associated with the digestion of crustacean exoskeletons early in their evolution.

It shows that penguins’ diet was focused on prey such as fish and squid.

But the expansion of the ice sheets created an ecosystem in Antarctica that was rich in krill (small crustaceans). For penguins, one gene (the CHIA gene) remained, enabling them to digest crustaceans. “If this gene weren’t there, maybe penguins would have trouble digesting krill,” Kasepka said.

Kasepka warned that about 75 percent of all penguin species that have ever lived are extinct, and climate change may push even more species to extinction. It is especially true for the emperor penguin ( Aptenodytes forsteri ), which has a unique lifestyle and reproduces on sea ice. If the sea ice melts, emperor penguins may have trouble finding breeding grounds.

At the other end of the spectrum are the little penguins living on the Galapagos’ rocky islands. These birds are so far from other lands that they will have nowhere to escape if their tropical habitat gets too hot.

“These animals are sensitive to environmental changes and in many cases are at risk of extinction,” Kasepka said. “In other cases, they may become much more vulnerable over the next few decades.”