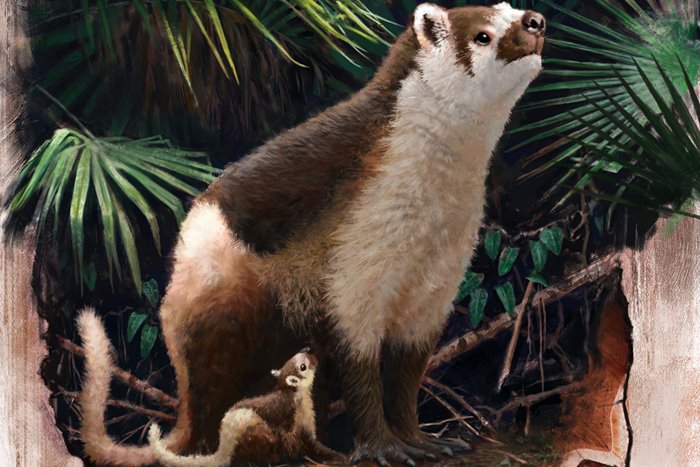 The Extinction Of The Dinosaurs Left An Ecological Void That Large Mammals Quickly filled. But How Did Our Ancient Ancestors Grow In Size So Quickly?

Roughly 62 million years ago, just four million years after an asteroid the size of Mount Everest hit Earth and ended the age of dinosaurs, strange creatures with toe-like feet appeared as the first large mammals to roam the planet. These animals, which were about the size of large dogs, became much larger than the small, insectivorous, and shrew-like mammals that existed before the space rock’s impact.

Now scientists think they’ve finally figured out how those creatures got so much bigger than their tiny relatives. In a new study published on August 31 in the journal Nature, researchers analyzed the fossilized teeth and bones of the Pantolamda batman, a large, extinct mammal that weighed 42 kilograms at maturity.

Gregory Funston, the lead author of the study and a former researcher at the University of Edinburgh who now works at the Royal Ontario Museum, was quoted by LiveScience as saying that those creatures were probably slightly larger than the examined specimen; As a result, their weight exceeded 45 kg.

“Mammals didn’t get any bigger than a badger during the entire Mesozoic [252 to 66 million years ago],” Funston adds. As a result, Pantolameda’s size was two or three times this size. That 45kg seems like a lot considering that those mammals lived only four million years after the T-Rex went extinct.

But what was the secret of their impressive size?

According to the new study, P. batman likely evolved to give birth to large, highly developed babies, similar to the babies of modern-day giraffes and hippos ready to walk when they emerge from the womb. For P. batmodon offspring to be prepared to walk quickly, they were probably first carried in their mother’s womb for about seven months and fed on the placenta.

“Nowadays, placental mammals appear to have longer gestation periods that result in larger, more developed babies,” said Gemma Louise Benevento, a postdoctoral researcher in macroevolutionary paleobiology at the Zenkenberg Center for Climate and Biodiversity Research in Germany, who was not involved in the latest study. They are unique among groups of mammals; “But it is not known when in their evolutionary history placental mammals evolved to have longer pregnancies.”

According to evidence presented in the new study, 62 million years ago, P. batman could have been pregnant for several months, Benevento tells LiveScience. This reproductive strategy probably helped a variety of paired mammals to become very large after the extinction of the non-avian dinosaurs. 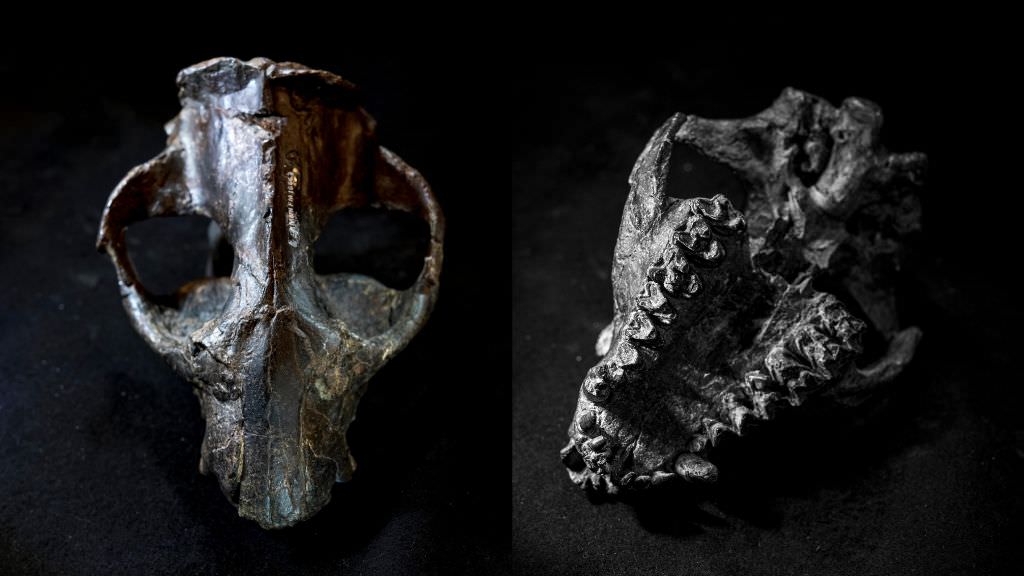 These photos show Pantolameda’s skull. The image on the right shows the animal’s teeth and the sharp ridges and grooves used to chew plant material.

How did mammals get so big?

Physically, P. Batmudon resembled a hybrid of several modern mammals that still exist today. This animal had a long, narrow tail and legs that resembled human hands and was complete with fingers and nails.

Notably, P. ba “It was like a dog in some ways and a bear in other ways,” says Funston. The model did not have a relatively large head to match its bulky body, A characteristic showing that his ancestors’ body size had increased before the increase in their brains. New research suggests that this evolutionary pattern of “strength before brain enlargement” can be seen in many placental mammals that emerged after the end of the Cretaceous extinction.

To learn more about P. batman’s life history, Funston and his colleagues analyzed 12 specimens of this strange mammal, including 23 bones and a mix of 22 teeth from adults and juveniles. All fossils originate from the San Juan Basin in New Mexico, Where paleontologists previously discovered a bone bed or a stone layer full of fossils. Most of these fossils belong to P. Batmudon.

Sampling all the fossils from a single bedrock has a slight advantage, Funston says Because it shows a single society at a time. By taking samples from individual animals that were approximately 2 to 11 years old at the time of death, the research team could estimate how fast these animals grew and how long they lived.

In addition, by looking for specific chemical traces in the teeth and bones of the animals, the authors of the study were even able to determine the period of carrying each animal in the womb, the time of birth, and the period of receiving milk from the mother.

This type of dental analysis had only been on modern animals and some mammal fossils dating back 2.6 million years. Still, no one had ever required this procedure on an animal as old as Pi Batmudon.

The technique takes advantage of the fact that as teeth grow, the hard outer enamel and underlying dentin tissue are densified daily in layers similar to the growth lines of a tree. In between these growth rings, a distinct “birth line” appears in both adult and baby teeth, despite having a slightly different position in the tooth structure. In addition, cementum, the hard tissue covering the tooth’s root, acquires a new layer yearly.

The birth line contains a high zinc concentration; shortly after birth, mammalian mothers produce special nutrient-rich milk called colostrum, which includes a large amount of this mineral. Then, after the mother stops producing colostrum and starts producing natural milk, the birth line gives way to layers of dental tissue impregnated with a large amount of barium. Like calcium, this element is added to teeth and bones during breastfeeding.

By taking thin slices of P. batman teeth (thin enough for light to pass through), the researchers could distinguish these distinct lines of zinc and barium. The analysis showed that P. batman experienced pregnancy for over seven months and only nursed their babies for one to two months. Based on the bone analysis, Funston says the cubs weighed about 9 kilograms by the end of the lactation period. 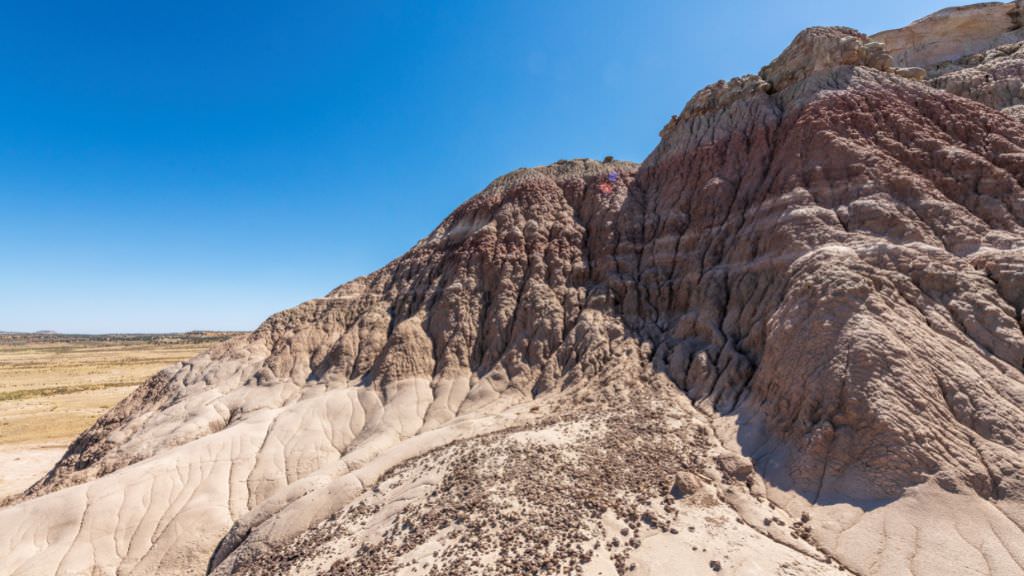 This photo shows the exact location where found the analyzed samples. This area is what paleontologists call a bone bed, Where many individuals of one or more species are located in the same layer. Specimens from this area include very young and ancient P. batmudons.

It probably had fur all over its body, its eyes were open, and a mouth full of teeth. Shortly after birth, the animal’s growth rate, as recorded in its bones, was so rapid that it probably reached sexual maturity within the first year of life. According to the study, most pi batmodons died between 2 and 5; However, the oldest person survived until he was 11.

“Most of the specimens we have died at about 3 or 4 years of age,” Funston says. “As a result, it is swift compared to the lifespan of similarly sized wild mammals.”

If this strange combination of dog and bear carried its offspring for long periods and then gave birth to giant cubs, other paired mammals may have been doing the same. Funston says this mode of reproduction could explain how mammals suddenly grew in size after the dinosaur-killing asteroid hit Earth.

Benevento says the dental analysis used in the study can shed new light on prehistoric life if applied to more fossils.

“The authors have shown that it is possible to directly measure changes in the teeth of ancient mammals dating back more than 60 million years. Can infer, From these data, the length of gestation, age at weaning, and time of death, ” Benevento adds. “Teeth are abundant in mammalian fossils, so applying this technique to Mesozoic and Cenozoic [66 million years ago to present] mammal fossils provides exciting new opportunities.”

“In the future, I hope to see this technique applied to mammal groups older than the Mesozoic, if possible,” says Benevento.