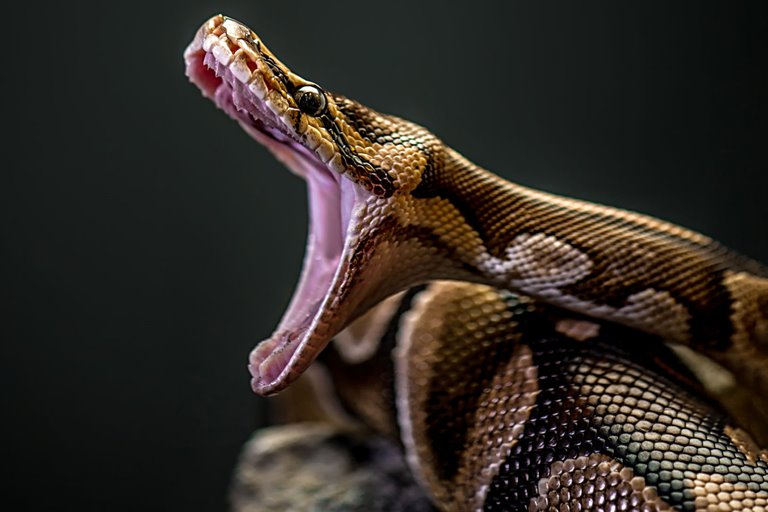 A Group Of Researchers Unexpectedly Found The Largest Burmese Python In The US State Of Florida, Weighing Approximately 100 Kg, In The Everglades Area.

Late last year, a team exploring the dense vegetation of flat pine forests in the Orglides, Florida, USA, came across an unexpected scene that no one had seen: a snake weighing nearly 100 kilograms.

The 100-kilogram snake, more than five meters long, was the enormous Burmese python found in Florida and set a new record. The Southwest Florida Department of Natural Resources says the form belonged to a 64-kilogram snake in 2016 before the new snake was discovered. The 100-kilogram snake had 122 eggs inside to set another record in Florida. Says Ian Bartoszek, a senior member of the 100kg snake discovery team:

Finding this snake is an entirely new thing for us. We do not consider pythons giant snakes unless they weigh more than 45 kg. So to describe the 100 kg snake, we need a new explanation.

The men attached a tracking device to the male snake and left it in the wild to look for a suitable mate. To catch the snake, the researchers had to get to the place at the right time and from the right angle. One of the team’s trainees, Kyle Findley, was able to dodge a blow that came close to hitting the body of a giant python, But biologist Ian Sterling was not very lucky; Because the 100-kilogram python with its retracted tail hit the biologist hard.

When the team members were able to hold the snake well, Ian Sterling put the snake on his shoulder and carried it to the van. “This python fought us well,” Sterling told a news conference. According to the New York Times, the team, a more prominent member of the organization, has been hunting pythons for nearly ten years to protect native species in the Everglades ecosystem. 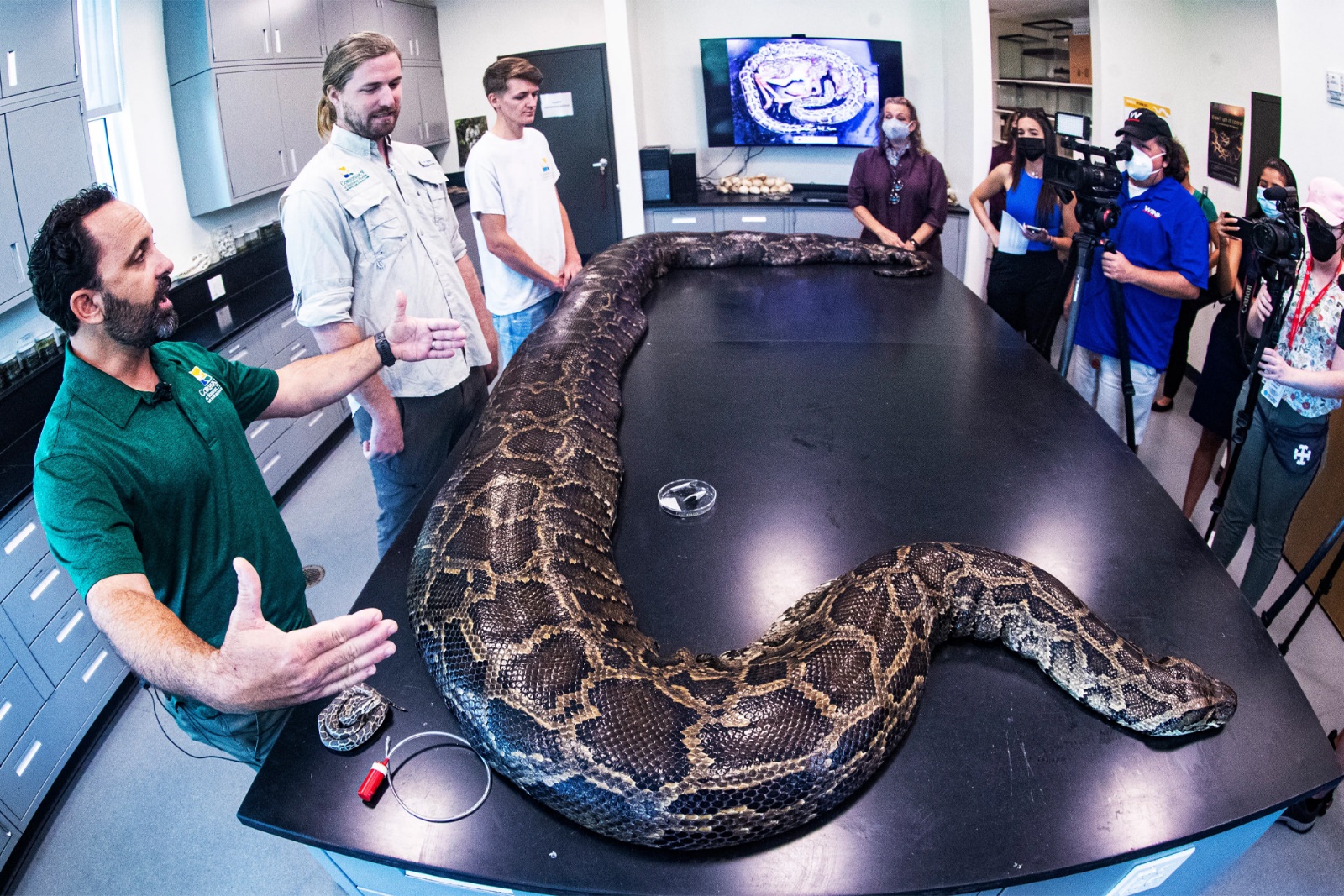 Burmese pythons are initially a species native to Southeast Asia and actively threaten flora and fauna of the Florida ecosystem. These snakes have been able to grow well in the Florida area.

The Burmese python has become the predator of many other animals, mainly white deer, found in forest areas throughout the United States; Because deer populations are declining, this has jeopardized the survival of the Florida deer, which feeds on deer. The Florida Mountain Lion, a subspecies of the Florida Lion (another Florida state animal), is now in danger of extinction.

Ian Bartoszek says he and his team members were shocked to find the first 45-pound python in Florida in 2014; Because of the 45 kg python sample is among the giant snakes of this species. The size of the new snake indicates that Burmese pythons have been able to continue feeding on Florida native species. Burmese pythons grow with increasing food intake, and their growth does not necessarily depend on age.

Imagine how many other snakes close to this snake live in the wild. There may be even more giant snakes in the Everglades. How do you think a 100 kg snake came to be in such a situation?

The Florida 100-kilogram snake was captured in December 2021, and team members waited for the breeding season to end in March 2022 (March 1400 and April 1401) and then began measuring and researching captured snakes.

The team usually uses male snakes, and to find a 100-kilogram python, they used a snake that they called a debtor. Thanks to male snakes, researchers can discover female snakes in hard-to-reach places. Snake hunters attach a particular tracking device to the male snake’s body and focus on the areas where the snakes migrate during the breeding season. The breeding season of snakes lasts from November (November and December) to March (March and April). 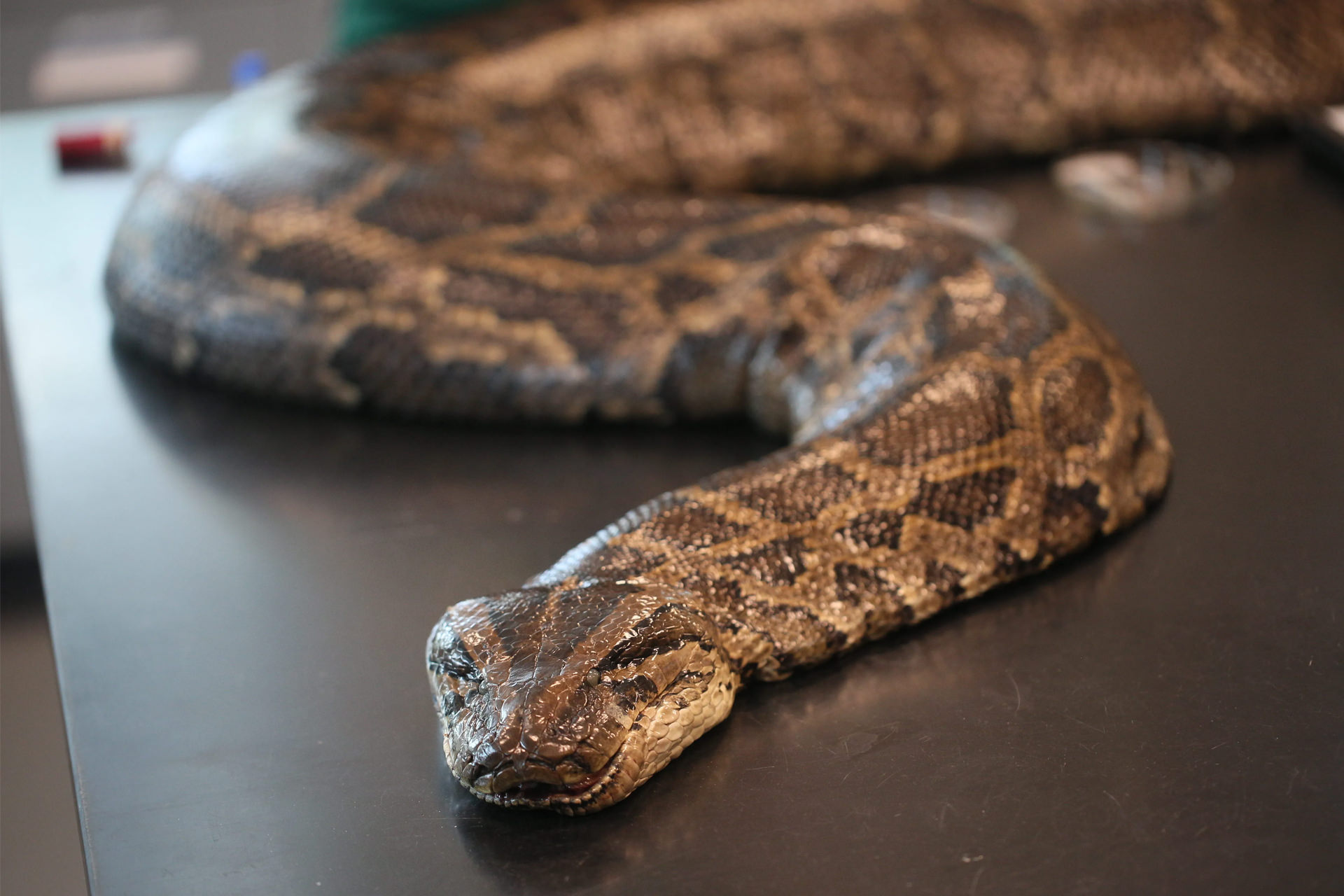 Searching for pythons is like trying to track down criminals, and at times it even looks like a crime scene; Because researchers look at the stomach contents of pythons. However, members of the snake-hunting team say they have a lot of respect for these carnivores. Ian Bartoszcz says:

Snakes are exceptional animals, and it is not their fault that they are here, But we understand the dangers of their presence.

Makila Spencer, an environmental activist and coordinator of the Python Hunting Program says the Florida Fish and Wildlife Conservation Commission is also working to reduce snake populations. The organization recruits applicants and teaches them how to hunt snakes. He even uses police dogs to find the snake.

The state of Florida is looking for new ways to improve the python detection process; Because these snakes are very skilled in camouflage and inhabiting remote areas. The Florida Fish and Wildlife Conservation Commission conducts a yearly summer scan to encourage people to hunt pythons for money. The Python Hunting Challenge will be held in Florida from August 5 to 11, 2022 (August 14 to 20, 1401). “We must try several ways to control these animals,” says Makila Spencer.

In the 1980s, the pet industry introduced pythons to the Everglades; But the sale of these snakes was declared illegal in 2012. People who buy pythons do not know how to care for them when they grow up. In this context, most people decided to leave snakes in the wild.

The Burmese python has since taken over the position of the wide-nosed Florida crocodile as the top hunter in the Everglades.

Burmese pythons are endangered in parts of Southeast Asia, But the snakes that made their way to Florida could not be returned to their original home; Because these snakes are genetically adapted to their new environment.

As pythons occupy more territory, the population of raccoons, rabbits, ostriches, birds, snout crocodiles, deer, and leopards in the lagoons has declined. Pythons are amazing animals, says one researcher, But they are the worst possible thing for the Eagles.

Covering 1.5 million acres of land south and southwest Florida, the Everglades is a unique freshwater ecosystem surrounded by tall, jagged grass and a slow-moving river in the wet season. Habitats in this area include cypress swamps, wet meadows, and mangrove forests. You can find many birds, mammals, reptiles, and plants in this area.

The Burmese python is just one factor that endangers this valuable area. Water pollution, rising sea levels, and the development of cities in the valley, along with other invasive species such as the Tego lizard and sugarcane toad, are other threatening factors.